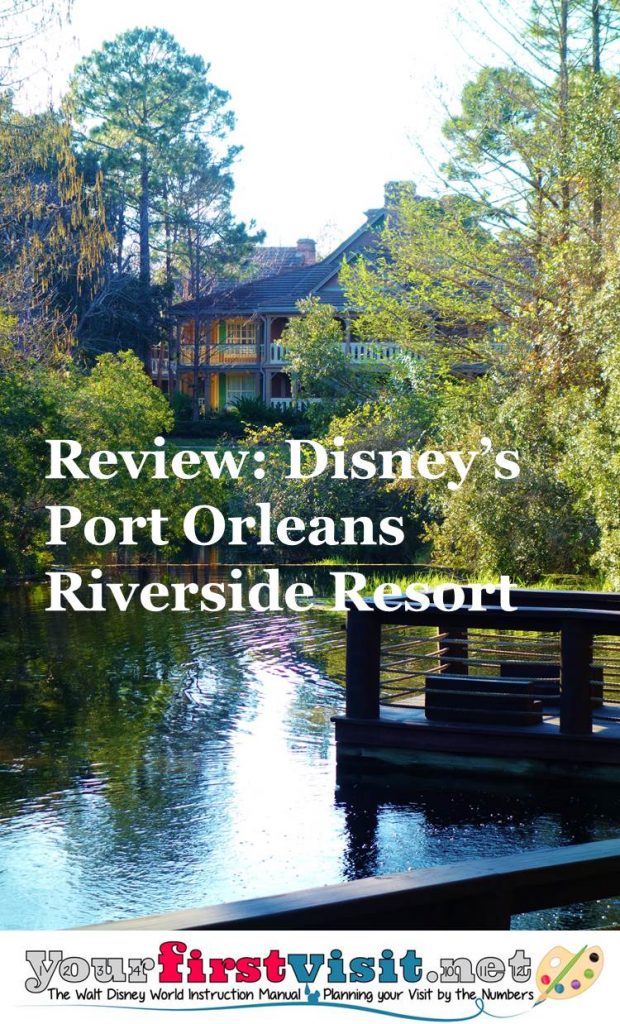 Note: guests at Disney’s Port Orleans Riverside Resort are eligible for Disney World’s Early Entry program, and for early access to its paid individual system for access to certain rides, but NOT for its Extended Evening Hours. 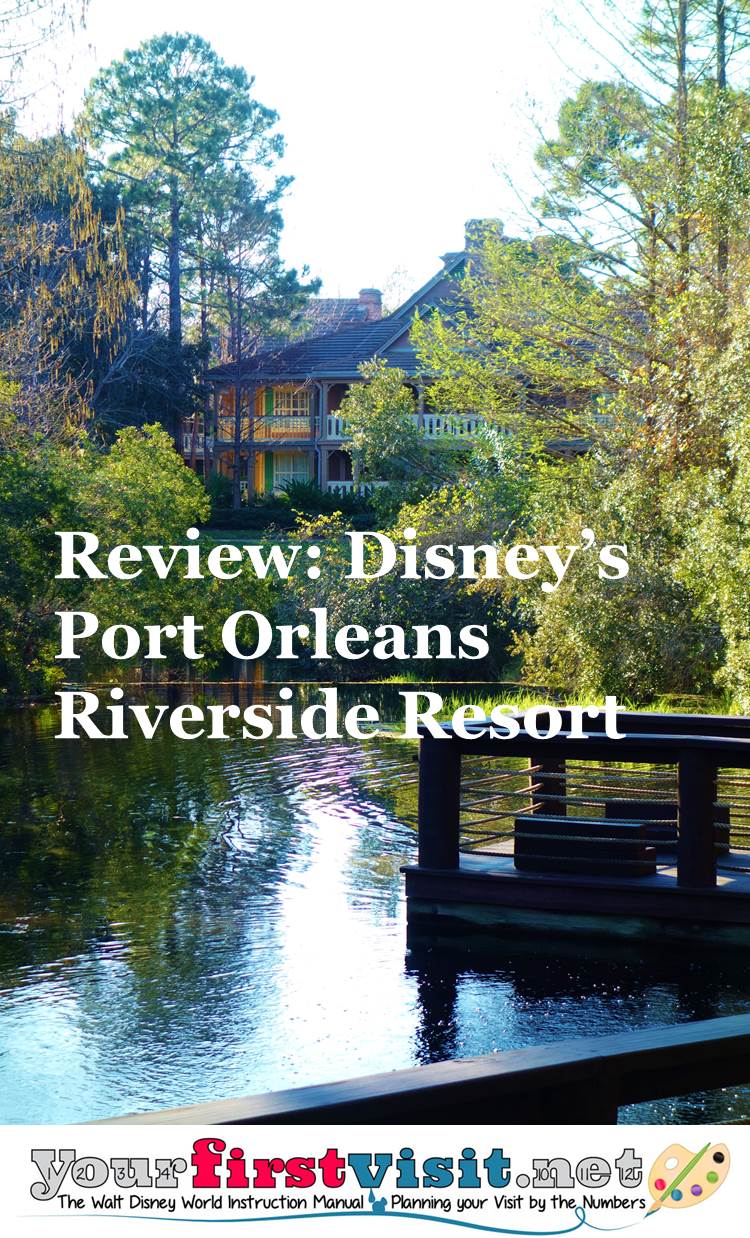 I’ve stayed at Riverside eleven times since I started this site, most recently in September 2019. These visits confirm that Disney’s Port Orleans Riverside Resort remains the third best of the moderate resorts for first time family visitors.

(For what the moderates provide, and how they compare to the other Disney World resort classes, click here)

You can have a wonderful visit at any Walt Disney World resort.

However, this site recommends that first time visitors to Walt Disney World avoid the moderate resorts, while noting that these resorts are wonderful for visits after the first. (See this for why.)

So I stay in them all–in 40+ different moderate rooms, eleven of them at Port Orleans Riverside–and publish reviews of each.

This review has nine pages 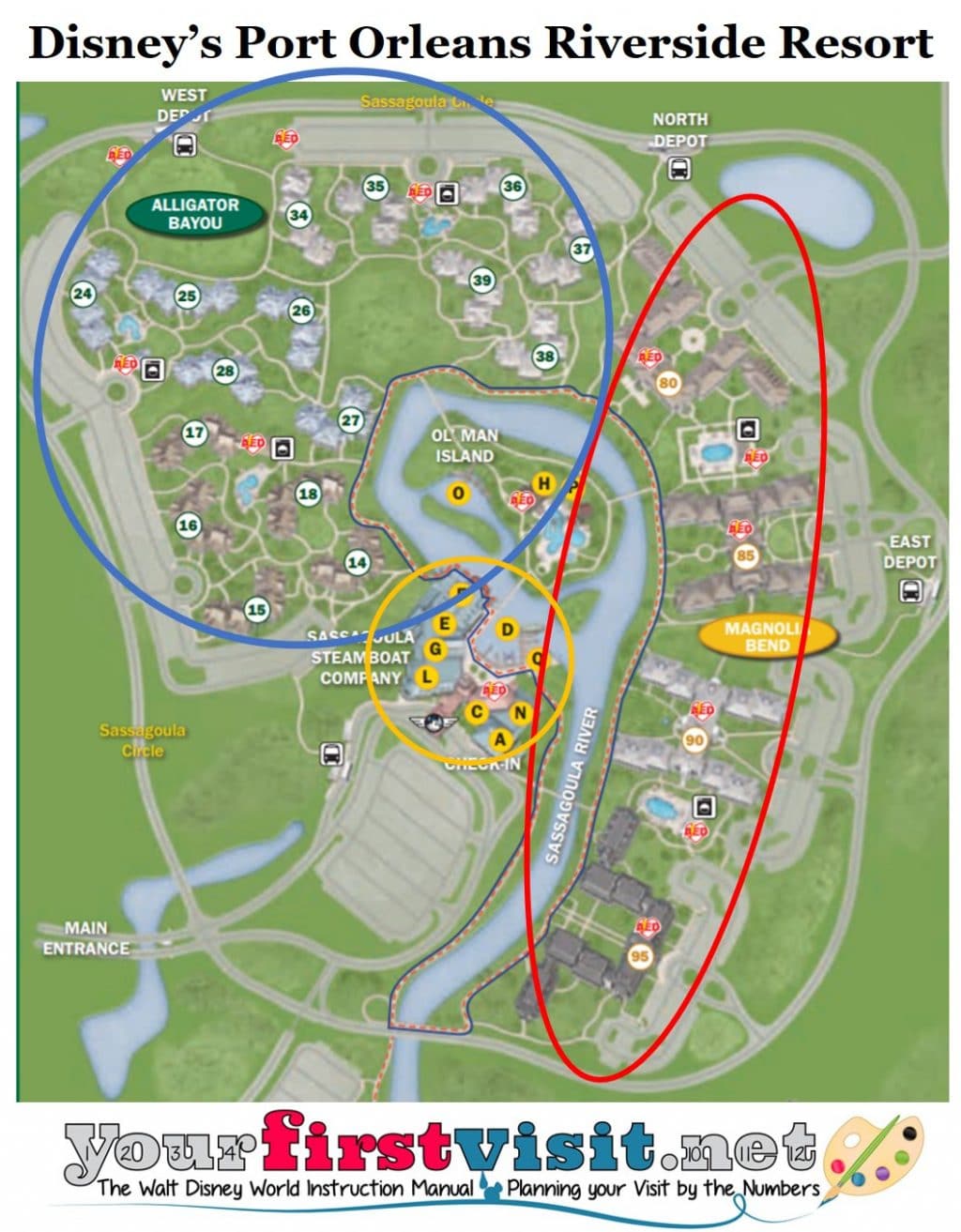 (Disney’s Caribbean Beach Resort is first; Disney’s Coronado Springs Resort second; and Disney’s Port Orleans French Quarter is fourth; these results are very close.  The Cabins at Disney’s Fort Wilderness Resort are ranked last, and this is not close.) 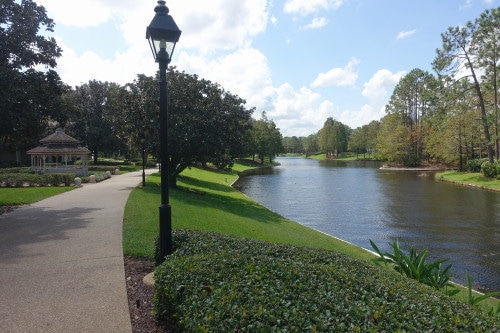 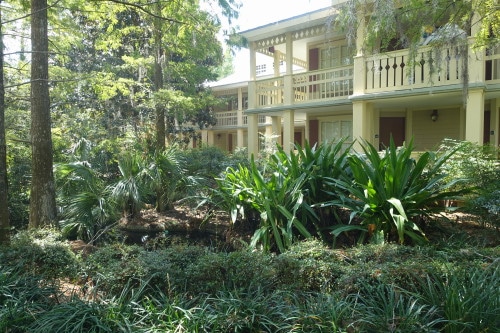 …with a more backwoods and wetland-themed area in Alligator Bayou (blue circle on map). 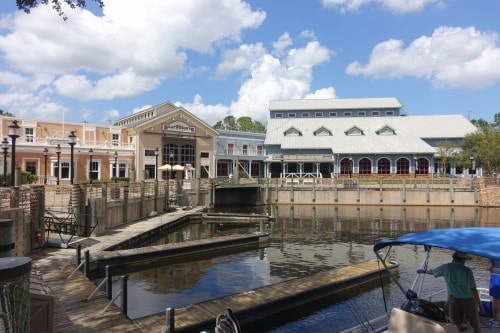 Joining the two, and containing most amenities, is the river-port themed area Sassagoula Steamship Company (gold circle on map).

More so than most of Disney World’s other moderate resorts, Port Orleans Riverside has distinct areas and room types, with varied pros and cons.

Port Orleans Riverside is undergoing a building-by-building minor room refurb project. This refurb is complete in its Alligator Bayou section, and refurbs in the Magnolia Bend section are complete in the standard rooms. WHat’s next for the Royal Rooms is unclear.

The northern-most of these buildings are Acadian House and Magnolia Terrace. These are the best-located of the Magnolia Bend options, being closer to the resort’s central amenities and more convenient to bus stops than the two more southern buildings. 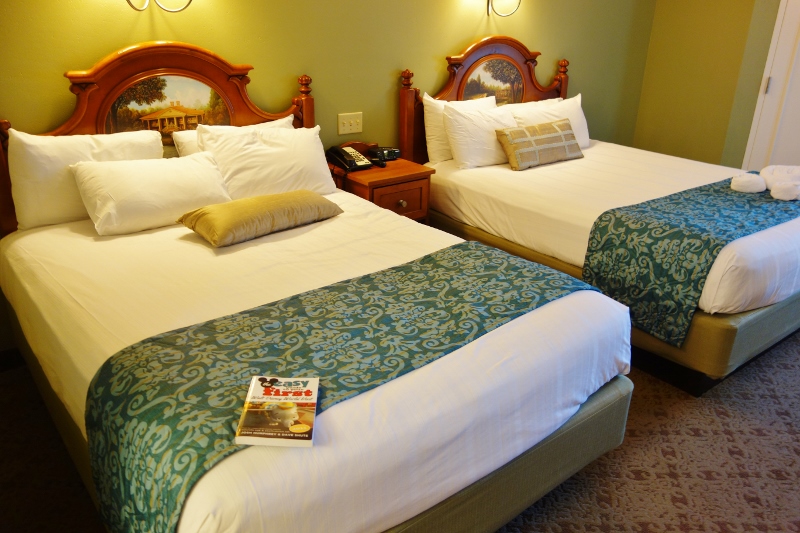 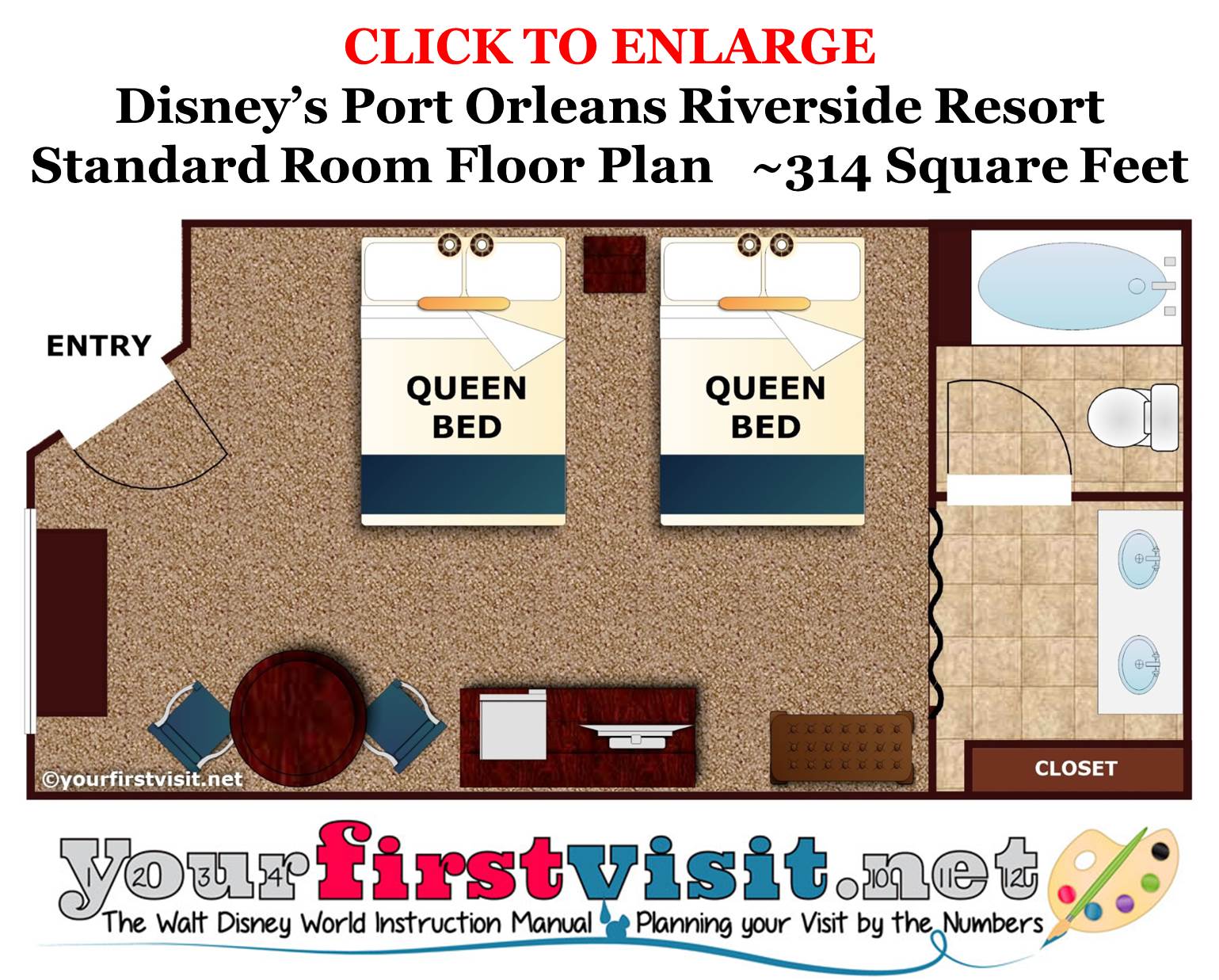 Their floor plans are typical of the moderates. For a full review of this room type, see this.

Royal Rooms are distinctively decorated to a Disney Prince and Princess theme, and are higher cost than the other options at Port Orleans Riverside. Their floor plans are very similar to those in the two other Magnolia Bend buildings. They sleep four in two queens–no king bed rooms are in the Royal Room buildings.

Families who find the added theming worth the extra ~$50-$100 per night these rooms cost may find them quite pleasant. The buildings themselves, however, are distant from the main pool and from bus stops.

A detailed review of the Royal Rooms is here.

The Alligator Bayou section of Port Orleans Riverside is on the northern and western sides of the resort. The two-story, no-elevator buildings here are themed as backwoods cabins.

These rooms are among the few “traditional” moderate rooms at Walt Disney World that can sleep 5–the only other ones are at Caribbean Beach. 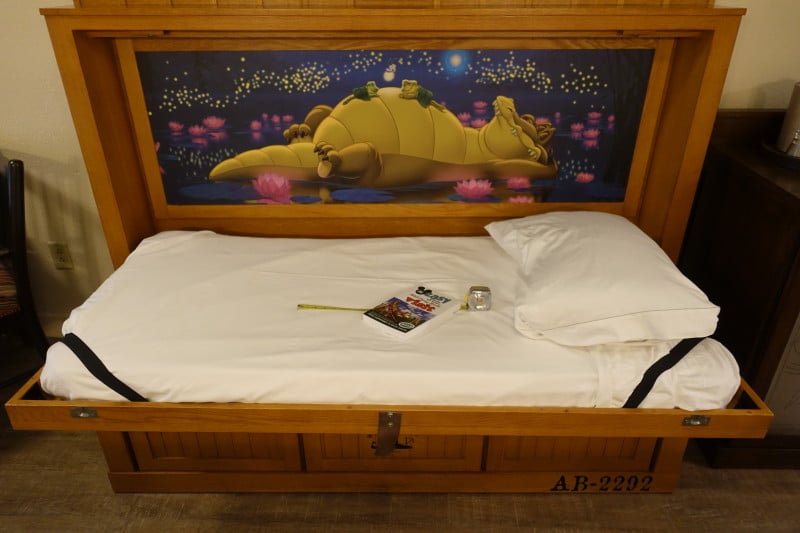 The fifth sleeping spot is in a short (66″) Murphy Bed that drops down from the TV/dresser object. (There’s also a few king rooms, also with the Murphy Bed.) 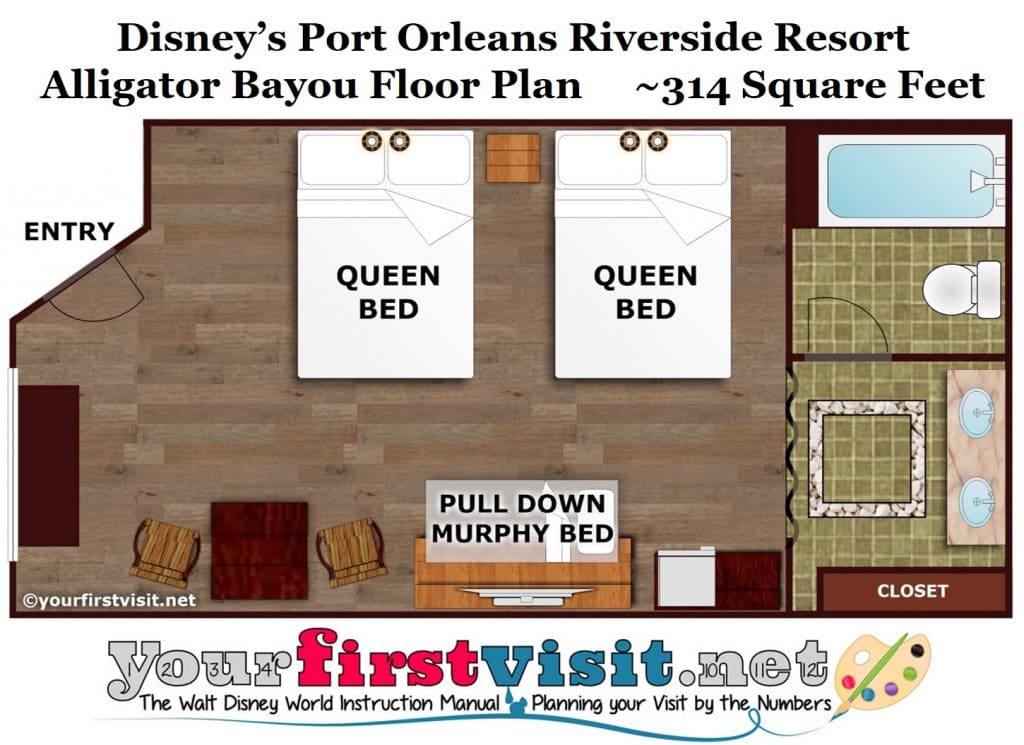 The geometry of the object containing the Murphy Bed means that these rooms have both less drawer space to start with, and also that the drawers are a little hard to access if the Murphy Bed is in use. So for families that don’t need the extra bed, a room in the Magnolia Bend section at either Acadian House or Magnolia Terrace is a better choice.

See a full review of these Alligator Bend rooms here.

There’s much more on accommodations and theming at Port Orleans Riverside here.

Disney’s Port Orleans Riverside has almost as wide a range of amenities as you’ll find at any Disney World moderate resort, falling short compared to the rest only in dining compared to Coronado Springs, which is much better, in spa services and workout facilities, found among the moderates only at Coronado Springs, and in its kids pool, where you’ll find much better ones at Port Orleans French Quarter and Caribbean Beach. 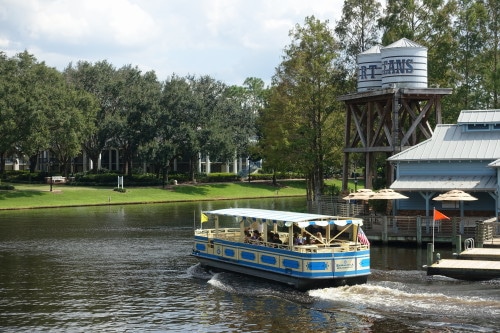 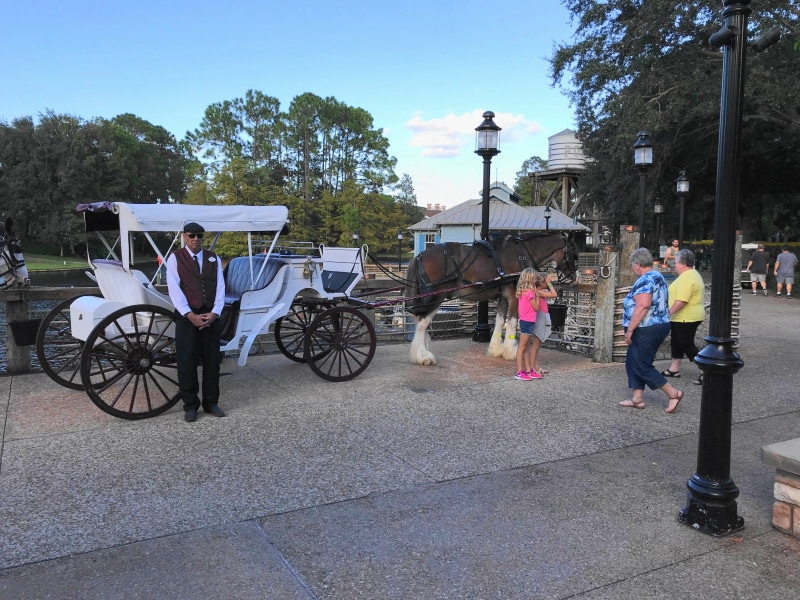 Details on the amenities at Port Orleans Riverside begin here.

Port Orleans Riverside has an indoor bar with a limited menu, a poolside bar with chips and such, a table service restaurant, Boatwright’s, and a quick-service venue, the Riverside Mill. 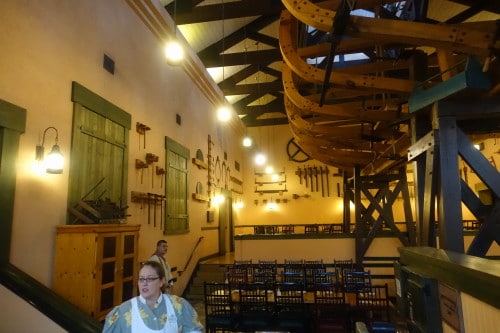 Each has its fans–especially the indoor bar, River Roost, with its common live entertainment from Yehaa Bob— but collectively they are about average among the moderates, and are particularly bested by Coronado Springs with multiple bars and multiple restaurants.

For more on dining at Port Orleans Riverside, see this.

Six pools is either a feature or a bug, depending on your perspective.  There are so many because the main pool is too small to serve all who might wish to use it, and is a hike from many outlying rooms. You’ll find the same feature/bug at Caribbean Beach and Coronado Springs. 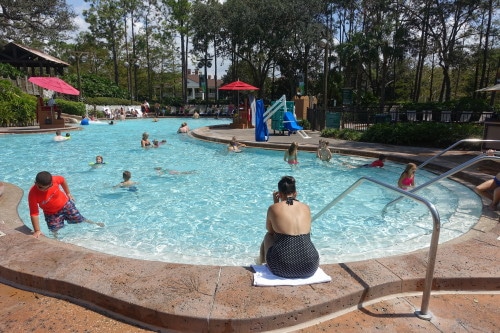 There’s more on the pools at Port Orleans Riverside here.

Kid Appeal. The southern bayou and plantation theming of this resort, while charming to many adults (especially the Magnolia Bend section, whose Georgian architecture is quite lovely), will miss most kids entirely.

That said, its extra amenities bump it slightly ahead of its sister resort Disney’s Port Orleans French Quarter. (French Quarter visitors are encouraged to use these amenities; the difference is that for Riverside guests, they are immediately present.)

Moreover, the Royal Rooms will have great appeal to some kids–though they are more expensive, and less convenient, than alternatives. 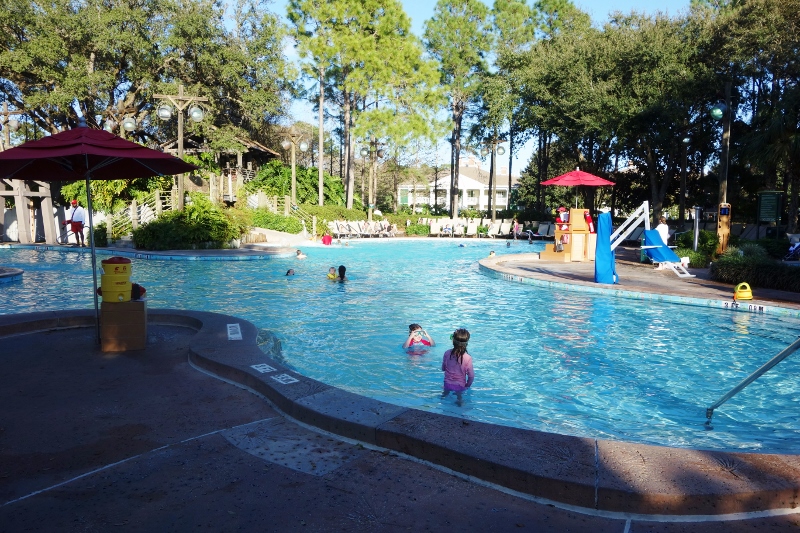 Now, I get comments all the time along the lines of “We stayed at Riverside and it had great appeal for my kids!” Of course it did. All the Disney resorts have great kid appeal. My point is that some have even more than others…

Convenience. Disney’s Port Orleans Riverside is in the middle of moderates in convenience.

While often thought of as out of the way, it is in fact just across the street (or two) from Epcot, and along with Port Orleans French Quarter is the closest of the “traditional” moderates to Magic Kingdom. It also shares with French Quarter a slow boat to Downtown Disney.

Buses sometimes fill before they get to their final stop (although this is much less common than it used to be), and the first day or two of a visit, it can be hard to identify from inside the bus whether one is at the West, North, or East Bus Stop. 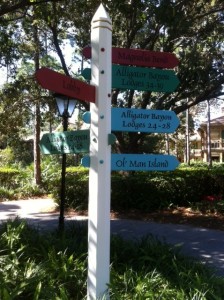 Getting off at the wrong stop matters, because Port Orleans Riverside is pretty darn big, and can be a challenge to get around.

While at my pace no room is more than a ten minute walk from the central service area and pool, this is assuming you take the most direct path, and don’t get lost. Getting lost–especially at night–in the far reaches of the Alligator Bayou section is easy. Or at least it is for me…

It’s not widely noticed, but the texture of the concrete paths in the Alligator Bayou section is meant to help with wayfinding. Where there are groups of buildings, the main path through them is textured to look like a plank road.

The texturing is meant to indicate to you that you are on a main path, and keep you from wandering off accidentally onto a building-specific path. 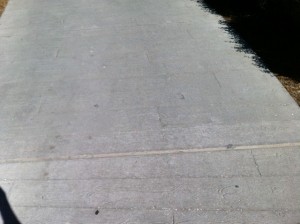 The image on the right side shows the texture of such a plank road.

As a final convenience point, the two story buildings in the Alligator Bayou area have no elevators.

Other distinctive features. One of only  two traditional moderates that can sleep five, in the Alligator Bayou section. (Caribbean Beach is the other, and its five person rooms are slightly more livable.) These Alligator Bayou rooms provide two queen beds and a short Murphy bed. With Port Orleans French Quarter, the only moderate with no lake, and with the French Quarter the only moderate with boat transport to Downtown Disney.

This site suggests that first time visitors stay in standard rooms, not preferred rooms (because they won’t be spending much time in their rooms, or going to the main resort food area often; the single exception is visitors to the Animal Kingdom Lodge, who should always pay for savanna views.)

Unless you need the bed for the 5th person, stay in a top floor (quieter) standard room in building 85– “Magnolia Terrace” –in the Magnolia Bend section. This area is much lovelier than the other section, Alligator Bayou, and the storage is more convenient. And of the non-Royal options, Building 85 is the best choice–lovely, closer to the pool and central services, and with a nearby bus stop.

If you do need the fifth person bed in Alligator Bayou, shoot for a ground floor room (no elevators) in buildings 16, 17 (close to the amenities and bus stop at Sassagoula Steamship Company) or 38–better views, close to the main pool.

The long-time travel agent partner of this site, Kelly B., can help you book your Disney World vacation at Port Orleans Riverside or anywhere else–contact her using the form below: