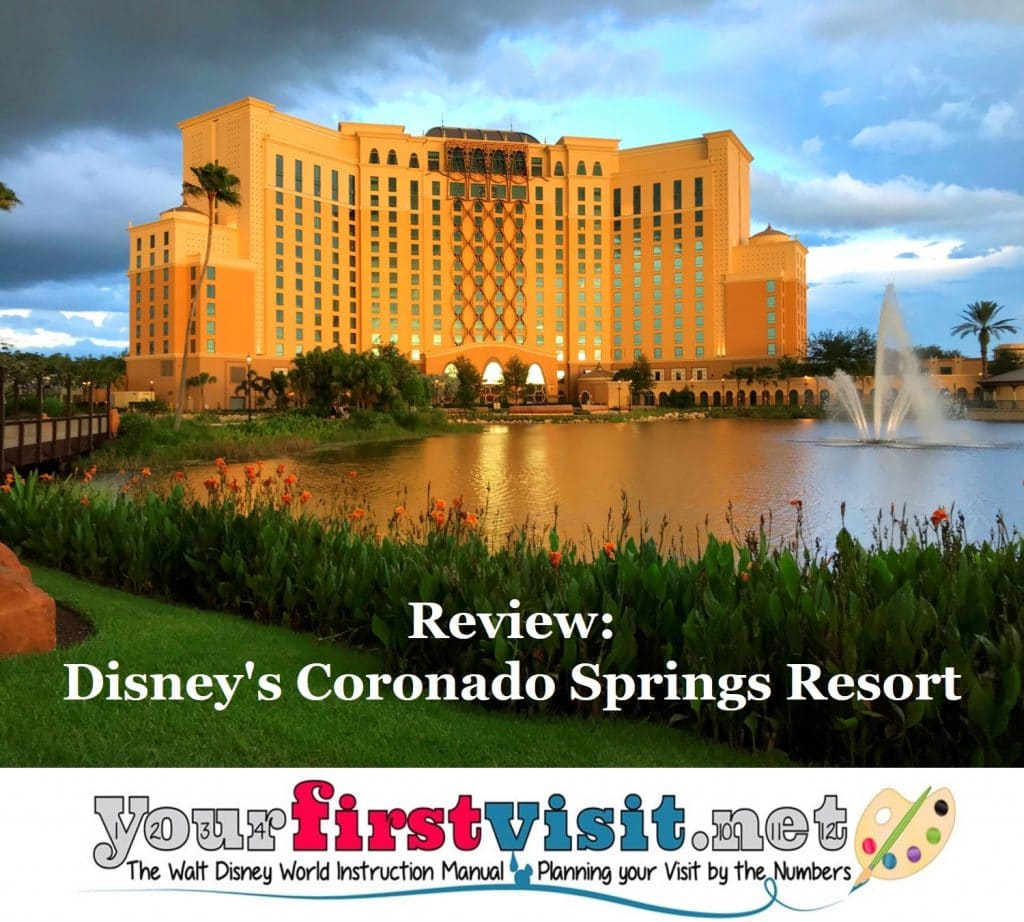 Note: guests at Disney’s Coronado Springs Resort are eligible for Disney World’s Early Entry program, and for early access to its paid individual system for access to certain rides, but NOT for its Extended Evening Hours.

The strength of Disney’s Coronado Springs Resort, compared to the other Walt Disney World moderate resorts, has always been the extra level of amenities it provides.

As the only moderate resort that serves meetings and conventions, it has a number of amenities demanded by its business guests that the other moderates don’t provide, such as multiple dining venues and bars, a spa and two workout gyms, club level rooms, a hot menu at the pool, suites, and more.

On the other hand, the reason it has such good amenities is because Coronado Springs is the only moderate which also serves conventions. If a big convention or meeting is at the resort, the food court, restaurants and bars can be choked up with the crowds. The peak season for Orlando conventions is January through March.

My seven stays at Coronado Springs (most recently in July 2019) confirm that Disney’s Coronado Springs Resort remains the second best of the moderate resorts for first time family visitors.

For all this, you may pay more per night some nights of the year than you would for equivalent room types at Caribbean Beach, but will pay less than at Port Orleans Riverside or French Quarter. Coronado Springs is on average the lowest priced moderate resort. This means that, at least for adults, because of its extra amenities Coronado Springs Resort presents far and away the best value for money among the moderates.

You can have a wonderful visit at any Walt Disney World resort. However, this site recommends that first time visitors to Walt Disney World avoid the moderate resorts, while noting that these resorts are wonderful for visits after the first. (See this for why.)

Because of that, I’ve stayed (so far) in the moderate resorts 39 times, and published up-to date and detailed reviews of each.

This review of Disney’s Coronado Springs Resort has seven pages

Uniquely among the moderates, Coronado Springs has two different types of standard rooms.

One type of standard room is found only in three of Coronado Springs’ four accommodations areas, in the Casitas, Ranchos, and Cabanas areas. These rooms are similar to those at the other moderates, and like those elsewhere are on the order of 314 square feet. While king bed rooms and suites are available, most rooms sleep four on two queen beds. You can add to this capacity of four a child younger than three who sleeps in a crib.

These rooms are quite spacious, and the bedroom area is particularly ample–bigger than the bedroom spaces at the smallest deluxe resorts. (See this.)

These rooms have some differences compared to other standard moderate rooms, mostly tied to their potential use by double-occupancy convention visitors. 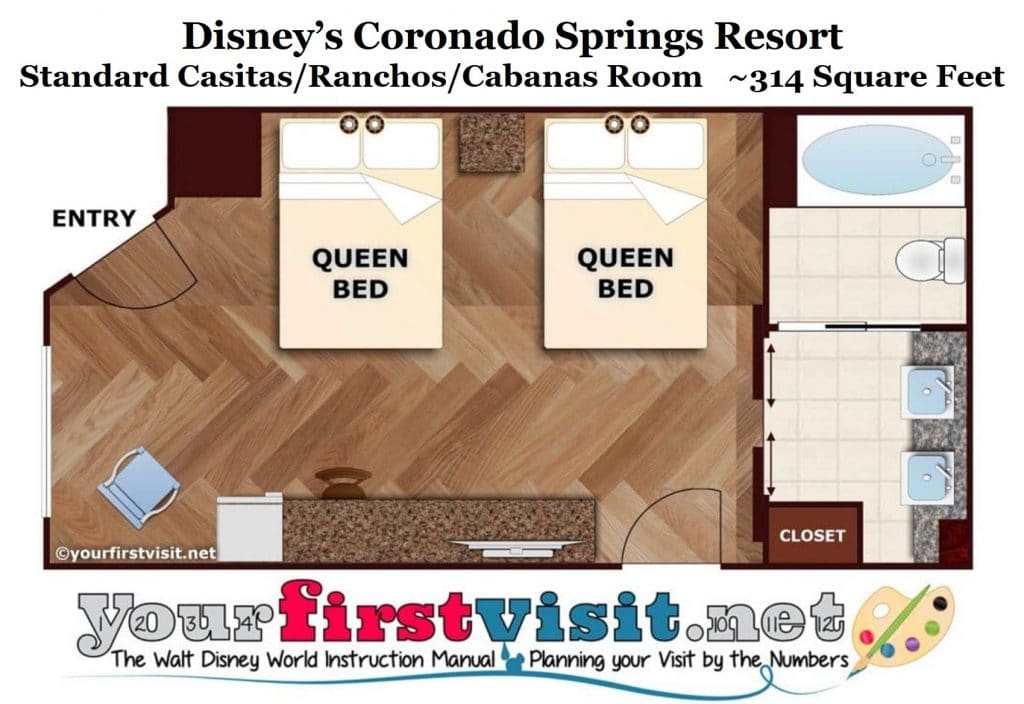 The floor plan of one of these Casitas, Ranchos, and Cabanas rooms is above. 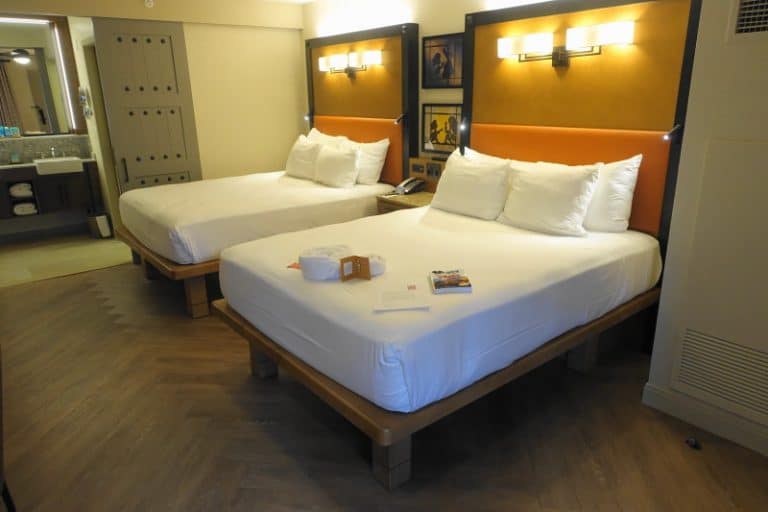 These rooms were refurbed in 2017-2018. The main differences in the refurbed rooms compared to the prior rooms: 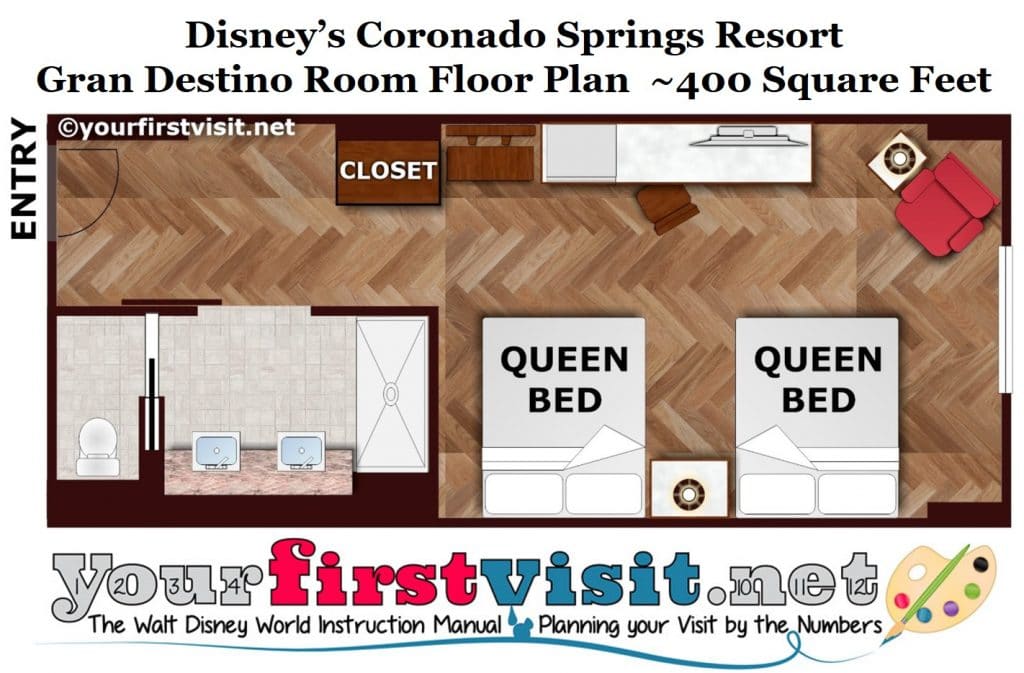 The other type room type at Coronado Springs, found only in the Gran Destino Tower, is distinguished by having interior access and more square feet than any other standard moderate room. Many of these rooms also have nicer views than you’ll find at any other moderate option, whether in Coronado Springs or not. 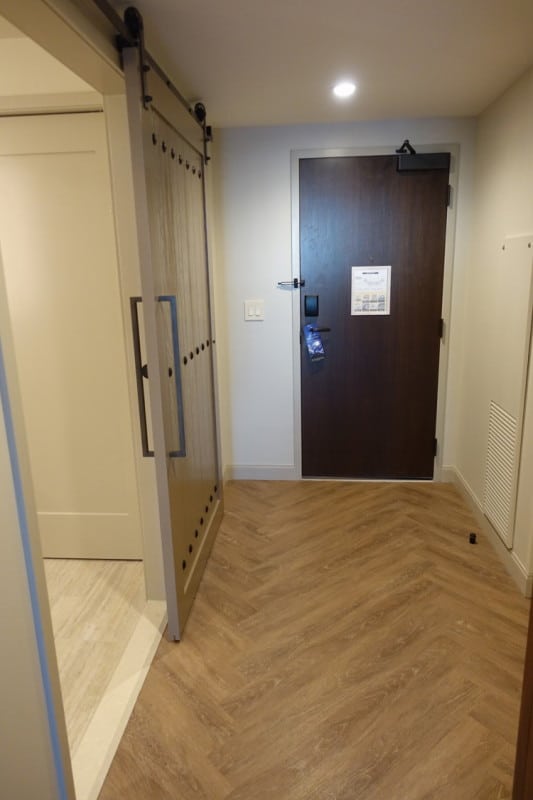 Most of the extra square footage in in the entry hall, and is of little use except for parking ECVs or strollers.

The bath in Gran Destino rooms is a bit larger and nicer than those in rooms in the Casitas/Cabanas/Ranchos, but has an odd layout (it would work better if both the shower and the toilet were in the separate space), and no tubs are available as far as I know.  Rooms elsewhere at Coronado Springs are thus more family-friendly–and typically cheaper as well.

A photo tour of a Gran Destino room at Coronado Springs is here. Also available in Gran Destino are more suites, and also club-level rooms.

More on the four accommodations areas and their pros and cons is here.

Coronado Springs has always had more, and more varied, dining than that available at any other moderate resort. 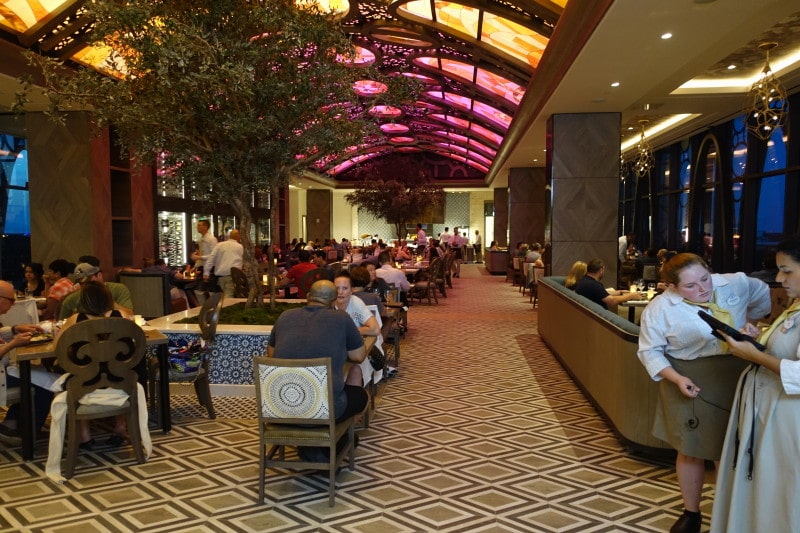 The new dining venues that opened here in the summer of 2019–the rooftop Toledo at Gran Destino (above) and the on-the-water Three Bridges Bar & Grill–give it four table service restaurants. three more than any other moderate. 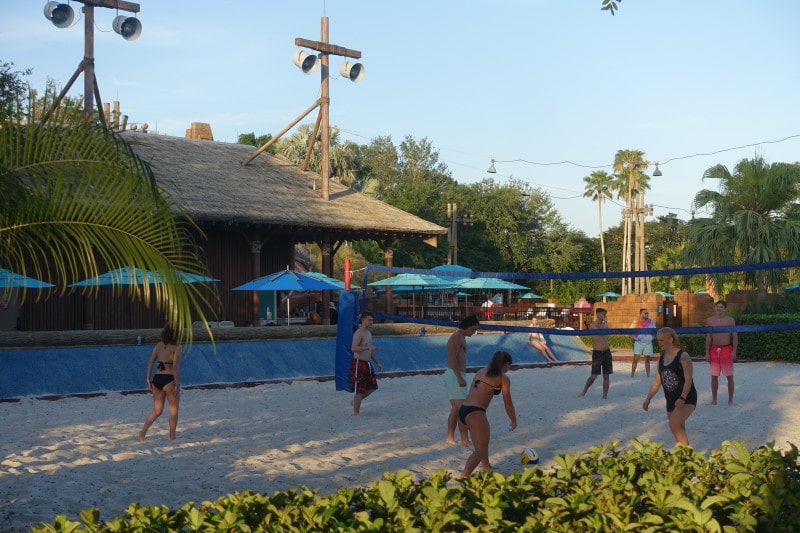 The main Lost City of Cibola pool is bested among the moderates only by the main pool at Caribbean Beach. Always a bit small, the addition of about 25% more rooms from the Gran Destino Tower can make it even more over-pressed.

There’s more on the pools at Coronado Springs here.

Kid Appeal. While slight, the kid appeal of Disney’s Coronado Springs Resort is enough to bring it to second in the ranking on this measure among the moderates, after Disney’s Caribbean Beach Resort. 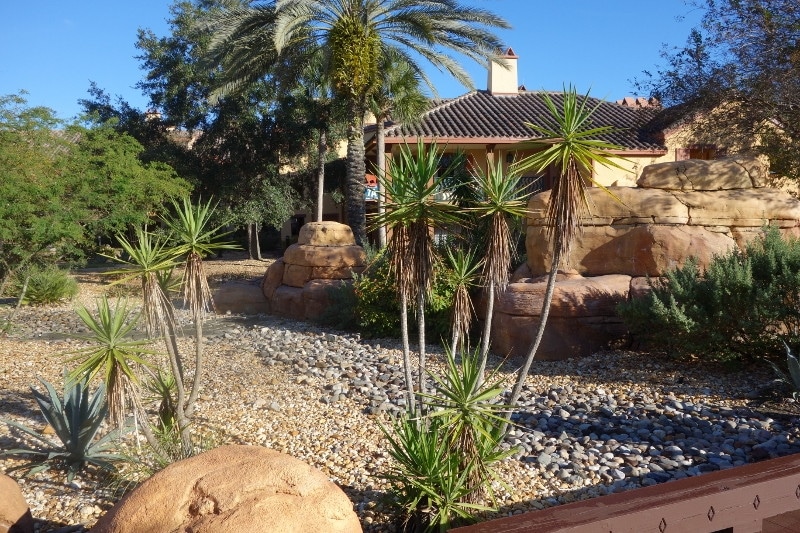 –The architecture and theming, which will be exotic and intriguing to some kids who have not traveled to or lived in the American Southwest, Mexico, South America, or Spain. 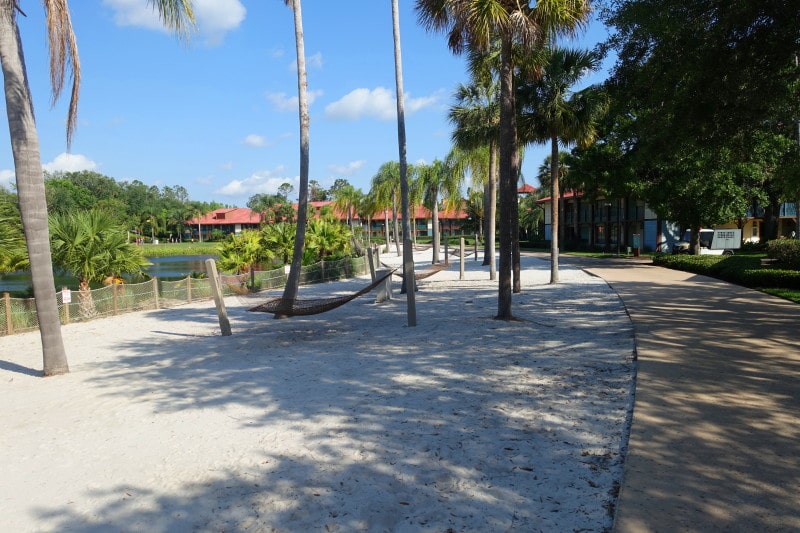 –The beaches in one of the resort’s four sections, the Cabanas area. 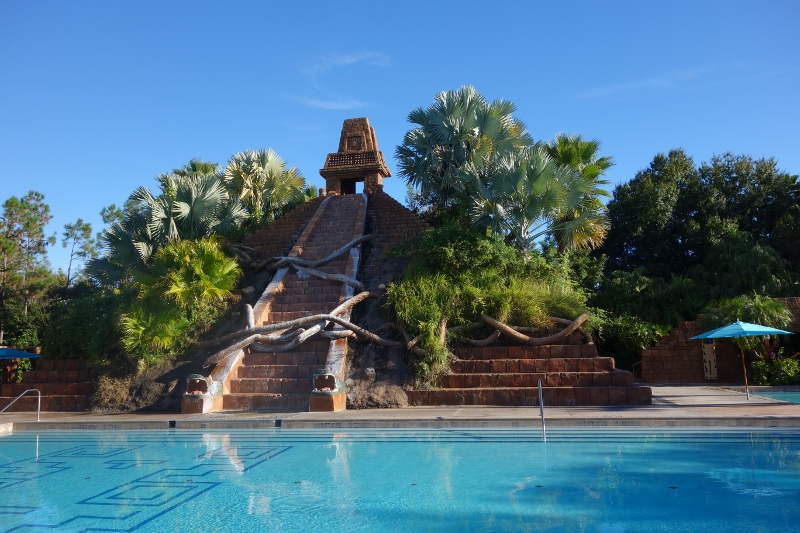 –And the fun main pool, decorated with a Mesoamerican pyramid.

The rooms themselves have little kid appeal, being the most “businesslike” of rooms in any of Disney’s moderate resorts, but Casitas, Ranchos and Cabanas rooms have a little Disney whimsy.

Convenience. Disney’s Coronado Springs is the second most convenient of the Moderates, exceeded only by Disney’s Port Orleans French Quarter.

Disney calls it an “Animal Kingdom Area Resort,” and it is poorly placed on maps in many websites and guidebooks right next to the Animal Kingdom.

It is in fact just a bit west of World Drive, is as close to Disney’s Hollywood Studios as it is to the Animal Kingdom, and is the most centrally located of all the moderate resorts.

(It is just south of the (theme park attendance weighted) center of Walt Disney World. This center is located in the undeveloped area west of World Drive, north of the Coronado Springs Resort, and south of the Magic Kingdom parking lot.)

This site suggests that first time visitors stay in standard rooms, not preferred rooms (because they won’t be spending much time in their rooms, or going to the main resort food area often; the single exception is visitors to the Animal Kingdom Lodge, who should always pay for savanna views).

Coronado Springs has four architecturally different areas: the Casitas, buildings 1-5; the Ranchos, buildings 6a, 6b, 7a and 7b; the Cabanas, buildings 8a, 8b, and 8c; and Gran Destino Tower.

There’s pretty stark trade-offs among the areas in terms of access to food, bars, shops, and the main pool. 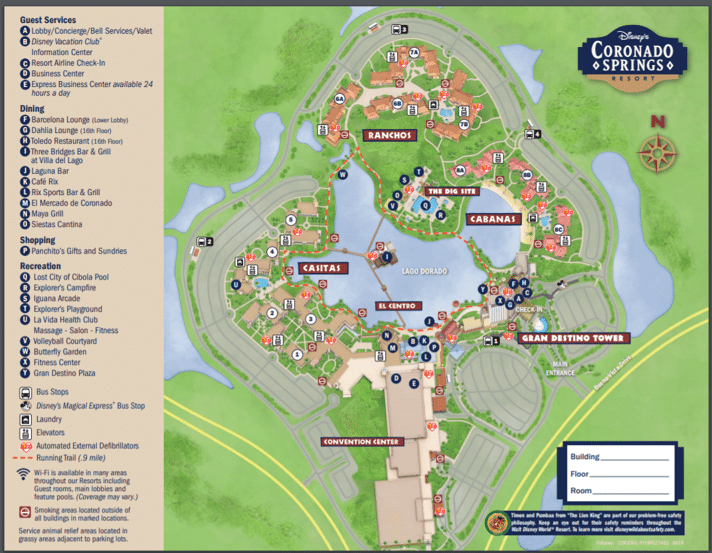 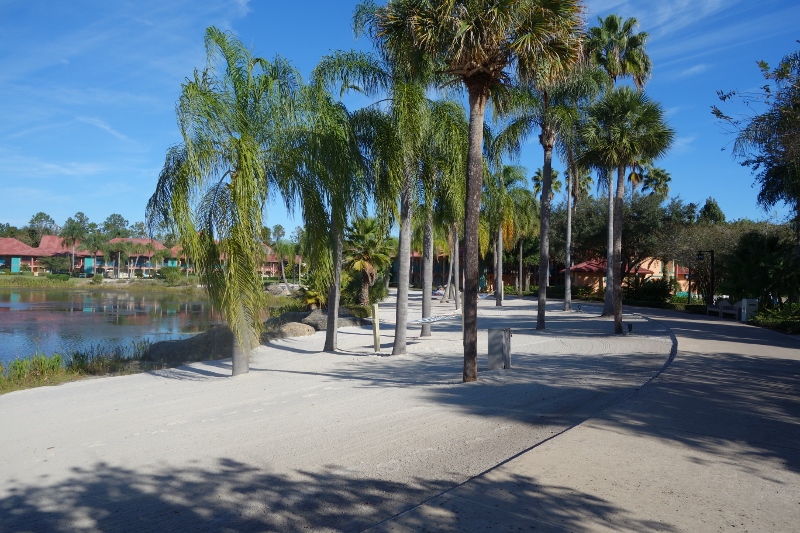 For adults and small families, Gran Destino Tower is the best choice, as it has its own amenities, and is close to pretty much all other amenities. Standard Gran Destino rooms can be up to 20% more expensive than standard rooms in the Casitas, Cabanas, or Ranchos.

For families that would prefer a more sensibly divided bath, then standard rooms on the top floor (quieter) of building 8c of the Cabanas section are the best bet, because of their access to the kid-pleasing beaches that are present only in this section of the resort, closeness to both the main pool and the dining area, and nearby bus stop. The other two Cabanas buildings are also good choices. 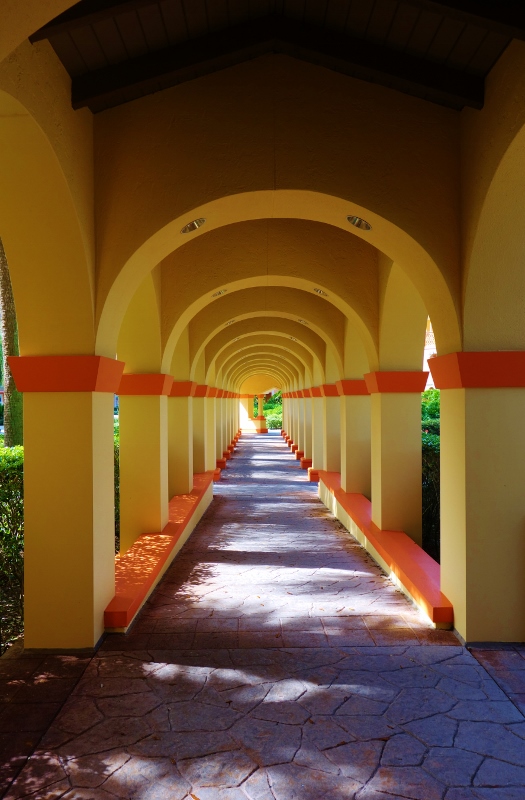 The top floors (quieter) of the Casitas are the next best choice, partly because their architecture provides a mostly sun-and-rain-shielded walkway to the central services and food area. Buildings 1, 2, and 3 (preferred) benefit from this walkway, and are closer to the food court; buildings 4 and 5 don’t have the walkway, and are further from the food court, but are closer to the main pool.

Avoid the Ranchos (buildings 6 and 7), as their theming—southwestern desert—is too subtle for most kids, and may show up to them as ugly or forbidding instead. They are also farthest from the food and other central services—though many are quite close to the main pool.

The long-time travel agent partner of this site, Kelly B., can help you book your Disney World vacation at Coronado Springs or anywhere else–contact her by using the form below.