Weather and When to Go to Walt Disney World 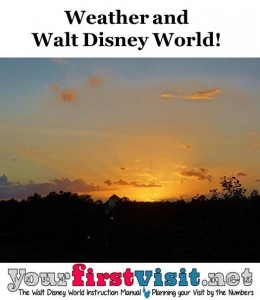 If you can’t go to Walt Disney World the recommended weeks, or are just curious about weather patterns in Orlando, the following pages illuminate the weather in Orlando in the recent past.

This page illuminates rain in Orlando and Walt Disney World by illustrating average total inches of rain over the 9 days of your trip by arrival date. It depicts how the rainy season gets into gear in mid-May and that substantial rain is possible through the end of September.

This page illuminates the chance of a cyclonic storm affecting any part of Florida anytime during a 9 day visit, based on arrival date.

The takeaway is that a vacation has the biggest chance of being affected for arrival dates in late August through early October. It would be unusual for your vacation to be ruined, but it has happened.

This page provides suggestions for dealing with the two tornado seasons in Orlando: winter/spring, and summer.

The next two pages focus on Walt Disney World pool weather during the cooler months–for those who need some pool time to go with their adventures and wonder how much of that they will get during the winter.