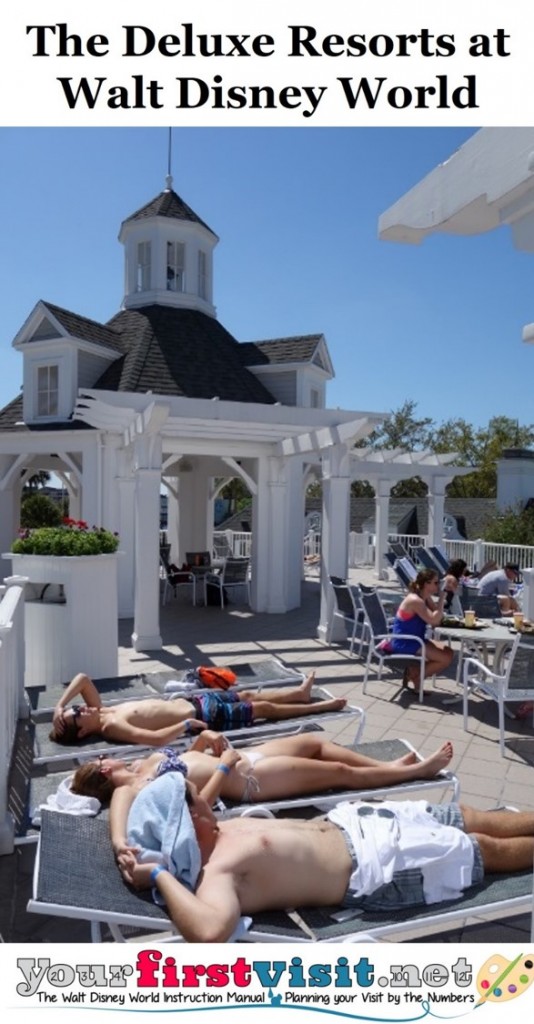 Note: guests at Disney World’s deluxe resorts are eligible for Disney World’s Early Entry program, for early access to its paid individual system for access to certain rides, and for its Extended Evening Hours.

Compared to other Walt Disney World owned and operated resorts, the deluxe resorts are distinguished by having 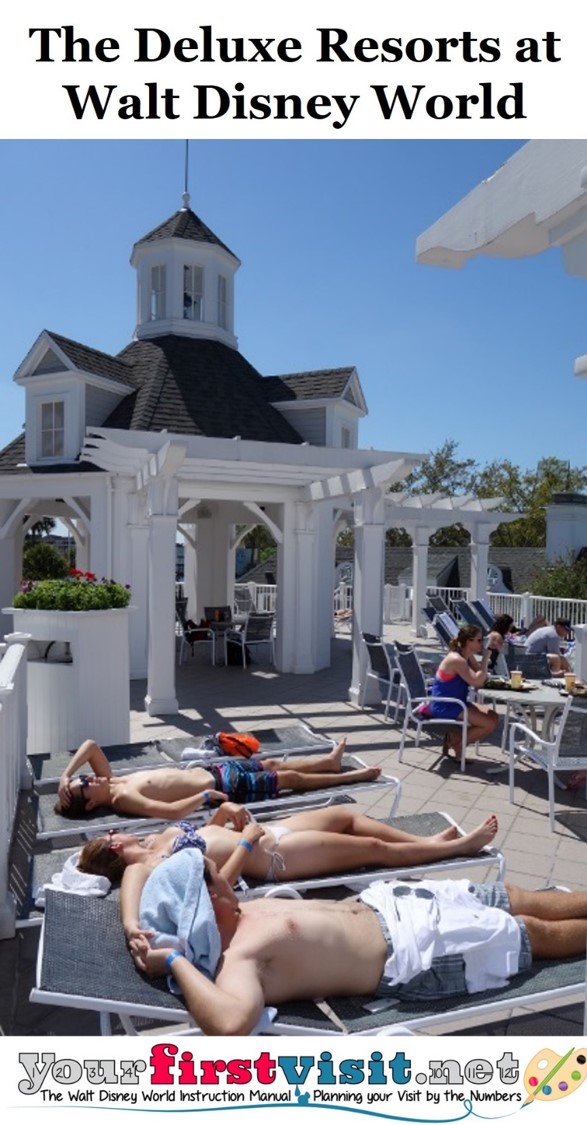 There are eight deluxe resorts at Walt Disney World, and you really can’t go wrong booking any of them.  Whichever you stay at on your first visit will likely become your favorite.

However, for first time visitors who may never return, some are better than others.  There are fundamental differences among them in their kid appeal, and major differences in their convenience in carrying out this site’s itineraries.

Based on these criteria, the ranking of these resorts for first time family visitors who may never return is as follows:

Most of these deluxe resorts also offer on their grounds Disney Vacation Club (“DVC”) studios and villas, which are deluxe-class and for rent to the general public.

Stand-alone deluxe-class DVC resorts–that is, not associated with another deluxe hotel–include Disney’s Old Key West Resort, and Disney’s Saratoga Springs Resort and Spa main resort and Treehouse Villas. The DVC resorts are ranked separately here.  If these standalone DVC resorts were listed in the above rankings, they would come in at the bottom of the list.

Kid appeal on this site is defined as a detailed and comprehensive visual environment that evokes in kids fantasy and a spirit of adventure. 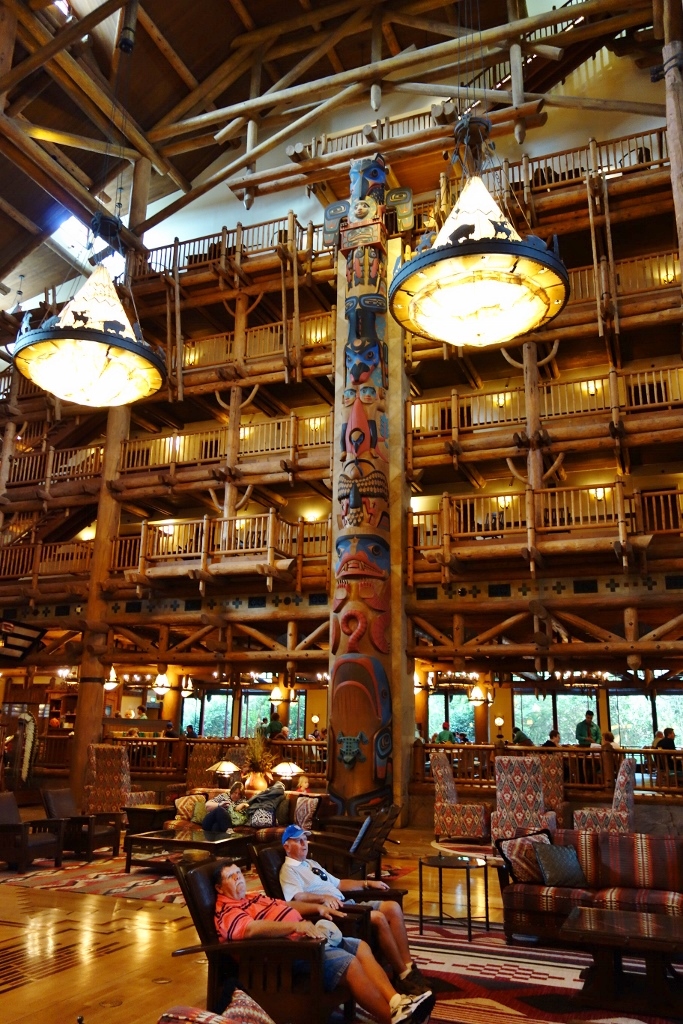 Based on this definition, there are three deluxe resorts with great kid appeal:

The first two are near-tied and head and shoulders above the third. The two Lodges, both designed by Peter Dominick, are stunning fantasias of adventure.  The Polynesian has a more subtle theme, but new Moana-inspired room theming ups it kid appeal even more.

Kids will like any deluxe resort. But compared to the rest, these three have the greatest kid appeal–and are not shy on adult appeal either.  The Wilderness Lodge  is so striking that it’s the only hotel at Disney World that offers a tour.

Of the rest of the deluxe resorts, Disney’s Contemporary Resort stands out for having some kid appeal.

The overall visual impact of the Contemporary is brutalist and geometric, but the “wow” factor of the monorail cruising through the middle of the main building gives it some distinction with kids. A room refurbishment with an expected Incredibles theme should increase its kid appeal even more.

The rest of the deluxes are great places to stay, but compared to the alternatives above have little dramatic visual kid appeal. 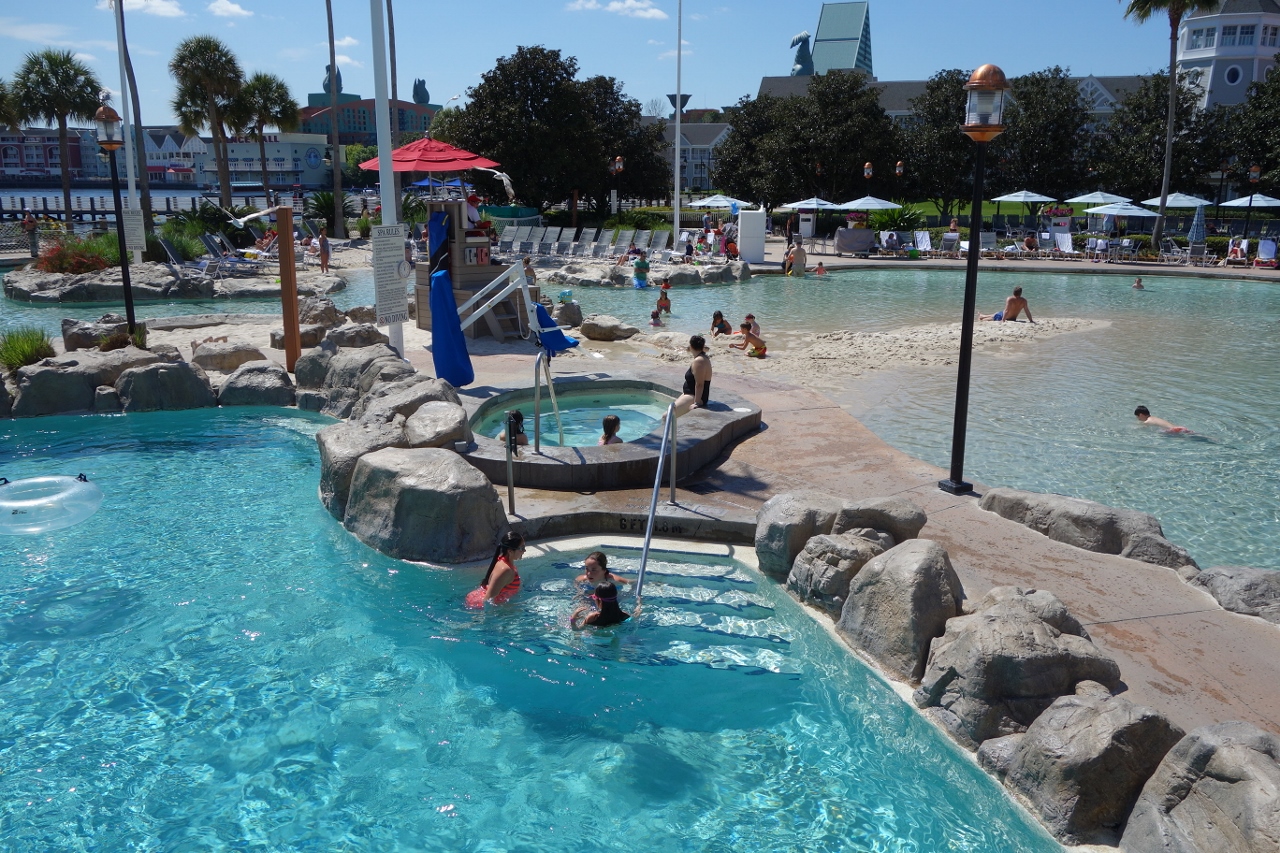 You could view them as almost tied, but they are ordered first on convenience, and then based on the kid appeal of their pools (the Yacht Club and Beach Club share the same pool, Stormalong Bay, above, legendary for how much kids–and their parents–love it):

Convenience rankings are based on time spent in transport in following this site’s  itineraries for first time family visitors.

The convenience ranking of the deluxe resorts is as follows:

Because those following these itineraries spend the plurality of their time in or near the Magic Kingdom, the monorail resorts come out on top, and then the Wilderness Lodge.

Among these, the Polynesian is the most convenient, because it also has easy walking access to the Epcot monorail. The Contemporary and Grand Floridian are next for their walking paths to the Magic Kingdom. 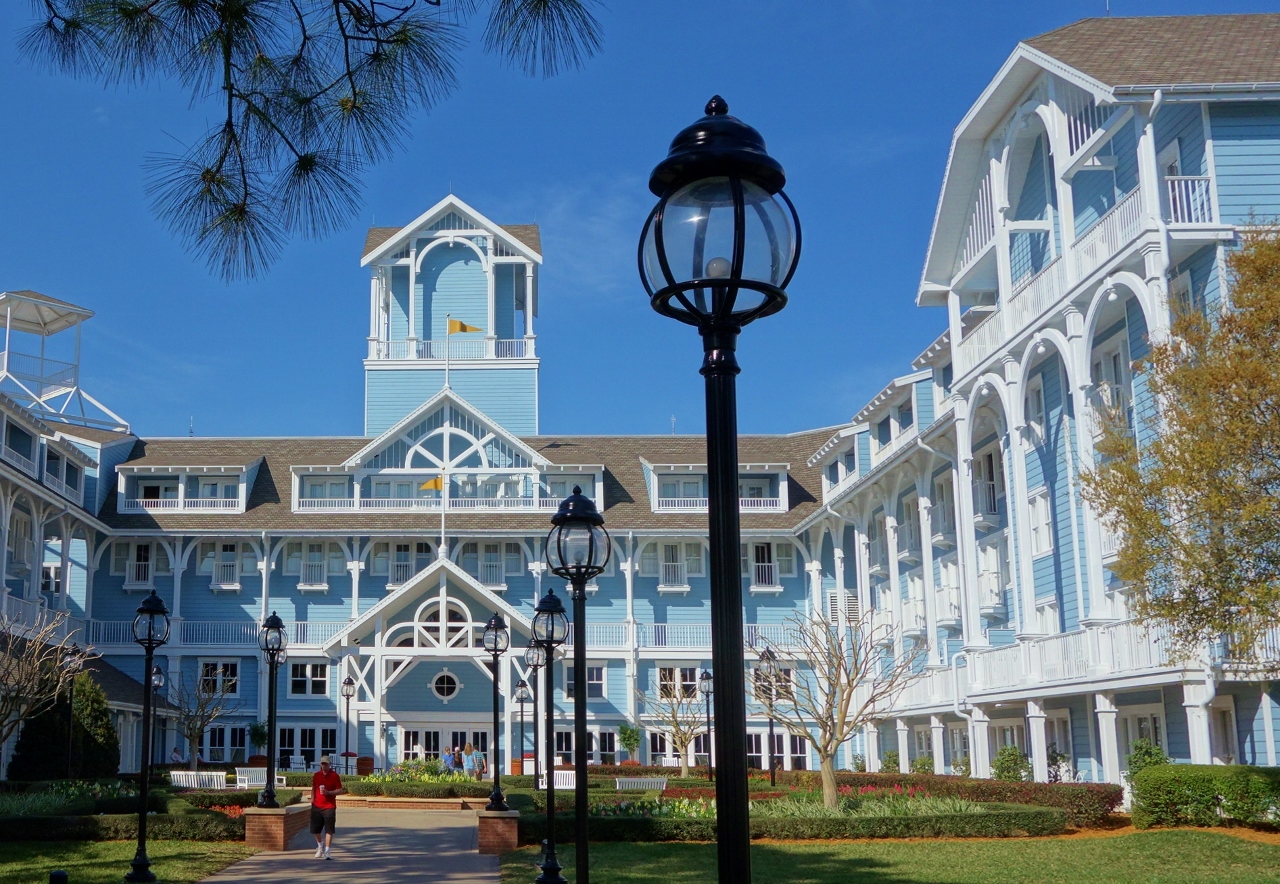 Returning visitors, especially those with older kids, will find the Epcot resorts–the Beach and Yacht Clubs, and the BoardWalk Inn–wonderfully convenient for their walking and boat access to both Epcot and Disney’s Hollywood Studios.

The Animal Kingdom Lodge gets bad press for its relative isolation. Some of this is unfair–one site that I love (except for its material on lodging) claims that it’s a 35 minute drive from there to the Magic Kingdom!

While this claim is comically wrong by more than 15 minutes, it is still true that the Animal Kingdom Lodge is the least convenient of the deluxe resorts.

All standard Disney World deluxe rooms come with the basics–a couple of queen beds, a TV and a dresser or two, a mini-fridge, a table with a two chairs or a two-part desk and chair, and a closet with a safe.

(For more on what you get, see this.)

What varies is how these are laid out, what more you get, and decor. 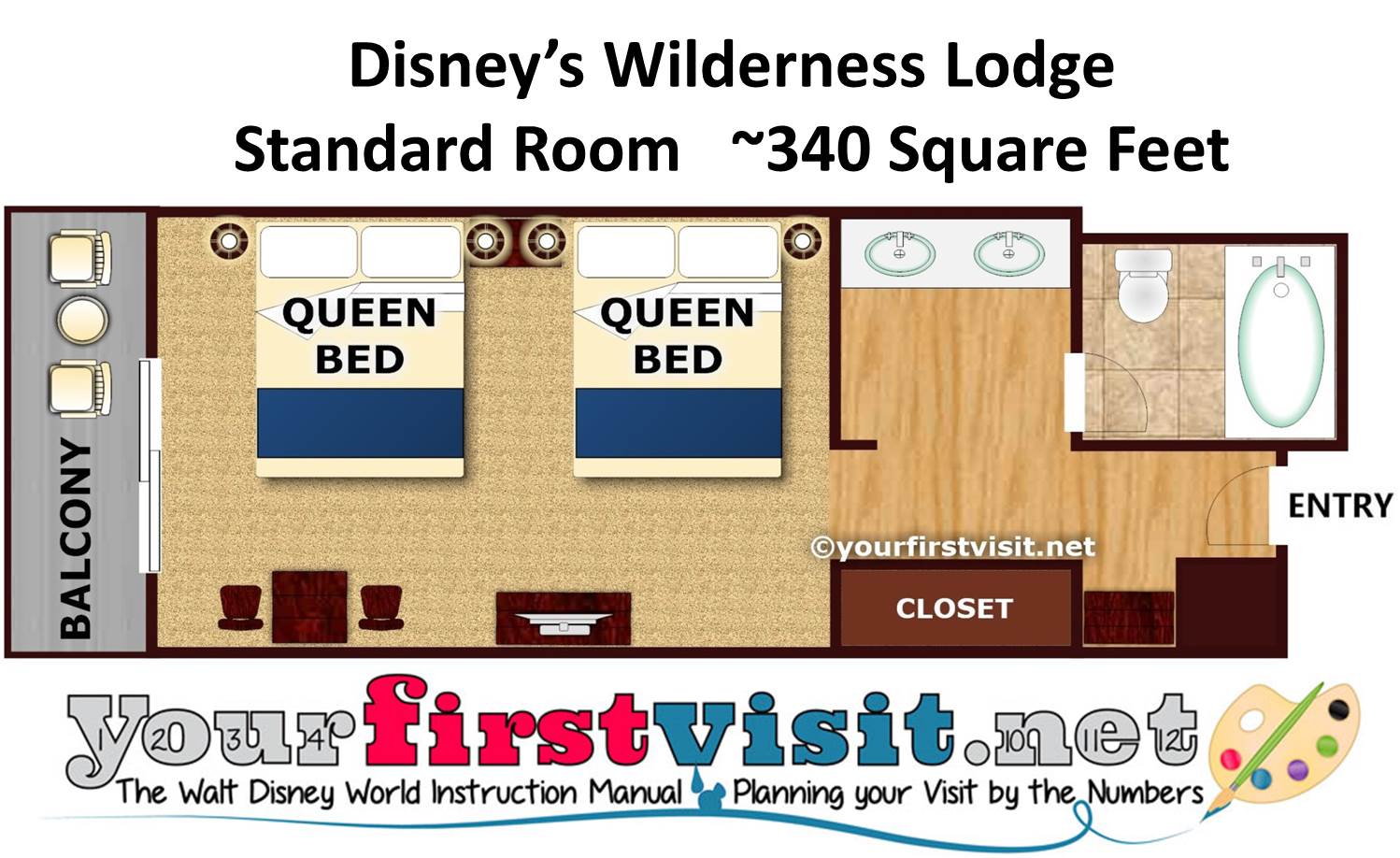 The smallest deluxe rooms–at the Wilderness Lodge and the Animal Kingdom Lodge–come with little more than the basics.

See the floor plan.  These rooms sleep four, and while not as small as a room that comfortably fits two queens can be, they are not much larger.

Contrast the floor plan for the Grand Floridian. 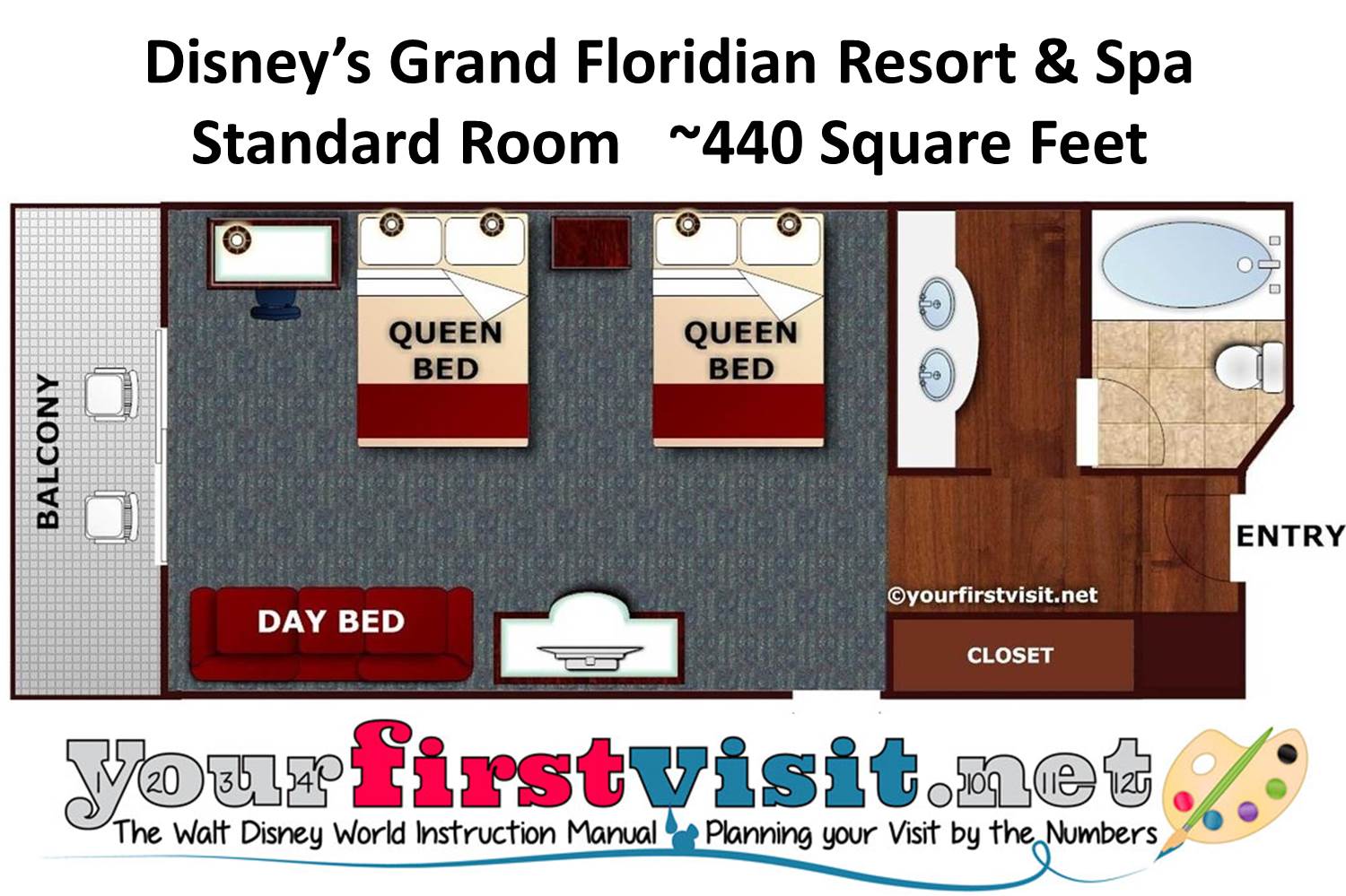 Additional width and length creates room for an easy chair, sofa (that sleeps another person), and desk.

Hotel designers prefer adding length to adding width, since added width increases the square footage of interior hallways that needs to be heated, cooled, furnished, cleaned, and walked down, but provides little help for the biggest design challenge–fitting in the split bath.

But without more width, there won’t be enough circulation space to fit the couch. 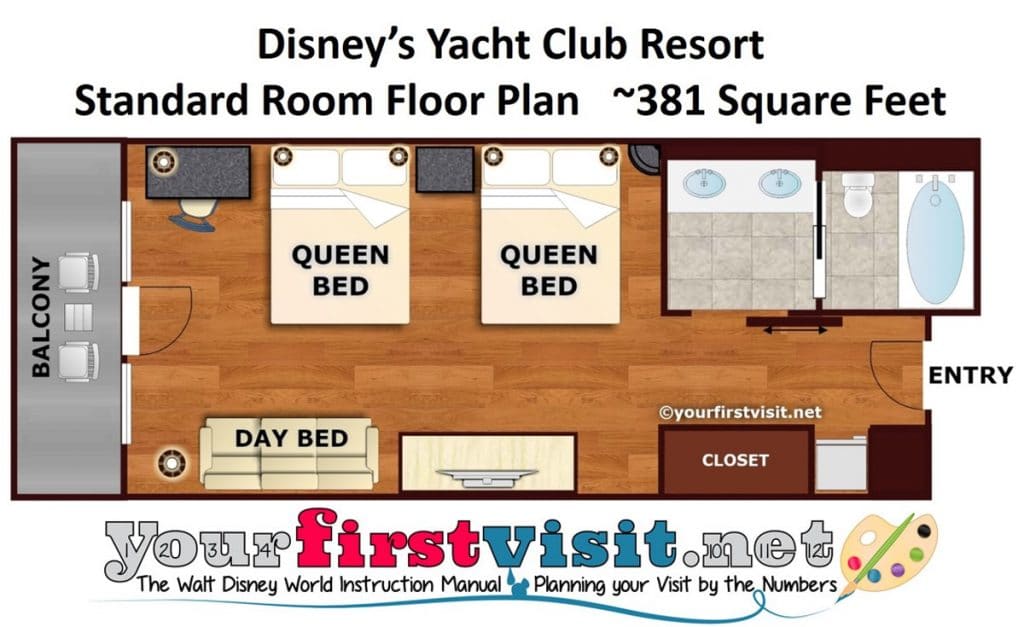 From a design perspective, the Beach Club and Yacht Club are exemplary for fitting everything in without excess square footage, or any sense of the furniture crowding the room or being hard to get around.

As noted above, the split bath can be the hardest design issue.  A split bath separates facilities so that two or three family members can use them at once, but in its most common design creates an eight to ten foot long hallway between the corridor door and the sleeping space–wasted square footage.

Disney’s earliest designs present a curious set of thoughts on how to split a bath. 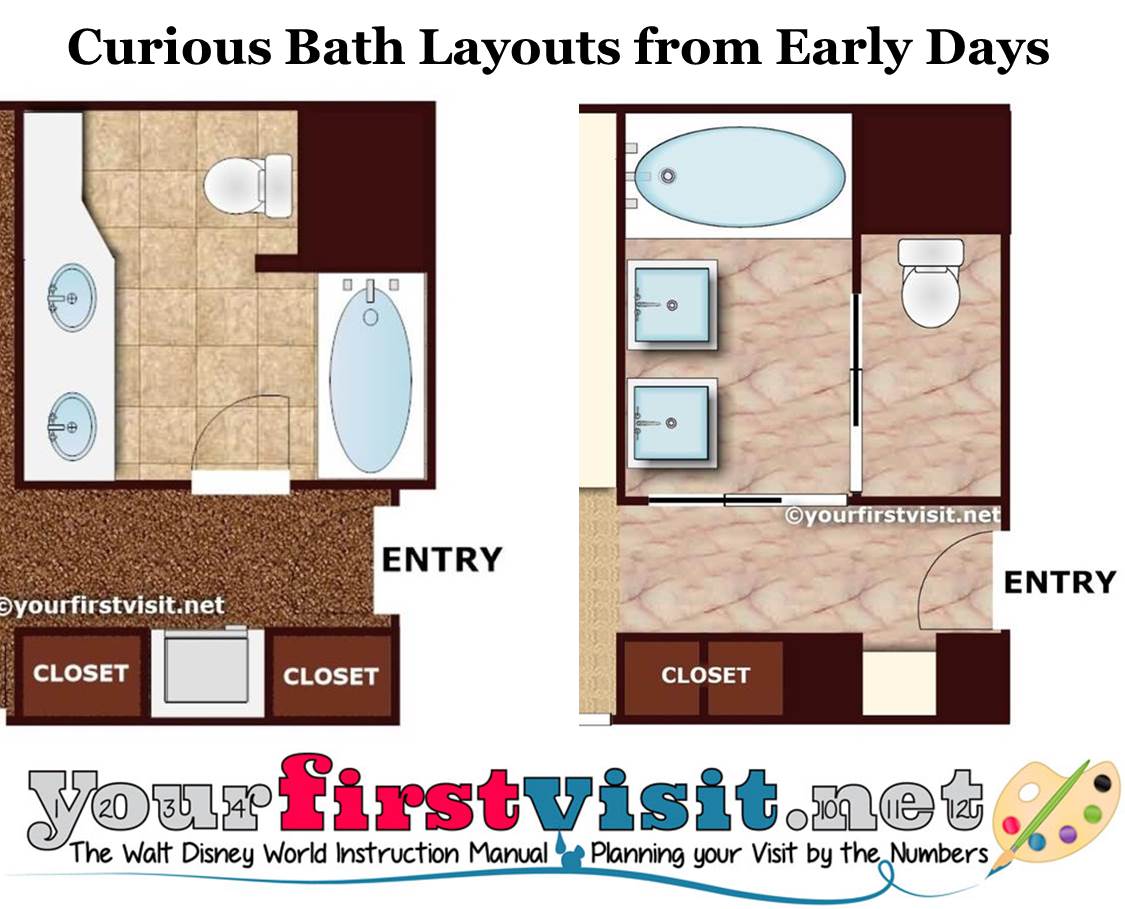 See the image–the baths in the Polynesian are on the left, and at the Contemporary on the right.

Resorts built since then segregate the sinks into one space, and the bath and toilet into another. This is why the whole bath ensemble can be nine to ten feet long.

So why does all this matter? 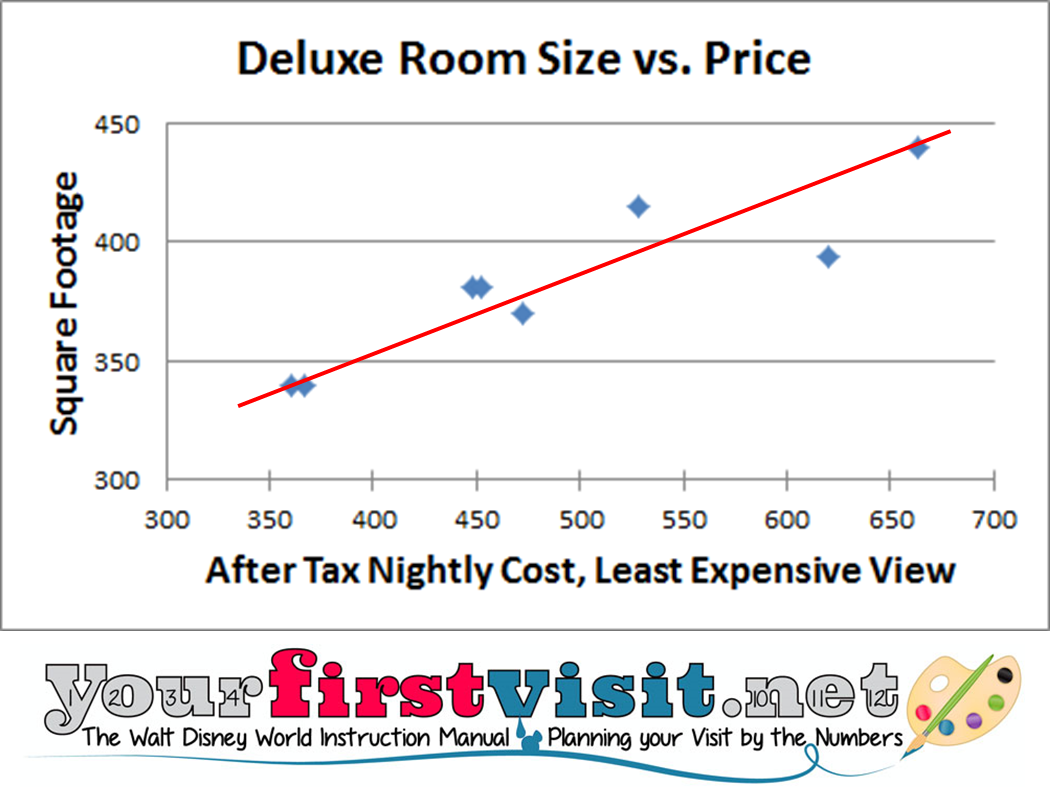 More square feet costs you more.  It’s a little more complicated than that, so I’ll come back to costs in a second, but for the moment see the image.

It charts standard room square feet on the vertical axis, and standard nightly room price on the horizontal axis.

The charted points show where the deluxe hotels fall, and the red line is added to illustrate the correlation between square footage and nightly rates.

More space means higher capital and operating costs; but it also means more value, value that can be charged for.

But space isn’t the only thing going on here, as there are some correlations within the hotels themselves. 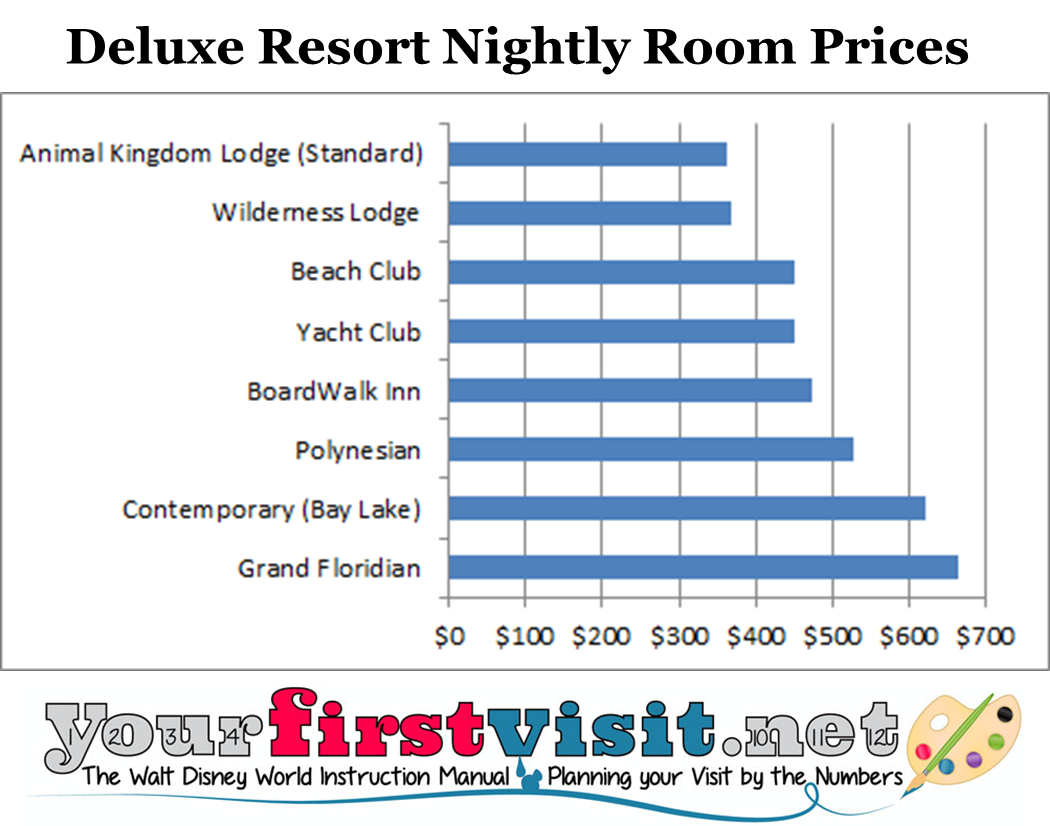 See the image, which orders the Disney World deluxe resorts by nightly price.

So the deluxe prices charge for value: for convenience as well as size.

One of the best features of the deluxe resorts is the often wonderful dining venues at them.

See the image for some distinctions based on these points. You can find detailed reviews of all the resort table service restaurants in the individual resort reviews.

For more on dining at Walt Disney World, see this.