Review: The Little Mermaid Area and Rooms at Disney’s Art of Animation Resort 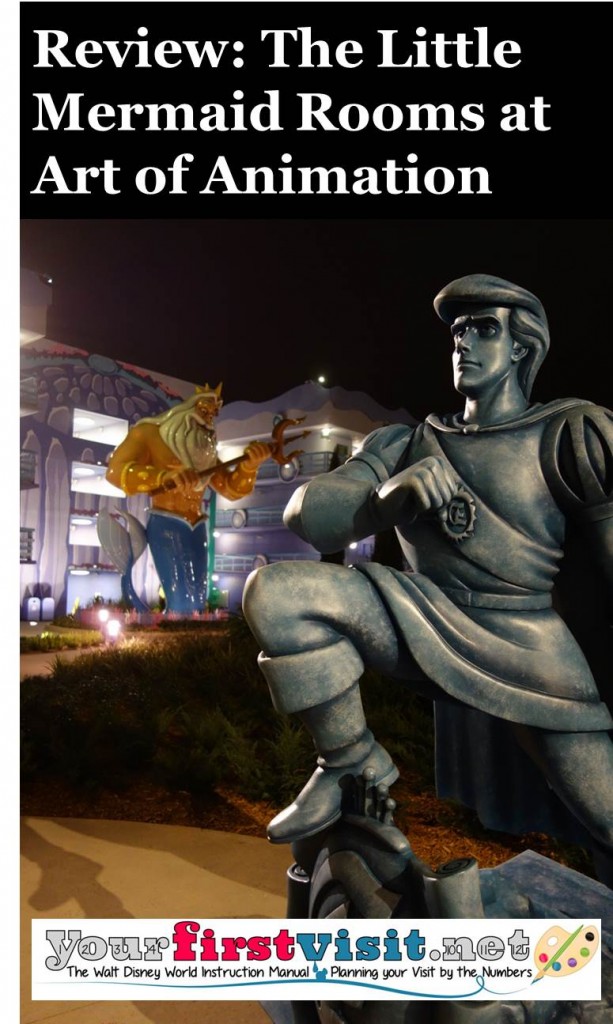 Note: guests at Disney’s Art of Animation Resort are eligible for Disney World’s Early Entry program, and for early access to its paid individual system for access to certain rides, but NOT for its Extended Evening Hours.

One room type, Family Suites, fills the seven most convenient buildings at Art of Animation.

These spaces sleep six in over 500 square feet, and cost $450 to almost $800 a night including tax. See this for more on these Family Suites.

The other room type, standard rooms in the Little Mermaid, is the subject of this page. 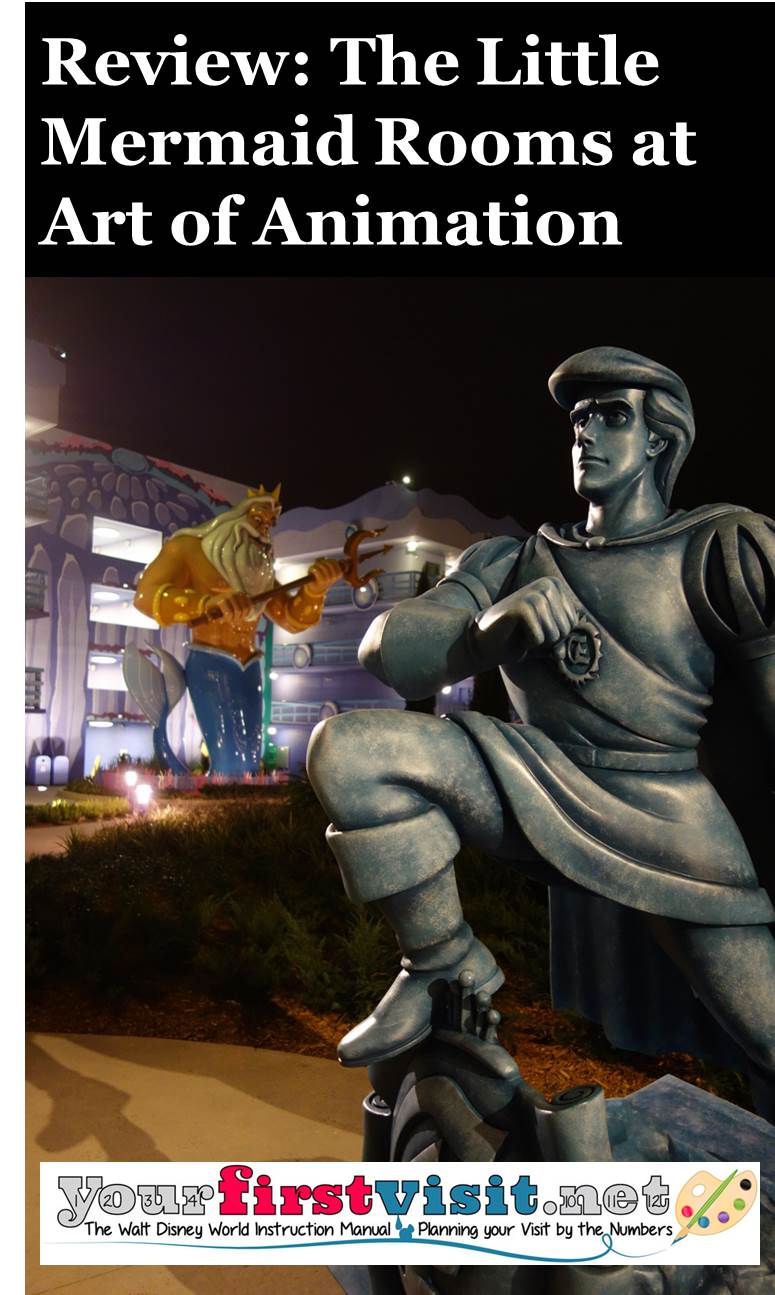 Standard rooms at Art of Animation are found in its three least convenient Little Mermaid buildings, and sleep 4 in full beds in about 260 square feet. These rooms cost $180-$330 a night including tax—less than half of what the Family Suites are going for.

These two room types are profoundly different—anyone reserving one but expecting the other is in for a shock.

Based on this comparison, standard rooms at Art of Animation outshine the alternatives, (except possibly queen bed rooms rooms at Pop Century, All-Star Movies, and All-Star Music) and are this site’s most highly recommended value resort standard rooms.  They have the highest kid appeal of any value resort—for both boys and girls—and this kid appeal outweighs for almost all families their slight deficits in convenience.

That said, Little Mermaid rooms average $80/night more than All-Star rooms, and $40/night more than rooms at Pop…and in the summer approach the prices of moderate resorts. So you are definitely paying for the kid appeal there rooms present.

Note that the long-time travel agent partner of this site, Kelly B., can help you book your Disney World vacation at Art of Animation or anywhere else–contact her at using the form at the bottom of this page 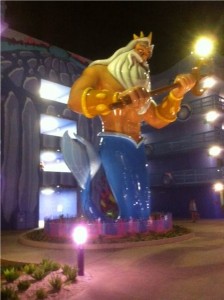 On this basis, Disney’s Art of Animation Resort is the best value resort for first time family visitors.

All of the value resorts–Disney’s All-Star Sports, All-Star Music, and All-Star Movies,  its Pop Century Resort, and Art of Animation–have terrific kid appeal.

While Art of Animation has taken this theming to a whole new level, both in exteriors and interiors, the exterior theming in the Little Mermaid area is similar in scope and scale to what you will find at the other value resorts. 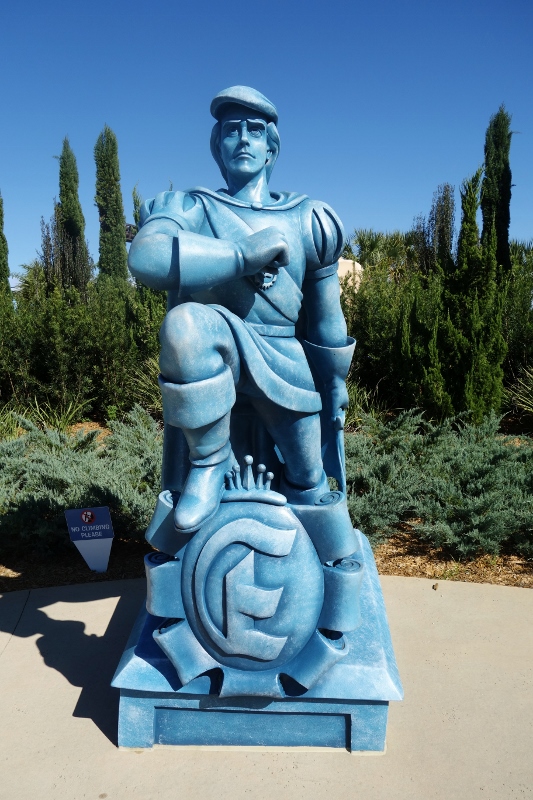 As you walk into the Little Mermaid area, you are greeted by Prince Eric. 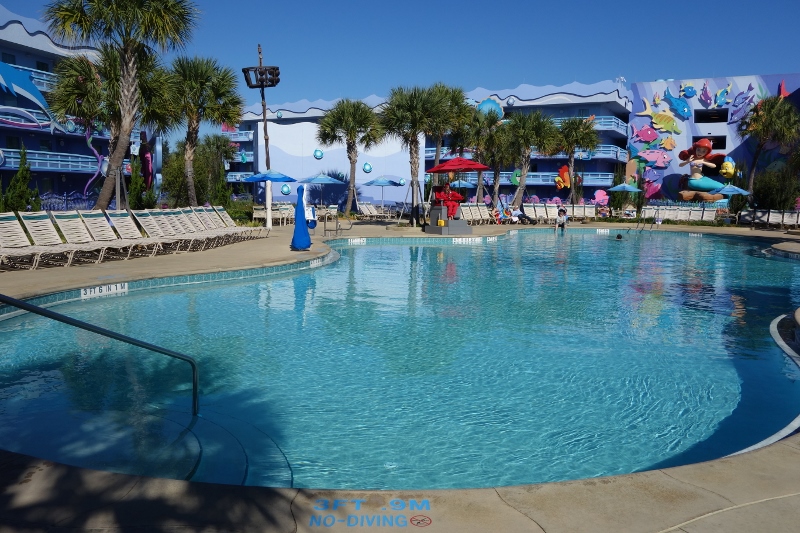 Outside of each of the three buildings there’s a four-story statue of a character from the movie: 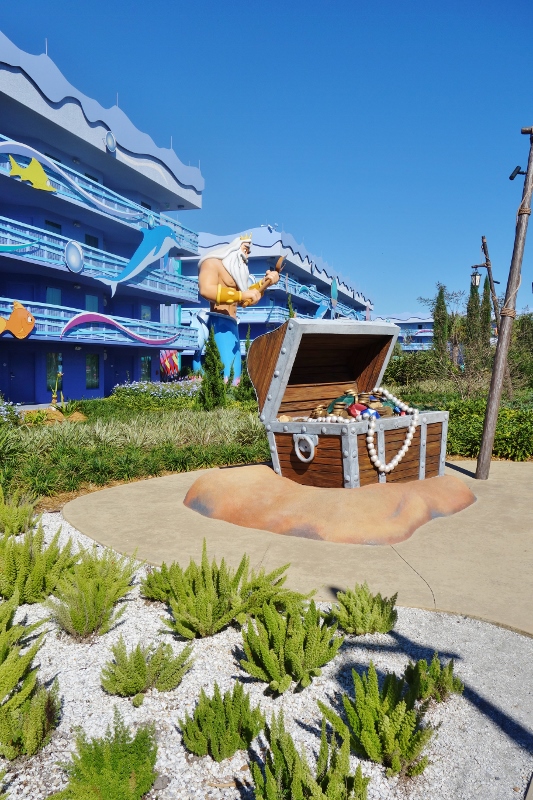 Triton outside of Building 9… 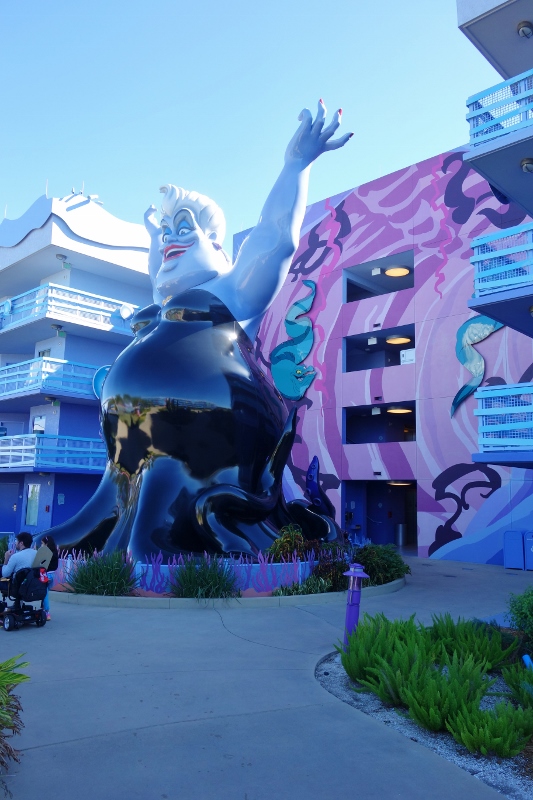 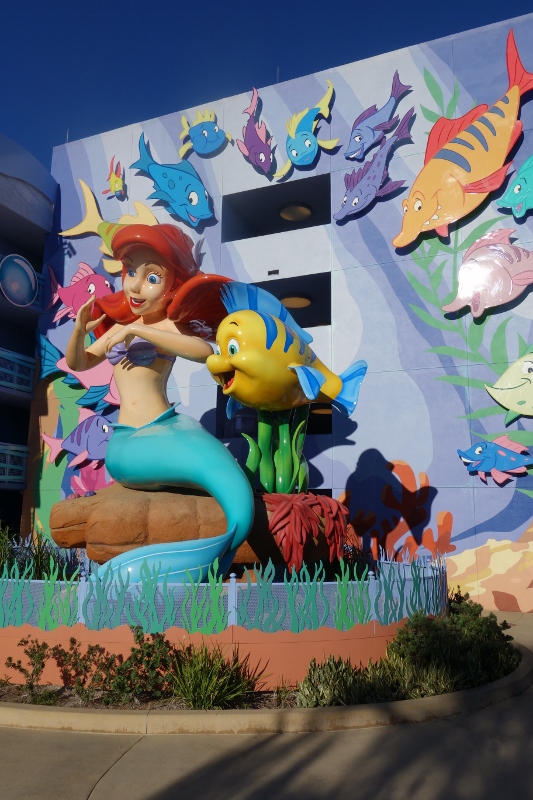 …and Ariel herself outside of Building 8. 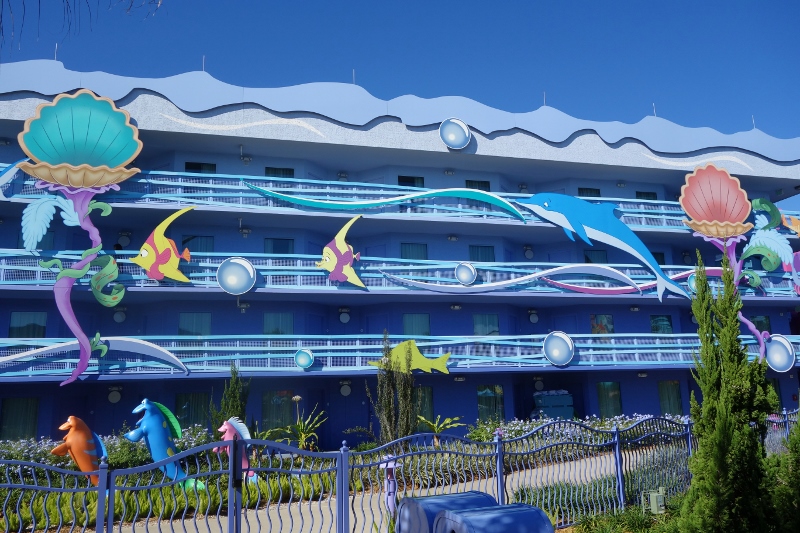 As at the other value resorts, attached to the facades of the buildings are other reminders of the theming.

What distinguishes the Little Mermaid area form the other value resort standard room areas is the pervasive theming inside the rooms themselves.

For example, the Little Mermaid Standard rooms are meant to be “under the sea.” 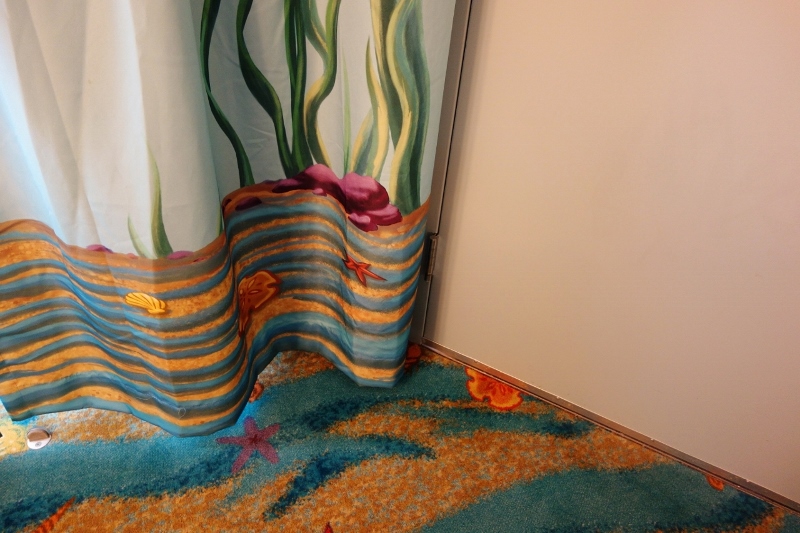 As a result, Art of Animation has the deepest level of Disney theming ever created in a hotel. If your kids like the movies it represents–Nemo, Little Mermaid, Lion King, Cars–they are going to love this place.

Convenience.  Convenience on this site means transportation convenience in carrying out its itineraries. By that standard, Art of Animation overall is tied with Pop Century Resort for being the most convenient value resort.

Among the values it shares with Pop Century both the most convenient buses and the only value resort access to Disney’s new Skyliner gondola system, which–after a transfer at Caribbean Beach–offers fun, simple routing to Epcot and Disney’s Hollywood Studios.

However, the standard rooms at Art of Animation are the least convenient of all this hotel’s offerings. 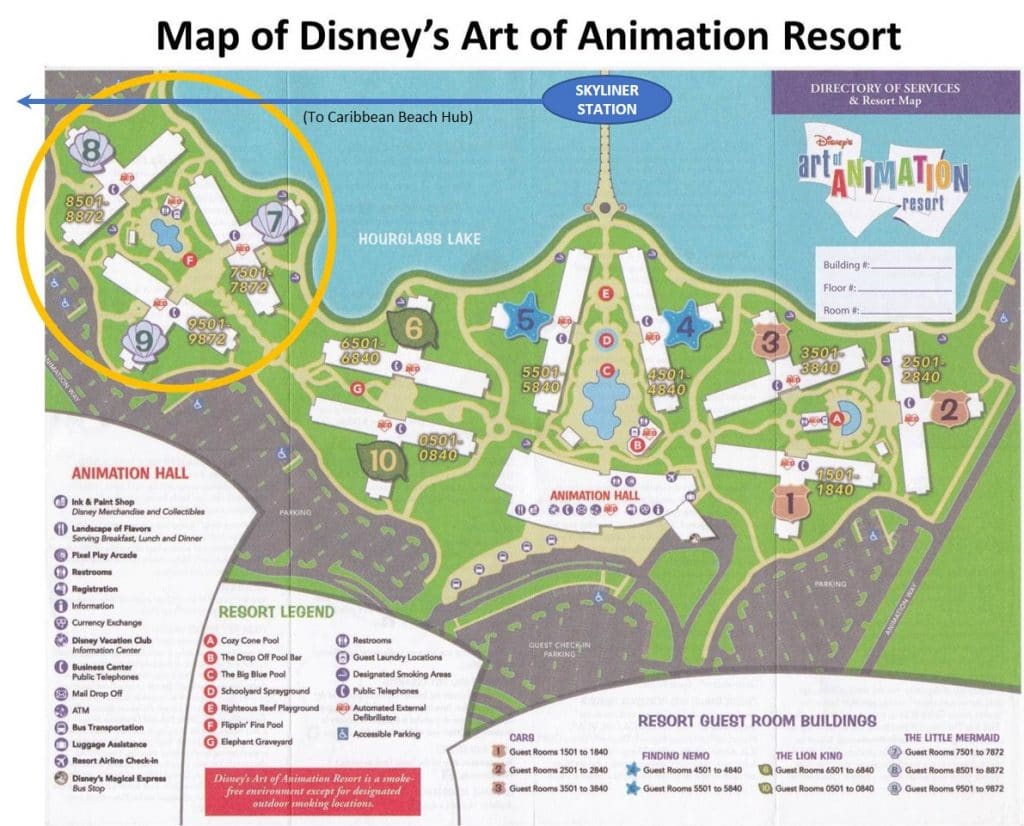 See the map.  The standard rooms at Art of Animation are all in the Little Mermaid section, highlighted with the orange circle.

These rooms are by far the least convenient offerings at Art of Animation, being five minutes further away (at worst) from the Skyliner station, central pool, food court and bus stop than other (Family Suite) Art of Animation options.

For most families, this extra few minutes won’t matter; but those with mobility issues might want to consider Pop Century, the next most highly ranked value resort, especially if they are targeting a summer visit or need the queen beds or coffeemakers found in its refurbed rooms.

At Pop, as at the other value resorts, rooms can be found that are much more convenient to the central resort services.

THE LITTLE MERMAID ROOMS THEMSELVES

Little Mermaid room layouts at Art of Animation are pretty much identical what was formerly found in standard rooms in the other value resorts.

However, refurbs at Pop Century, All-Star Movies, and All-Star Music have added queen beds and coffeemakers to those resort.  So the only clear comparable these days is All-Star Sports, which like these rooms still has full beds and no coffeemakers–but even All-Star Sports may be getting queens soon. 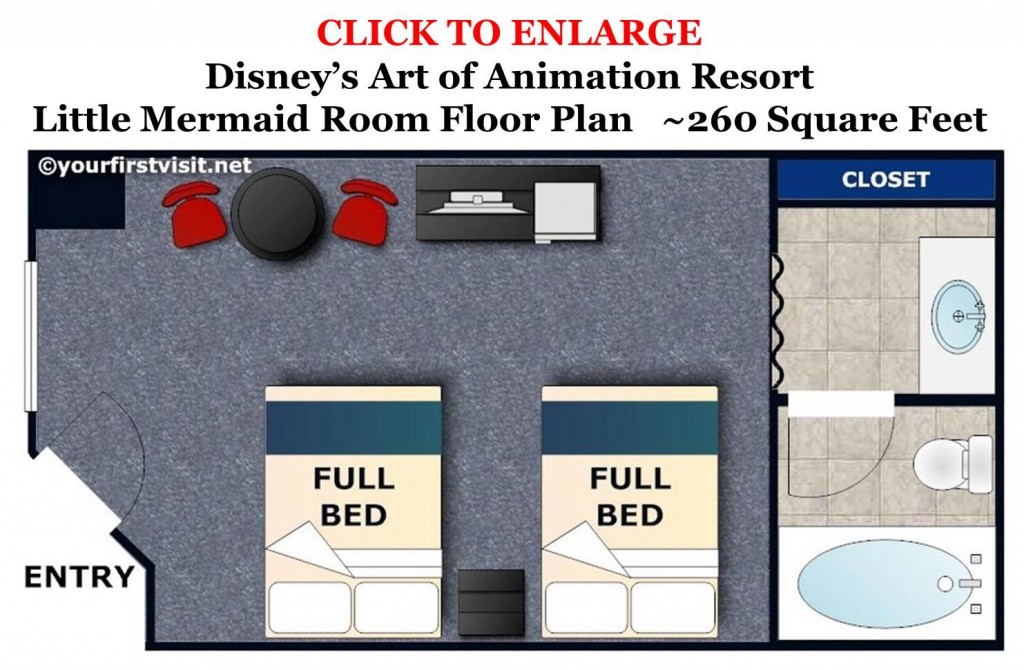 See the floor plan. These rooms have two full beds, a table and chairs, a dresser with a TV on top and a mini-fridge inside, and a divided bath. 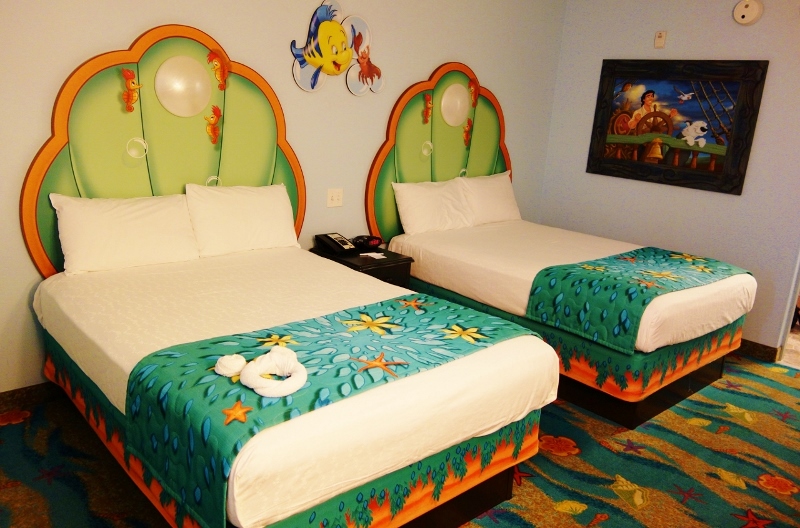 And as in the other value resorts, this room is about as small as it can be and still fit two beds.

Note that some says that these rooms are slightly larger than other value resort rooms, at 277 square feet, rather than 260.

In fact, these rooms are no bigger than those at the other value resorts.

My tape measure got all the major dimensions as within an inch or so of those at Pop Century.   For this room to have 17 more square feet, it would need to have been a foot and a half longer, or nine inches wider, or 6 inches more in both dimensions, or some such, than All-Star Music.

My measuring isn’t perfect, but I would have noticed that big a dimensional difference…so I’ve got it as 260 square feet, same as the other value resorts.

The Little Mermaid Section of Art of Animation has three buildings, numbered 7, 8 and 9.

Seven is the best, and 8 the worst.  Specifically, ask for an Hourglass Lake view room in building 7 closer to the Lion King area.  This will give you the shortest walk, least pool noise, and best views.

Distance. Building 8 is furthest from the Skyliner, central services and bus stop, Buildings 7 and 9 closer. 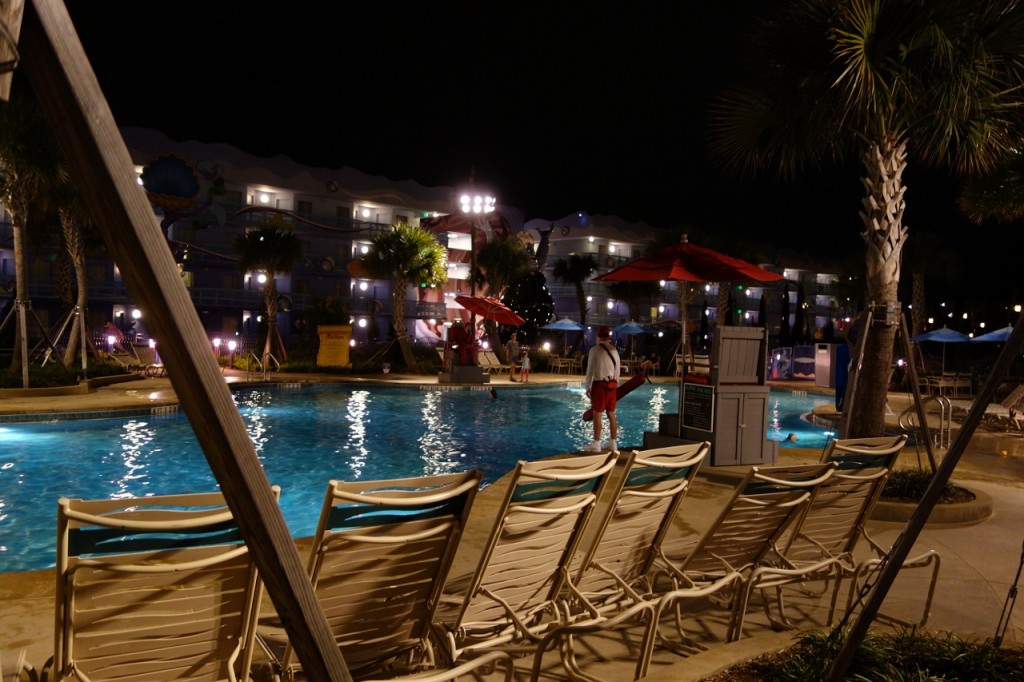 Noise.  Unlike in the Family Suites at Art of Animation, corridor noise is not much of an issue in the Little Mermaid section. This is because there are twice as many corridors, none is walled on all sides, none is air conditioned, and thus none has a real draw as a pathway to  the resort’s central services.

Noise, to the extent it is an issue, comes from the pool.  One-third of rooms in building 8, and one-sixth of rooms in each of 7 and 9, face the pool.

Views. Two thirds of the rooms in both buildings 8 and 9 have parking lot views; there are no bad views in building 7, though as noted above the pool-view rooms in 7 can be noisy.

Art of Animation and Pop Century are the only value resorts on a lake—Hourglass Lake separates the two.  While there may be some obtuse views of Hourglass Lake from a few of the pool-facing rooms of building 8, a third of building 7 rooms have a view of the lake. 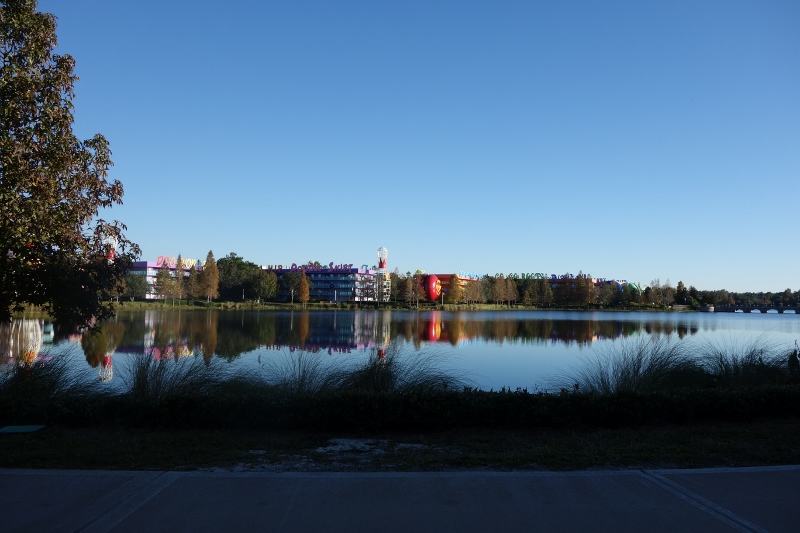 All in, building 7 is the best and 8 the worst of the Little Mermaid buildings.  So ask for a lake-facing building 7 room, as near the Lion King area as possible.  This will give you the shortest walk, least noise and best view!

The long-time travel agent partner of this site, Kelly B., can help you book your Disney World vacation at Art of Animation or anywhere else–contact her using the form below:

A PHOTO TOUR OF A STANDARD LITTLE MERMAID ROOM