Introduction to the Value Resorts at Walt Disney World 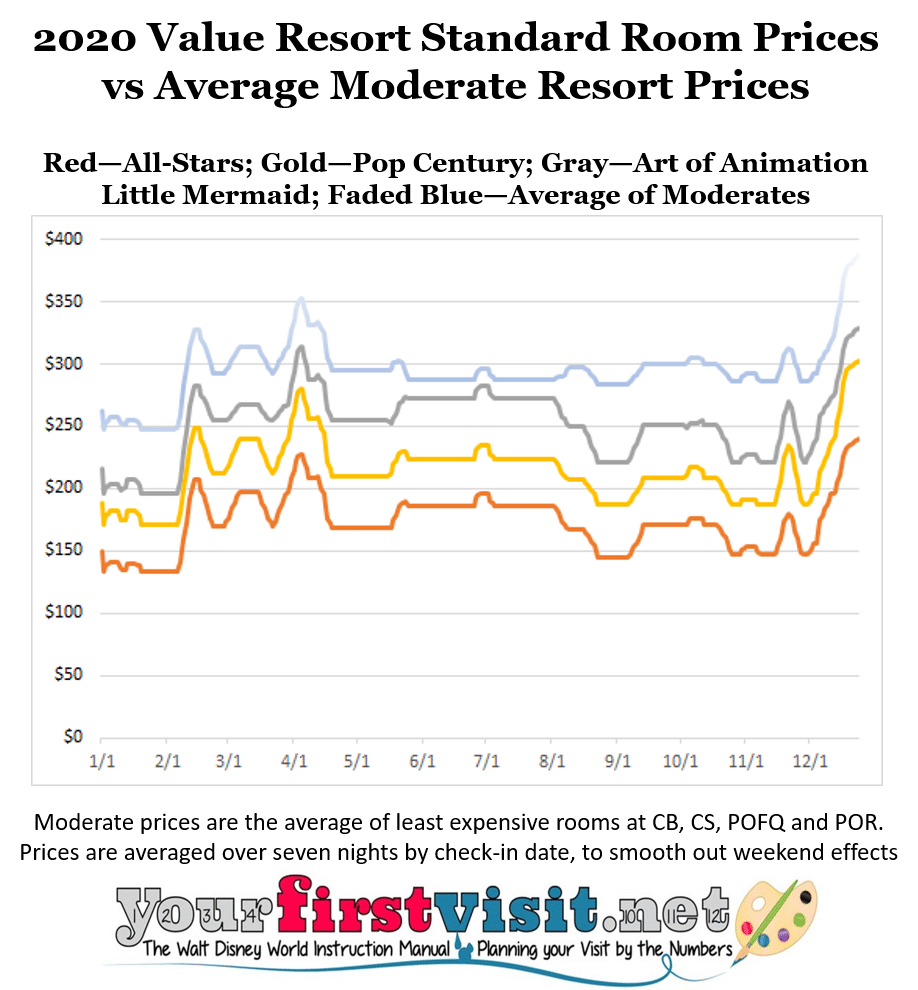 I’ve stayed at Disney’s Value Resorts more than 30 times since I opened this site.

These stays confirm the order in which the value resorts are recommended. 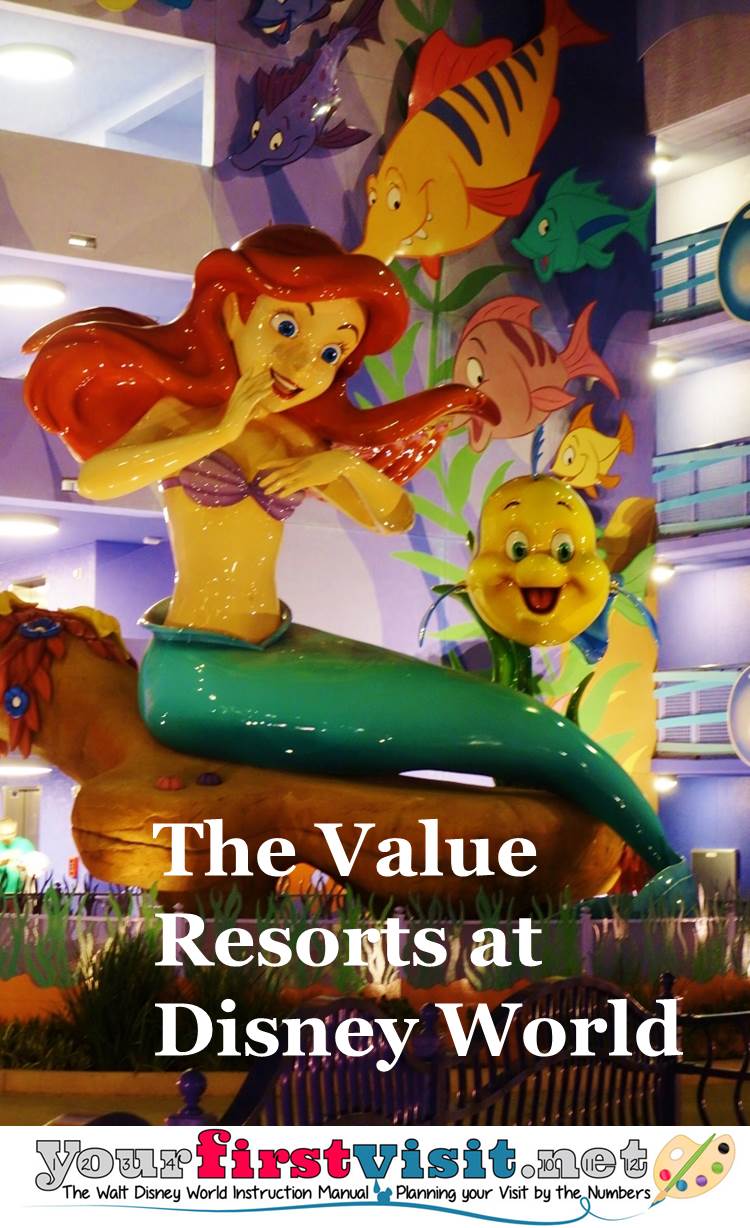 After a period in which there were only minor differences among the value resorts at Walt Disney World, over the past couple of years some significant differences have emerged.

Here’s 2020 prices at the values, and for comparison, the average of the moderates:

So the upshot is that while my basic order of recommended value resorts does not change, Pop Century looks more attractive than it had compared to Art of Animation, and All-Star Movies extends its lead among the All-Stars over Sports and the not-yet-refurbed parts of Music.

There are currently 5 value resorts at Walt Disney World:

The value resorts are the most recent resort class to have opened at Walt Disney World. 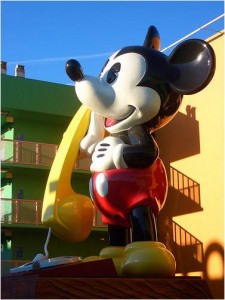 In the case of its launch of both the moderates and the values, Disney was concerned not only to successfully compete with off-site hotels (not hard, and devastatingly successful) but also to not lose revenue from guests trading down from the next higher resort price class.

The sharp lines at the values–their most distinctively different features–are their larger than life statues of toys, Disney characters, and such, their absence of coffeemakers (except in Pop Century, All-Star Movies, and, soon, All-Star Music), and their just barely life-sized rooms. 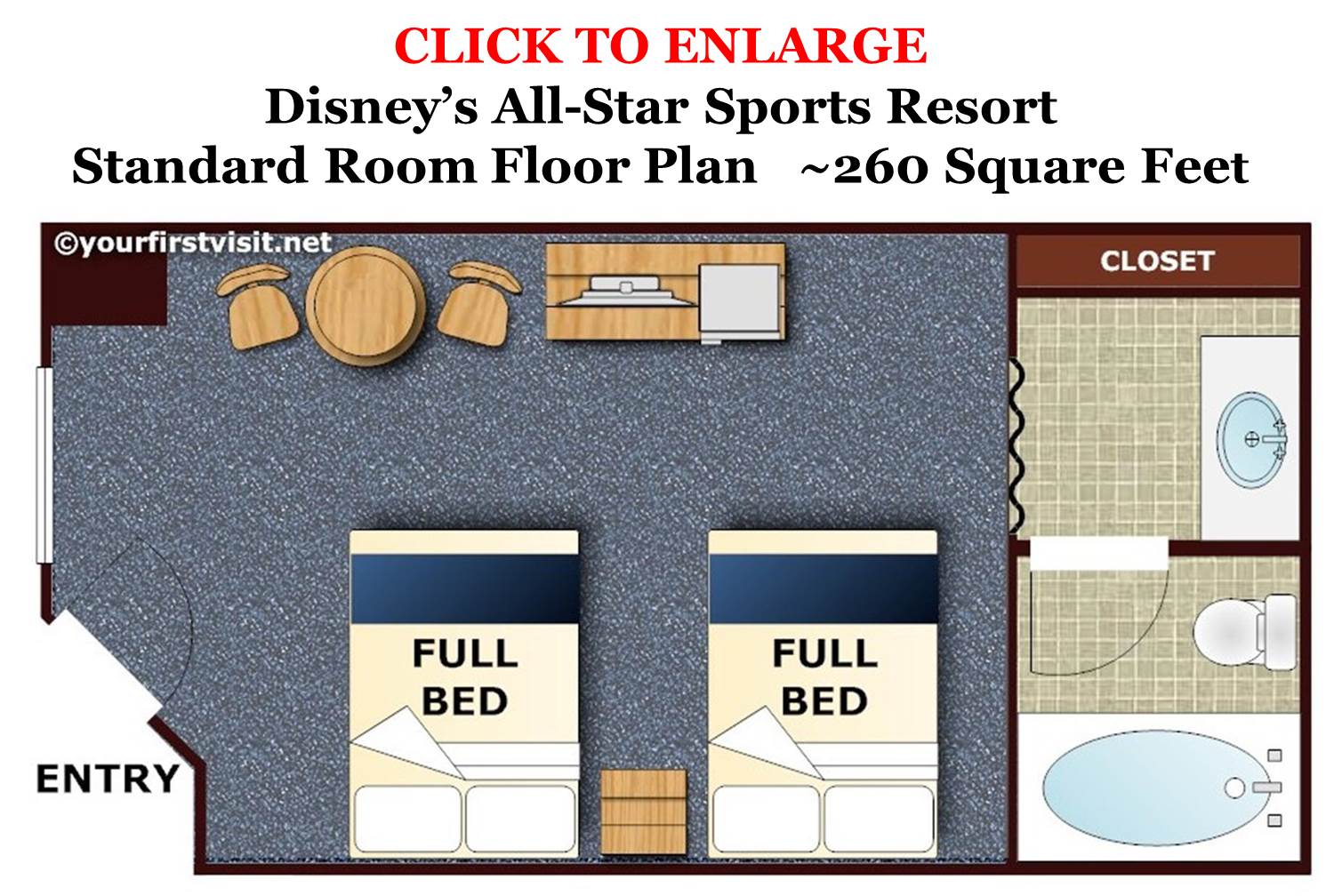 You may never stay in a two-bed hotel room smaller than the rooms in the value resorts.

Standard rooms at the value resorts have ~260 square feet.

While this may not seem like much less than the moderates’ space of 314 square feet, almost all of the difference is in the living space.

The living space of the values is about 80% as big as that of the moderates. Most of this missing space comes from the part of the room you are in when you aren’t in bed! 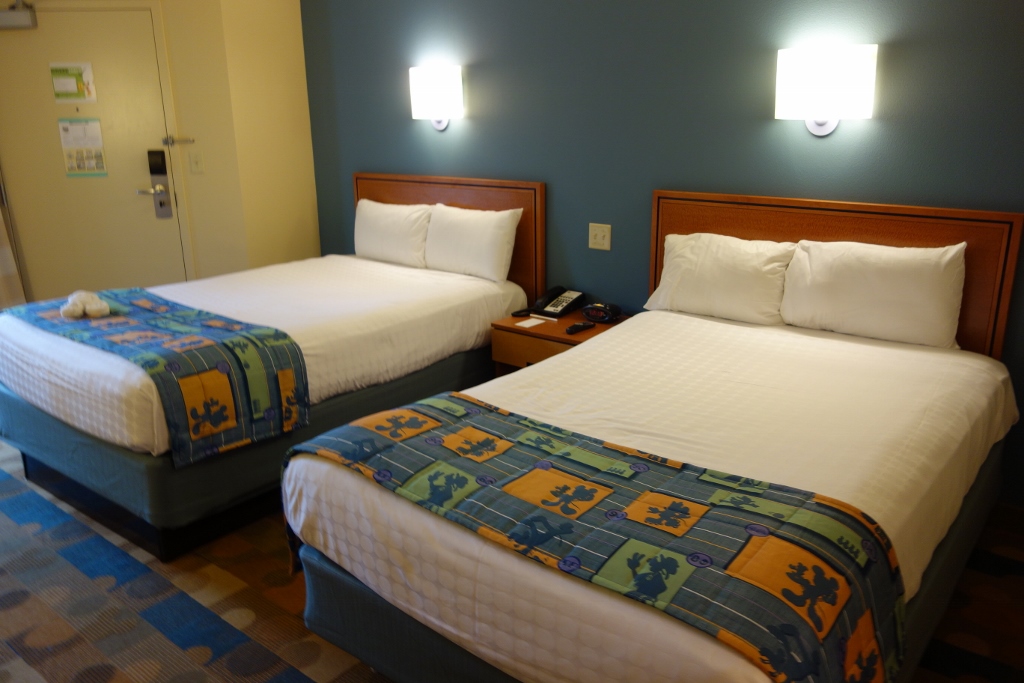 Some of this is from a narrower room, but most is from a shorter room.

These rooms are fine for first time family visitors who can’t afford a deluxe, as they won’t be spending much time in them other than sleeping.

But I can’t recommend them for returning visitors, unless they plan to be in the parks all day. Returning visitors who are likely to spend more time goofing off in or near their rooms should avoid the values, unless they have stayed in a value before and hence know exactly what they are in for, or their kids are really little, or their party size is only 3 people. 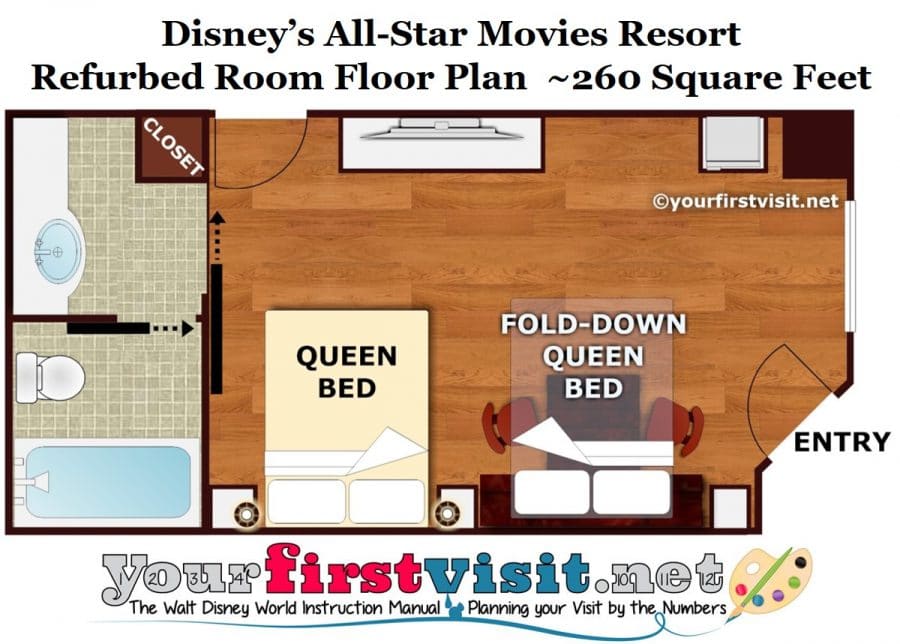 Many standard value resort rooms have two full beds–you’ll find full beds in standard rooms in all of Art of Animation and All-Star Sports, and most of All-Star Music. However, refurbed rooms at Pop Century and All-Star Movies have queens! All-Star Music has now begun this refurb. 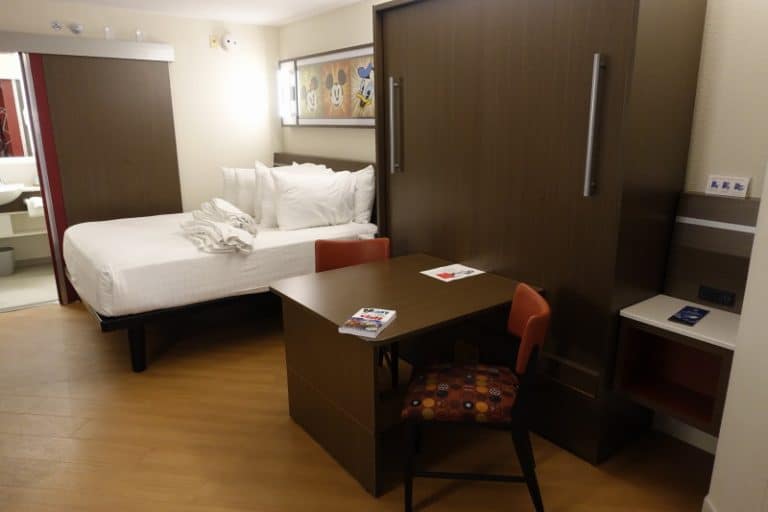 For more on comparative room sizes, see this. 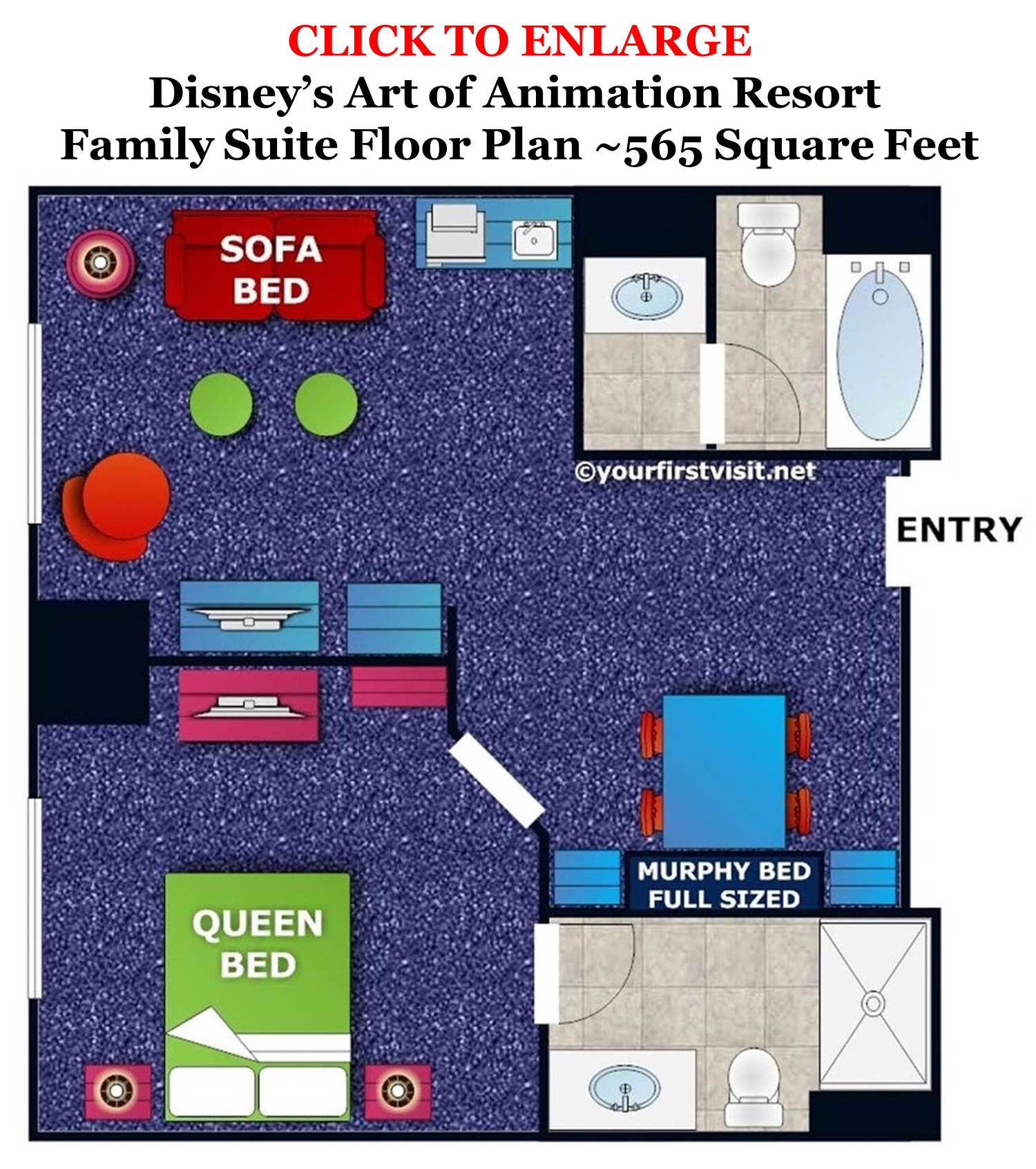 The family suites at All-Star Music and at Art of Animation are a different story.

Note that the suites at Music are being refurbed as well, and it looks like refurbed suites will have beds as comfortable as those at Art of Animation, at the cost of losing a bit of flexibility. 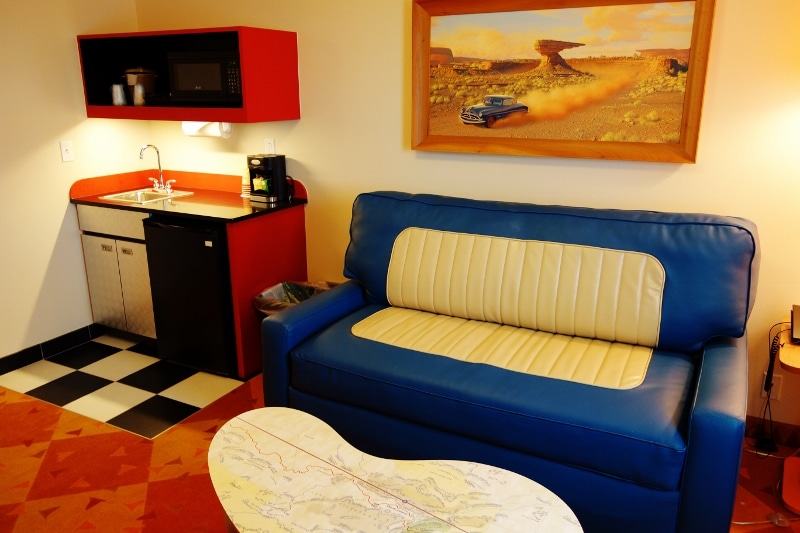 Compared to staying off-site, the value resorts are distinguished by their higher kid appeal, their convenience, and their access to certain key perks that off-site hotels can’t provide. 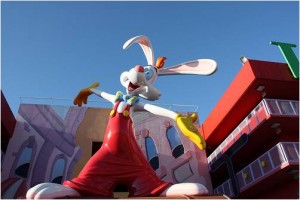 All of the value resorts–Disney’s All-Star Sports, All-Star Music, and All-Star Movies, and its Pop Century and Art of Animation Resorts–have terrific kid appeal.

This appeal comes from the approach to theming they all share: bright and vibrant exteriors, framing much larger than life objects of interest to kids.

These objects reinforce that these resorts were designed for the sake of kids…and not necessarily for adults!

Prices vary over the course of the year, but Art of Animation rooms are always the most expensive, and the All-Stars the least expensive.

Detailed reviews of each option can be found at the links; the hotels are listed in order of how strongly I recommend them.
Standard 4-person rooms:

The long-time travel agent partner of this site, Kelly, can book your Disney vacation into one of these value resorts–or any other Disney World option!  Contact her using the form below.