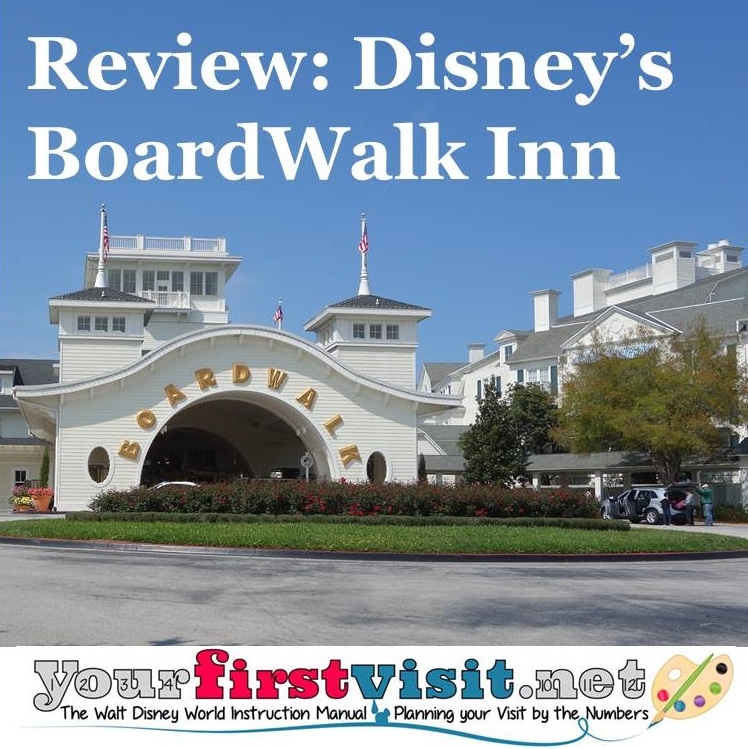 Note: guests at Disney’s Boardwalk Inn are eligible for Disney World’s Early Entry program, for early access to its paid individual system for access to certain rides, and for its Extended Evening Hours.

Our most recent stay (in December, our sixth at the BoardWalk Inn since I started this site) confirms that Disney’s BoardWalk Inn, one of the Epcot resorts, is the eighth best deluxe resort at Walt Disney World for first time family visitors.

(It can be a great choice for returning visitors, especially for a trip focused on Epcot and/or Disney’s Hollywood Studios.) 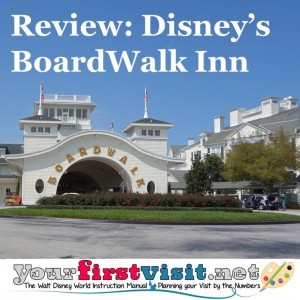 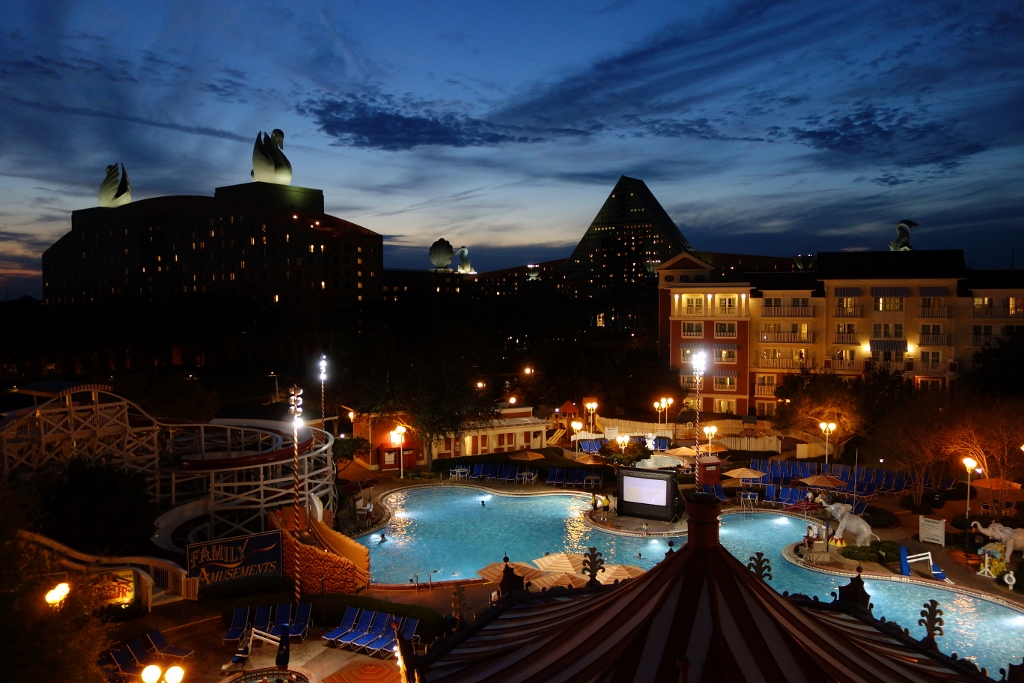 Among the deluxe resorts, Disney’s BoardWalk Inn has a lot of positives.

It also has a couple of negatives, also largely shared with the Yacht and Beach Clubs. It’s thin on kid appeal compared to other options, is not as convenient for this site’s itineraries as some alternative resorts (although it is very well located for visits focused on Epcot and/or Disney’s Hollywood Studios), and has limited counter service in general and especially limited breakfast options. 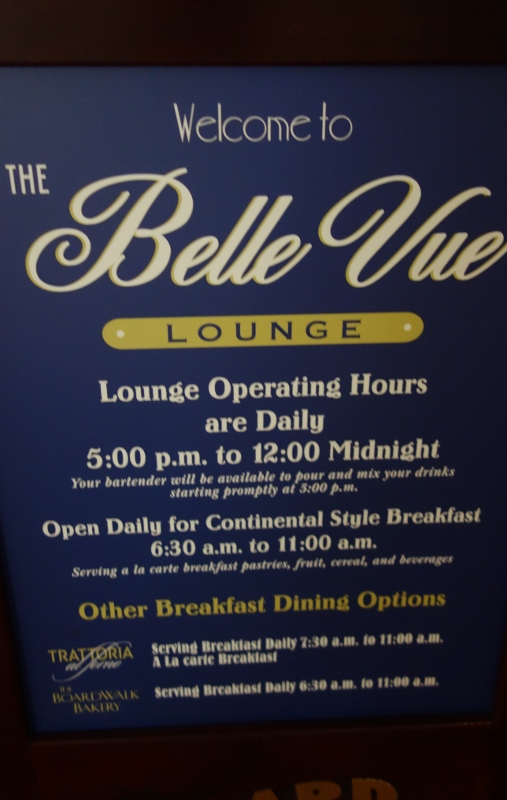 The breakfast issue is better than it has been in the past…see the image…but it’s still not as good as many guests would expect.

The summary review continues below. 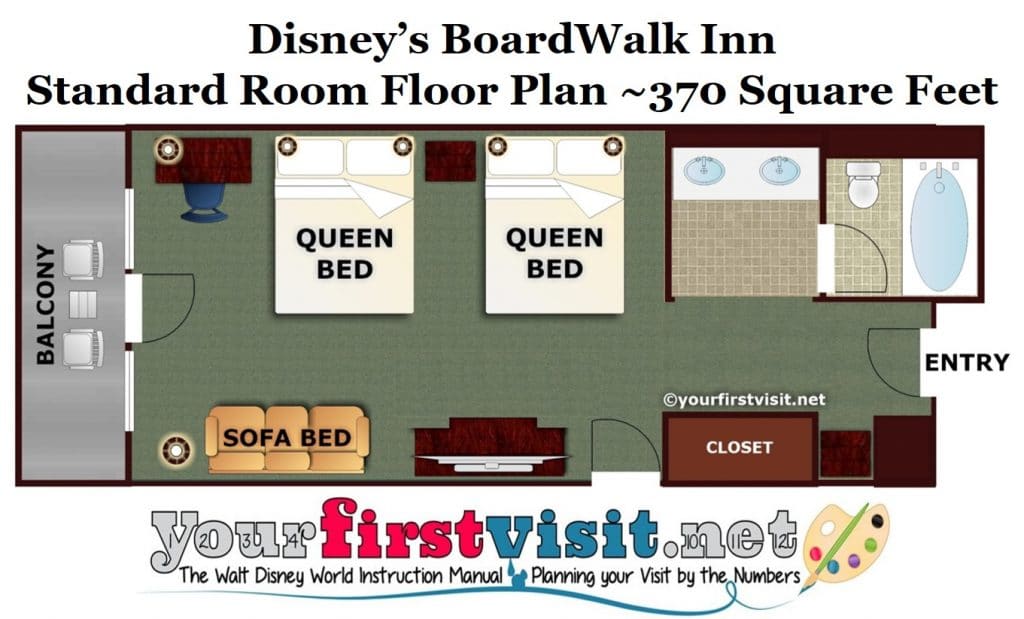 Standard rooms at Disney’s BoardWalk Inn are sized in the middle of the deluxe resorts. 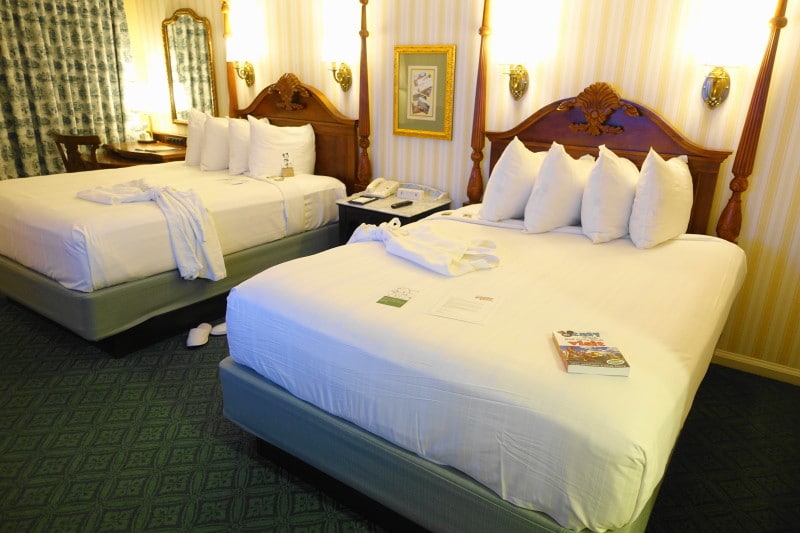 Refurbed in 2014, most of these rooms sleep five–two each in two queens, and another in convertible couch with a 72 inch mattress and 6’3″ of sleeping length. Rooms with one king bed are also available.

For a photo tour of a standard BoardWalk Inn room, see this. For other room types at the Inn, see this.

Unusually, there’s no real dining inside the hotel.  Outside, on the BoardWalk, you’ll find multiple dining venues operated by third parties.

None of these except the Flying Fish offers distinctive dining for adults, and none except for breakfast at Trattoria al Forno has particular kid appeal.

There’s not much in the way of counter-service, either. For all the latest offerings, see this.

For more on dining at the BoardWalk Inn, see this.

THE POOLS AT DISNEY’S BOARDWALK INN

The BoardWalk Inn has three pools–two un-themed quiet pools, and a large themed pool, the Luna Park pool, mean to remind you of seaside amusement parks from early in the twentieth century.

The Luna Park pool has everything you’d expect of a Disney World deluxe pool, but pales compared to Stormalong Bay at the nearby Yacht and Beach Clubs.

For more on the BoardWalk Inn’s Luna Park pool, see this.

On this basis, Disney’s BoardWalk Inn is the eighth-best deluxe resort for first time family visitors to Walt Disney World.

The kid appeal of the BoardWalk Inn, such as it is, comes from largely its pool, not its design, architecture, or theme. And if you were to pick an Epcot resort based on it’s pool, it would not be the BoardWalk Inn–it’d be the Yacht or Beach Club, because of Stormalong Bay. 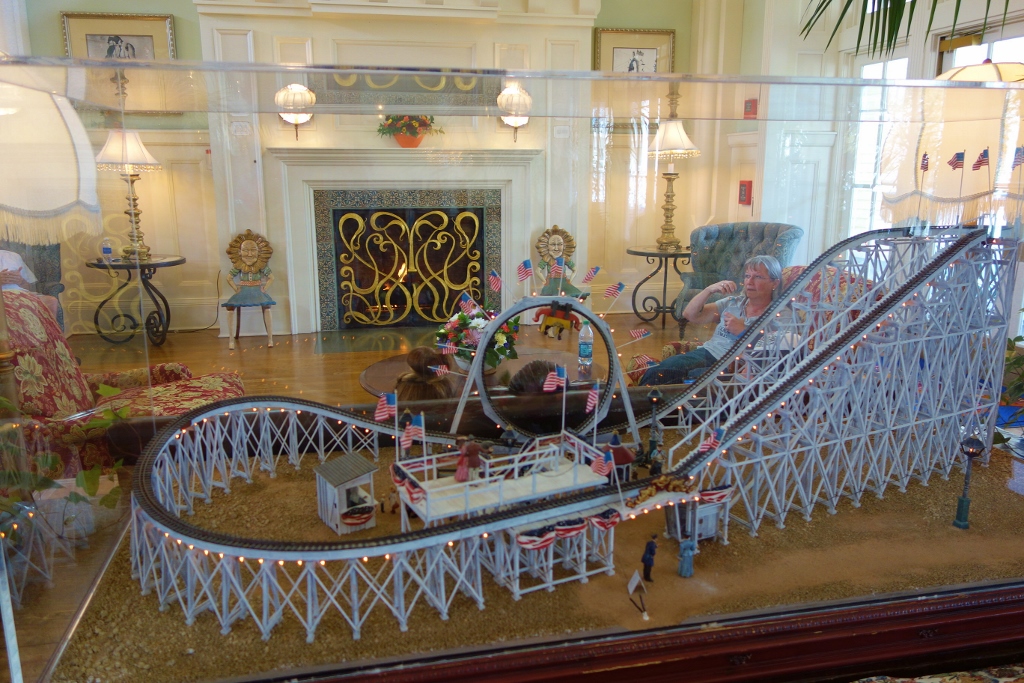 That said, there are some fun artifacts, such as a model of an old-time roller coaster, that will catch the eyes of kids. 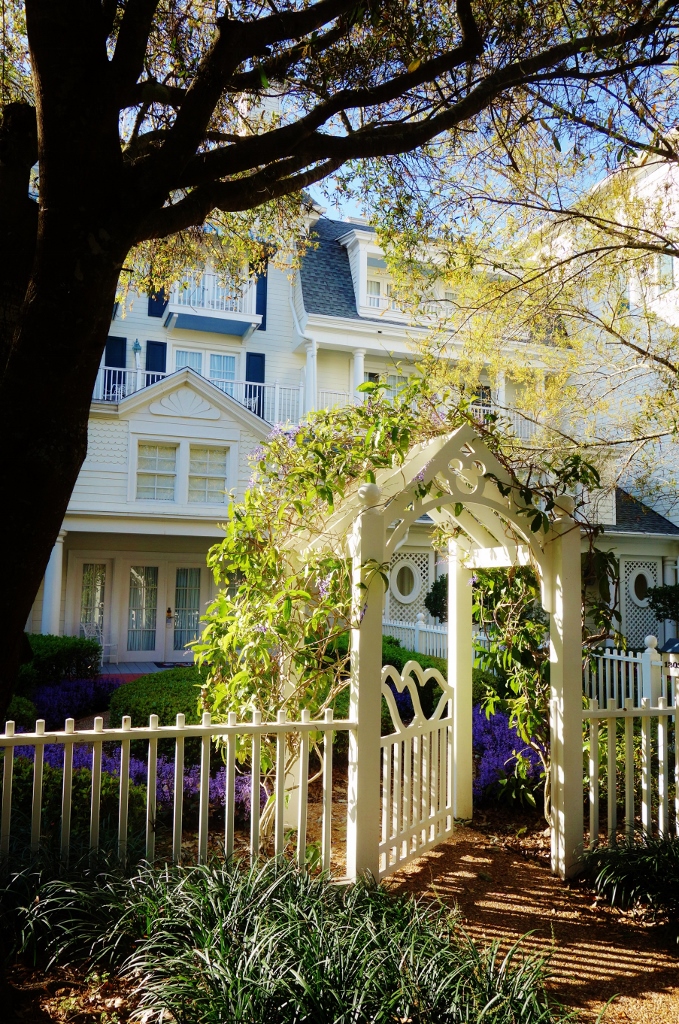 Parents will delight in the BoardWalk Inn–it has a combination of peaceful, quiet green spaces and a bustling (though largely undistinguished) restaurant row that no other Disney World deluxe resort can match.

Kids, though will find it a yawn compared to resorts with higher kid appeal.

Disney’s BoardWalk Inn is the fifth-most convenient of all the Walt Disney World resorts in carrying out the itineraries for first-time family visitors on this site.

The other two parks are accessed by buses, which are shared with some of the other Epcot resorts.

WHERE TO STAY AT DISNEY’S BOARDWALK INN 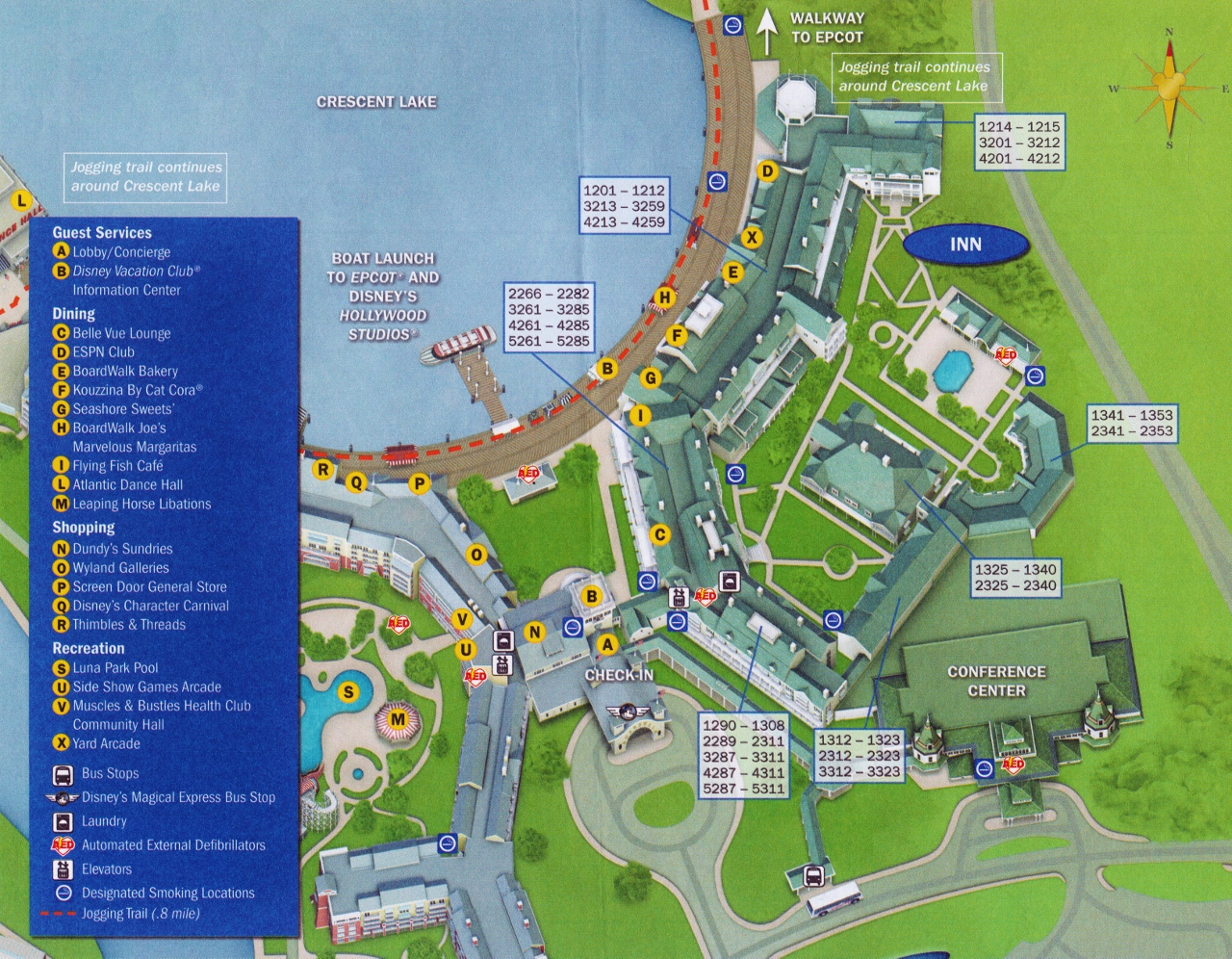 The main entry to both is at the center, and the wings that contain the BoardWalk Inn rooms are at the right.

Rooms at the ends of the wings can be quite a hike from the elevator bank near the center of the figure. 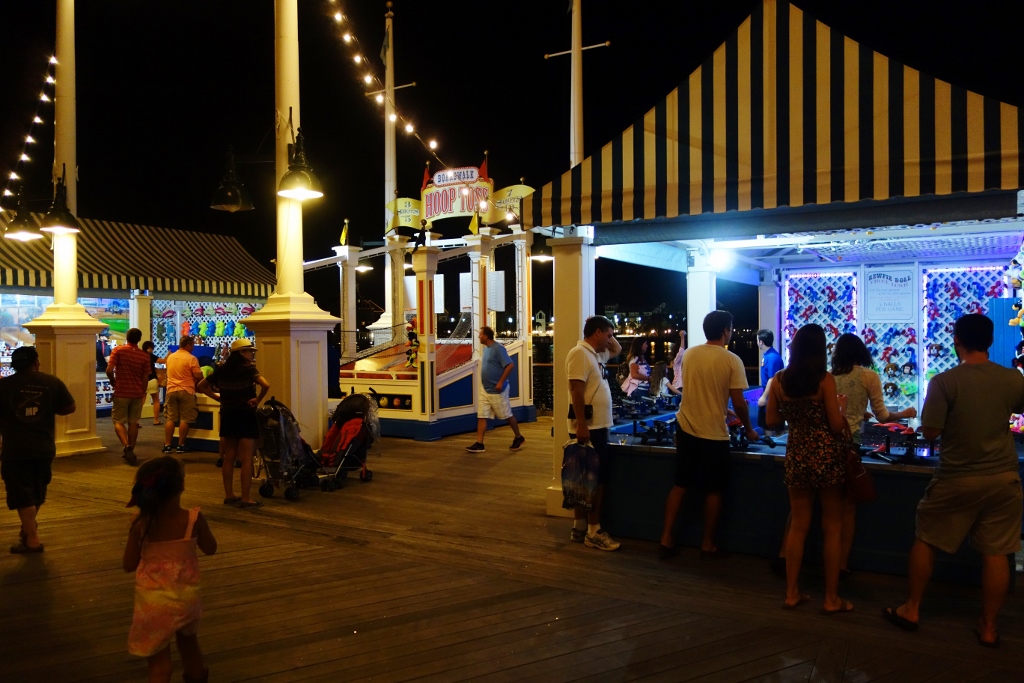 Rooms with water views of the Crescent Lake also overlook the BoardWalk dining and entertainment area, and can suffer from noise from it.

Some upper floor courtyard view rooms have partial views of the Epcot fireworks.

So request either a room near the lobby, with a Courtyard view, or a room with a view of the Epcot fireworks.

Families seeking the highest degree of kid appeal. Families too large to fit its 5 person rooms.

Kelly, the long-time travel agent partner of this site, can book you Disney’s BoardWalk Inn–or any other Disney World hotel.  Contact her using the form below:

PAGES IN THIS REVIEW OF DISNEY’S BOARDWALK INN