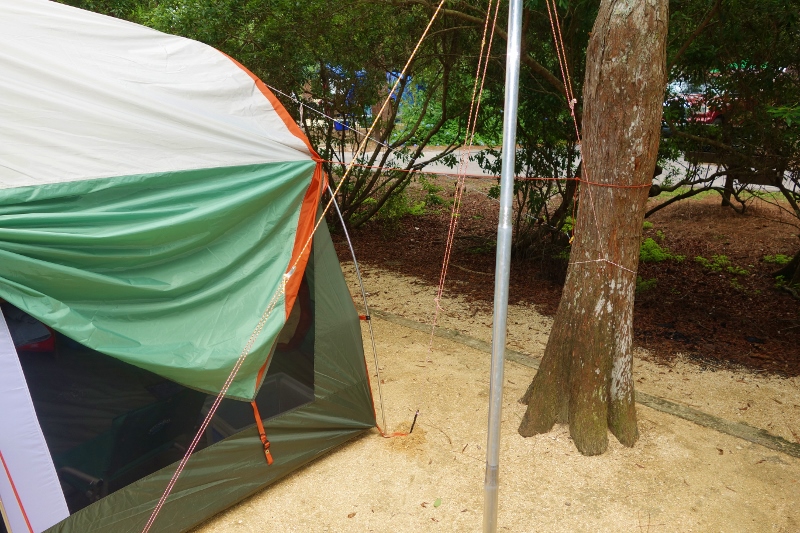 (For the first page of this review of Disney’s Fort Wilderness Resort, click here.)

TENT CAMPING HINTS FOR THE CAMPSITES AT FORT WILDERNESS: GEAR AND WEATHER

Even experienced tent campers need to bring the right gear to Fort Wilderness, some of which might be uncommon to their camping styles elsewhere.

And everybody except experienced Florida tent campers needs to think hard about the weather.

Things to keep in mind when gear planning are the sun and heat, common thunderstorms–daily some times of the year–and the sand tent pads. 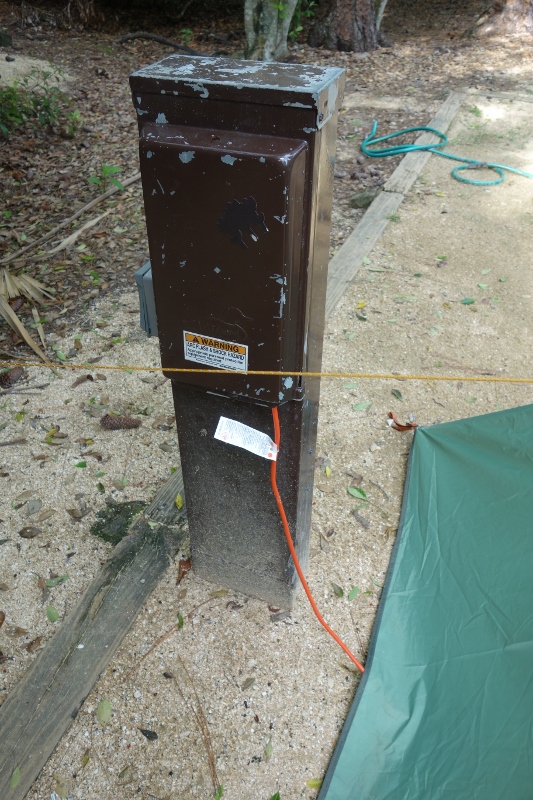 It can get really, really hot (and humid) in Orlando. So take advantage of the fact that every site has electricity and bring some extension cords and fans. I set up two electric fans for a cross-breeze, one bringing air into and one blowing air out of my tent, and used a battery-powered hanging fan in the peak of my tent to help exhaust hot air. 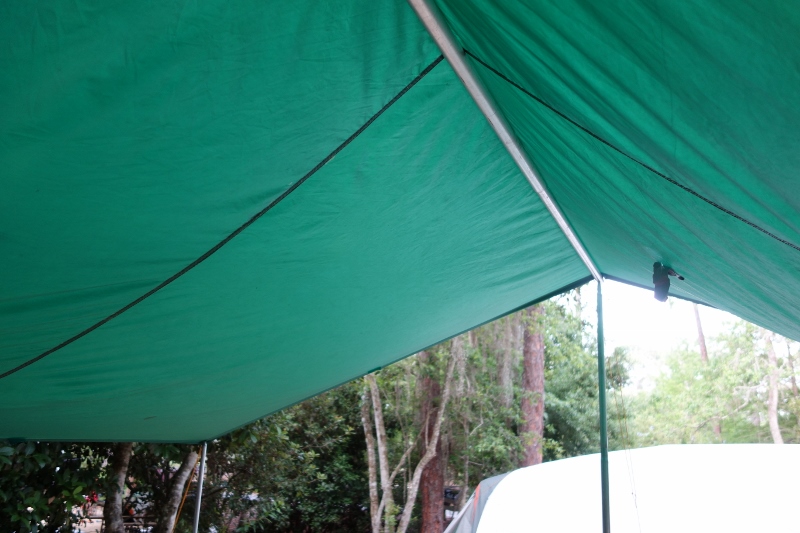 The sun and rain can really bear down in Florida, so absolutely bring several tarps that you can cobble together into both a dining fly and tacked-on sunshade/blowing rain protector system.

I’m not as keen on self-supporting flies as I am on traditional pole and guy flies, as pole and guy rigs are more forgiving in strong winds.  I’ve had three self-supporting flies break on me in storms, while in the same wind a tarp will simply lift off its poles and be easy to set up again (after the wind dies…and after you find it, if you forgot to have at least one guy tied to directly it, rather than simply looping over the pole).

Another rain point–traditional family tents with partial rain flies covering just the top of the tent can be less than adequate in the weather you might face.

Much better is a mesh inner tent with a full-coverage fly, similar in design to a traditional backpacking tent. Roll up the fly in fine weather, bring it down in storms.

Family tents with full coverage rain flies can be hard to find. I love my REI Kingdom 8, which is perfect for Florida camping.

Here’s all the mesh without the fly: 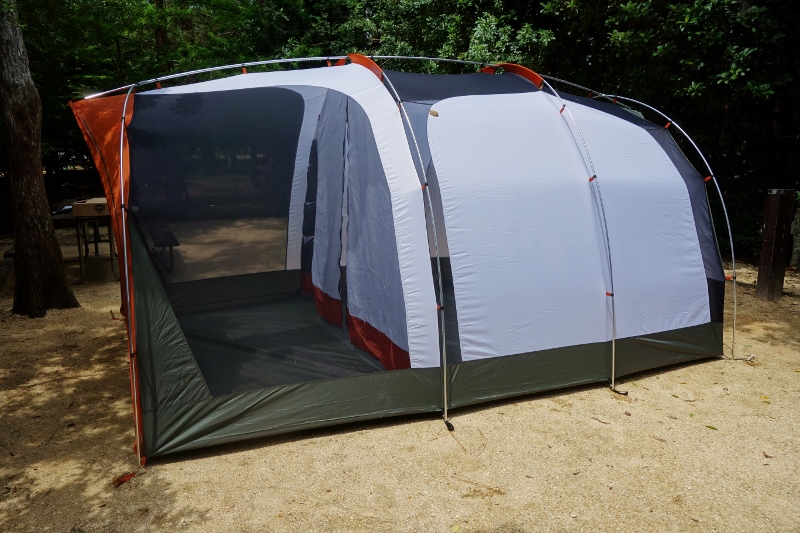 …and here it is with the full-coverage fly fully deployed: 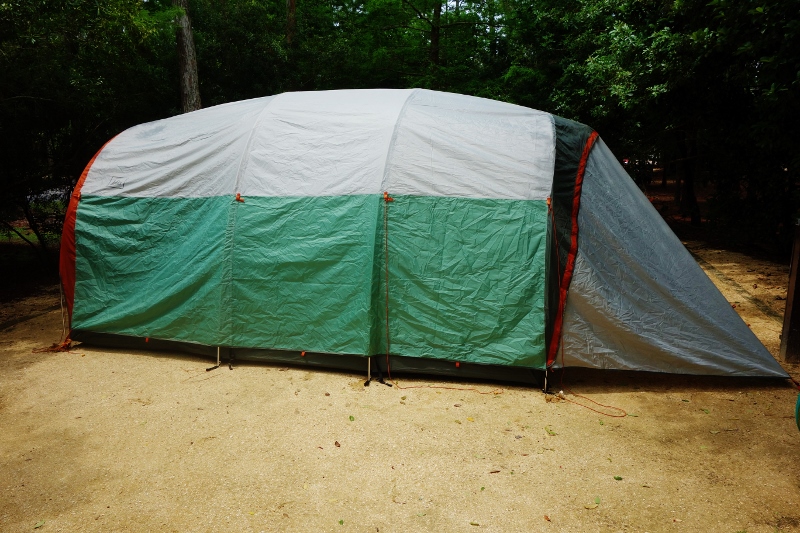 This tent system, when coupled with the fans noted above, can defeat any weather issue except humidity. 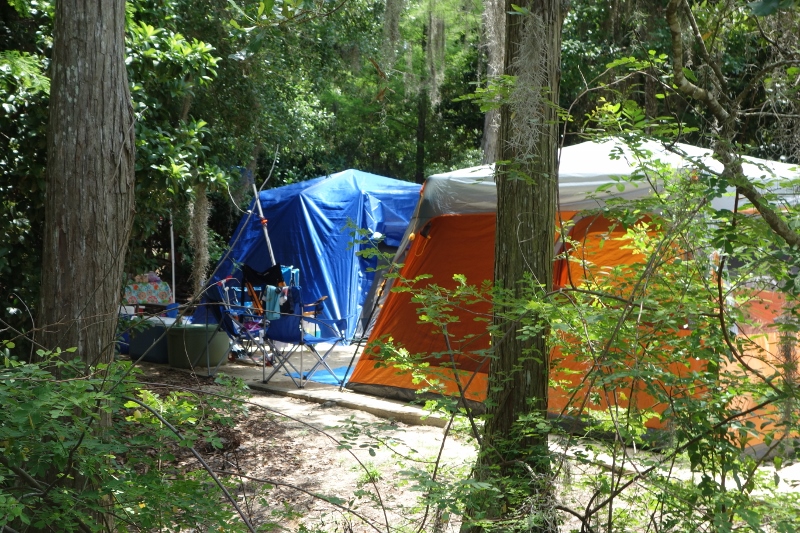 If you can’t afford a new tent, then bring a really big blue tarp that you can use in a pinch as a full-coverage fly–see the tent on the left above–enabling you to both avoid the rain and also open your tent’s windows beneath it and get some air into it during a storm.

The not-uncommon windy storms, when combined with the sand tent pads, means you need to bring extra guys and some sand stakes. 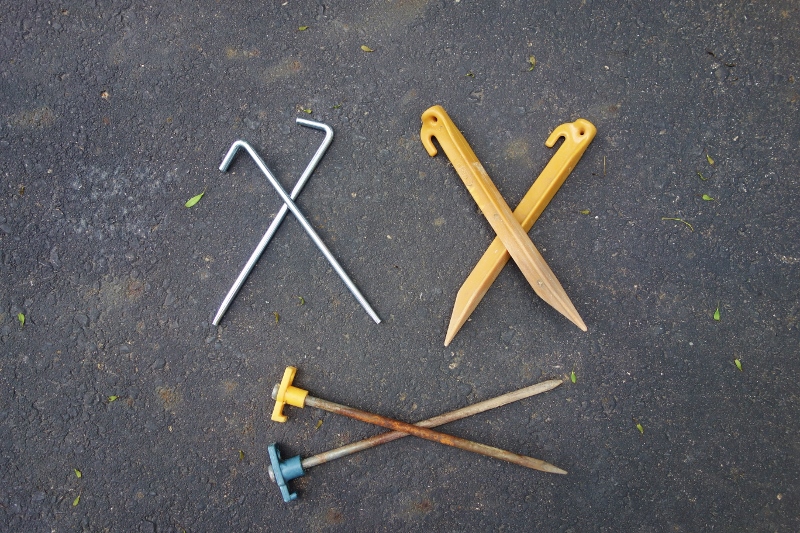 Traditional stakes–such as those shown above–simply won’t stay in the sand when the wind is blowing.  The metal versions won’t even stay in the ground under simple tension. 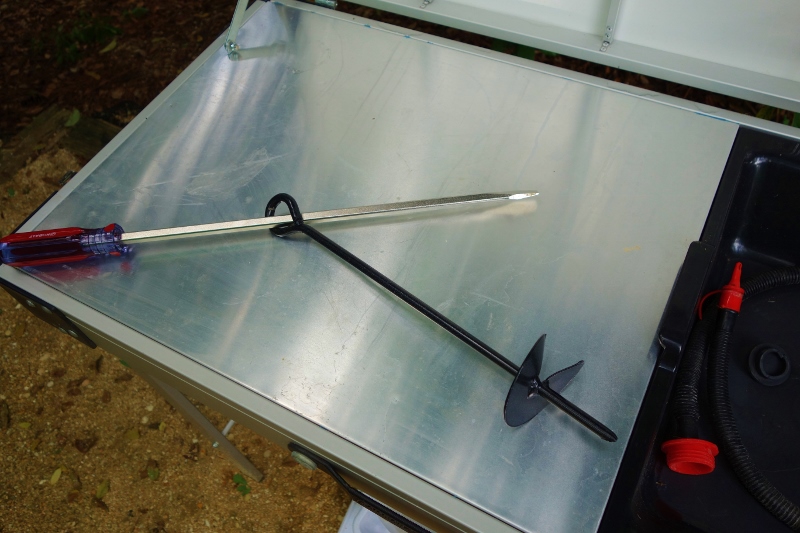 After  a number of failed experiments–some kinda comic–I’ve settled on the screw-in sand stake shown at the right above (thanks John Koch of Troop 194–you know why!!).

You literally screw these into the ground, so need something to spin them with and give you torque–thus the 15 inch screwdriver on the left, which also works great as a barbecue poker.

You also need something to link the loops at the end of the stakes to your stake loops or guy lines.  For this you could use good carabiners or cord. 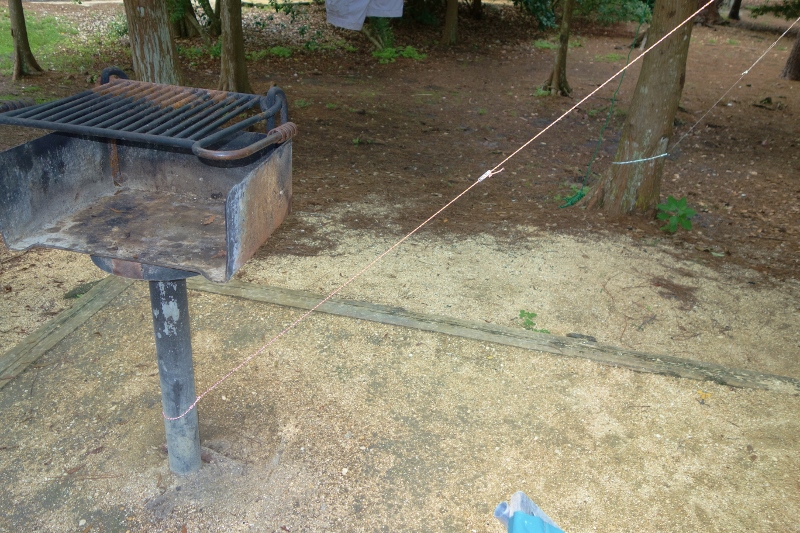 Also bring extra guy lines–and of course, where you can, anchor them to fixed parts of the terrain, to avoid having to spin down all those darn sand stakes. Here, at one corner of my dining fly, I have the pole guyed to two fixed points–the barbecue and a tree–and thus don’t need to screw in a sand stake here.

Don’t forget extra guys and sand stakes for your tent!

Modern free-standing designs don’t need them to stand up in no wind–but when the wind blows, without stakes and/or guys, in a storm such tents become “free-ballooning.” I’ve seen un-staked, un-guyed free-standing tents blow away with infants inside…

Fort Wilderness resort tent campsites are commonly the least expensive way to access all the perks that come from staying at a Walt Disney World resort, and, since they can be booked for ten, are  by far the cheapest way to bring a large family to Disney World. 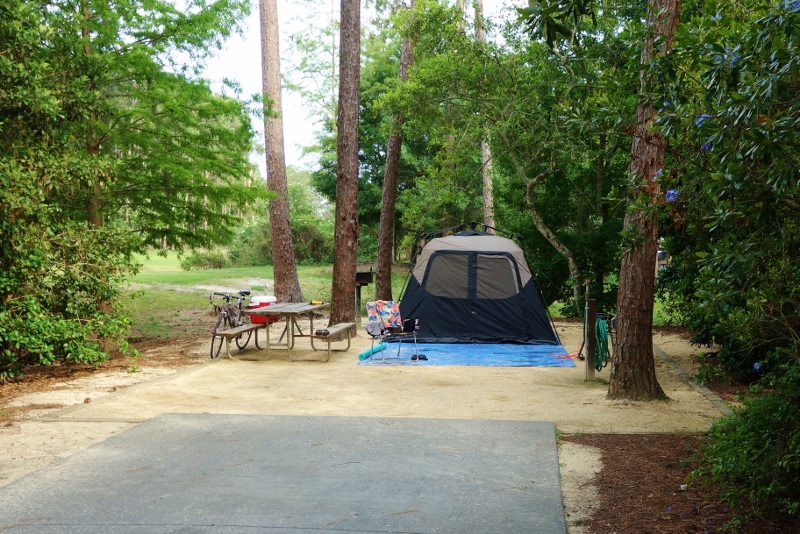 As a result, too often I see families at Fort Wilderness with a tiny tent with lousy rain protection, a cooler, a bag of charcoal–and that’s it. If they have a ground cloth, they are using it the worst possible way. No flies, no stakes, no guys, no stove, no cooking gear, no cleaning gear, no chairs, no lanterns, no power cords, no fans….

And then the first morning after a storm I see their site abandoned, with their tent stuffed in one of the campground’s trash cans!!

Don’t do this. Gear up for and then test your gear in a better climate first, and only then come to Fort Wilderness with all the extra gear I’ve noted above.  (There’s more on the gear we bring later in this review.)

There’s a couple of points of Orlando weather to keep in mind when planning a tent camping trip to Fort Wilderness.

So add up the months and you’ll see that the safest months to comfortably tent camp at Walt Disney World are May, December, and January.

That said, no one that I am aware of has ever been injured at Fort Wilderness by a hurricane or a tornado.

I would personally be more concerned about the two tornado seasons than about the hurricane season.

Hurricanes come with substantial advance warning, and Disney shuts down Fort Wilderness when it seems to be in the path of one, moving guests to other Disney resorts. Moreover, they are much less common in June-mid-August, and late October-November.

Based on this, I’d add later October and November to the list of “safe” months for tent campers. (June-mid-August remain in the summer tornado season, and anyway are far too hot for me to consider recommending tent camping then…)

Tornadoes, on the other hand, come with much less notice, and in the winter-spring tornado season, if they do happen, commonly happen in the middle of the night.

I wouldn’t dream of tent camping at Walt Disney World in either tornado season without a tested emergency weather radio, and without doing a test run in the dark to the nearest comfort station, which likely would make a much better hurricane shelter than my tent or car.

All in, my  recommended months for tent campers at Fort Wilderness end up being mid-October-January, and May.

Owners of pop-ups should follow the thoughts shared for tent campers; smaller trailers and Class Bs have some of the same vulnerabilities.

Larger trailers, Class As and larger Class Cs are less vulnerable…but if it were me, I’d still avoid the winter-spring tornado season, and the peak of the hurricane season.

previous post Suggestions for Your First Trip to the Disneyland Resort, Continued
next post Mail and Comments: Large Families and Staying Off-Site