Chance of Hurricane Affecting Florida during Visit by Arrival Date 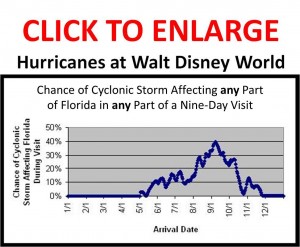 The thumbnail (click to open) illuminates the chance of a cyclonic storm affecting any part of Florida during any part of a 9 day visit to Walt Disney World.

It’s by arrival date, and is based on 30 years of data.

The takeaway is that a 9 day Walt Disney World vacation has the biggest chance of being affected for arrival dates in late August through early October.

Ninety percent of activity is from August through October; 50% between August 20th and October 10th; and the peak of the storm season is September 10th.

It is unusual for a Disney vacation to be ruined by a cyclonic storm–but it happens.