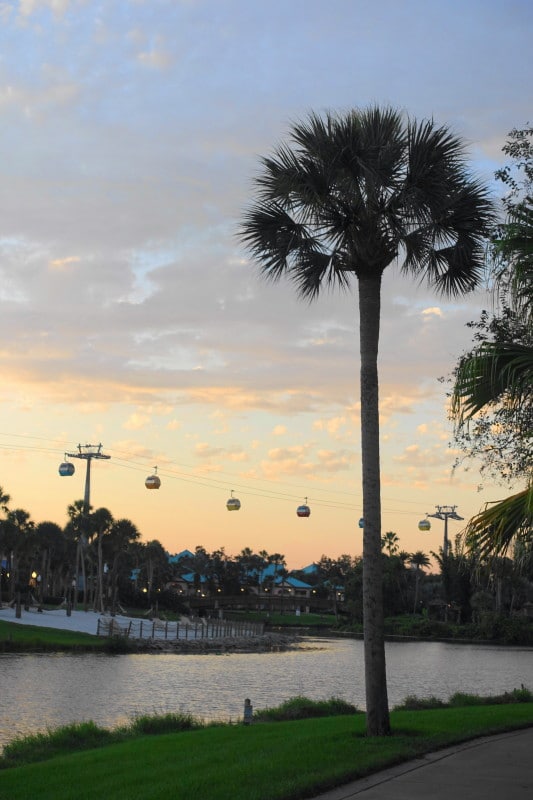 THE PIRATE ROOMS IN TRINIDAD 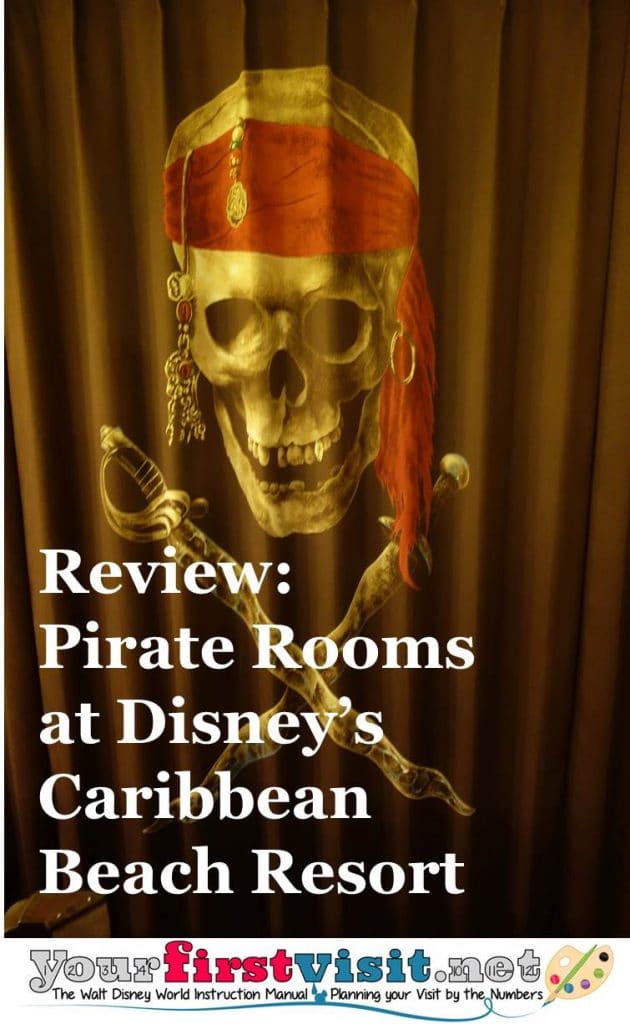 It gets that position because it has a little more kid appeal than the other moderate resorts.

For example, it has

Moreover, the former substantial inconvenience of these rooms (they are the furthest of all Caribbean Beach options from the central dining, main pool and shopping at Old Port Royale) had been diminished by

On the other hand, these rooms remain the only standard rooms at any Disney moderate with full rather than queen beds. Also, they sleep only four–unlike the five person rooms available elsewhere at Caribbean Beach

Trinidad in particular has always felt isolated from the rest of Caribbean Beach–over a bridge, out of sight.

In response, a few years ago, Disney World tried to turn lemons into lemonade, and redid the rooms in Trinidad to a pirate theme, at a higher cost–for example, standard view pirate rooms are (including tax) $376 a night on weeknights during the Fall 2020 price season, compared to $290 then for standard rooms elsewhere at Caribbean Beach. 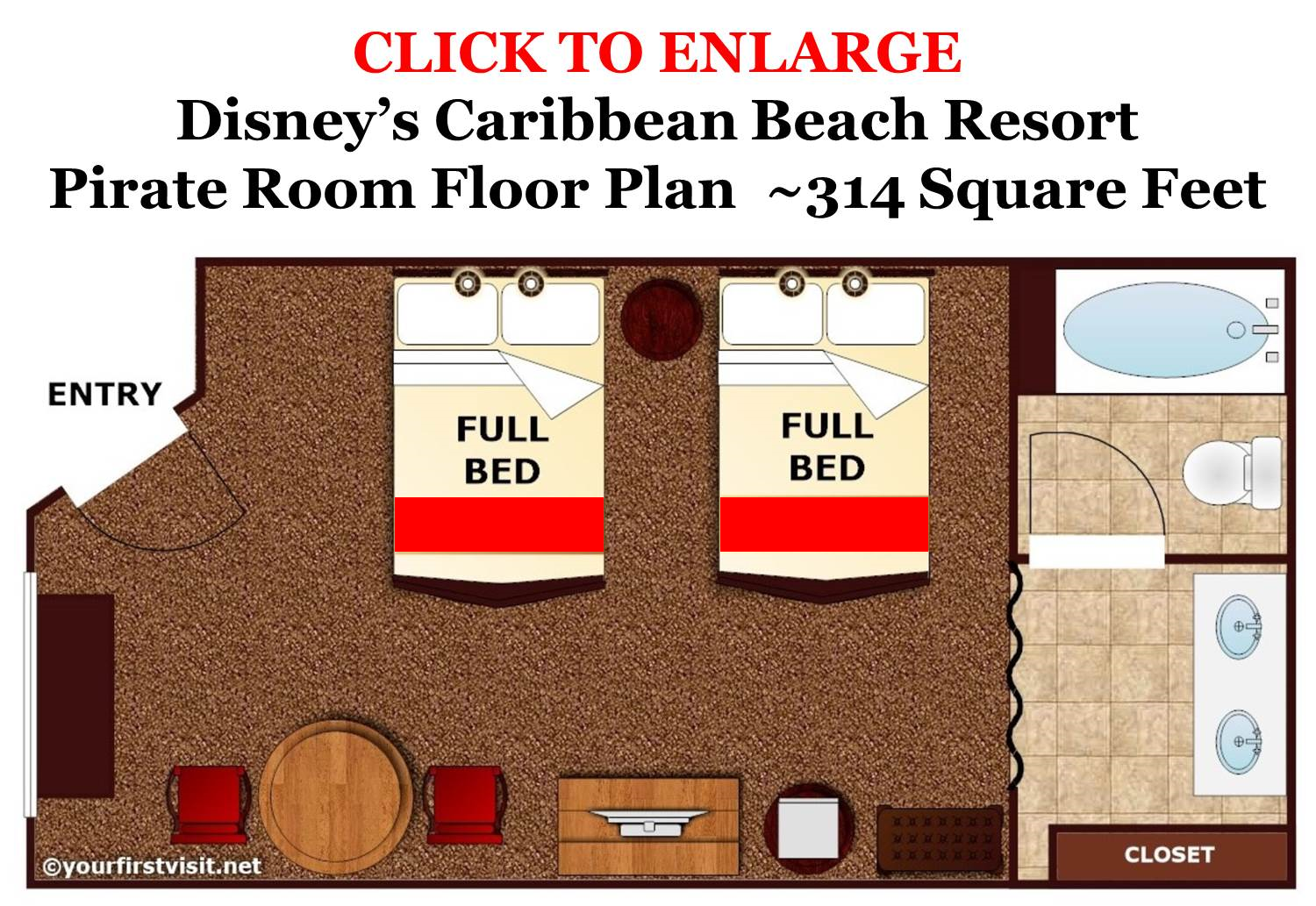 Like Disney’s other moderate resort rooms, these pirate-themed options are spacious and livable. 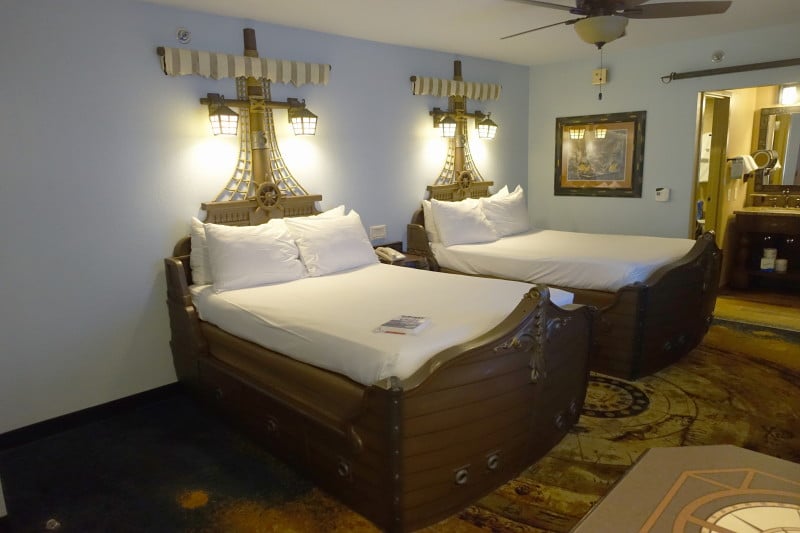 One side of the room has two full beds. Note the ship theming! 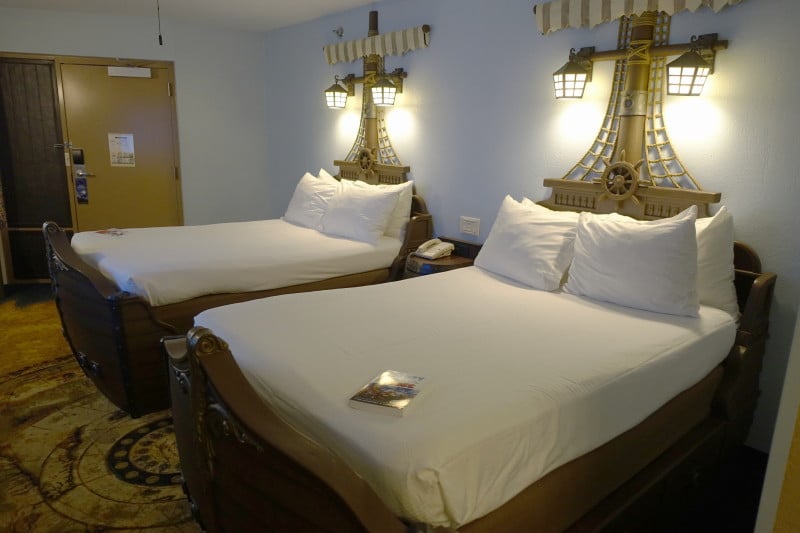 The bed side from the back of the room. 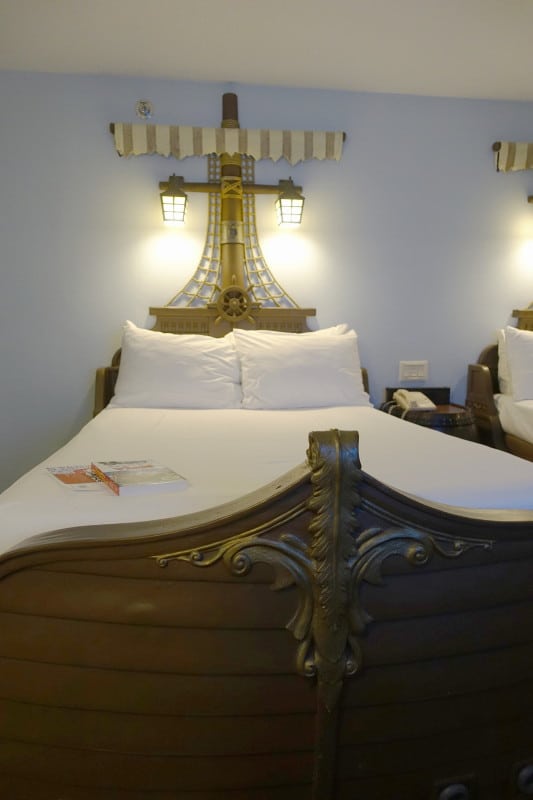 A closer view of the beds. Note the detailed wheel, mizzen mast, yard, shrouds, ratlines, and lanterns aft, and the bow chasers forward. 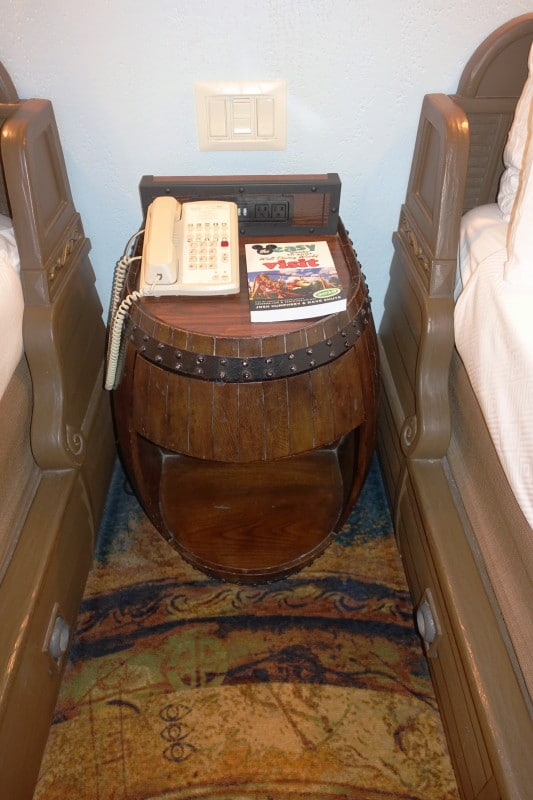 The bedside table takes the form of a barrel, and has a storage shelf underneath… 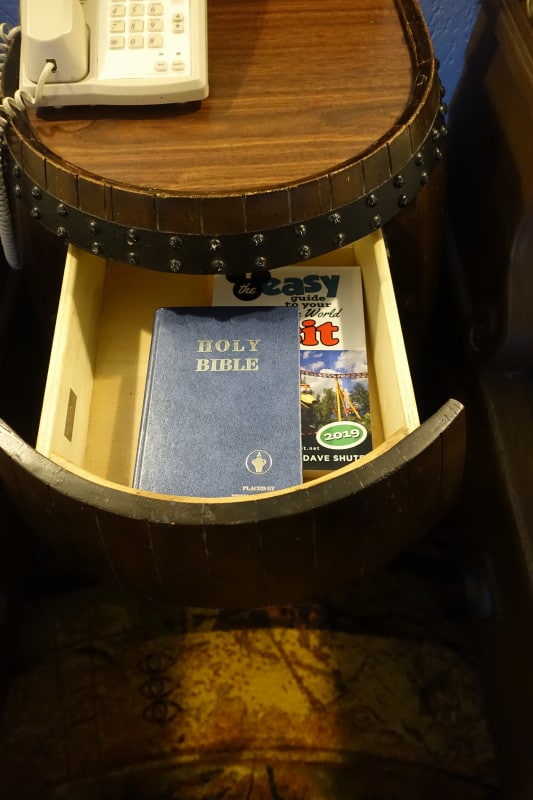 …as well as a drawer that can hold your important books. 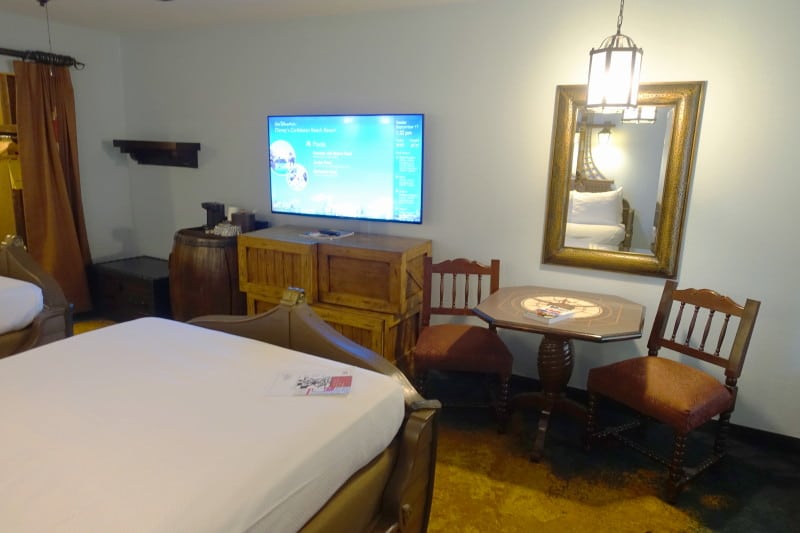 The TV side of the room continues the nautical theming, adding crates to the barrels. 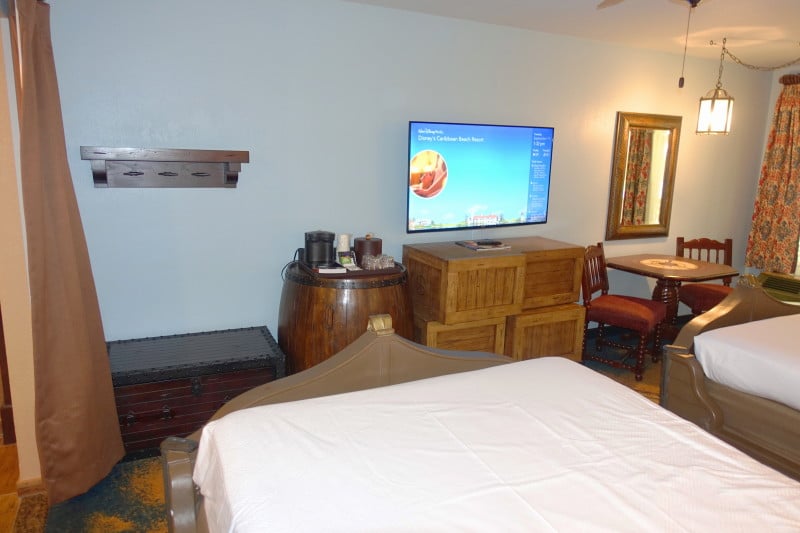 The TV side from the back of the room. 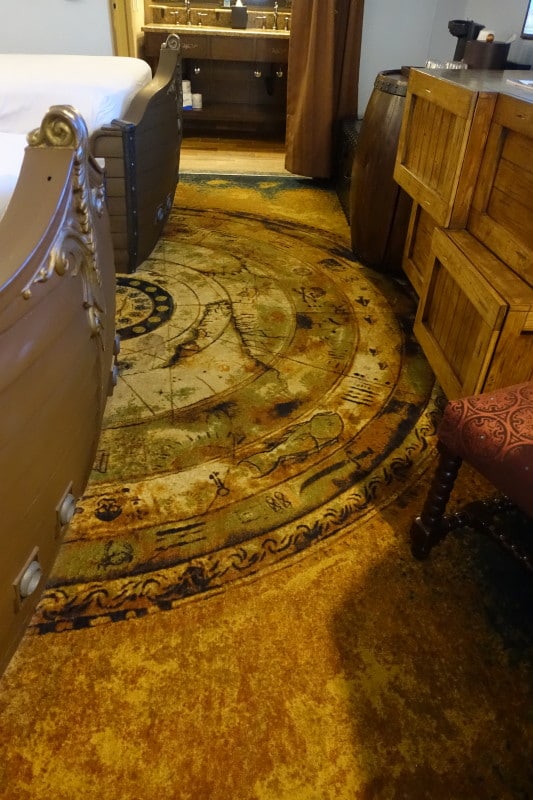 The rug is both nautical and somewhat sea-like. It, combined with the blue (a light sky blue) wall colors, makes the “ships at sea” bed concept work a bit.

I did not spend enough time with this rug–once again, I write a phrase that no one else has ever written before–but suspect that if I had, I’d find lots of references to the movies and a hidden Mickey or two. 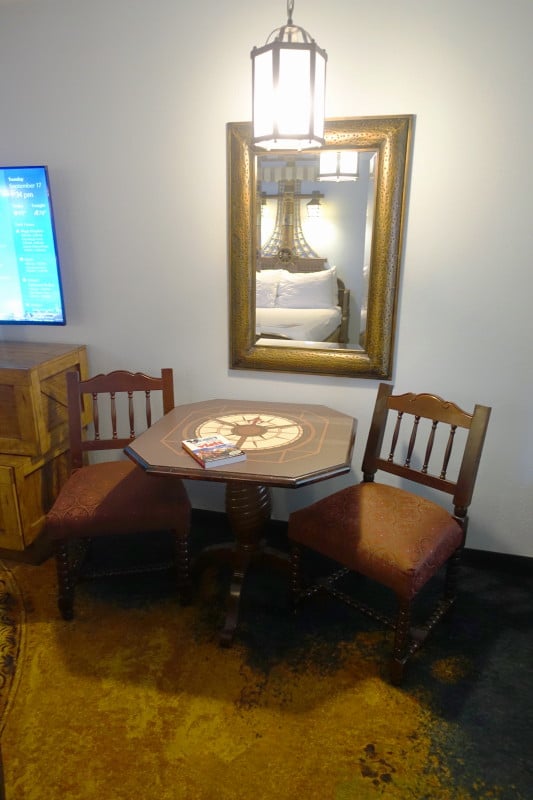 Back to the TV side, a closer view of the table and chairs. A compass rose tops the table. 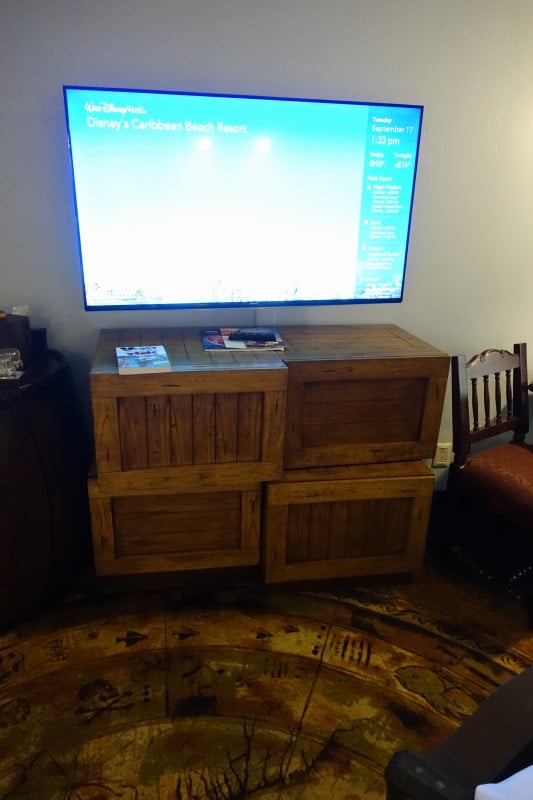 The dresser has a 54 inch TV above, and resembles a pile of crates. 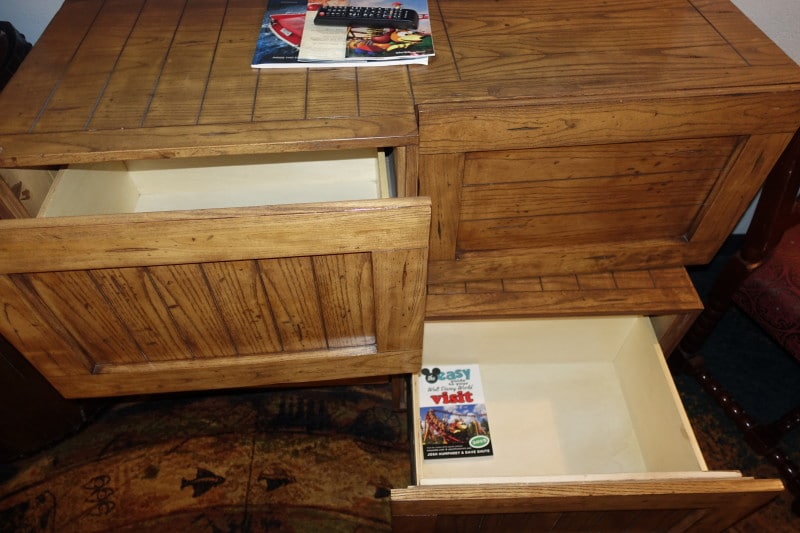 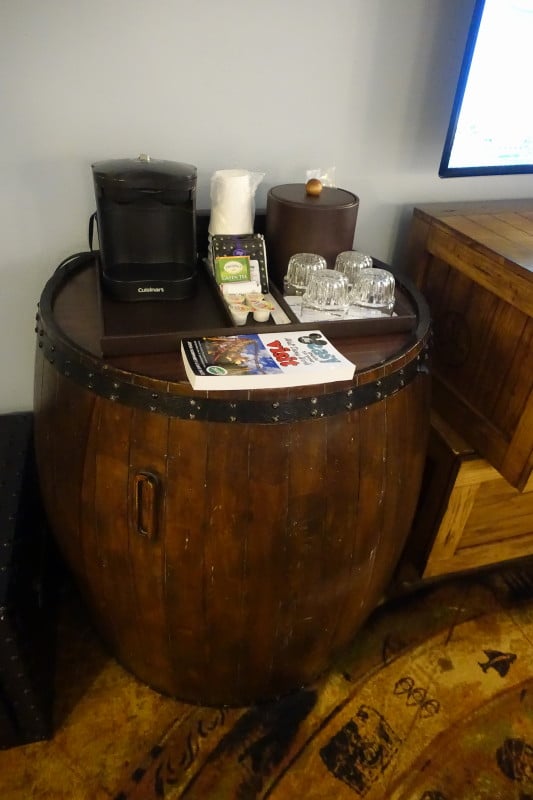 The coffee service is on top of a barrel… 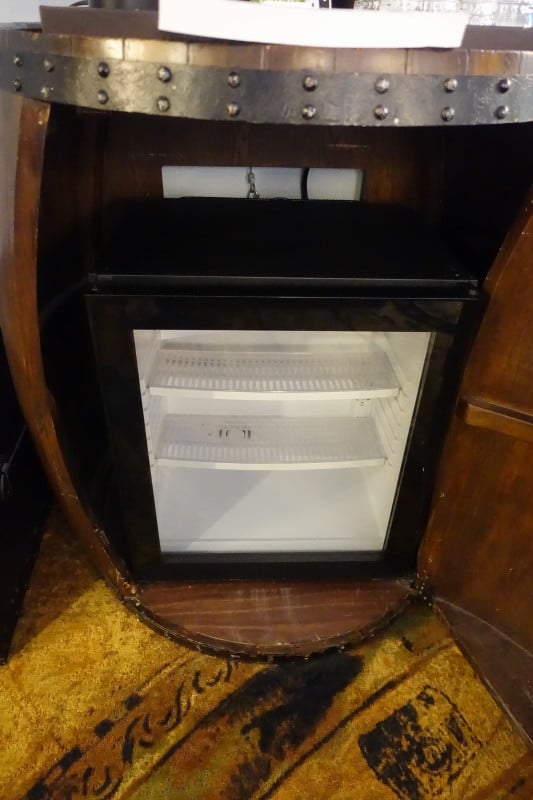 …which encloses the mini-fridge. 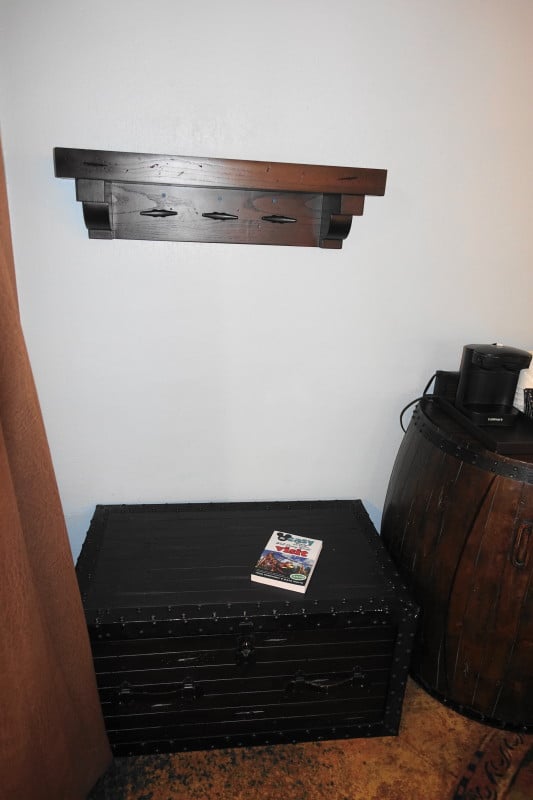 At the end of this side is a treasure chest with hanging hooks above. Note that the hooks are cleats. 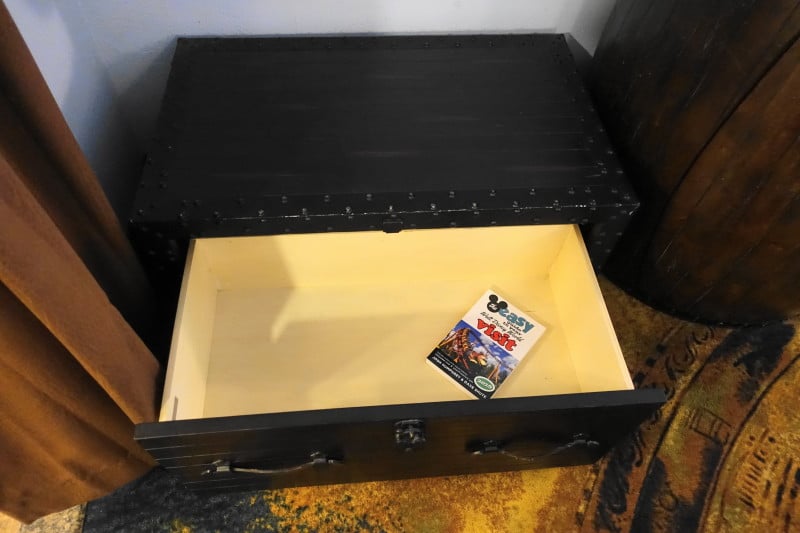 The chest has a large storage drawer. 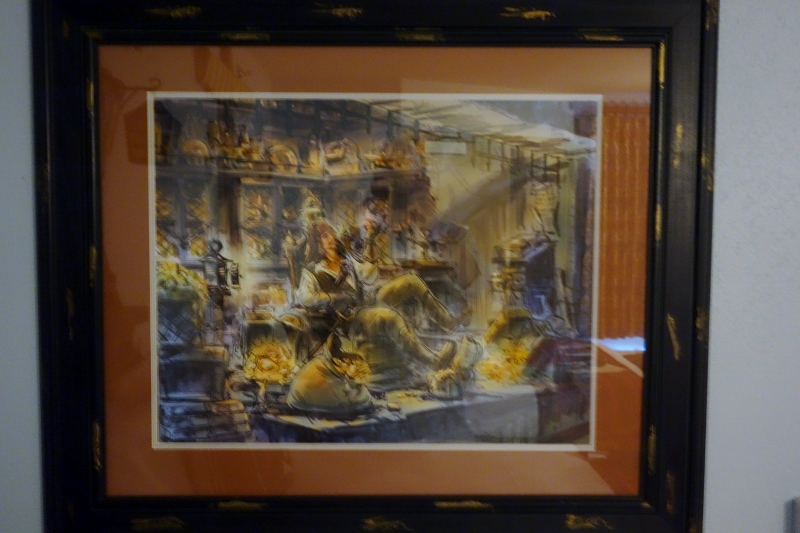 Note that this room is really more nautical than piratical, with a few exceptions. One the art on the wall between the beds and the bath, featuring Captain you know who… 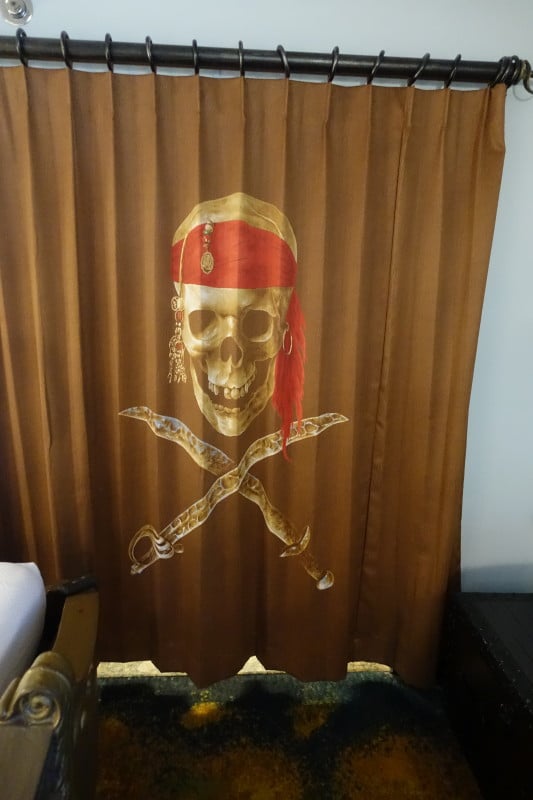 …and another is the curtain separating the bath area from the main bedroom area. Seeing this is a cheery way to start your morning. 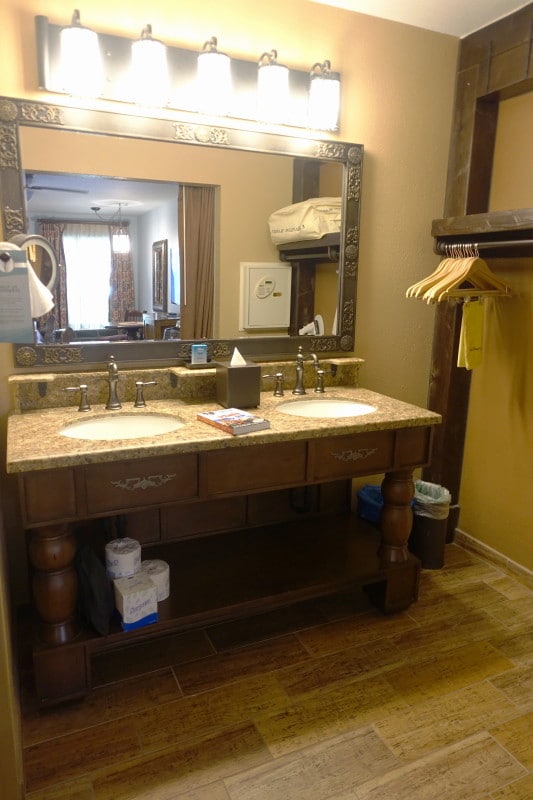 Behind the moveable curtain, the bath has two sinks. 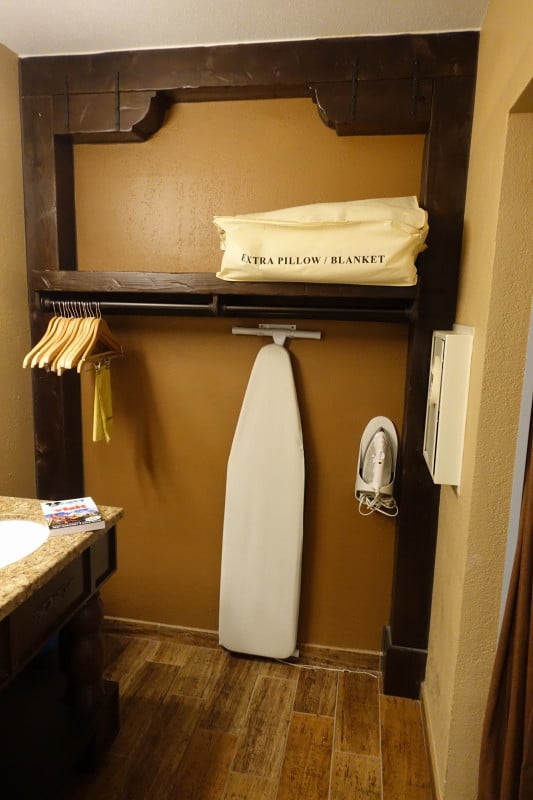 At the side of the bath there’s a closet area. Note the beam above. 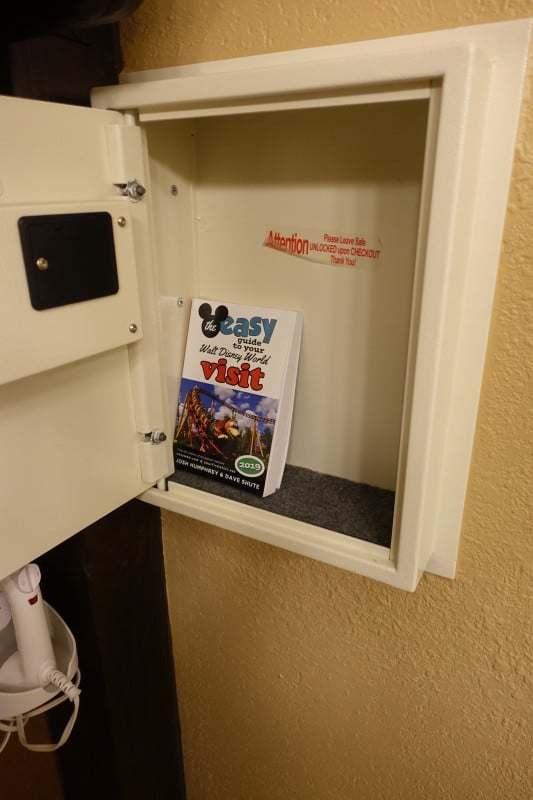 In the closet area you’ll find this safe. It’s quite large–my book is six by nine inches. 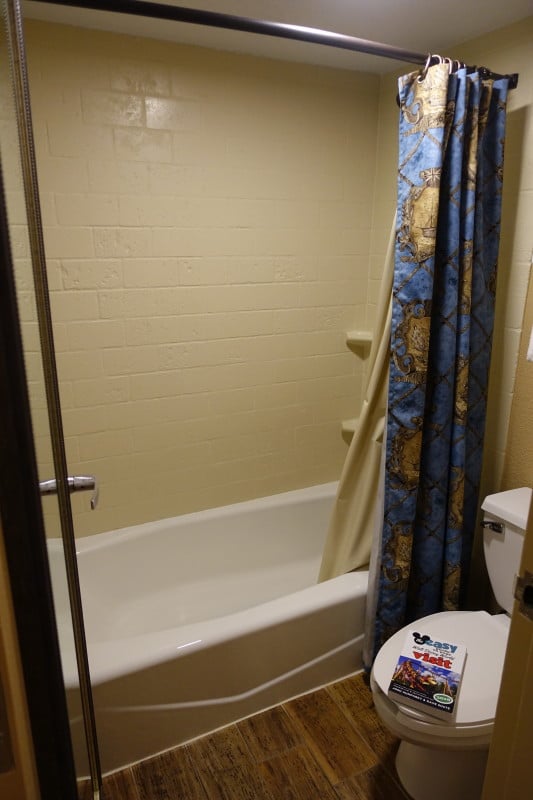 Separated into their own room are the tub/shower combo and the toilet. 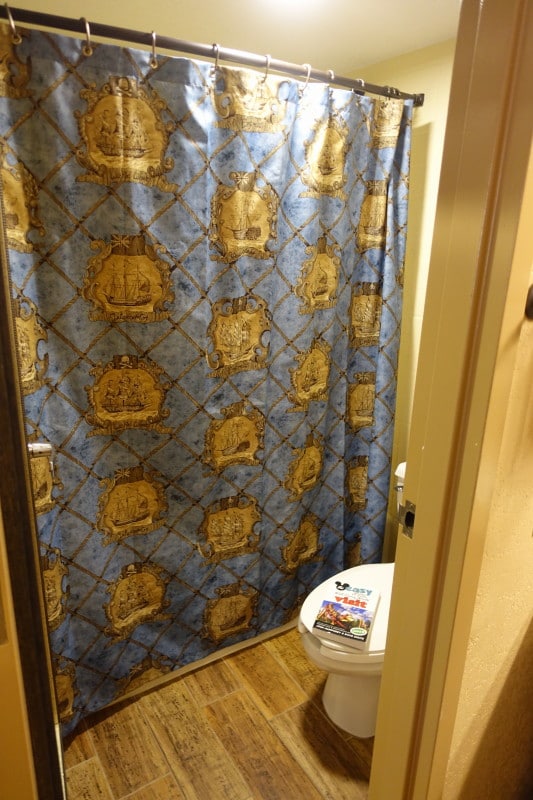 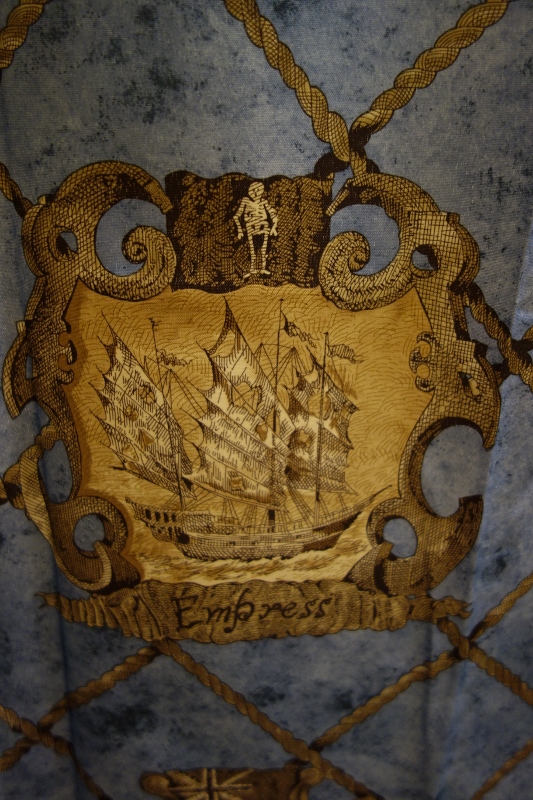 …is covered with ships. 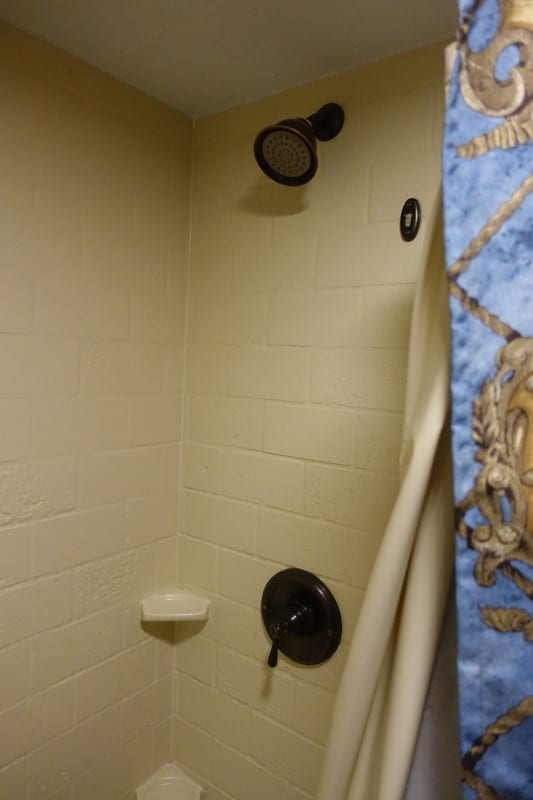 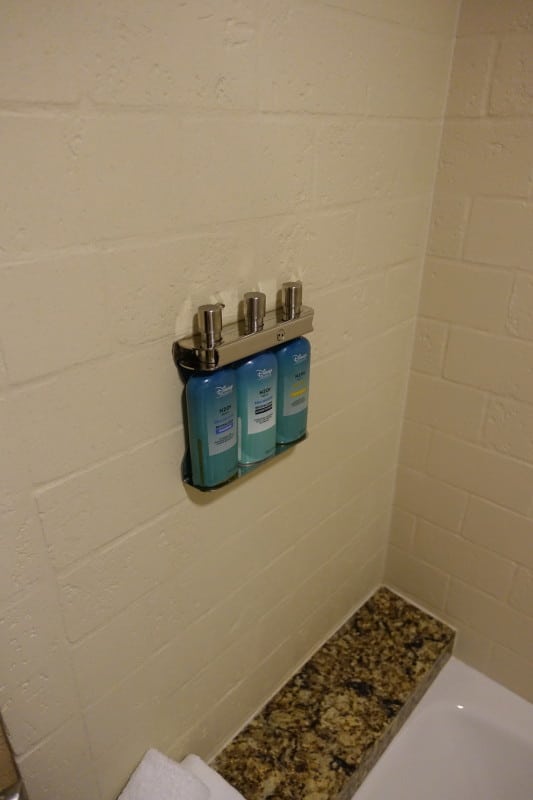 …and have the same in-wall toiletries now common at this and lower price levels.

The extent and depth of the nautical theming is remarkable, and the less pervasive pirate theming is fun too. Back when I was a boy, I would have loved this room.

But Trinidad is still a ways away from the center of the resort and its main pool, shops and dining. The situation has been improved by the opening of the Spyglass Grill within Trinidad, and the opening of the nearby Disney Skyliner station. But unless all your kids are really into pirates, I can’t recommend it.  The value of the theming itself is not enough to offset the relative isolation…add the extra cost, and you are paying to be inconvenienced.

previous post The Holidays at Disney's Animal Kingdom
next post Next Week (November 30 through December 8, 2019) at Walt Disney World