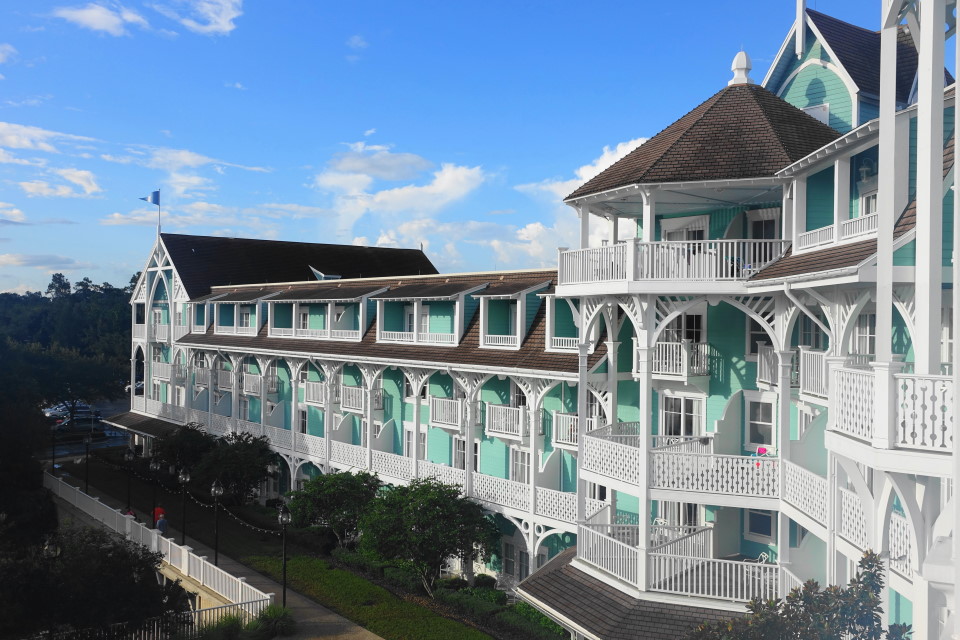 (For the first page of this review of Disney’s Beach Club Villas, see this.) 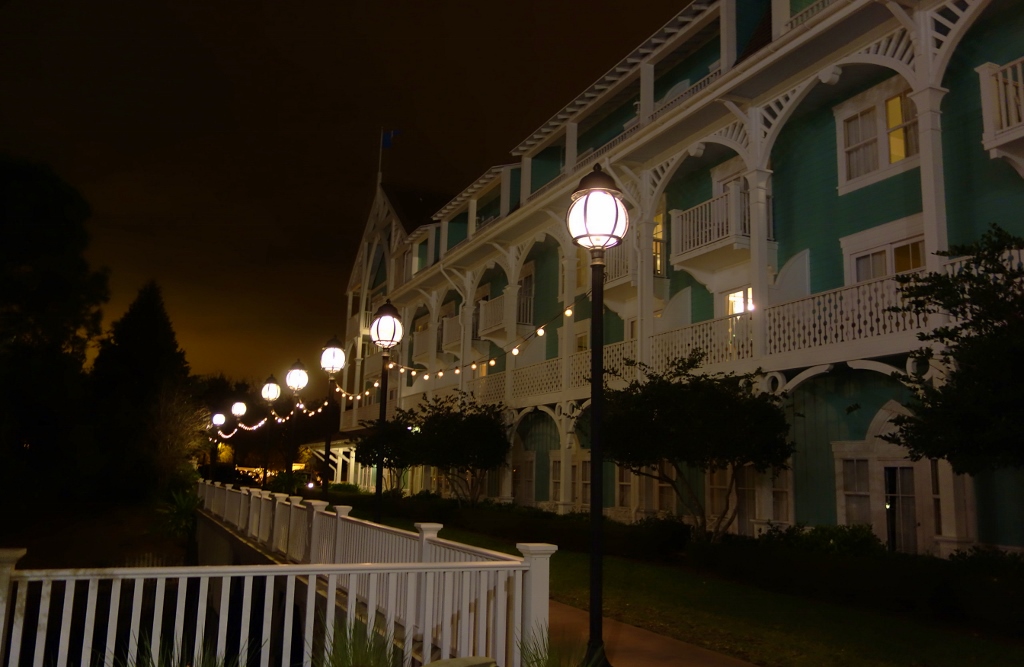 Disney’s Beach Club Villas is one of many Disney Vacation Club options at Walt Disney World. These resorts are available not only to DVC members, but also to everyone else, just like any other Disney World offering, through the regular Walt Disney World website or resort reservations phone number at 407-939-7675. 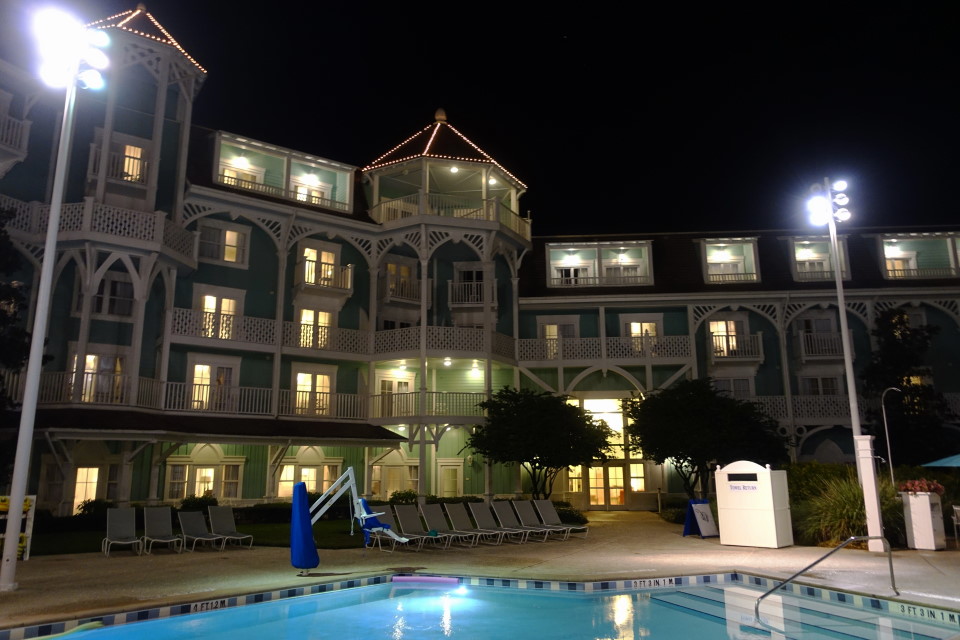 According to Disney’s web page on the Beach Club Villas, they

…The nautical allure of the Eastern Seaboard comes alive with architecture that features intricate wooden accents and a soft pastel color palette. Retreat to one of our stately Studios with kitchenettes or one of our spacious Villas complete with a kitchen, living area and a host of home-style amenities. Enjoy charming views from your windows and private porch or balcony.” 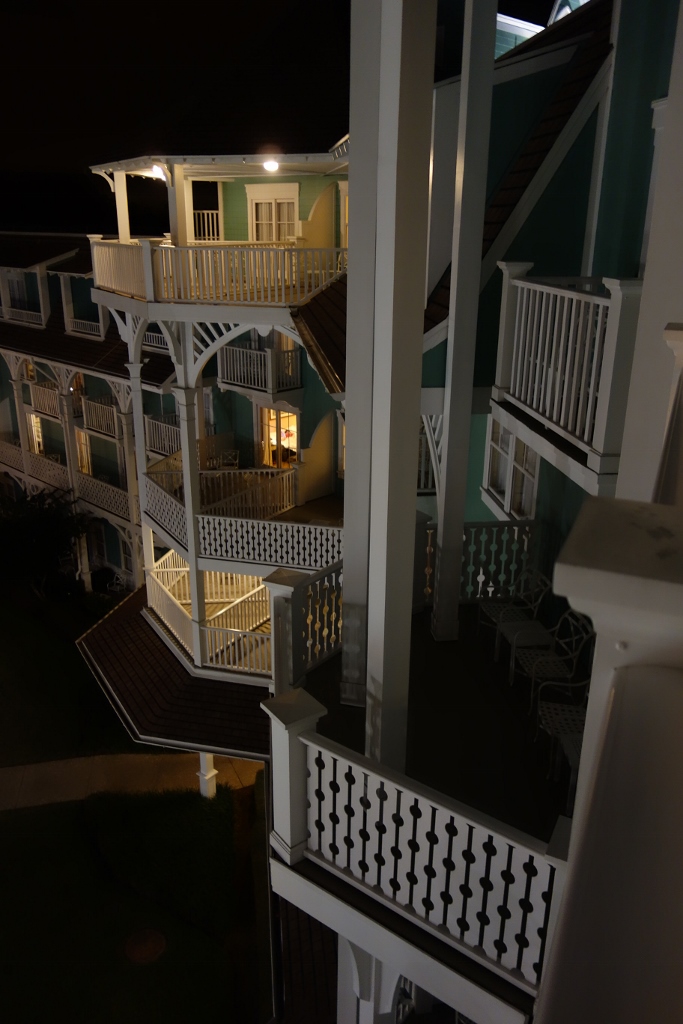 The Beach Club Villas are in fact as lovely as any other resort at Walt Disney World, and are at least comparable in beauty to the Grand Floridian…and perhaps, because of their smaller scale, even more charming.

The smaller scale, angled facade, and more playful detailing of the Beach Club Villas help it better reflect its roots in domestic architecture. 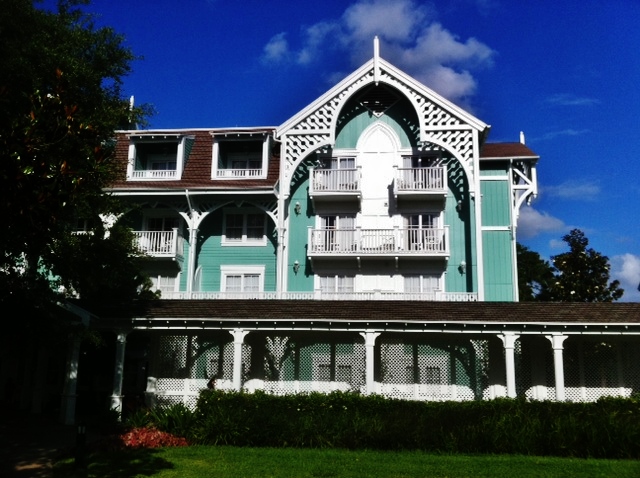 For example, some of the facades include not only the clapboard siding common at the resort but also towers designed with board and batten siding.  A small thing, but one that hints at having a domestic history rather than being a monolith.

The Villas are a lovely sea green, a warmer and more inviting color than the (still-nice) cooler blue of the Beach Club. 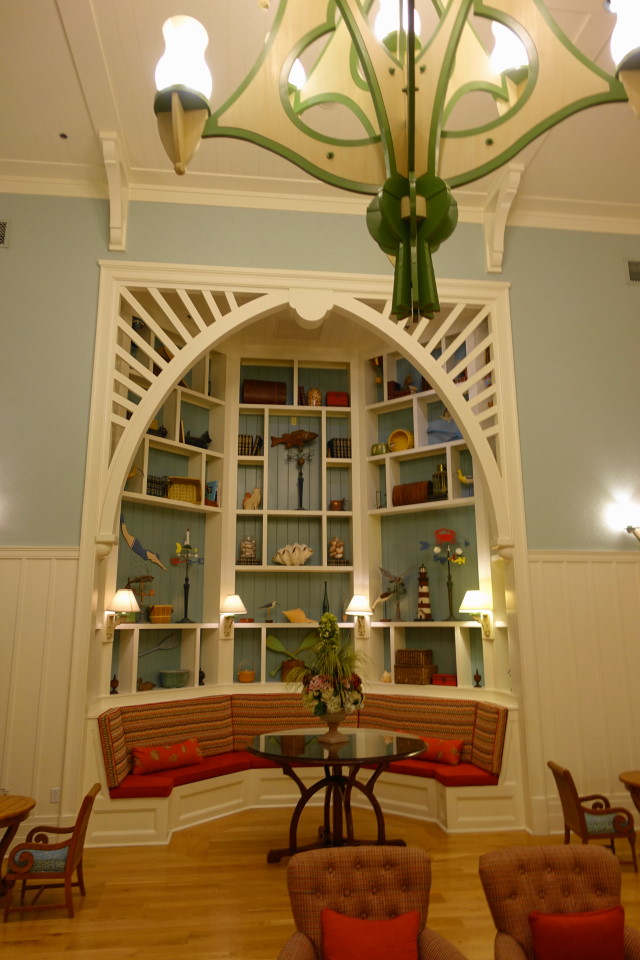 Interiors spaces are just as nice, especially the main entry lobby through which guests will walk many times as they access the Beach Club, Epcot, Crescent Lake, and the BoardWalk. 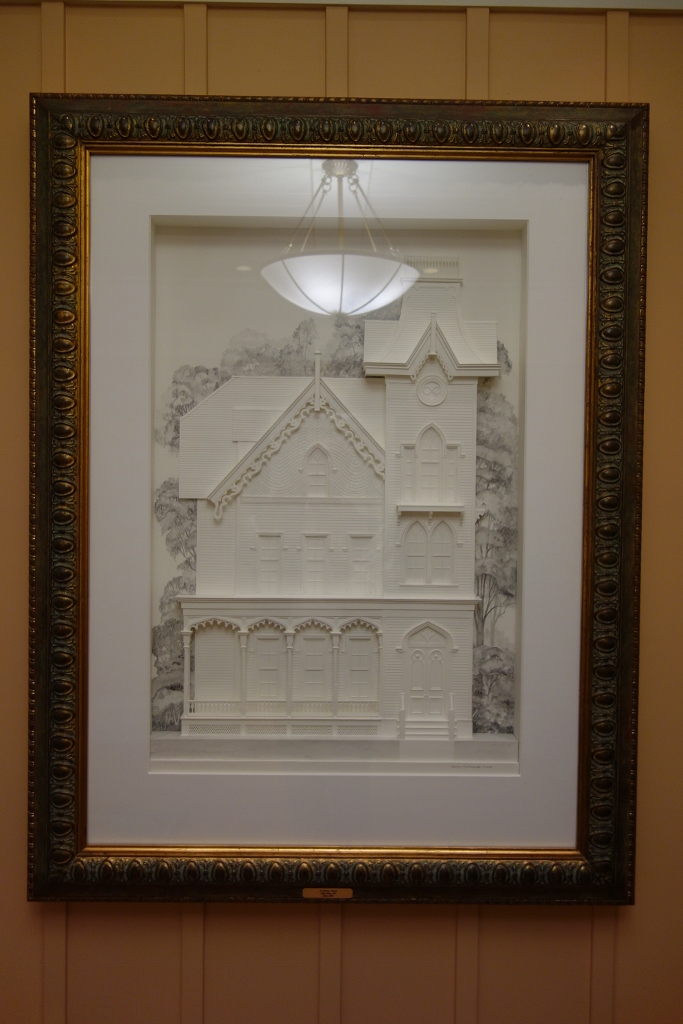 Disney’s Beach Club Villas does not have Grand Villas. The other three room types are covered on this page. 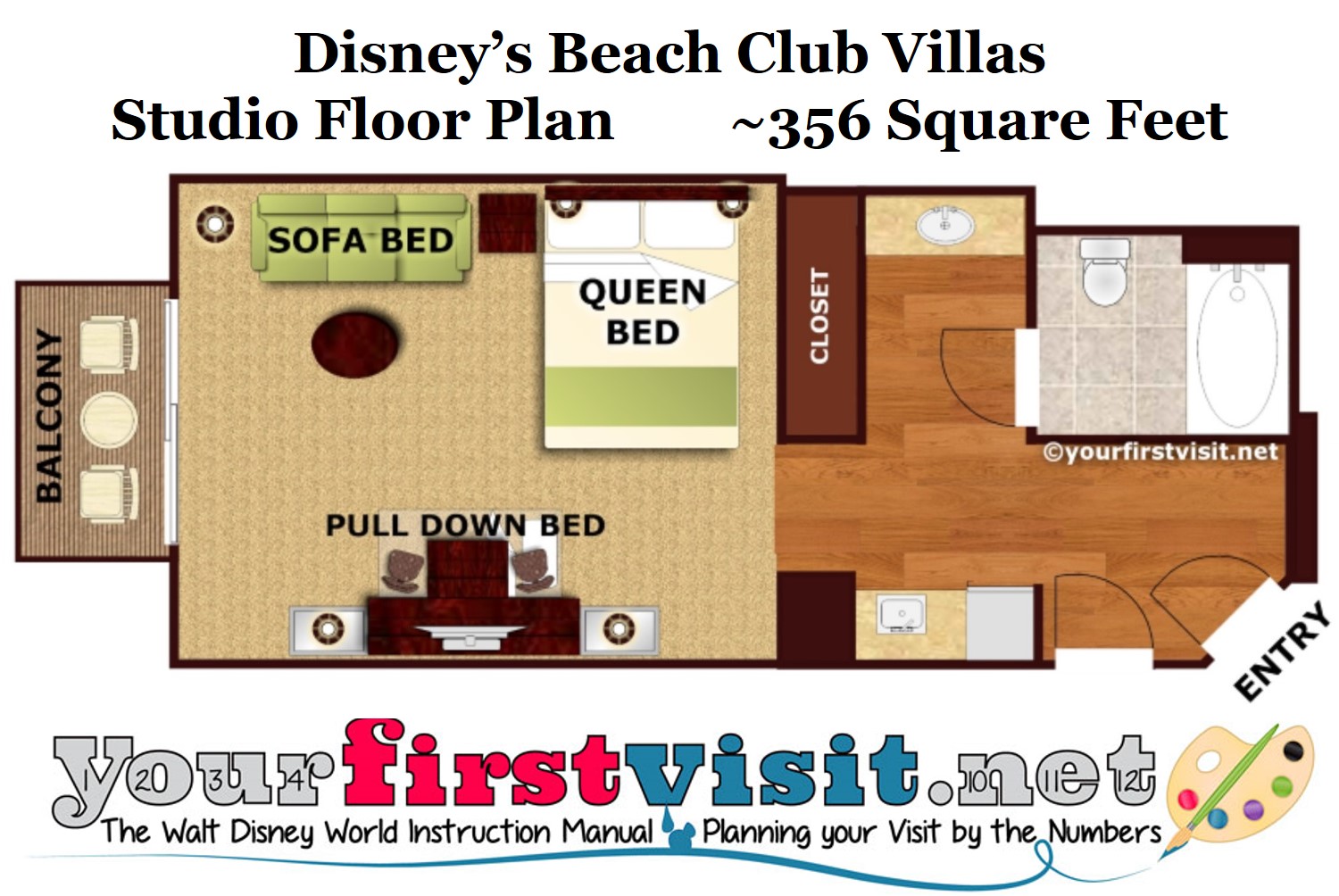 At Disney’s Beach Club Villas, Studios sleep five and have a microwave and mini fridge. 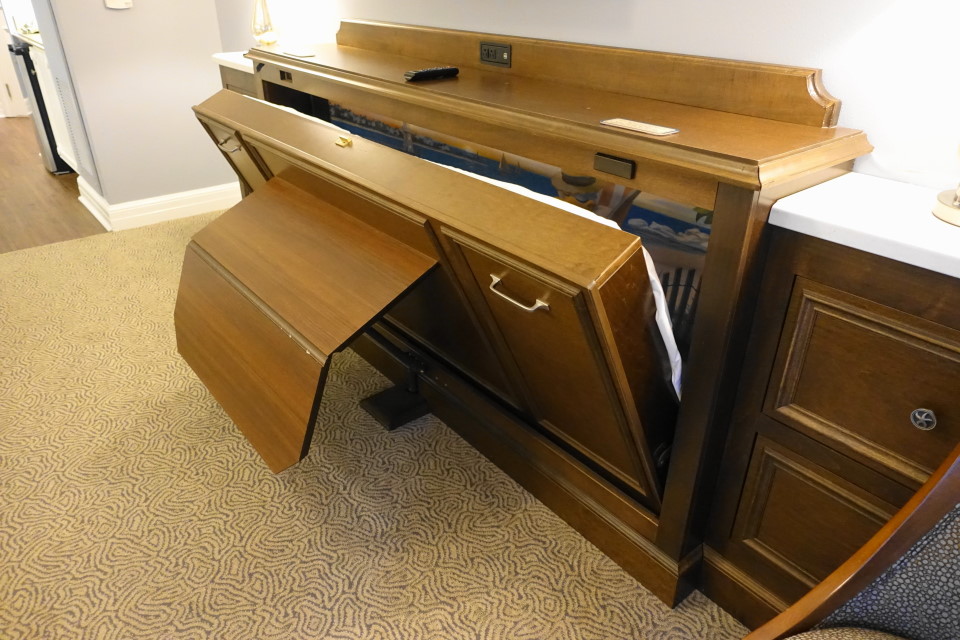 The microwave is one of several ways Studios are different from regular rooms at the Beach Club. 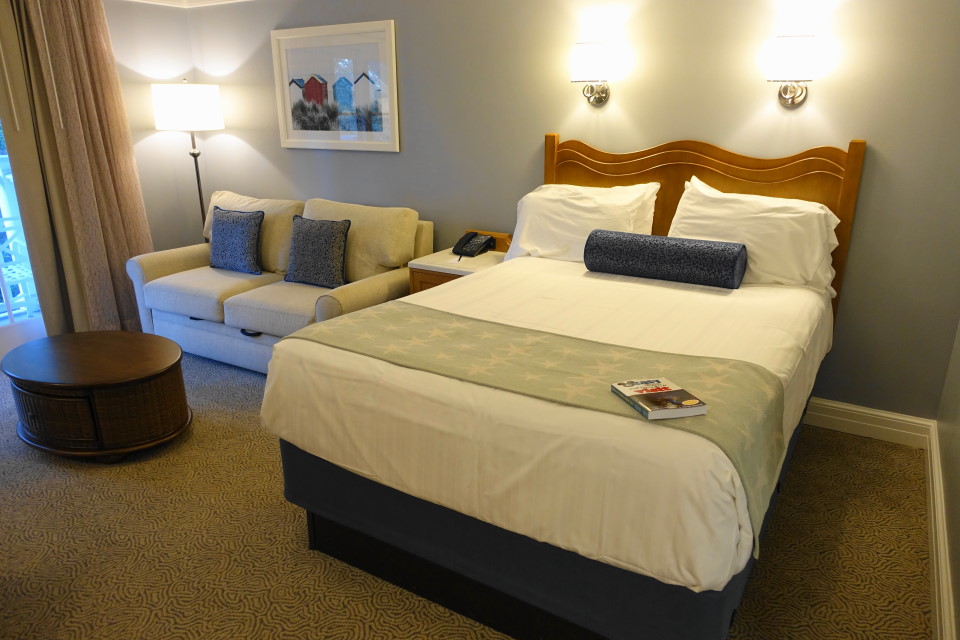 These studios go for about the same price as regular standard view Beach Club rooms.  I don’t see how the microwave makes up for the smaller living space, smaller second bed and loss of the table when the third bed is in use, so I can’t recommend these rooms over the Beach Club itself for first time family visitors. 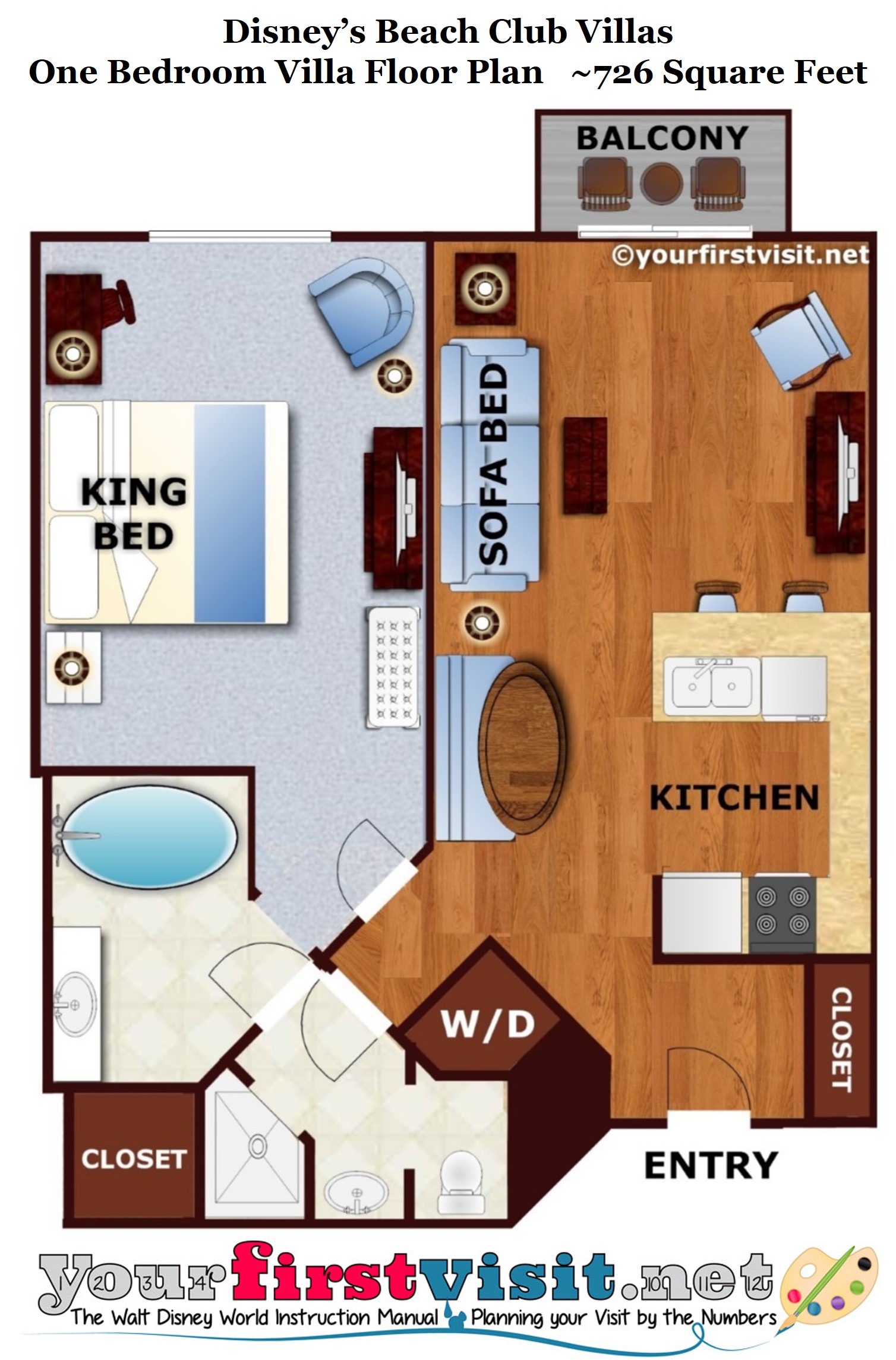 One-Bedroom Villas at the Beach Club have a master bedroom with a king bed. 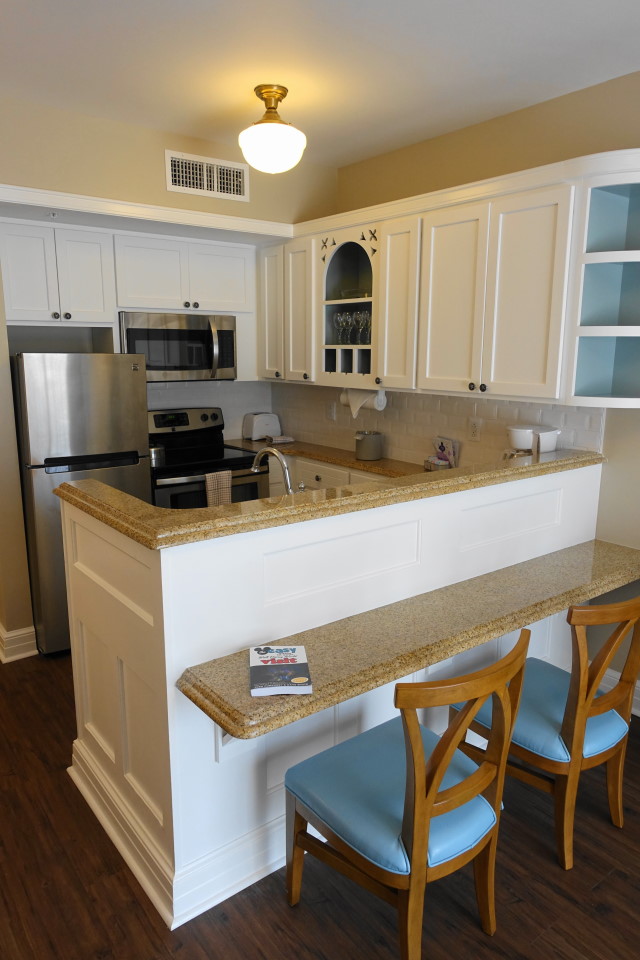 They have as well a full kitchen/dining/ living space, a washer/dryer, and sleep 4 in about twice the space of a studio.

The two additional sleeping spots are on a good-sized but thin fold-out couch in the living room space. 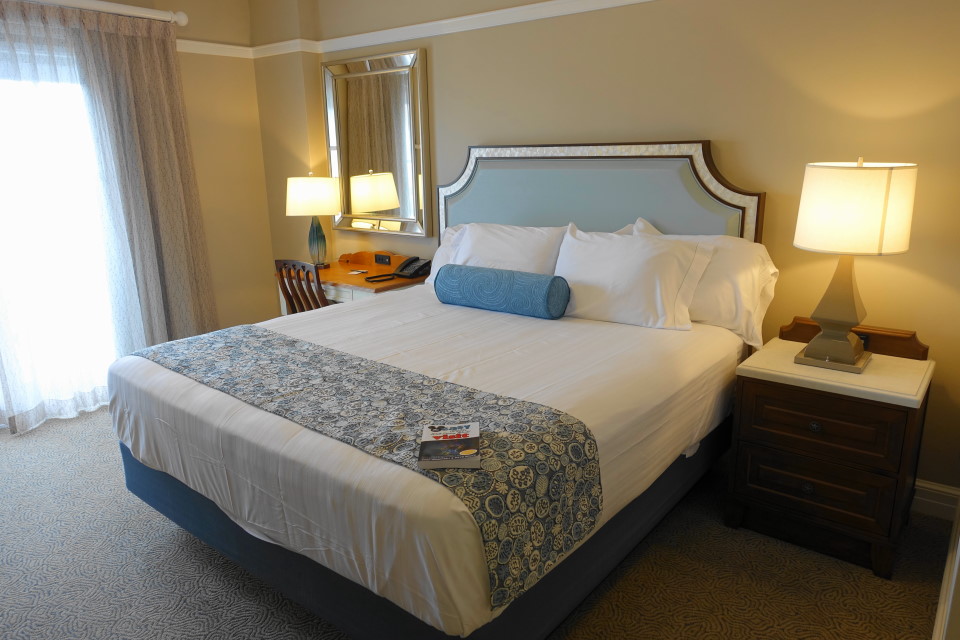 The bath is shared, with access to it from both spaces. The kids on the sofa bed don’t need to enter the master bedroom to get to this bath.

Depending on the price season, these villas are only around 40-50% more expensive than a standard Beach Club room, for twice the space.

The additional space, full kitchen, and living and dining furniture are hard to beat, even though if you are following one of this site’s itineraries you won’t be in your room much to enjoy them!

They aren’t for everyone…but the value is there if you can afford it and your family fits.

A photo tour of a One Bedroom Villa begins here.

Two-Bedroom Villas add a second bedroom to the amenities of a One-Bedroom, and sleep 8 or 9. 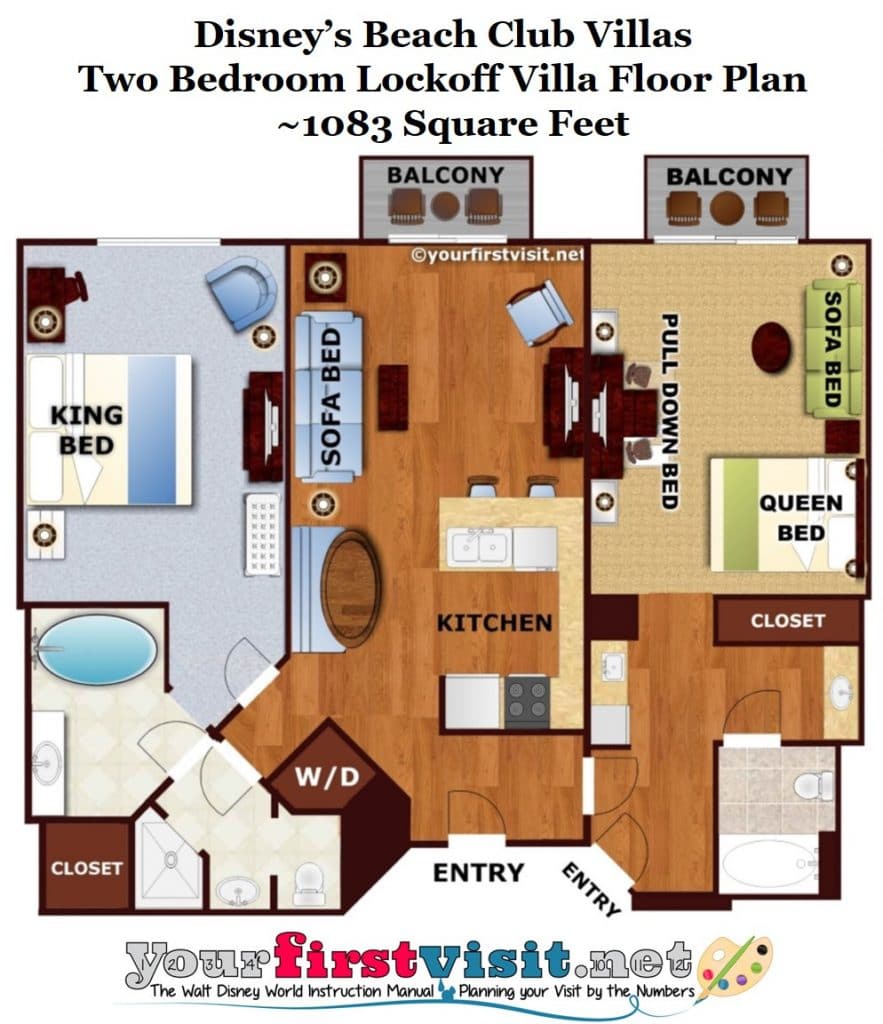 Some second bedrooms are simply connecting Studios. These Villas thus sleep 9, and are depicted in the floor plan above.

Others were designed from the start to be part of a dedicated Two Bedroom Villa, and these–typically–have two queens in their second bedroom, sleep eight, and replace the Studio’s kitchenette with a closet. See the floor plan below. 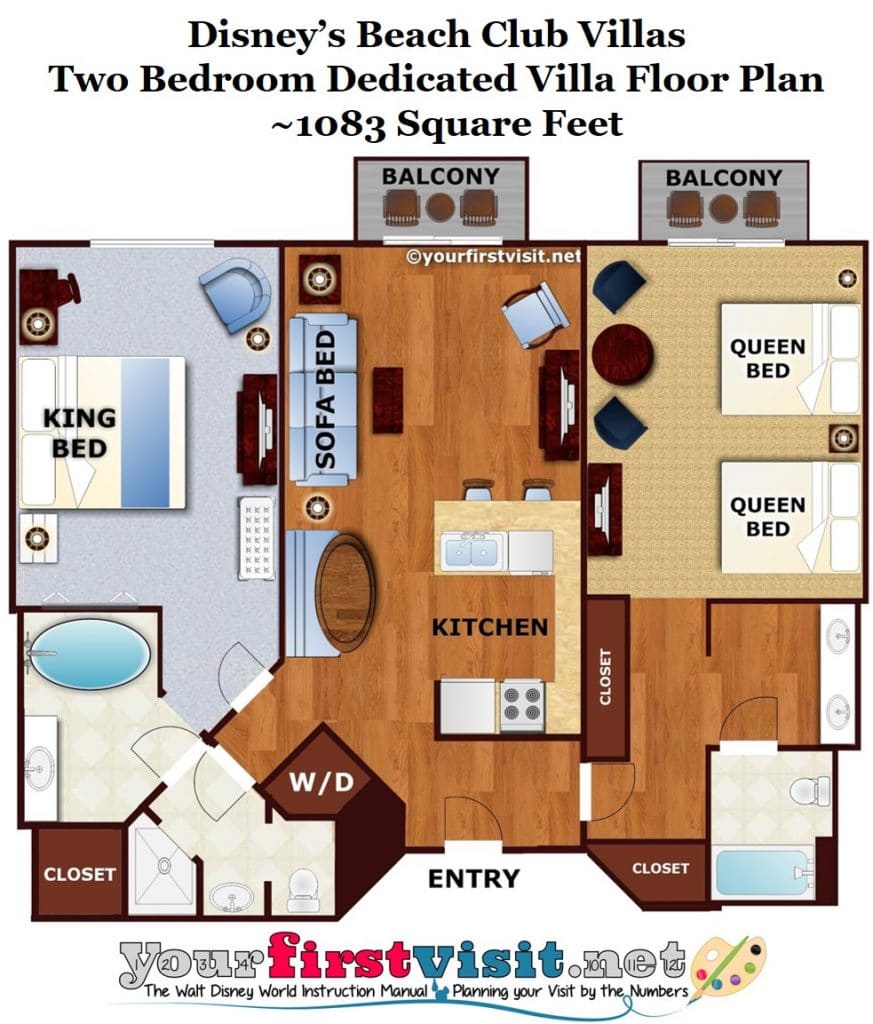 Like many DVC Two-Bedroom Villas, in Disney’s Beach Club Villas Two-Bedrooms there isn’t enough seating space in either the living room or in the dining spaces for all the people these rooms will fit.

The living room chairs will seat three to four people, with two more chairs available at the kitchen’s breakfast bar. 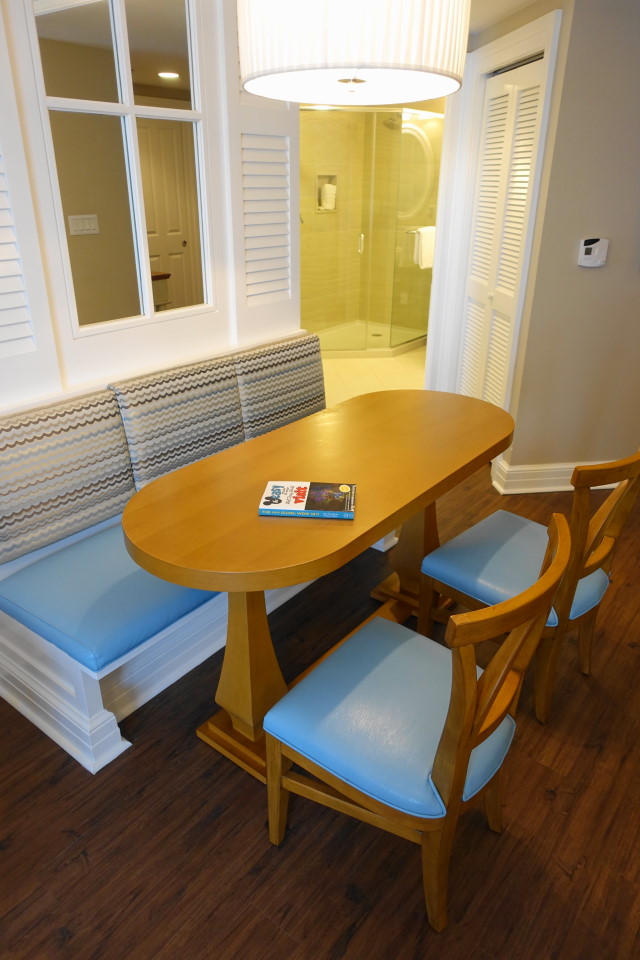 The dining table will seat five comfortably and at most six.

So if you are filling a two bedroom with 8 or 9 people, things can get awkward, especially compared to the ease with which One-Bedroom Villas fit the people they can sleep.

These space issues are part of the reason why these rooms are only about 50-80% more expensive than One Bedroom Villas, even though they have double the sleeping capacity.

On the other hand, depending on the price season, a Two-Bedroom is only 10-20% more than two standard Beach Club Resort rooms, but provides 50% more space, and, compared to those rooms, all that extra kitchen/dining/living space and furniture.

If your family’s sleeping needs will fit in the bedrooms–that is, if you don’t need to use the fold-out bed in the living space–Two-Bedrooms are a particularly comfortable option.

The Beach Club Villas have many strengths for first time visitors, bringing together the positives of the DVC resorts–extra, more livable space, full kitchens–with those of the Beach Club: access to Stormalong Bay, Epcot and Disney’s Hollywood Studios.

The weaknesses of the Beach Club Villas are also shared–many families won’t be in these rooms enough to enjoy their amenities, and the architecture, lovely to adults, is dull to kids.

PHOTO TOUR OF A STUDIO AT DISNEY’S BEACH CLUB VILLAS

The long-time travel agent partner of this site, Kelly, can book you at the Beach Club Villas or anywhere else at Disney World.  Contact her using the form below!