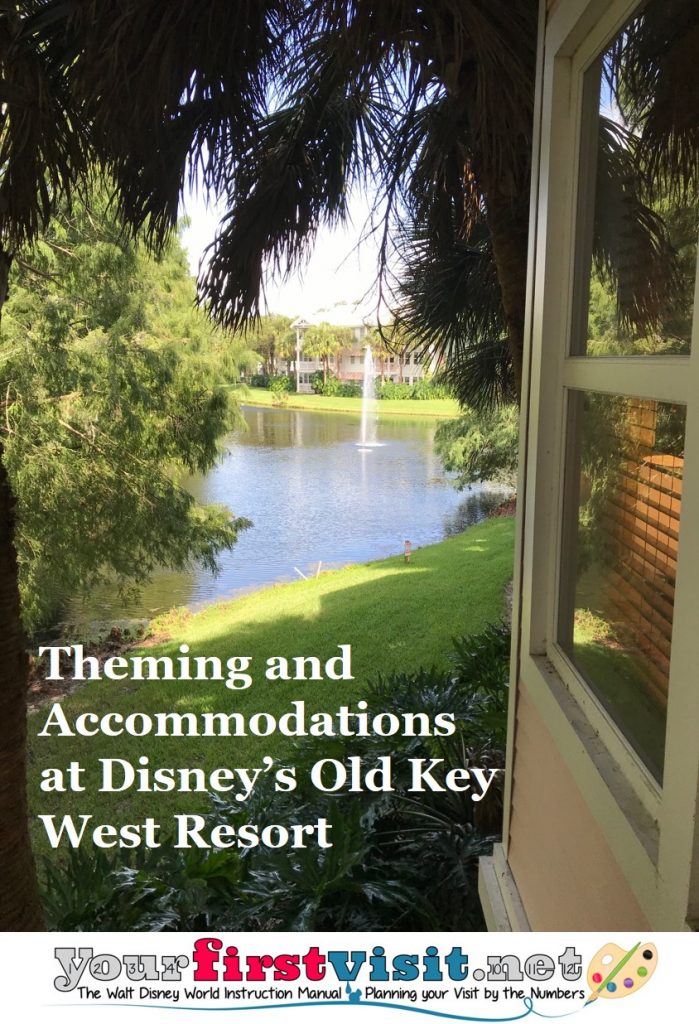 (For the first page of this review of Disney’s Old Key West Resort, see this.)

Disney’s Old Key West Resort is one of many Disney Vacation Club options at Walt Disney World. These resorts are available not only to DVC members, but also to everyone else, just like any other Disney World offering, through the regular Walt Disney World website or resort reservations phone number at 407-939-7675.

The DVC resorts like Old Key West also are sometimes available to the general public at a discount through renting points from a Disney Vacation Club member or point broker. Check, however, the cancellation terms of such a rental very carefully.

The next DVC offering to open perhaps will be Reflections, located on grounds that were formerly part of Fort Wilderness, although COVID-19 has created uncertainty about this.

Disney’s Old Key West Resort comes in near the bottom based on my criteria of kid appeal and transportation convenience.  That said, its One and Two Bedroom Villas in buildings numbered 30 and higher have a lot going for them, and the theming can be quite appealing to adults.

At Disney’s Old Key West Resort, according to Disney’s website, you will

“experience the romance of the Florida Keys at this tranquil community of Conch Flats—a sprawling island hamlet with shimmering waterways, swaying palm trees and manicured golf-course fairways. Delight in sun-soaked pools, casual dining and such amenities as fully equipped kitchens or kitchenettes. A peaceful tropical paradise, Disney’s Old Key West Resort is also just a boat ride away from the excitement of Disney Springs.”

This is mostly true–Disney’s Old Key West Resort is tranquil, sprawling, and does feature absolutely lovely landscaping and views. 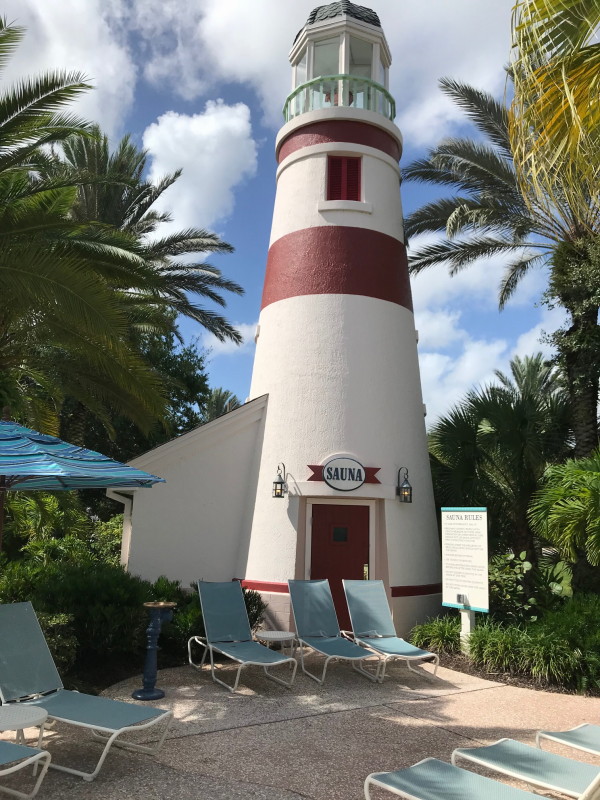 But other than some names, some menu items, and the pool lighthouse, it has absolutely nothing to do with, nor is it at all reminiscent of, Key West, young or old. The original name of this property was “The Disney Vacation Club Resort,” a name which went away after there was more than one of these.  The changes that map to the Old Key West name are slender.

All Disney Vacation Club resorts except the Polynesian Villas and Bungalows have studio rooms, One Bedroom Villas, and Two Bedroom Villas. 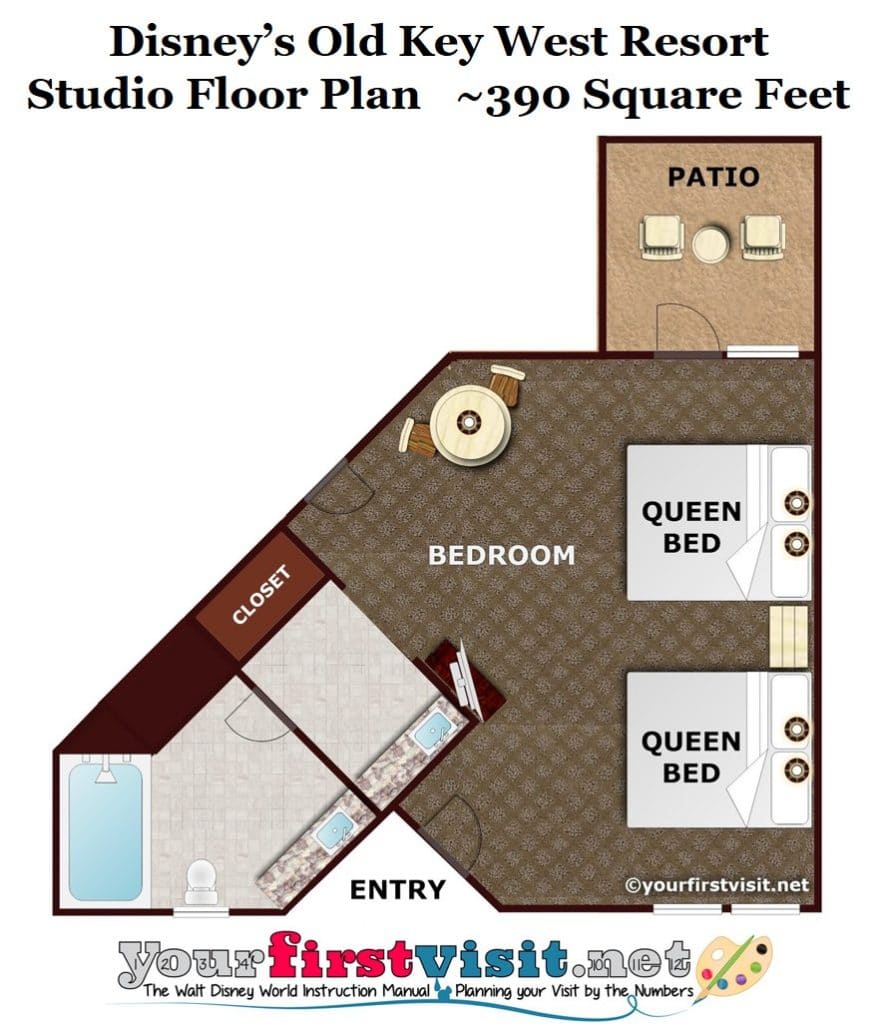 At Old Key West, Studios sleep 4 and include a kitchenette with a microwave and a mini-fridge. Most DVC Studios come with a queen and a fold-out sofa or a fold-down bed behind the sofa; at Old Key West, all have two queens. Most will find two queens more comfortable to sleep on; many will miss the living flexibility created by the couch that you will find in other studios in place of the second queen. 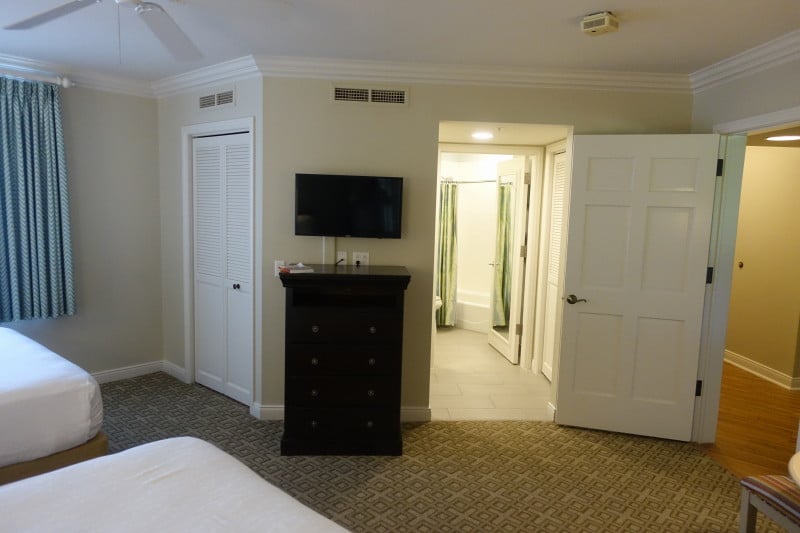 They are the third largest Studios at Disney World, with only those at Riviera and the Polynesian larger. However, there is–other than the two queens–nothing special about these studios. In particular the extra interior space compared to many other DVC studios does not translate into any extra livability.

See this page of this review for multiple photos of a Studio/second bedroom of a Two-Bedroom Villa. 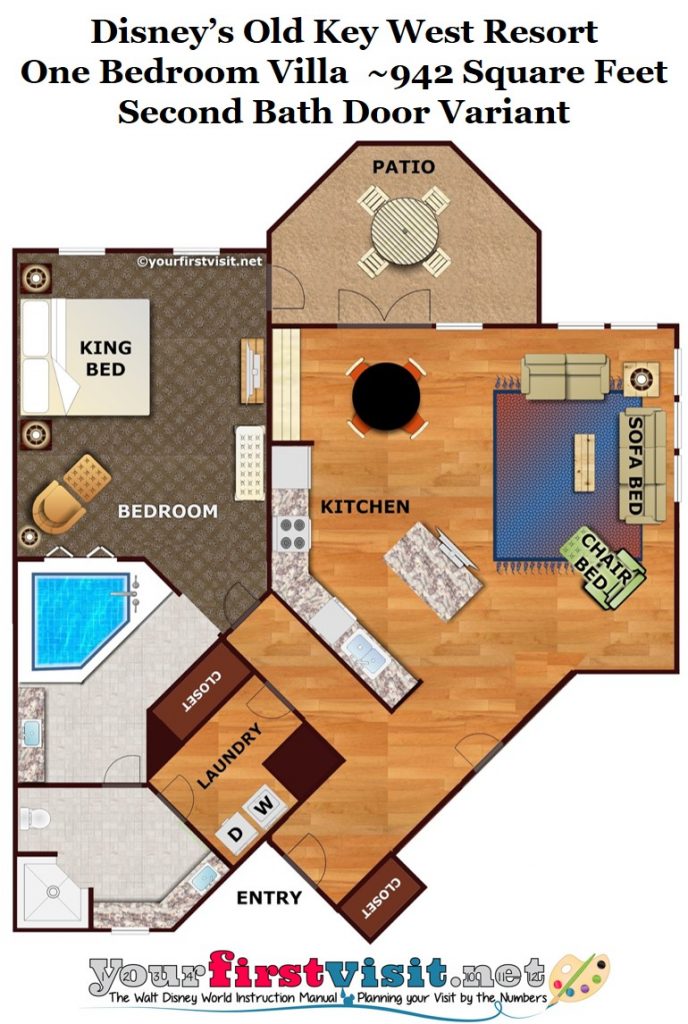 Old Key West One-Bedroom Villas come in two types. The more common type, shown above, includes a doorway from the laundry room into the full bath. This type is found in all buildings numbered greater than 29. 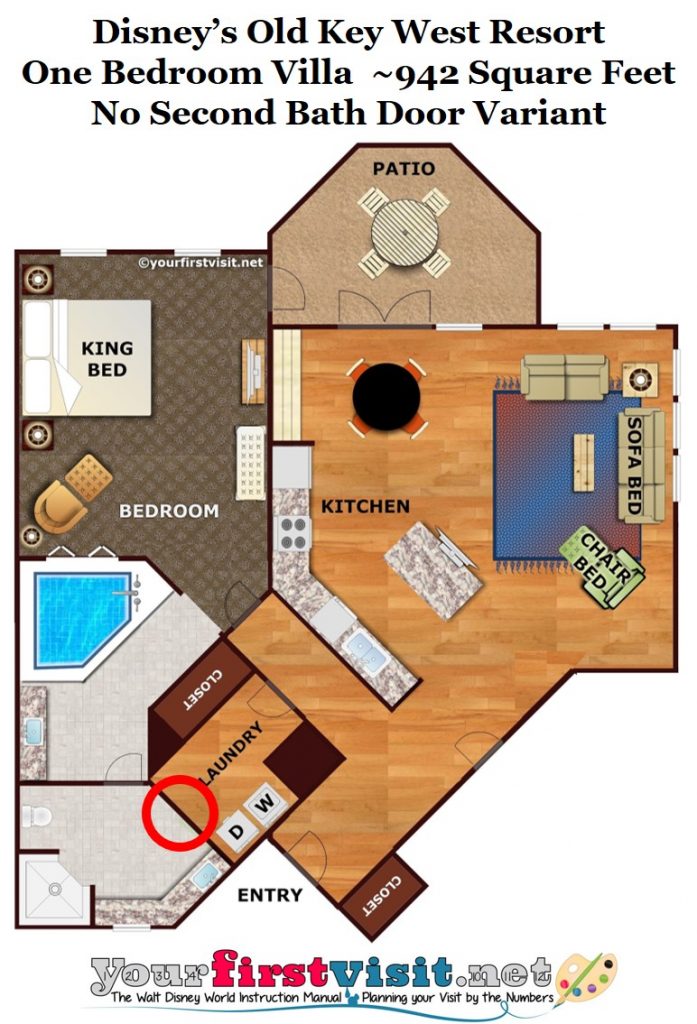 The second type, in buildings 11-29, has no such door. Its absent presence is marked by the red circle.

Your family likely is quite different than mine; in mine, this would be a problem. One Bedroom Villas in buildings 30 and higher don’t have this problem, as the door through the laundry room avoids the master bedroom and soaker tub areas. 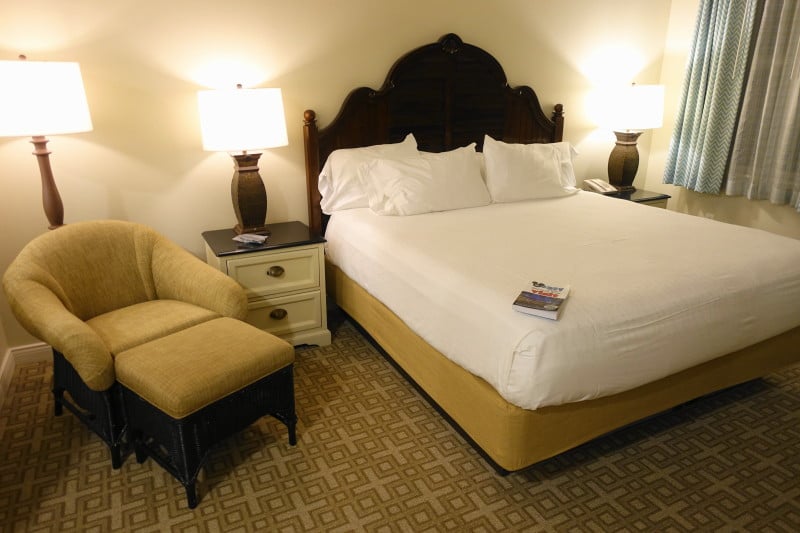 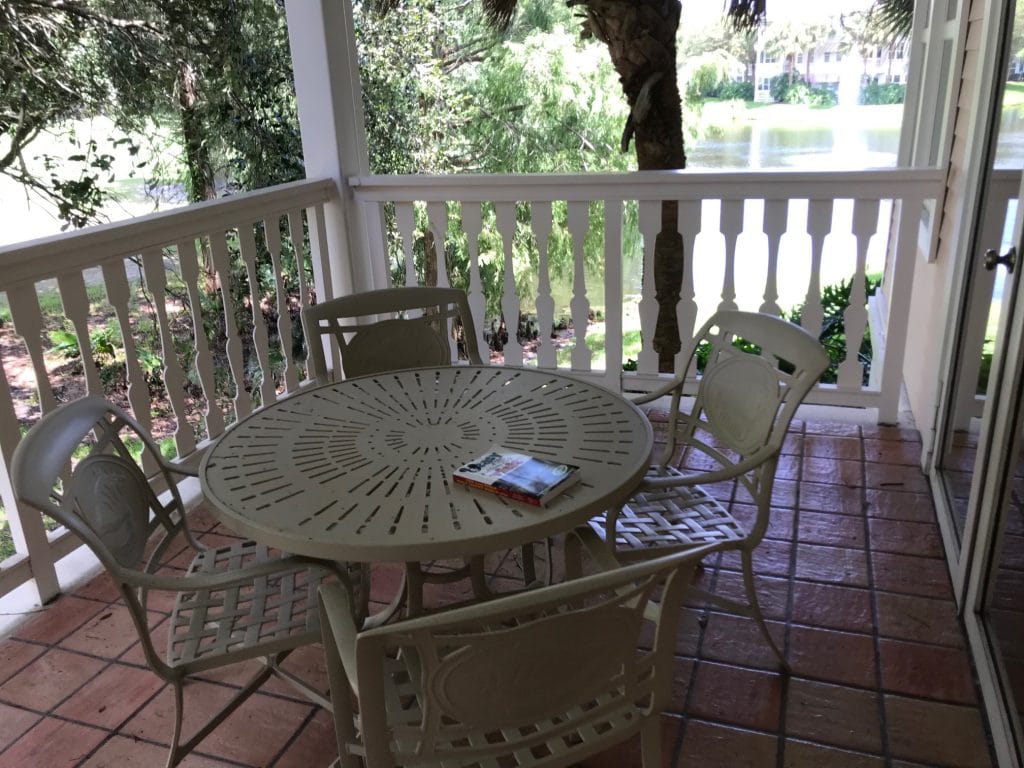 They also have large porch or balcony, and a separate master bedroom. 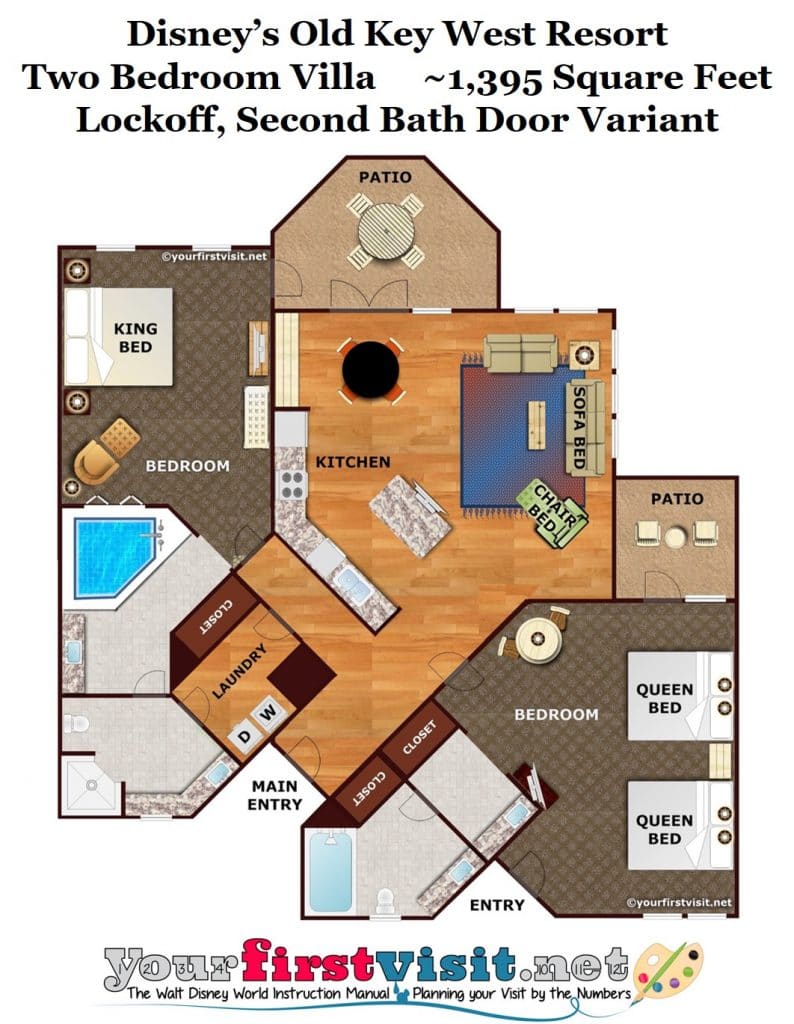 Two-Bedroom Villas add a second four-person bedroom to the amenities of a One-Bedroom, and sleep 9. This second bedroom may be a simply a Studio accessed through a connecting door, in which case it is called a “lockoff”–shown above–or it may be part of an integrated design, in which case it is called a “dedicated” Two Bedroom Villa, the floor plan for which is shown below. 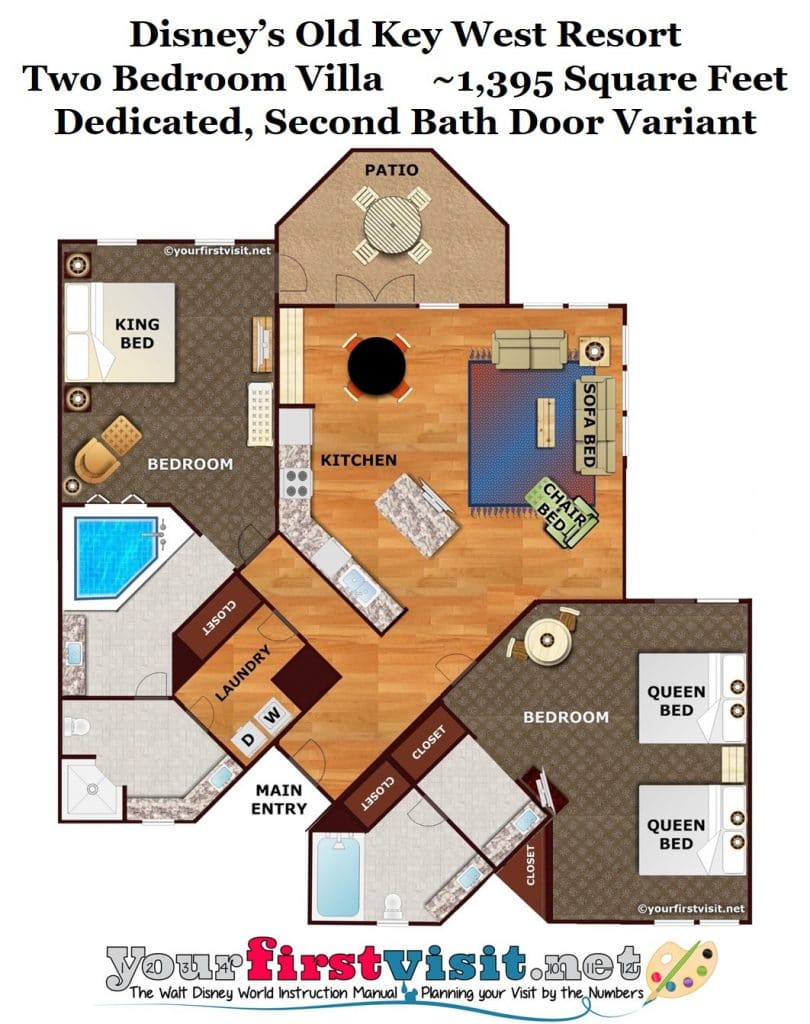 In each case, the full bath by the master bedroom may or may not have the door through the laundry room. As with One Bedroom Villas, buildings numbered 30 and higher have it, and those lower than thirty don’t. 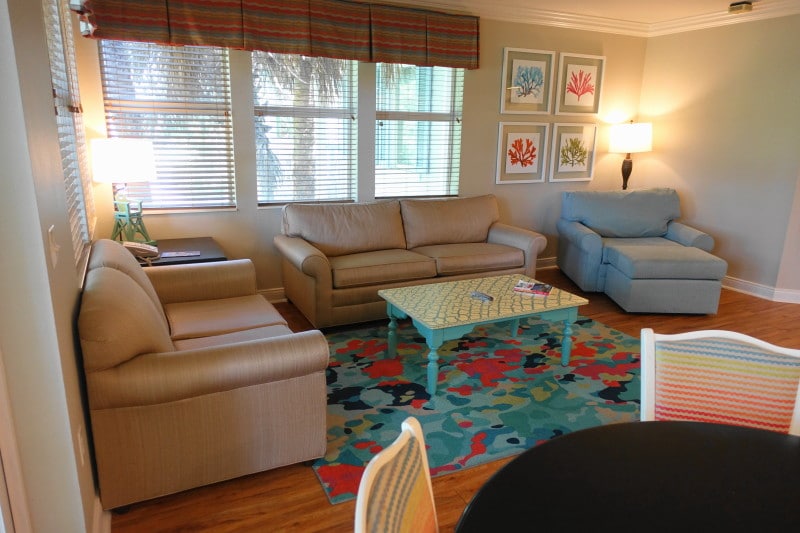 Both One and Two Bedroom Villas have much more livable living/dining/kitchen spaces than most such villas at other DVC resorts. For example, the living area comfortably seats six on the couch, love seat, and easy chair… 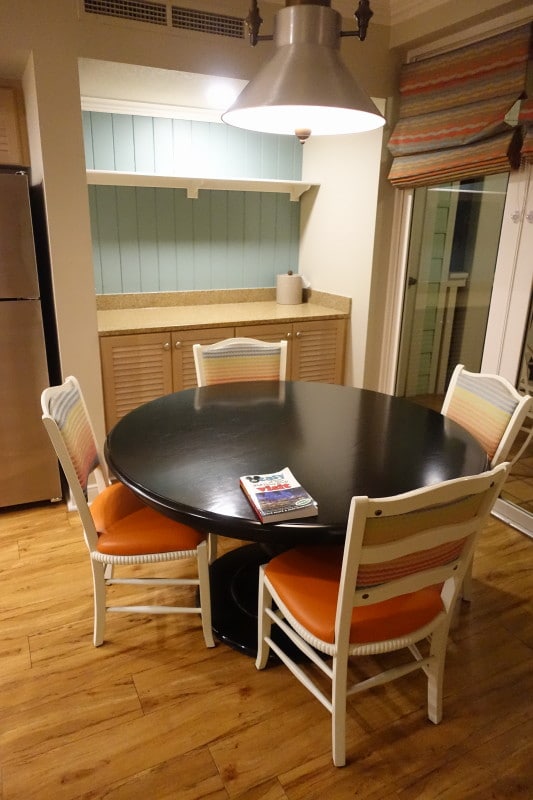 …and the dining table comfortably seats four, and you can either seat four more on the balcony table or grab a couple of chairs from it and squeeze in six at this table.

Neither of these matches the nine person capacity of a Two Bedroom Villa, but you will find plenty of DVC One and Two Bedroom Villas where the living room seats only three or four, and the dining table as few as two.

See this for more images of the kitchen/living/dining space in both One and Two Bedroom Villas at Disney’s Old Key West Resort. 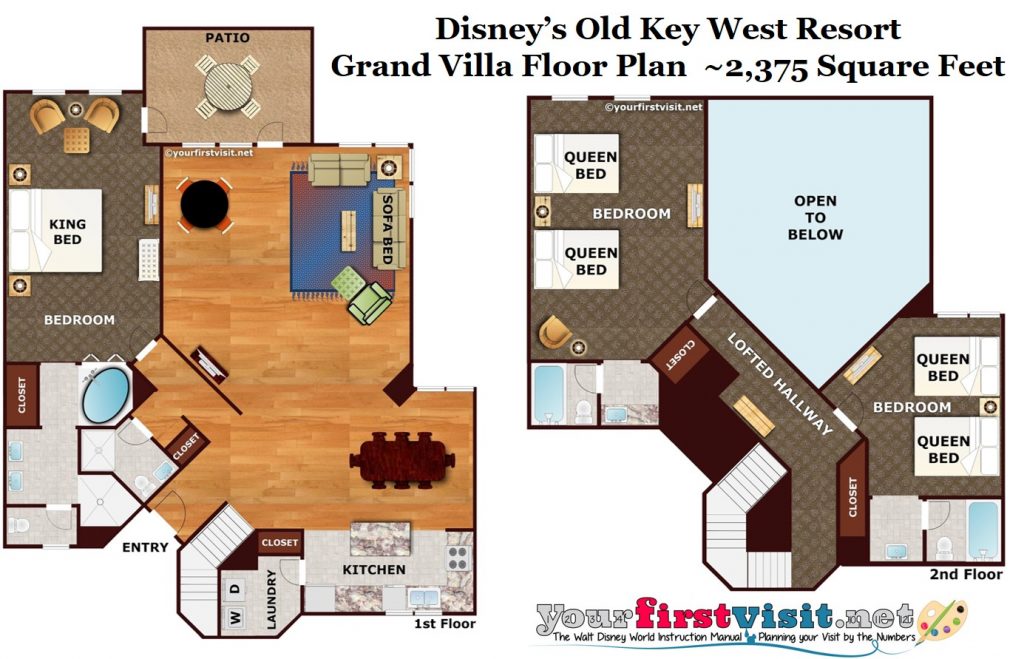 Grand Villas hold three more people in space almost twice as big as the 9-person Two-Bedroom Villas. The extra space downstairs comes from doubling the already commodious size of the kitchen/dining/living area, and moving the second bedroom to the upper level–where it is joined by a third bedroom, also sleeping four.

That said, from a floor plan point of view, many other DVC Grand Villas are more livable. Most don’t waste the space of the two story living room, and many have more seating options in their living areas.  The virtues of Grand Villas at Disney’s Old Key West Resort appear to be price and availability–there’s more than two dozen of them–not livability.

MATERIAL IN THIS REVIEW OF DISNEY’S OLD KEY WEST RESORT