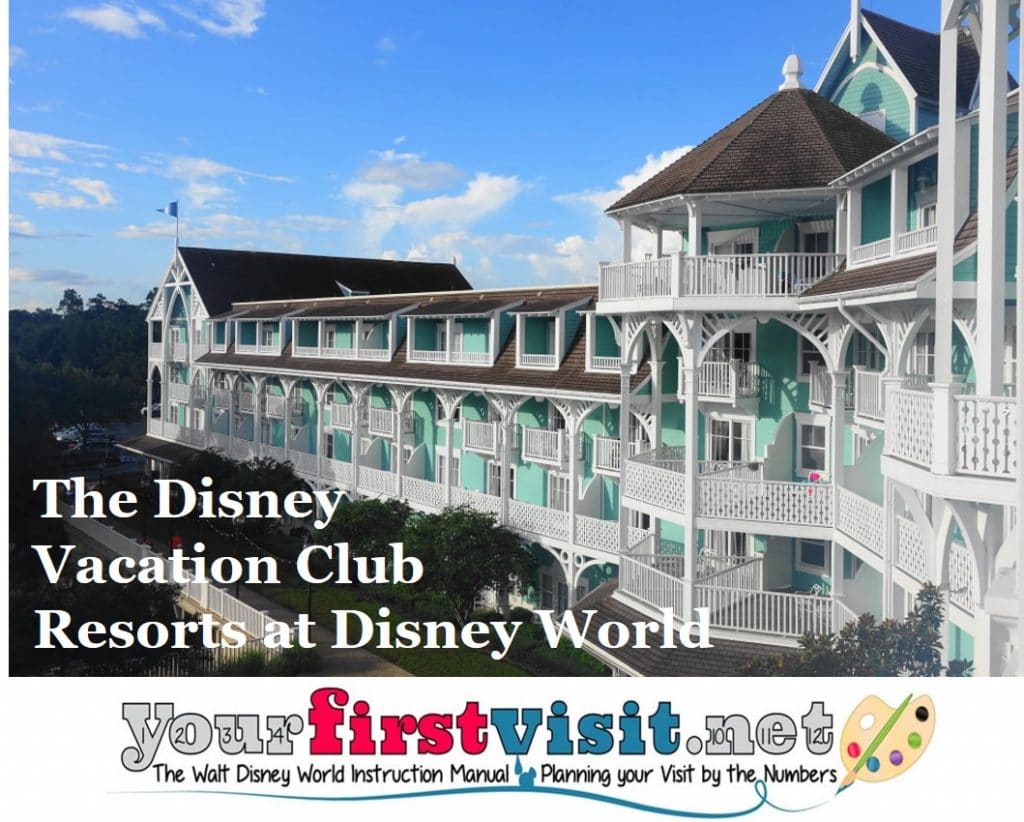 Note: guests in Disney Vacation Club Resorts/Deluxe Villas are eligible for Disney World’s Early Entry program, for early access to its paid individual system for access to certain rides, and for its Extended Evening Hours.

The Disney Vacation Club (“DVC”) Resorts (also known as “Deluxe Villas”) at Walt Disney World are time-share-like resorts. These resorts are available not only to DVC members, but also to everyone else.

You book them just like any other Disney World offering, through the regular Walt Disney World website (on its general public website, Disney World refers to these as “Deluxe Villas”), or the resort reservations phone number at 407-939-7675.

These accommodations can also be reserved (usually at a substantial cost savings, but with potentially difficult cancellation terms) by privately renting “points” from Disney Vacation Club members.

The paired resorts are the Boulder Ridge and Copper Creek Villas at the Wilderness lodge, Bay Lake Tower at the Contemporary Resort, the Jambo House and Kidani Village Villas at the Animal Kingdom Lodge, the Beach Club Villas, the Boardwalk Villas, The Villas at Disney’s Grand Floridian Resort and Spa, and the Polynesian Villas and Bungalows.

There’s variability within these overall rankings by room type–I cover the basics below, but click the links above for detailed reviews that will tell you exactly what’s what.

Four types of accommodations are typically available in the Disney Vacation Club Resorts:

Except for the studios, what’s distinctive about the accommodations in these DVC resorts is the extra space and full kitchens—neither of which will be used much during a first visit, but which can be quite comfortable and convenient for returning visitor.

For most first-time family visitors, the DVC resorts are worth considering only under a few circumstances:

Studios add to the routine amenities of a deluxe room a microwave and toaster, and commonly sleep four in a queen and a fold out-sofa. However, Old Key West Studios have two queens. Studios in Bay Lake Tower at Disney’s Contemporary Resort officially sleep four, but I wouldn’t try four–the room is too cramped when the fold-out couch is opened. A family of three, with one person can sleep on the couch cushions (54 inches of space), will fit Bay Lake Tower better. 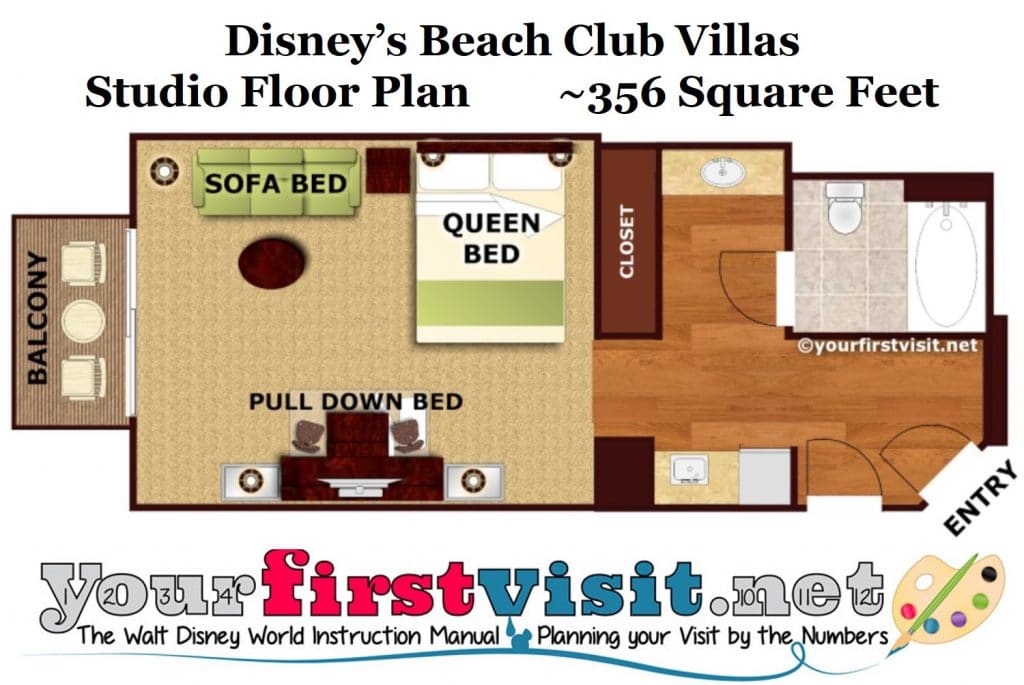 Studios that sleep five are available in the Boulder Ridge Villas at the Wilderness Lodge, the Polynesian, the BoardWalk Villas, Disney’s Riviera Resort, the Villas at the Grand Floridian, and the Beach Club Villas. The third sleeping spot is a short fold-down murphy bed that’s 72ish inches long and sleeps shorter than that. 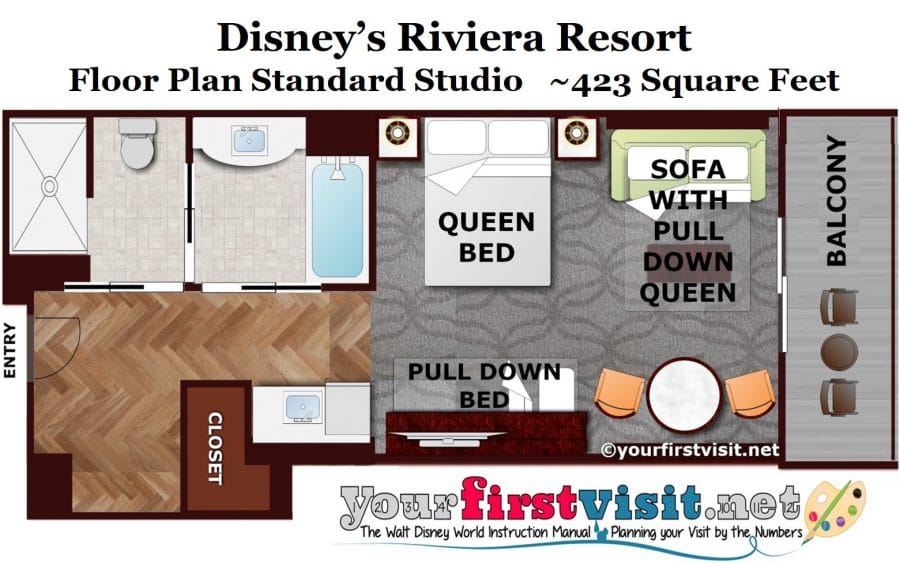 All Studios except those at the Polynesian have one divided bath, with those at Disney’s Riviera Resort and the Villas at the Grand Floridian particularly well laid out. Polynesian Studios have one full bath, and a second bath space with sink and shower.

ONE BEDROOM VILLAS AT THE DISNEY VACATION CLUB RESORTS

One Bedroom Villas sleep four or five, depending on the resort. 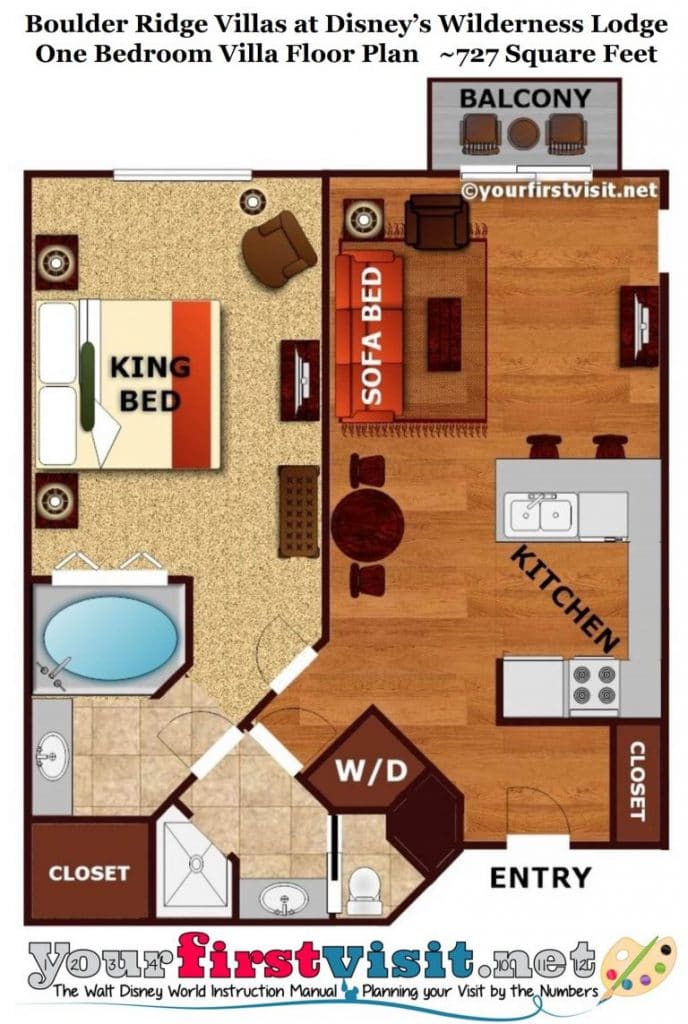 They have a king bed bedroom that sleeps two and also a combined full kitchen, dining, and living space that typically sleeps two on a fold-out couch. Old Key West, Bay Lake Tower, and the Villas at the Animal Kingdom Lodge (at Jambo House and Kidani Village) add a third sleeping spot to this area with a fold-out chair; at Riviera and the Villas at the Grand Floridian, this space gets a third spot from a fold-down murphy bed.

All One Bedroom Villas except those at Kidani Village and Bay Lake Tower have a single large divided bath; at those two, there’s a small full bath in the living/dining/kitchen area and another larger one in the king bedroom. 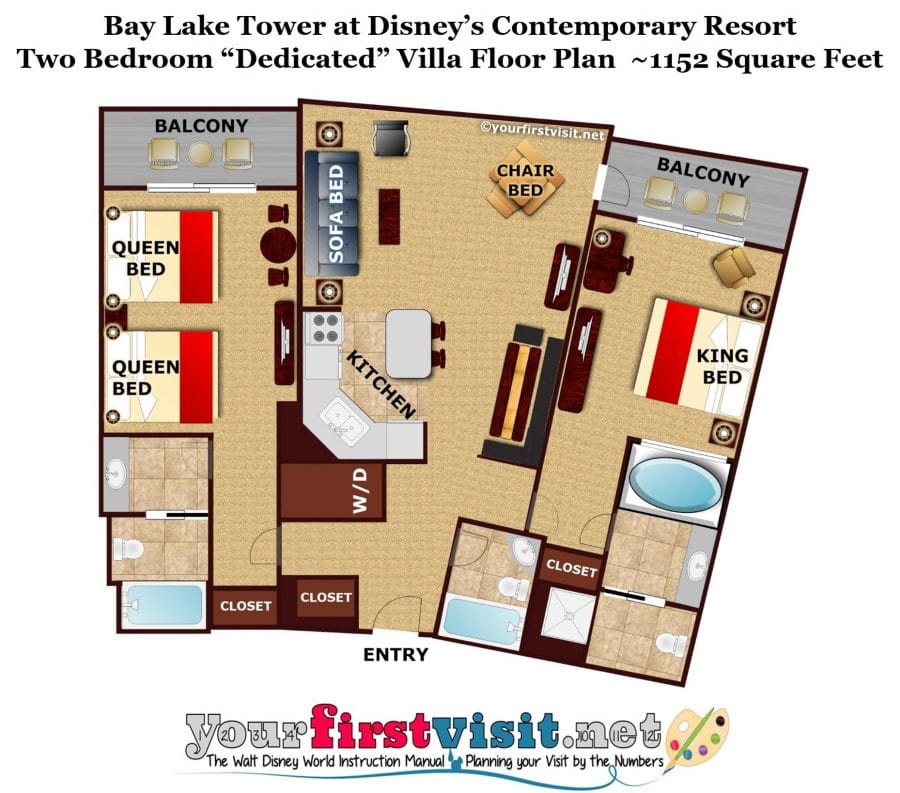 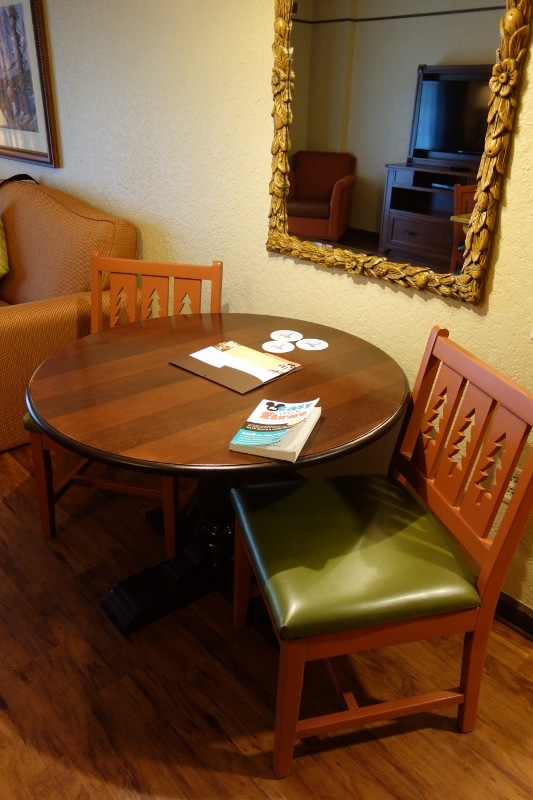 Two Bedroom Villas don’t really have the living or dining space to support the eight to ten people they will hold—a problem particularly acute at the Beach Club Villas, Saratoga Springs, Boulder Ridge Villas at the Wilderness Lodge, and BoardWalk Villas. See the dining area in One and Two Bedroom Villas at Boulder Ridge above. (To be fair, in resorts with such a small table, typically there is also a two person breakfast bar.)

Chairs can be moved around to add seats in these smaller spaces, but larger groups will find the Two Bedroom Villas at Riviera, Old Key West, the Villas at Disney’s Grand Floridian, Kidani Village, and Bay Lake Tower much more livable. 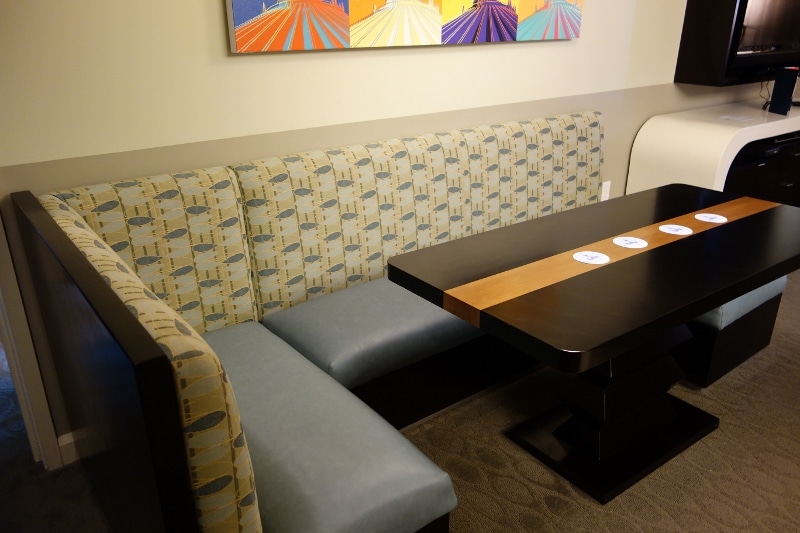 Above is the dining area in One and Two Bedroom Villas at Bay Lake Tower.

Grand Villas, available at all the Disney Vacation Club resorts except the Beach Club Villas, Boulder Ridge, and the Polynesian Villas and Bungalows, sleep 12 in a king room, in two more bedrooms with two beds each, and one or more sofa beds. They typically have around twice the living/dining/kitchen space of Two Bedroom Villas–with ~three times as much at Copper Creek and Riviera. 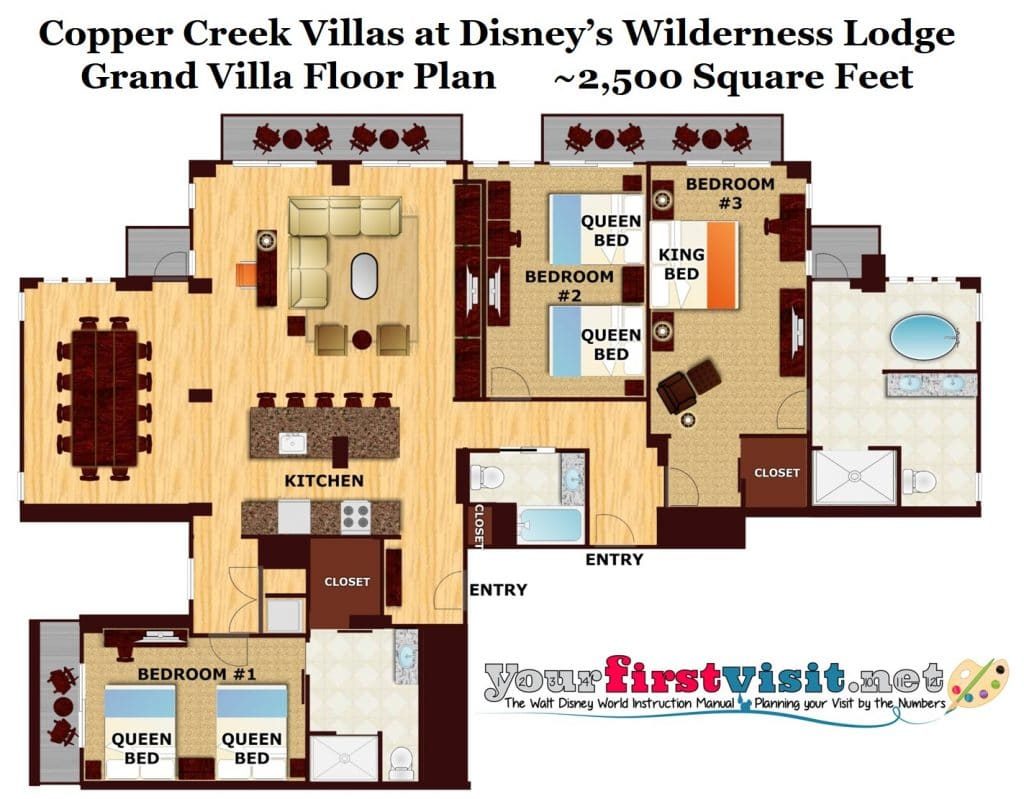 There’s more variation among the Grand Villas than in any other DVC accommodations, so for more on these huge spaces that can go for more than $2,000 a night, see the links near the top of the page.

OTHER SPACES AT THE DISNEY VACATION CLUB RESORTS

There are a few other rarer room types:

The long-time travel agent partners of this site, Destinations in Florida can book you at a Disney Vacation Club resort or anywhere else at Disney World.  Contact them using the form below!