For the first page of this review of Disney’s Grand Floridian Resort & Spa, click here.

In their recommended order for first time family visitors, they are 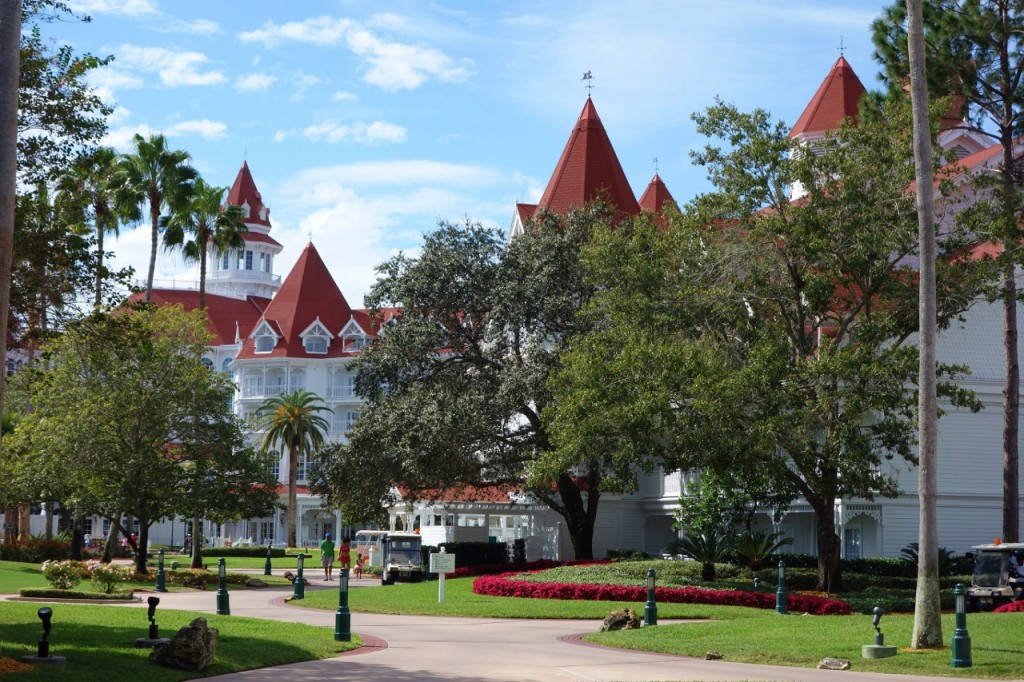 Disney’s Grand Floridian Resort & Spa opened in July 1988, and saw its last major renovation in 2014. While this refurb was not all that long ago, the most recent Disney World hotel refurbs have outclassed its rooms a bit in terms of powerpoints, TVs, storage, bath privacy and other dimensions of livability. For a photo tour of a Grand Floridian room, see this. 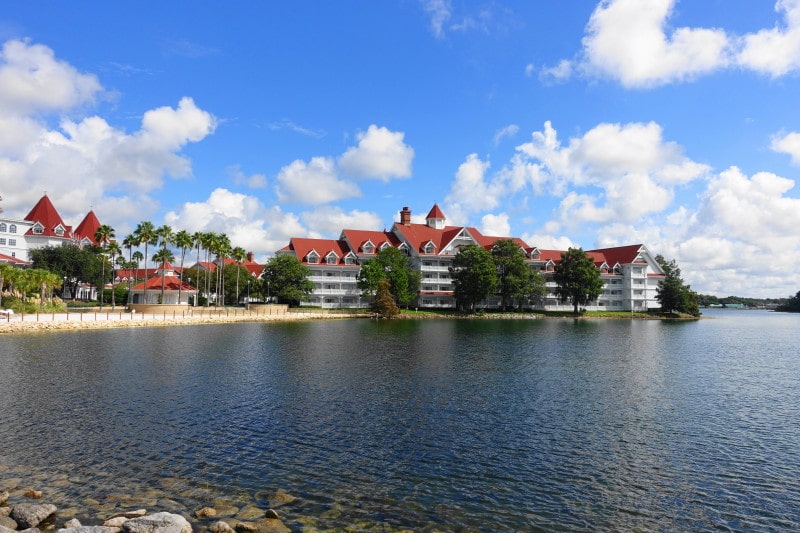 According to Disney World’s website, the Grand Floridian is

“a Victorian-style Disney Deluxe Resort distinguished as the flagship hotel of Walt Disney World Resort and offering world-class dining, entertainment and luxurious accommodations in its 6 striking red-gabled buildings. This magnificent hotel sits along the white-sand shores of Seven Seas Lagoon …With its gleaming white exterior, intricate gingerbread trim and gorgeous stained-glass domes, the Resort is an architectural marvel.”

The theming is sometimes claimed to reflect the design and grandeur of Henry Flagler’s Florida hotels, which were meant to attract well-off Ohioans and northeasterners to his Florida East Coast railroad. Anyone who has seen, for example, the remaining Flagler hotel buildings in St Augustine, will understand that this is nonsense. 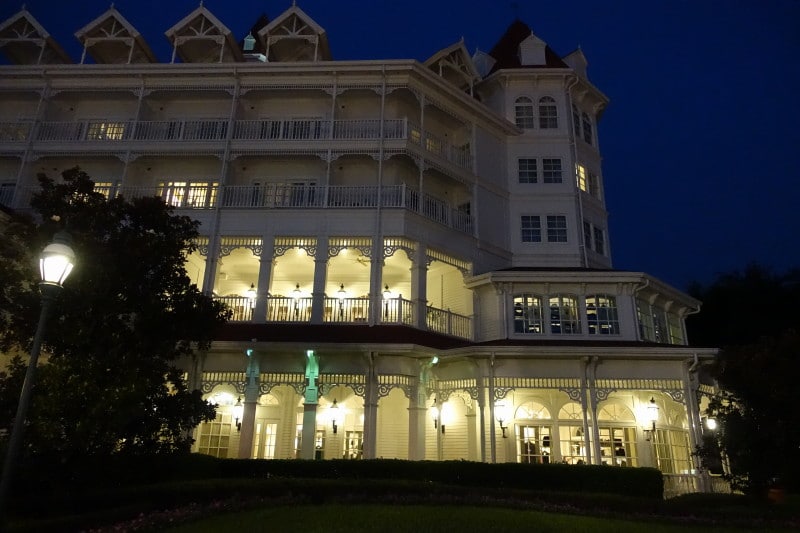 The Grand Floridian is a creation of the Disney imagineers, and more influenced by southern California hotels (especially the Hotel del Coronado) than any Flagler edifice. It is the only hotel at Walt Disney World fundamentally designed by Disney’s imagineers, and they did a glorious job with it.

It is remarkable for not only its beauty but also its serenity. To relax at the main pool, surrounded by the glorious buildings, is to fully take advantage of the ability of architecture to add peace to life. 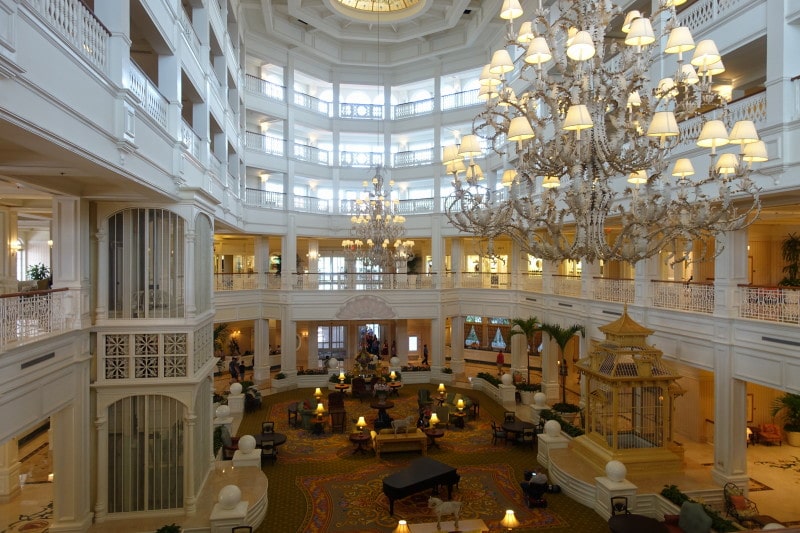 The vaulted lobby is also a favorite, and there’s a group that returns to the Grand Floridian every year in November to watch its famous Christmas decorations be re-created here. 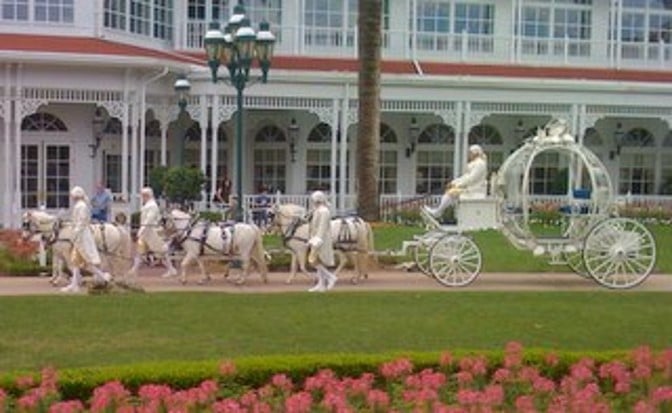 The resort is also popular for weddings and honeymoons. As noted on the first page of this review, the interior decor is conventional and somewhat dull, and the resort has no particular kid-appeal. But for adults who welcome, or can overlook, the dull interior decor and lack of kid appeal, the Grand Floridian is a wonderful place to stay.

The Grand Floridian is a step above other Walt Disney World deluxe resorts on a couple of dimensions, with architecture, dining and minor amenities–such as robes–being at the top of the list.  What it is not is a peer to world-class luxury resorts such as the Four Seasons.

All Disney deluxe resorts have standard rooms; concierge rooms, which Disney calls “club” rooms; and suites. (See this for more on suites at Walt Disney World.) 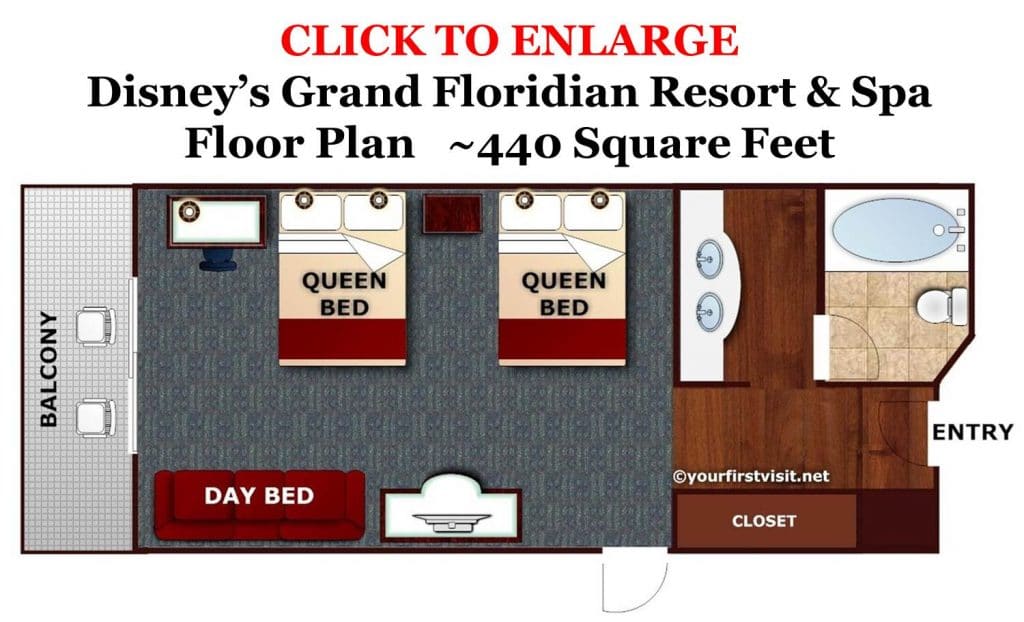 At Disney’s Grand Floridian Resort, multiple room types exist. Standard rooms, and most club/concierge rooms, sleep either four or five, five in two queens and a fold-down day-bed. A floor plan for a standard five person room is above, and a photo of such a room is below. 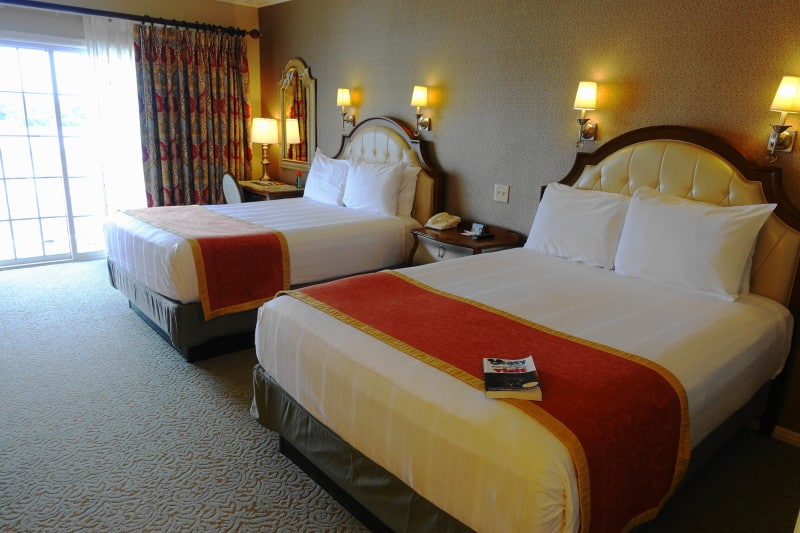 For a full photo tour of a room at Disney’s Grand Floridian Resort, see this.

“Dormer” rooms sleep 4 in two queens, are a little smaller than standard rooms, have much smaller balconies, but offer a vaulted ceiling. King bed rooms are also available.

The Grand Floridian also has multiple types of deluxe rooms and a ton of suites. I’ll return to these in a minute.

I generally advise against special room types for first-time visitors, as they won’t be spending much time in their rooms. However, they may be well worth it for families intending to spend more time at the Grand Floridian Resort than implied by this site’s itineraries.

TikimanPages.com has a great discussion of the value of club/concierge rooms here. Though focused on the Polynesian, it applies to any deluxe resort. Moreover, in an experiment for 2018, certain club level rooms that meet specific requirements (mostly, paying more) have access to extra FastPass+ that are bookable at 90 days from departure and free of tiering restrictions.

Lagoon views mean you can see the Seven Seas Lagoon from your balcony.  Theme Park views mean that in addition to the lagoon, you can see the Magic Kingdom, and most importantly, the evening fireworks show–although views of this are off center.

Most Grand Floridian club rooms are the same size as the rest of the resort’s rooms. However, there’s also several types of “Deluxe” concierge rooms, and more than two dozen one and two-bedroom suites.

Deluxe rooms (and most one-bedroom suites) don’t offer any more sleeping capacity–some offer less–they just give you more space, and more separate spaces, for your family to live in. 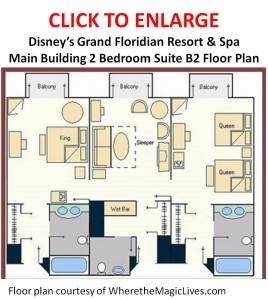 Most one bedroom suites are two bays wide, and most two-bedrooms three bays. 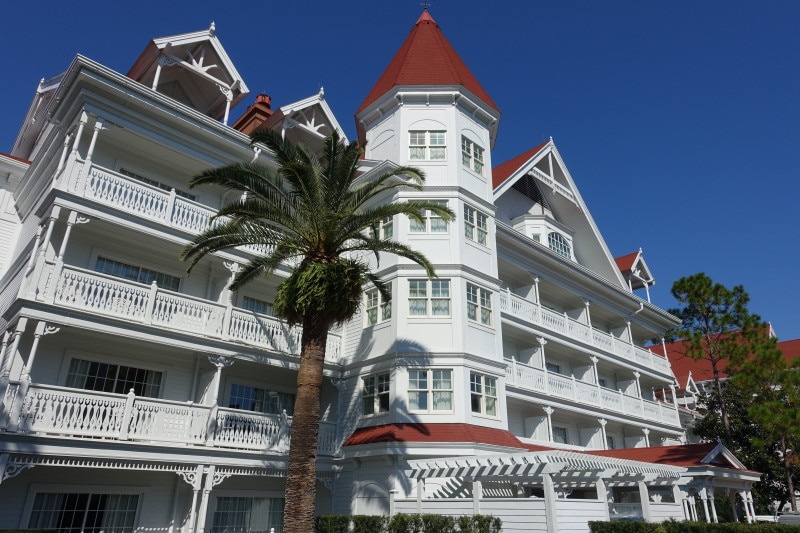 Exceptions in the main building include the Walt Disney Suite and Roy O. Disney Suite, the equivalent of 4 bays each, and the Presidential Suite, also known as the Grand Suite, about five bays. 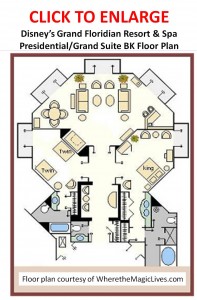 These are each folded into main building turrets–very cool.

See the image for the Presidential Suite floor plan.

The two Outer Lodge Hospitality Suites on the first floors of Conch Key and Sago Cay are four bays each. They have the usual standard king and queen connecting rooms at the end, separated by a two-bay living space.

As you can tell…suites at this resort are quite different.  Work with a travel agent if you are interested in suites at the Grand Floridian. Kelly B is the travel agent I recommend. Call or text Kelly at 980-429-4499 or request a quote below.

For more on suites, see this, and for more on larger families seeking deluxe options, see this.

Note that to all the capacity figures above you can add a child under three in a crib. In standard rooms, a crib fits nicely between the dresser/TV and the closet.

PAGES IN THIS REVIEW OF DISNEY’S GRAND FLORIDIAN RESORT