(To return to the first page of this entry, click here.)

For example, the 14th floor of the Contemporary resort includes a total of 6 two-bedroom suites. These 6 have 4 different floor plans, 4 floor plans with 4 bays, and 2 with 5 bays. 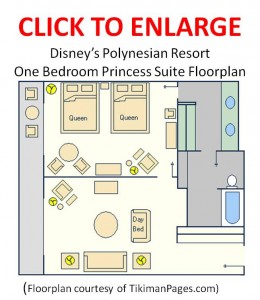 One bedroom suites can be found at deluxe Walt Disney World Resorts that sleep between 3 and 7 people.

Click the image for an example from the Polynesian Resort, courtesy of Tikimanpages.com.

Two bedroom suites can be found at Walt Disney World Resorts that sleep between 4 and 10 people.

Click the image for an example from the Polynesian Resort, courtesy of Tikimanpages.com.

The few two bedroom suites that sleep more than 8 have a variety of arrangements. The master bedroom can have a king or two queens; the second bedroom a 2 queens or two queens and a junior daybed; the parlor a daybed or a sleeper sofa.

Suites are always part of their resort’s “club level.” (Disney calls what the rest of the hotel industry calls concierge service “club service.” This is because Disney has staff labeled concierges at its front desks. The Disney front desk concierge staff works with all resort guests to solve problems, and to access theme park tickets and dining reservations. “Club staff” do for “club level” guests what “concierges” do at non-Disney resorts…to make this more confusing, the “club” in this nomenclature has nothing to do with the Disney Vacation Club…)

Specific details on what suites are available, at what resorts, at what price, is available from the “Rates and Room Types” pages on the Walt Disney World Website. (See below.)

The Disney pages material can be somewhat incoherent—e.g. describing the same suite as first one and then two bedrooms in consecutive sentences… A call to the resort’s front desk, or a very good travel agent, can help sort suite options out.