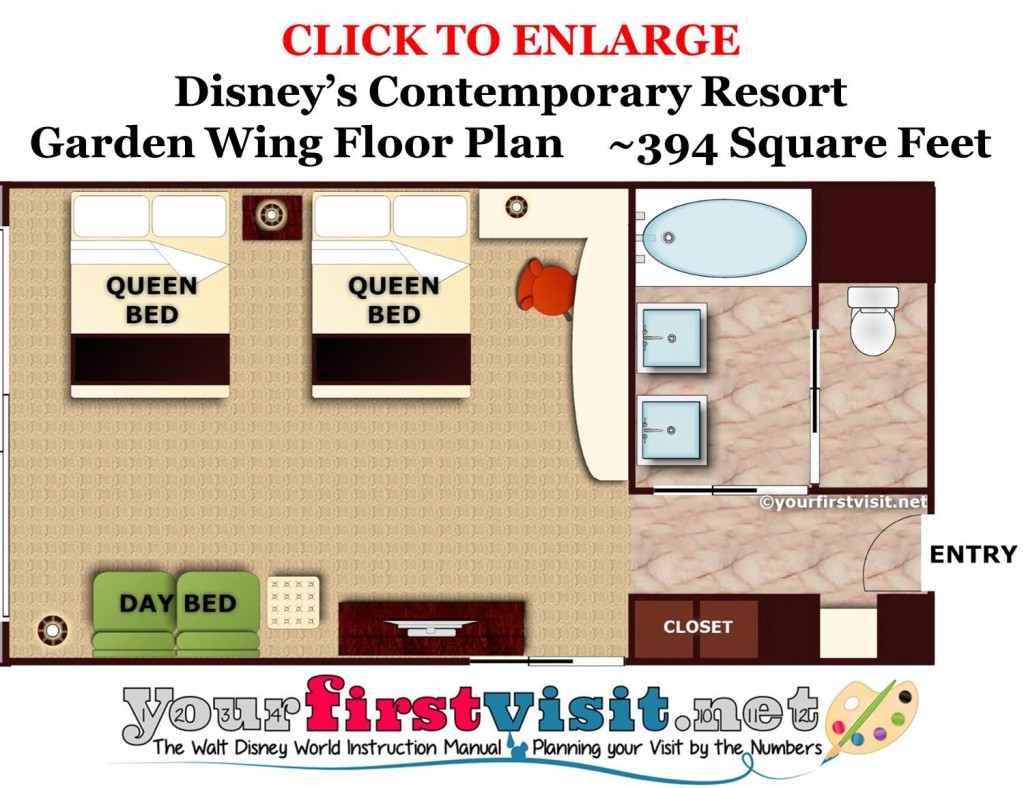 For the first page of this review of Disney’s Contemporary Resort, click here. 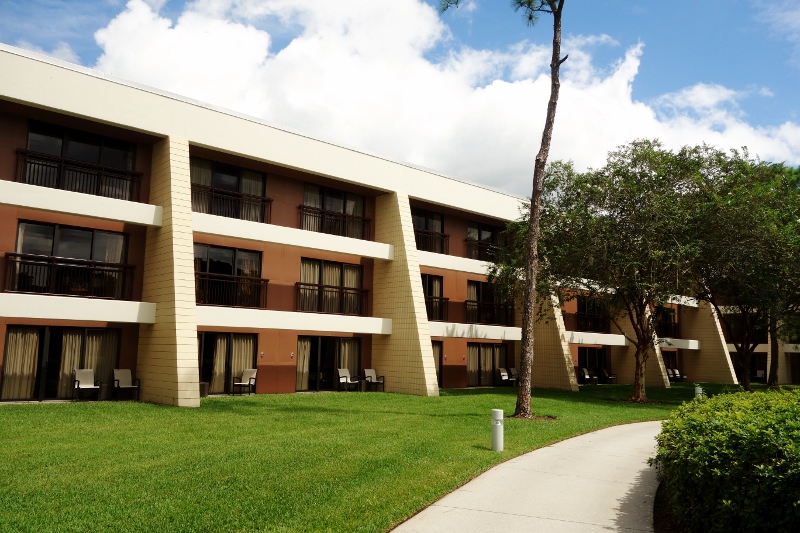 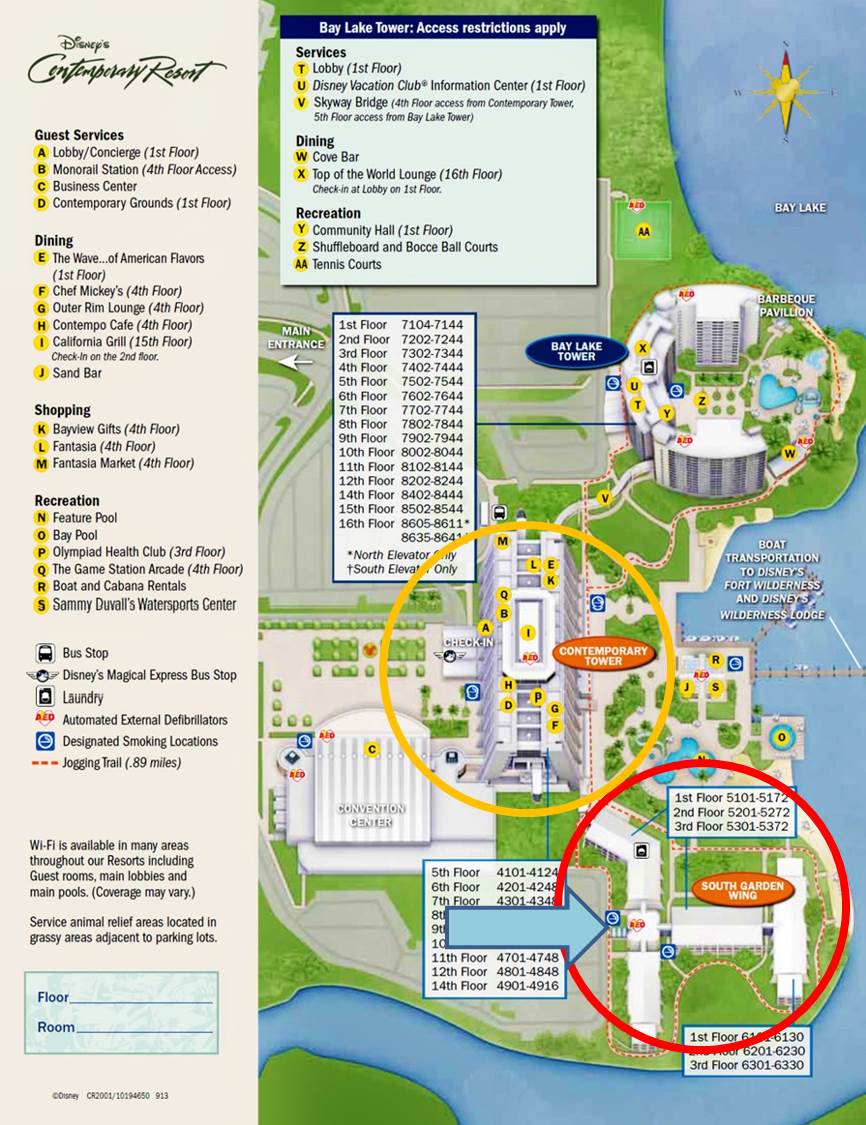 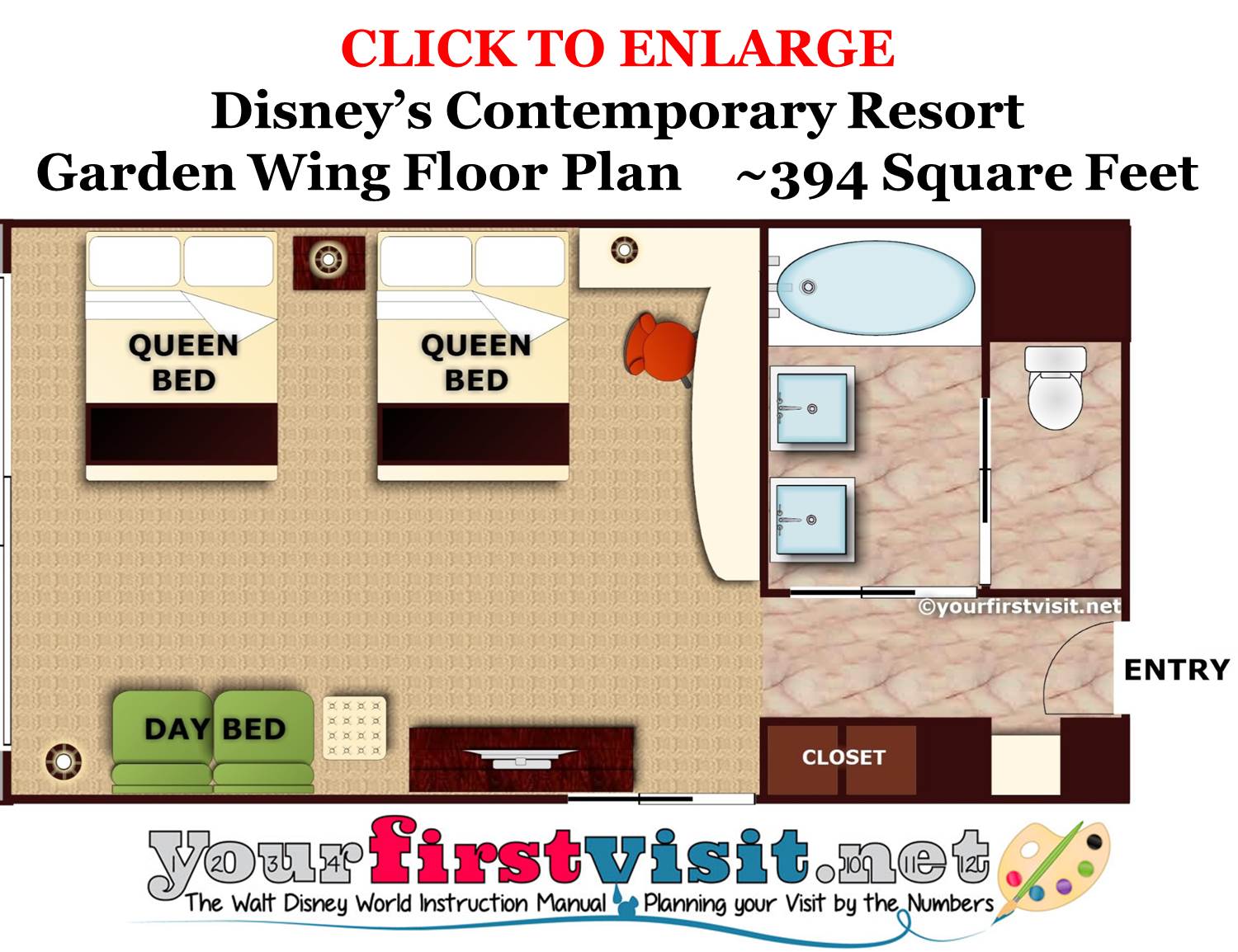 The interiors of Garden Wing rooms have fittings, fixtures, fabrics, and dimensions identical to those of rooms in the main Tower–I confirmed this with my trusty tape measure–and so except for the absence of balconies have the same pros and cons covered in detail here.

See that link for a full photo tour of a Contemporary room, but the basic photos are below. 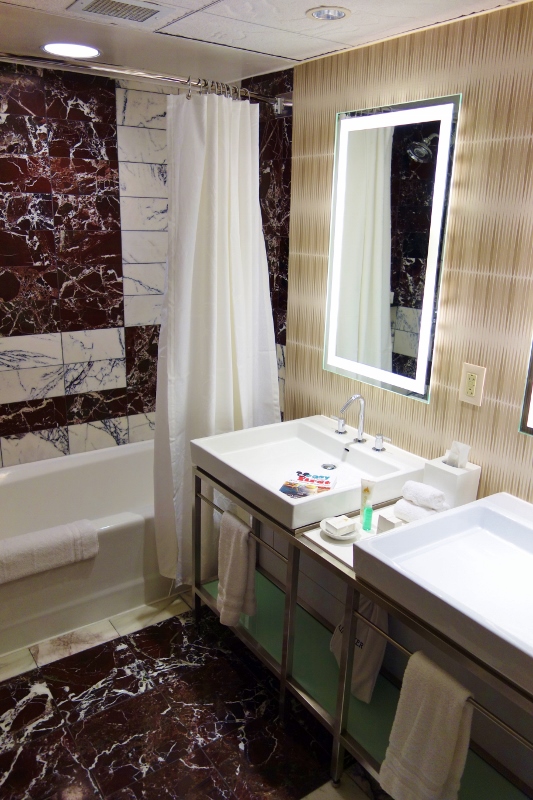 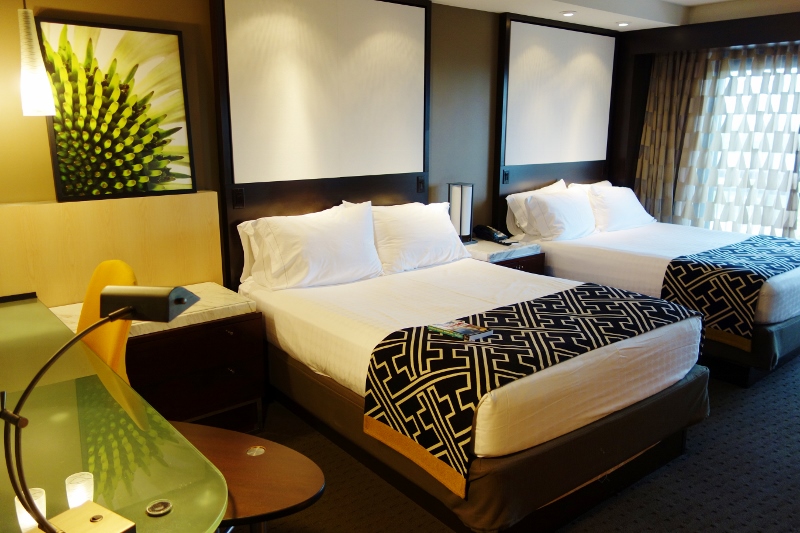 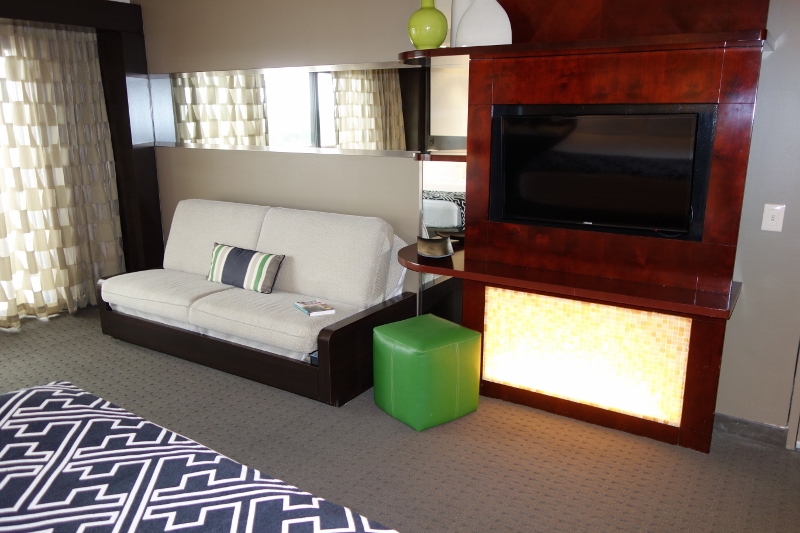 On pretty much every other measure, though, except parking convenience, Garden Wing rooms are lesser than the Tower rooms, and as a result are a good bit less expensive.

While savings vary depending on the price season, in 2016 typically Garden Wing rooms are around 70% to 2/3 the cost of other Contemporary rooms–around $200 less expensive per night than Bay Lake view Tower rooms, and $250 less than Magic Kingdom view Tower rooms.

The main negatives of the garden rooms are their absence of balconies, and the distance of most from the main Contemporary tower and its services.

PATIOS AND BALCONIES IN THE GARDEN WING

The three story buildings that make up the Contemporary Garden Wing have patios for first floor rooms, but no balconies on the upper floor rooms. 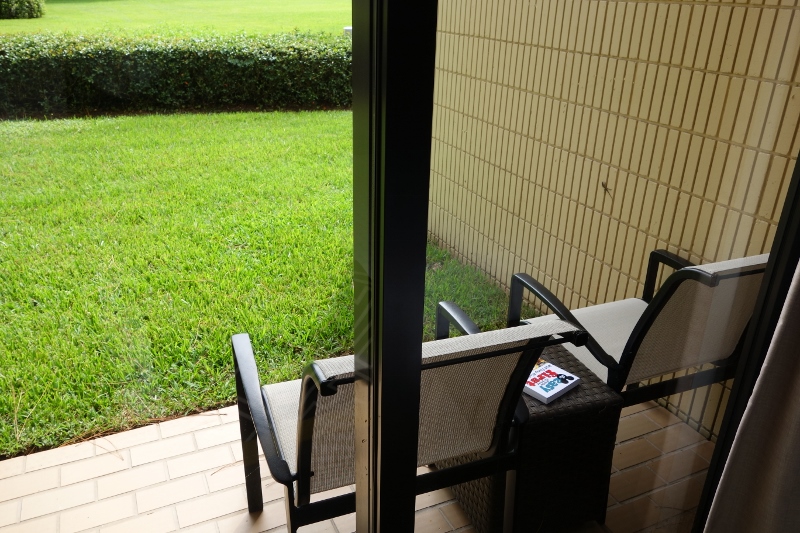 Here’s the patio from my first floor room, from the inside… 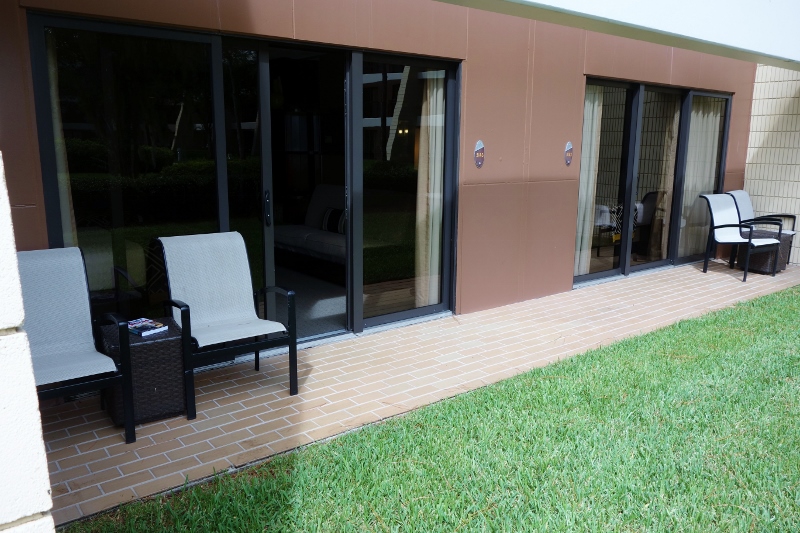 …and from the outside.

Note that there’s no privacy barrier between the patios of neighboring rooms.

Now the absence of a balcony will not be a deal killer for some. After all, only two-thirds of standard Polynesian rooms have a balcony or patio, and many Beach Club rooms have balconies too small for any use but drying towels.

The other issue with the Garden Wing is the distance of many of its rooms from the main Contemporary services. 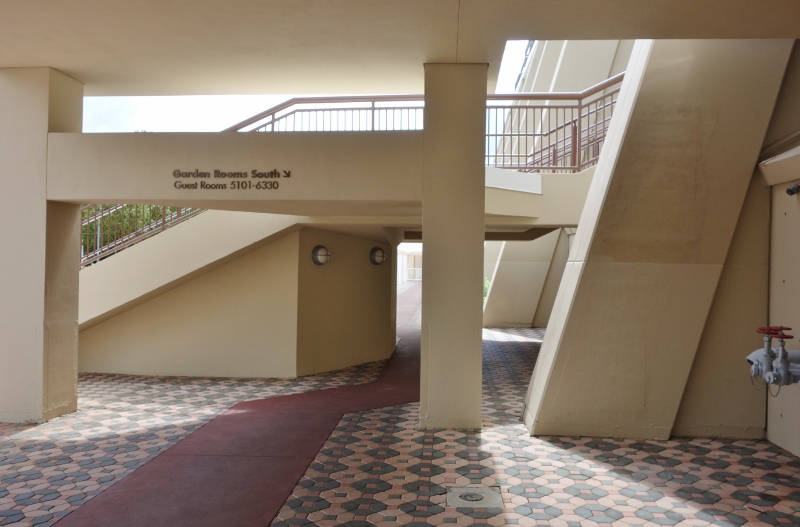 The high rise makes Tower rooms the most easy to access Disney World hotel rooms, with no Tower room more than 200ish feet from the elevators that also give access to the dining, shops, and transportation points.

In contrast, the Garden Wing rooms are all further than that, and some are as far as a thousand feet from the elevator bank in the Tower. 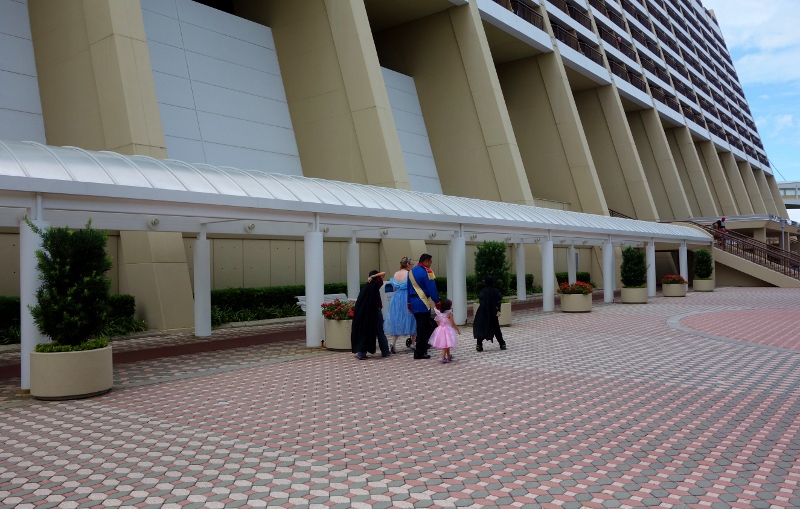 You get back and forth to the tower along a shaded path that parallels the back Bay Lake side of the Tower.

Now a thousand feet sounds like a lot–and it is a lot, after a long day at the parks, or if you are hurrying to get to Magic Kingdom rope drop–but it’s no further than the farthest rooms at the Polynesian or Grand Floridian from their respective centers.

Rather, like the balcony issues, it’s just something to keep in mind when you choose these rooms…

PARKING AT THE GARDEN WING

One place where the Garden Wing shines is parking. Most parking at the Contemporary is off on the Bay Lake Tower side, and getting from your car to your room can be a hike. 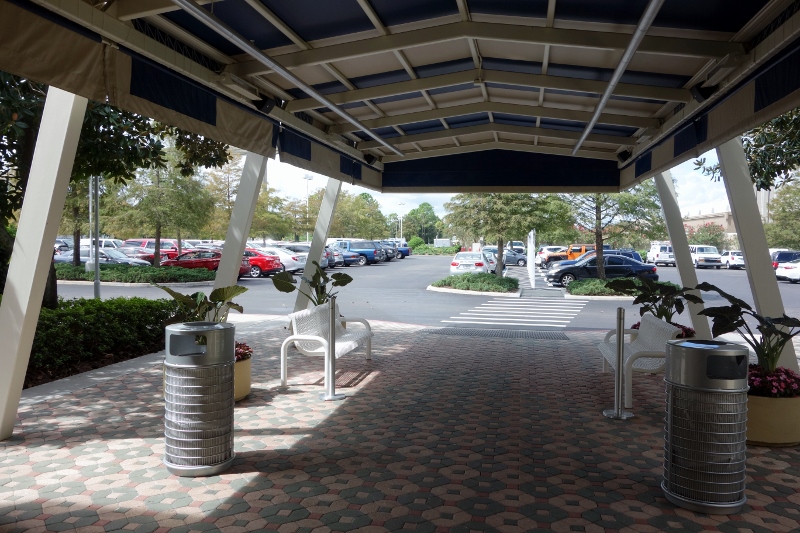 The Garden rooms, however, have their own parking lot.  Keep going past the Tower and continue around and behind the convention center and you’ll find a lot just outside the Garden wing. 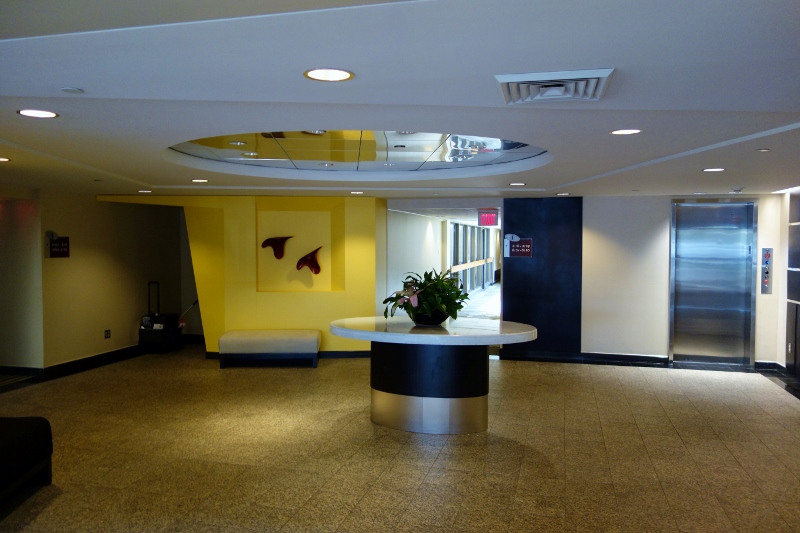 There’s even a little (un-staffed) lobby here, a much prettier way to enter the Garden wing than the kind of tatty entrance to the wing that’s closest to the Tower.

VIEWS AT THE GARDEN WING

Some Garden Wing views are of the parking lot, but most are of grassy areas or the waters. 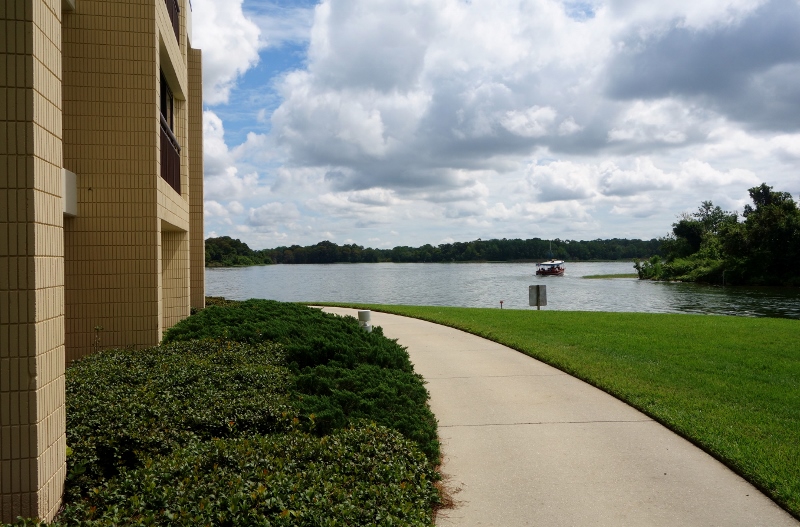 This is the area near the canal from Bay Lake to the Seven Seas Lagoon and the Magic Kingdom, with Bay Lake in the background… 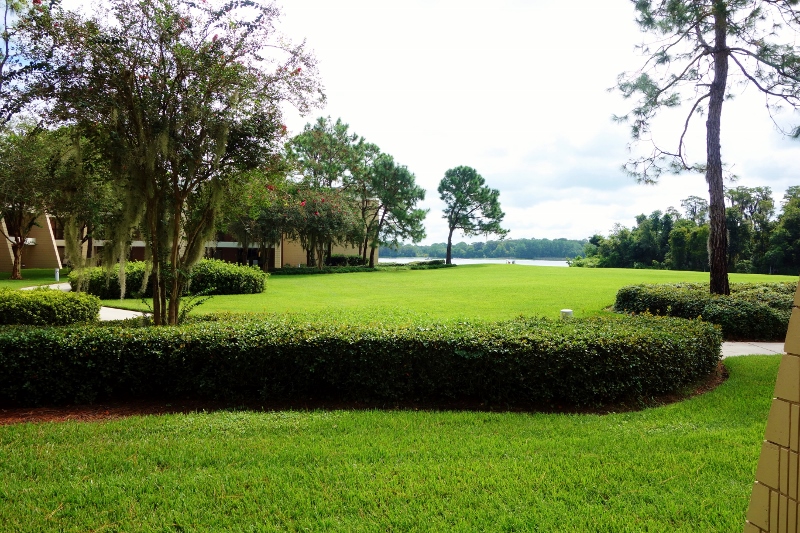 …and this is the view from the patio of my room.

Now some have been known to get excited by the tranquility of these views, but I don’t think they can match the interest or beauty of the Tower views. 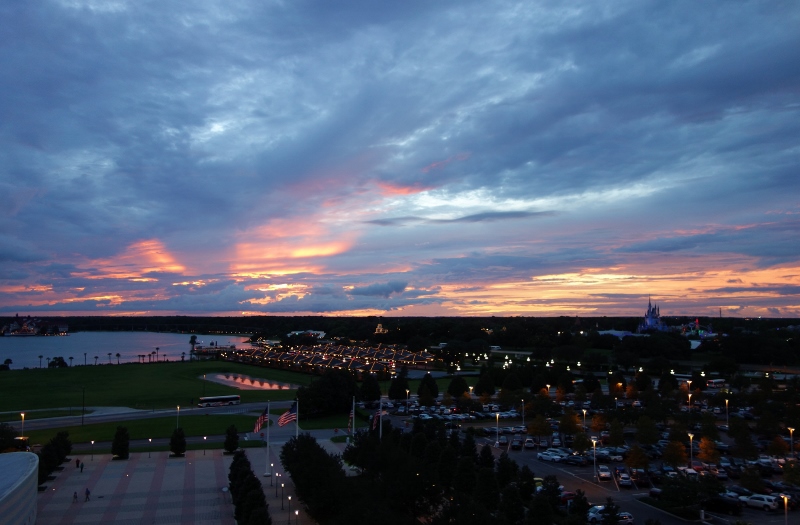 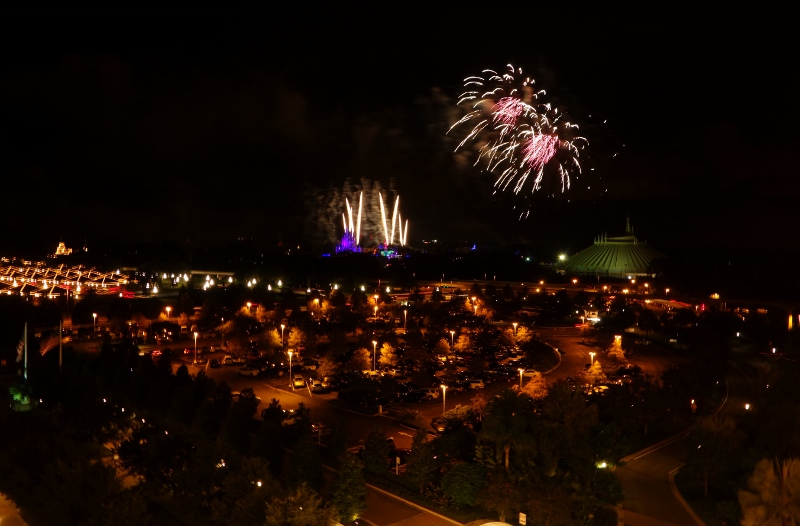 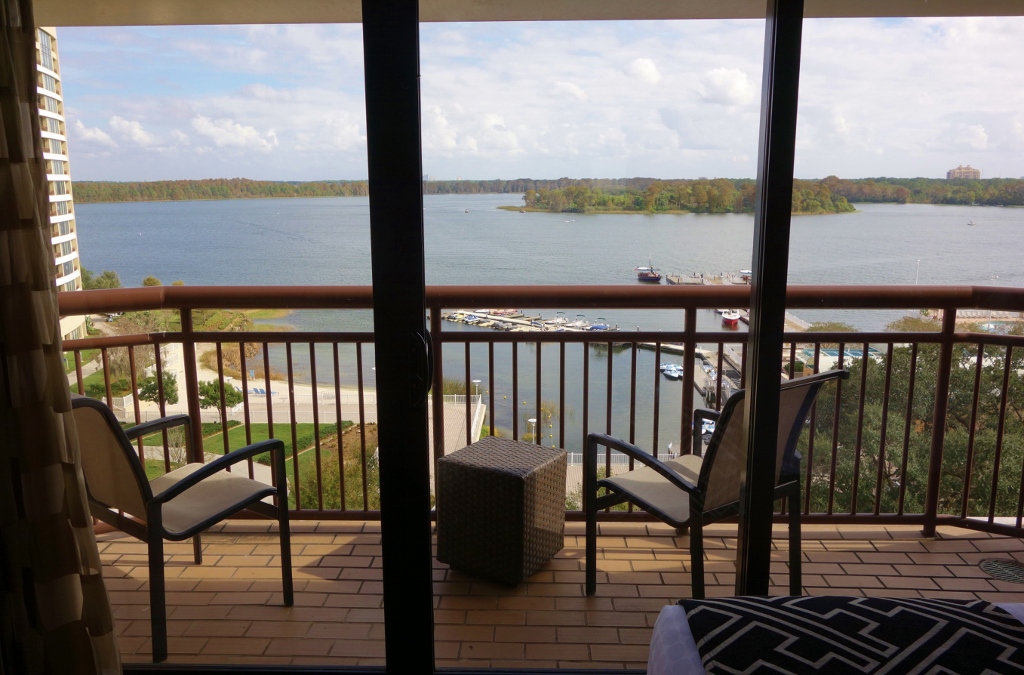 …and this from one of our stays in a Bay Lake view Tower room.

The Contemporary overall has a lot of positives, with dining and easy access to and from the Magic Kingdom being at the top of the list.  The South Garden Wing rooms participate in all these positives at a lower price than Tower rooms, at the cost of some extra walking, missing balconies and much weaker views.

Most first time family visitors will be better off in the Wilderness Lodge–about the same price point, much better theming, and balconies. But if you are aching to stay at the Contemporary, but can’t, or won’t, pony up for a Tower rooms, then the Garden Wing is a good option!

TOPICS IN THIS REVIEW OF DISNEY’S CONTEMPORARY RESORT