(For the first page of this review of Universal’s Cabana Bay Beach Resort, see this.) 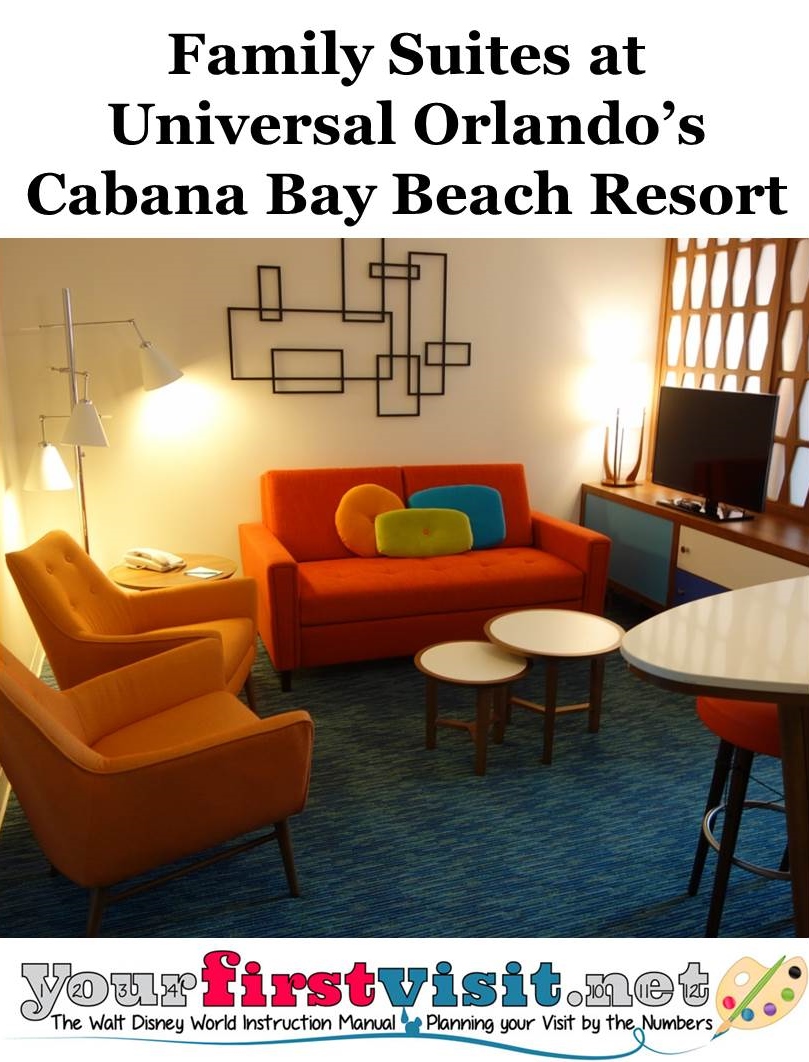 The result in Disney World family suites is 33-45% more square feet per person than standard value rooms when both are at capacity, two baths–at least one divided–and in a design choice that we’ll come back to, a private queen bed room, with the other four sleeping spots in the living areas.

Universal’s floor plans at Cabana Bay Beach resort are profoundly different.   At 430 square feet they are much smaller (much cheaper too), and compared to the 300 square foot Cabana Bay standard rooms you actually get fewer square feet per person at capacity in the Cabana Bay family suites than in its standard rooms. One bath.  The bedroom space has two queens, not a sole queen for adults.

Cabana Bay’s standard two queen rooms basically follow this minimum model, but add a foot or so of length.

In the sleeping area, two feet is taken from the bed space and added to the four feet of additional width to create a walk-in closet and a long bath behind a wall on the long side of the bedroom.

This leaves a space at the entry to the room where normally you’d find the bath and closet, and in its added length and width you’ll find the kitchenette, a table, and a living area with a fold-out couch. 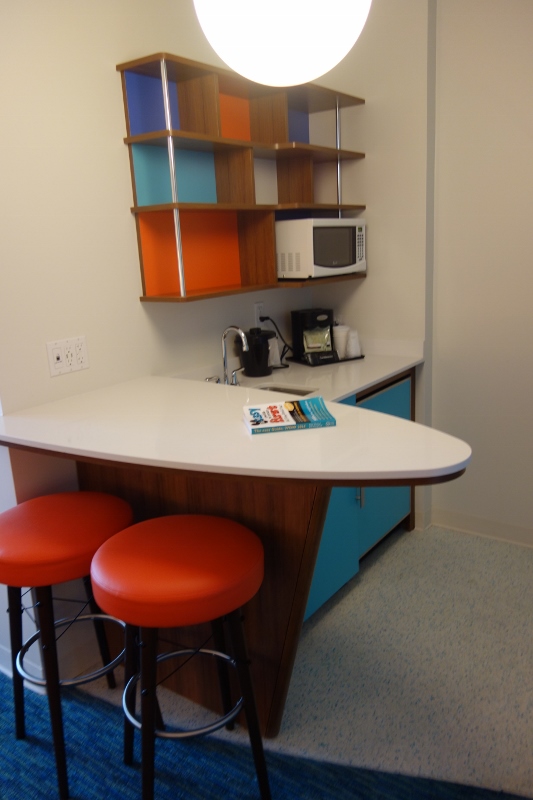 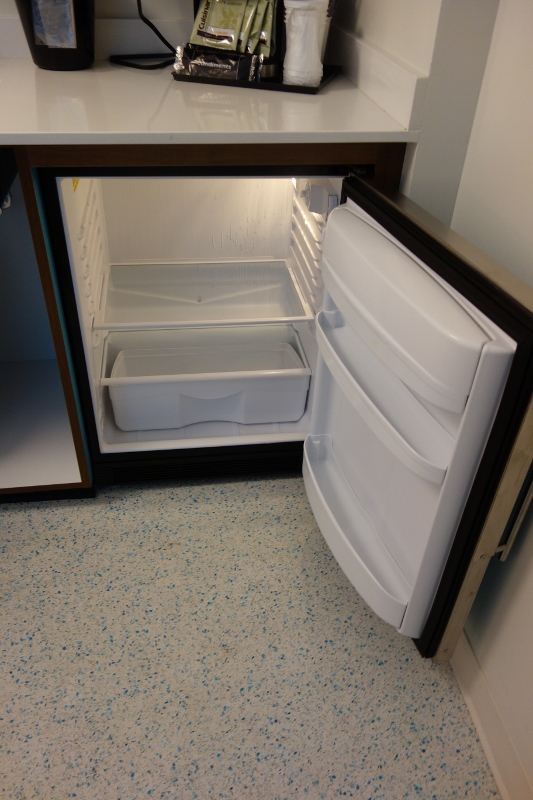 One side of this area has the kitchenette with a microwave, coffee-maker, mini-fridge, and storage.

A high table with chairs for two (high enough that more–by which I mean Mom–can stand at it, but there’s not much standing room here) divides the kitchen area from the living area. The connecting door, if there is one, is also here. The connecting doors connect only to another family suite—not to standard rooms. 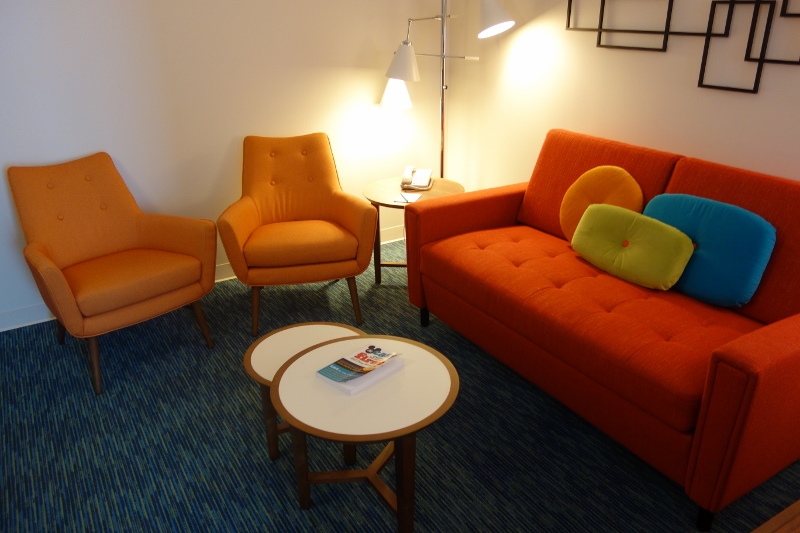 On the other side you’ll find the living room space, with the sofa, a couple of small arm chairs, and some tables handy for your important books. 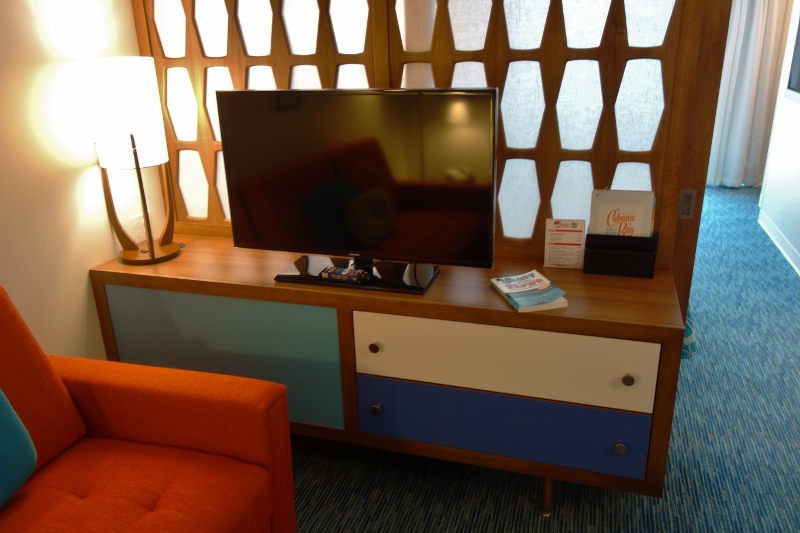 At the other side of the couch is this TV/dresser combo. The two drawers on the right serve this space–two on the other side, behind the large panel to the left, serve the bedroom. 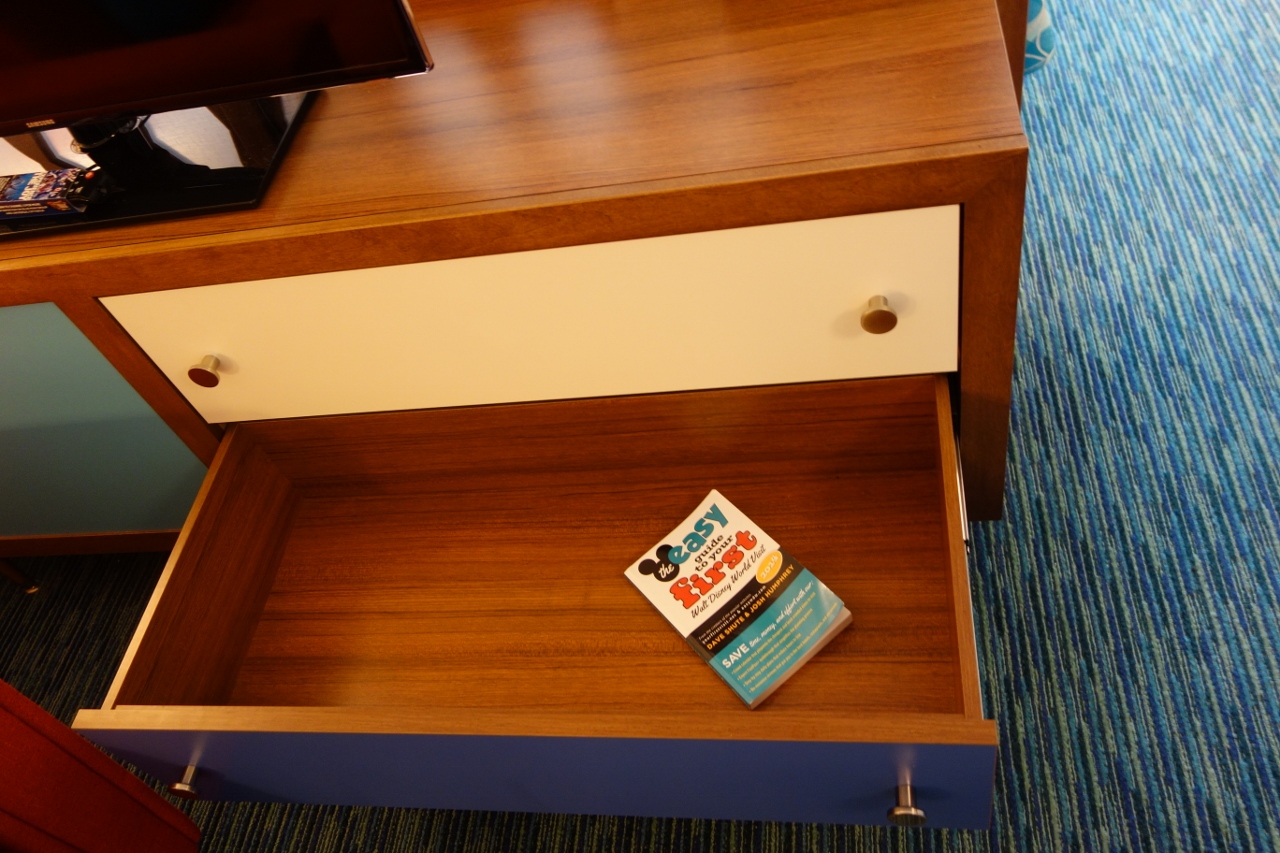 The drawers themselves are good-sized, but in total this is not enough drawer space for the six people this suite will hold (there’s some more storage space in the shelves and cabinets in the kitchenette). 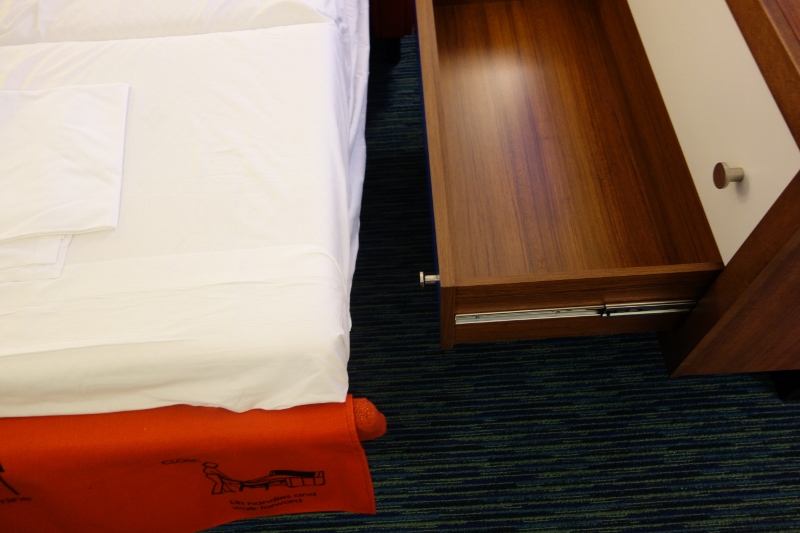 Moreover, when the sofa is unfolded, you can only get to these drawers from the side. 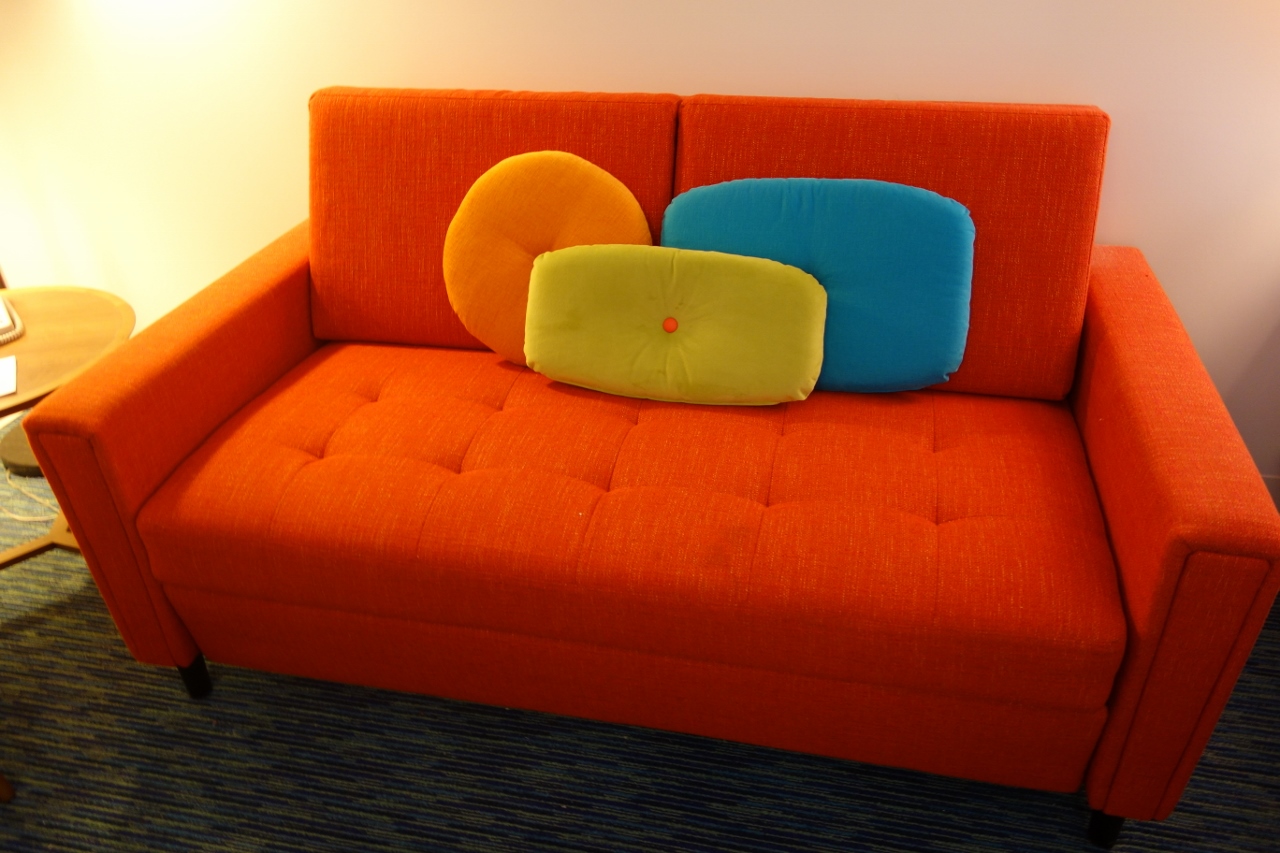 To unfold the sofa bed, first you move the tables and take off the cushions. 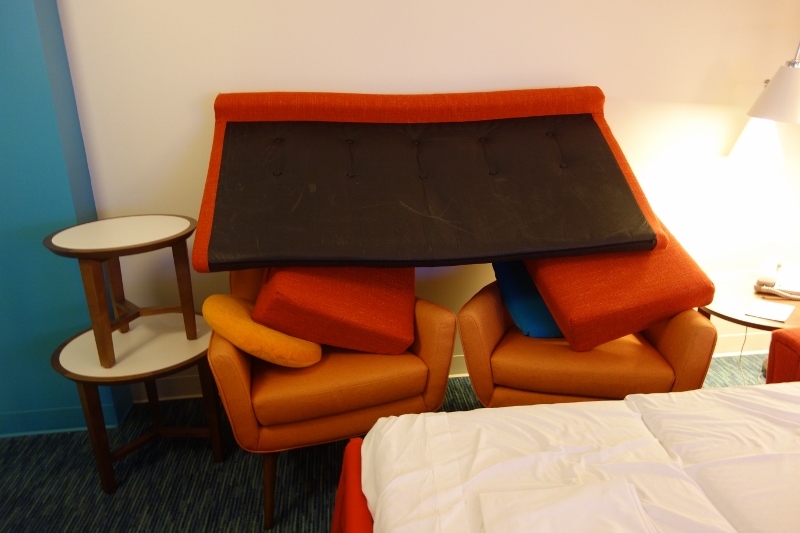 There’s not a lot of places to put these. Depends on whether you want to lose the chairs, or lose the floor of the kitchenette. 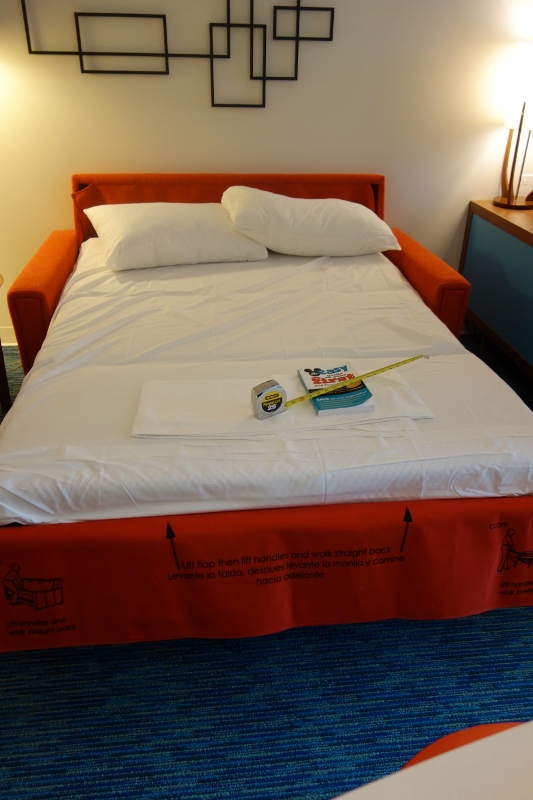 The unfolded bed I measured as about full-sized–53 inches by 75 inches.  The remaining sofa cushion at the head makes it sleep a little shorter than this.  While the sleeping mattress is 4 inches deep, it’s as lousy a cushion as I’ve slept on in a sofa bed for a while.  The problem is not a railed suspension–the suspension is not the issue. Rather, it’s rock hard.  I would not put one adult on this bed–much less two. 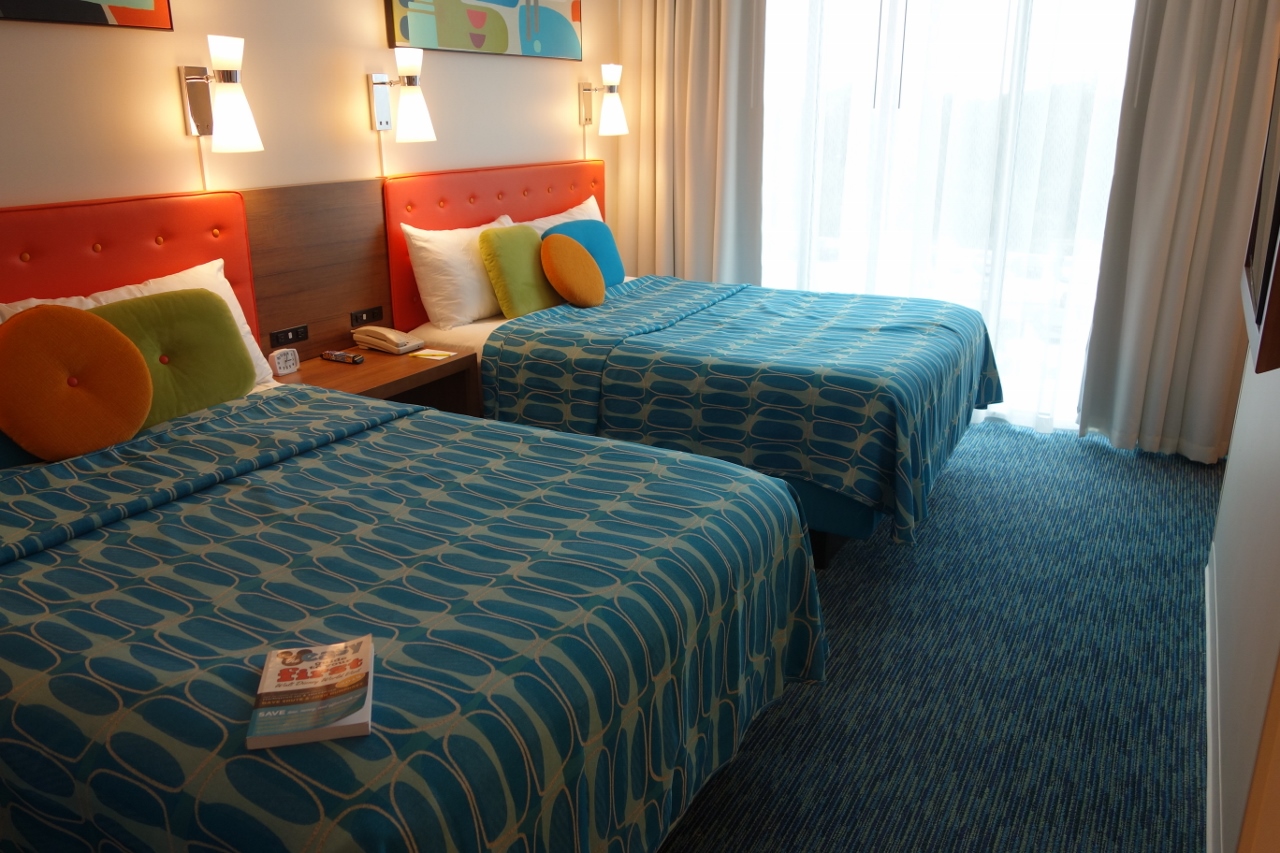 A large sliding door leads to the back bedroom and bath/closet area. 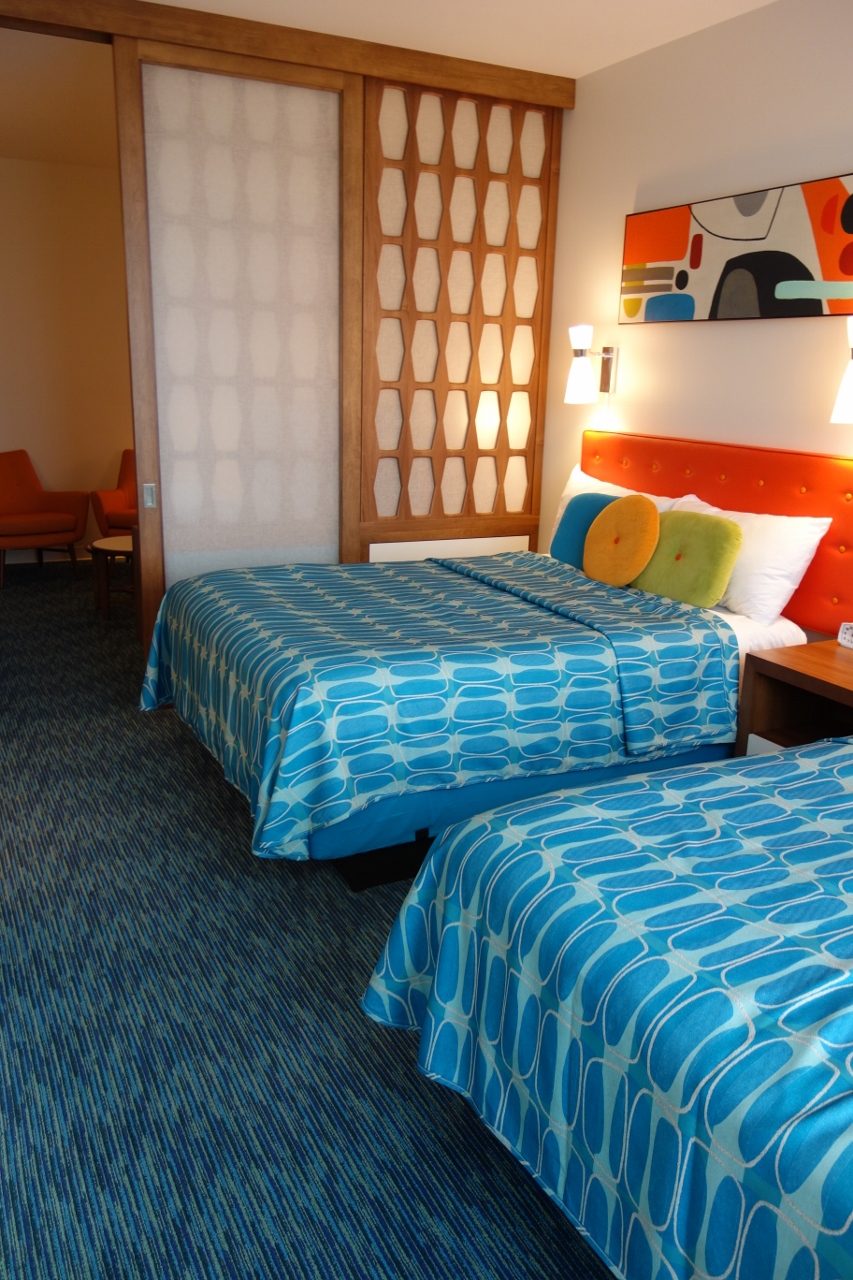 The two queen beds from the other side. 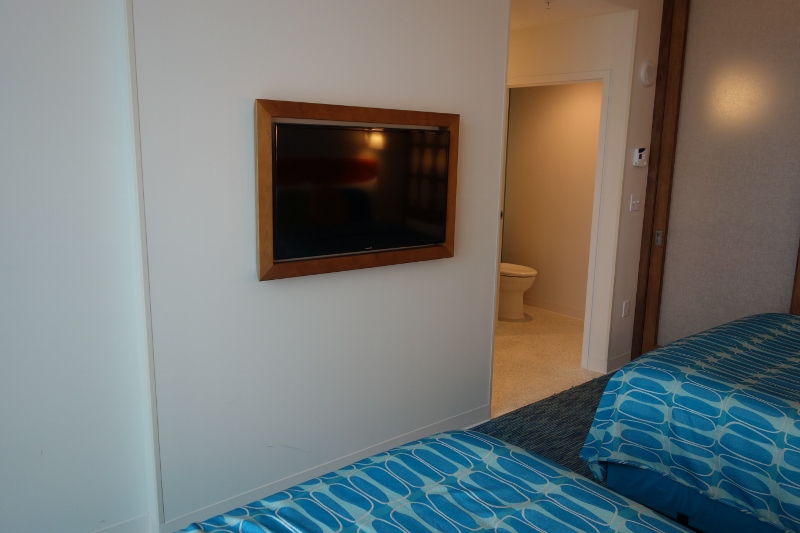 As noted, a couple of feet of width you’d expect to find here occupied by a dresser and a table and chairs or a desk has been shifted to the bath, so you end up with an oddly proportioned narrow bedroom with a TV hanging on the wall. 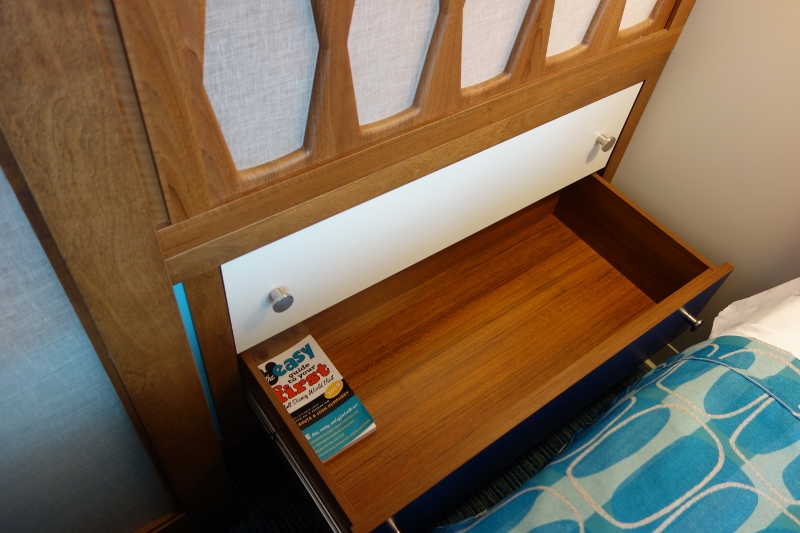 The other two drawers from the cabinetry that divides this space from the front are big enough but hard to access, tight on the side of one of the beds. 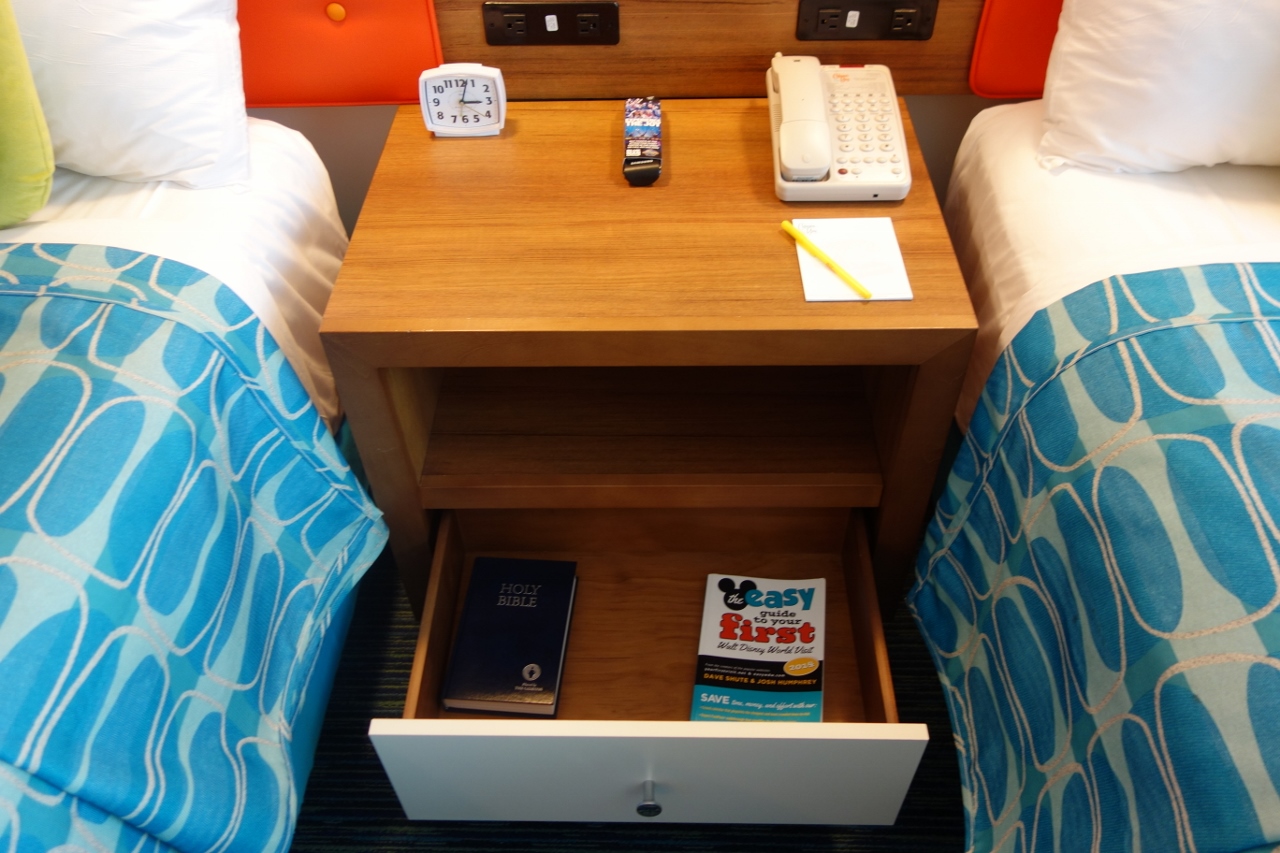 There a little more storage in the table between the beds. 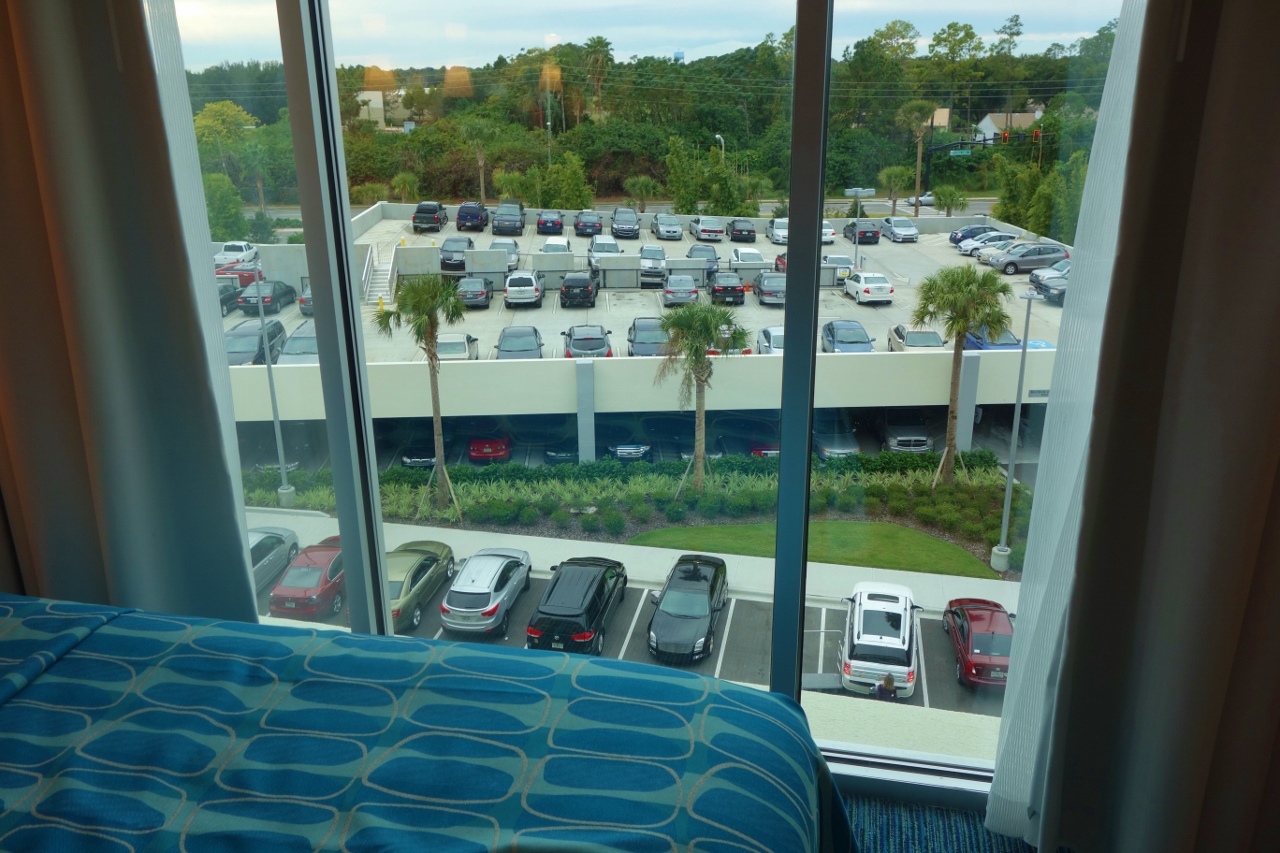 In the Lazy River courtyard rooms, there’s windows at the very back (they are in the living room in the Cabana courtyard rooms).  Here’s my view. Pool views are nicer, more expensive, likely louder. 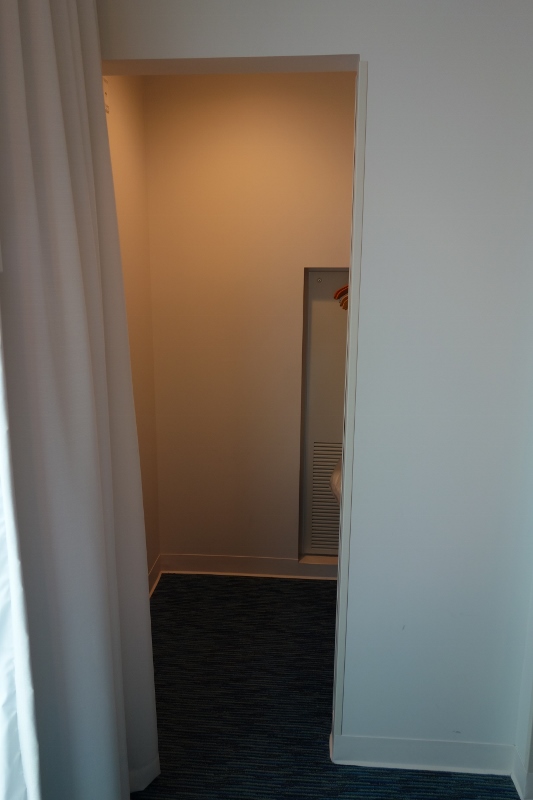 In the back corner is the entrance to a small walk-in closet. 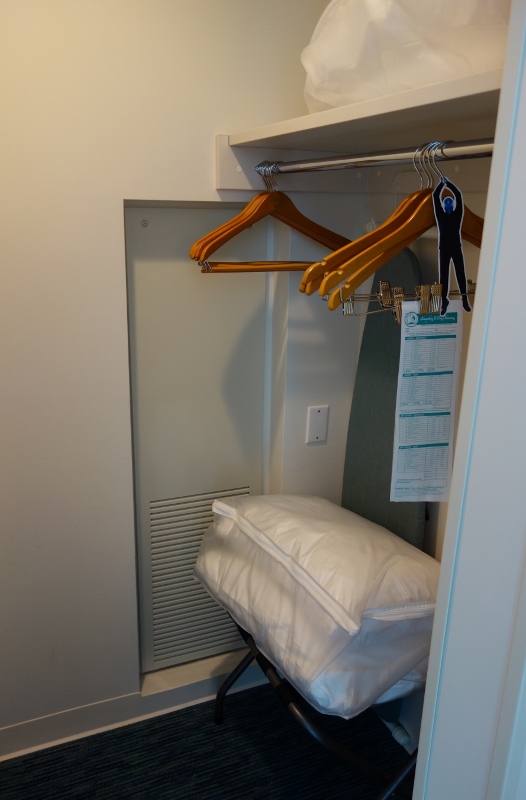 The closet itself.  There’s a famous photo of Josh in one of these closets here. 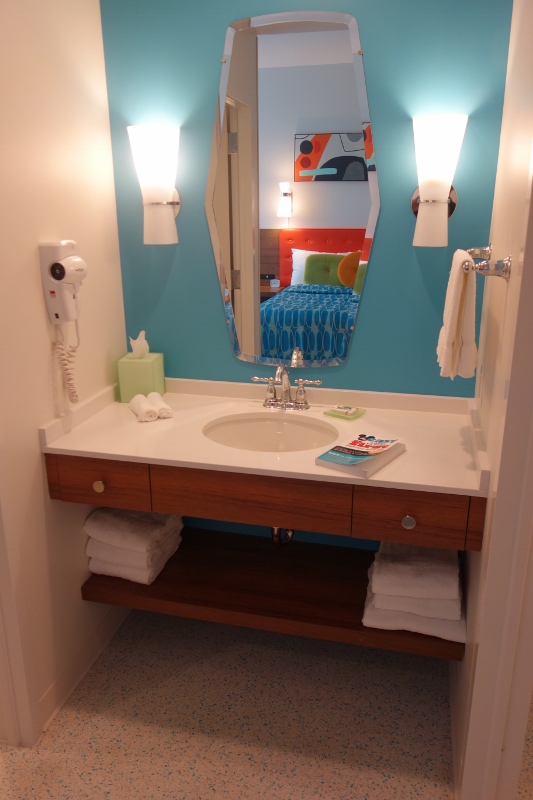 In the middle of this wall the space opens to this sink area–which would be better with a curtain to trap light. 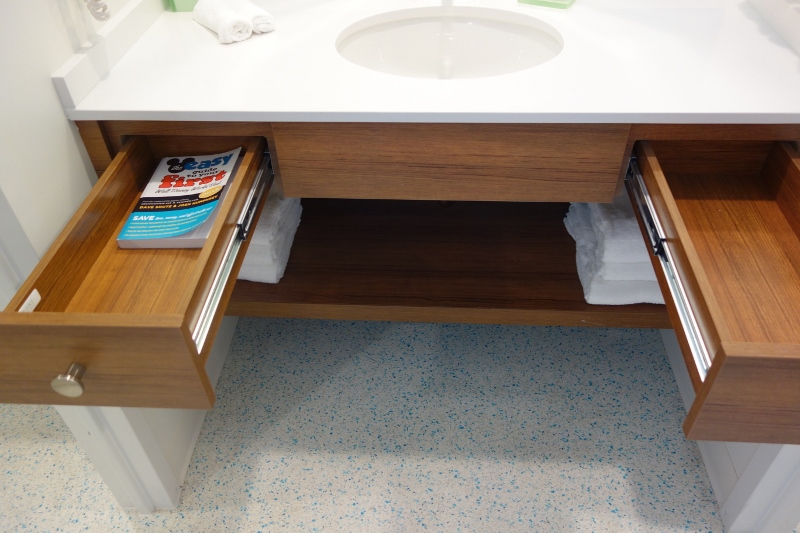 There’s a couple of small drawers. 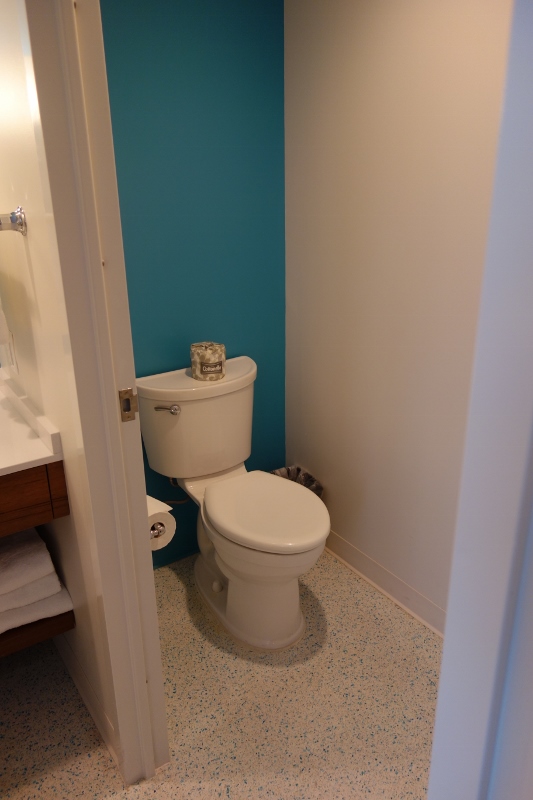 On one side in its own room is a toilet. 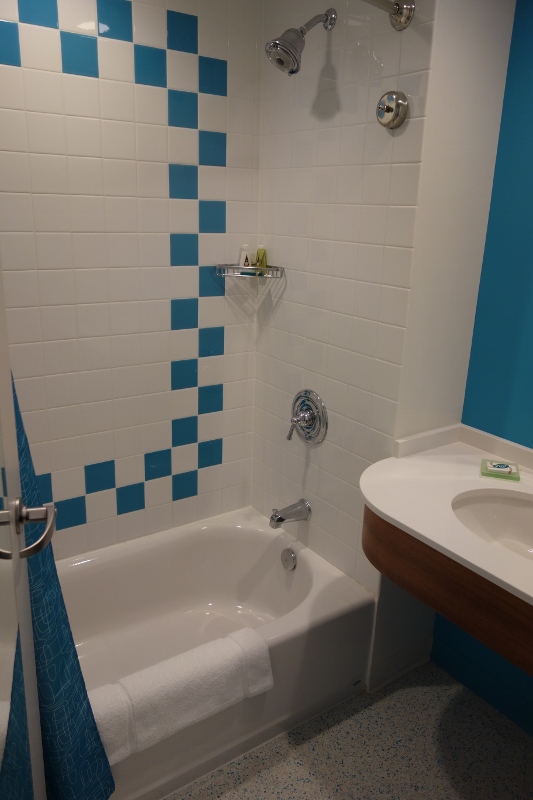 One the other side of the central sink in another room is the tub/shower and another sink.

This is a better layout for six than a simple divided bath.  But the Disney family suite layout of two full baths, with at least one accessible without entering the bedroom space, is much better.

I can’t particularly recommend these family suites. Too many design compromises and not enough space. They need a half bath, and more and more accessible dresser space.  And without a much better cushion on the sofa bed the parents are stuck in the queen room, with just beds–no chairs, no nothing.

Most families that need the extra beds will want two connecting Cabana Bay standard four person queen rooms instead, which give more space, better and more beds, better storage, and another bath, at the cost of the living room seats and the microwave.