However, many families figuring out where to stay at Walt Disney World are concerned not only with the capacity of rooms but also bed sizes, and how beds are distributed among rooms.

This way, Aunt Eileen isn’t forced to sleep in a bunk bed, in the same room as her nephew…unless that’s the plan going in! 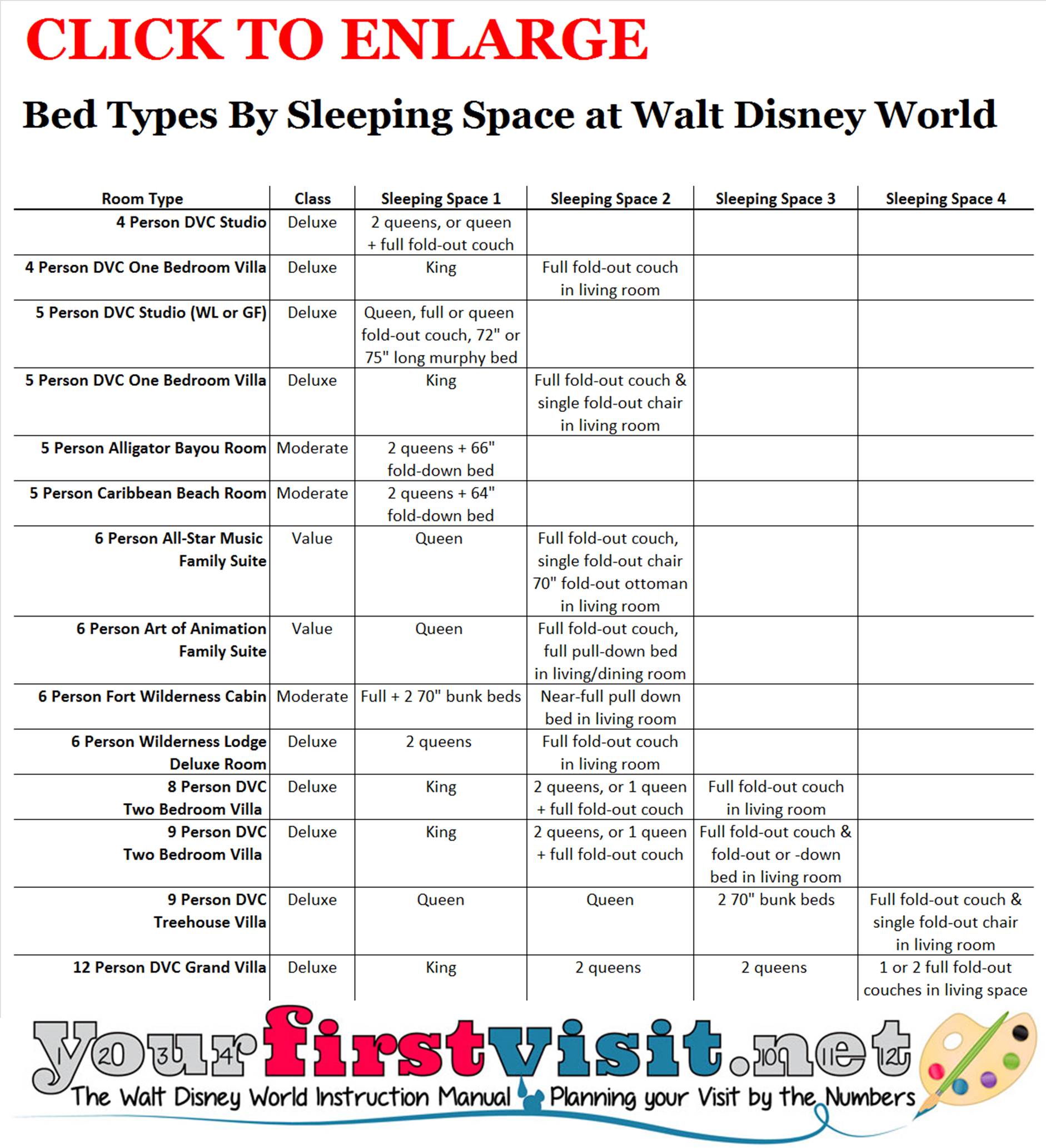 Click the graphic for details on beds and sleeping spaces in the various larger room options at the Walt Disney World Resort. The details include room type, price class, and descriptions of each sleeping area. (“DVC” means Disney Vacation Club Resort–see this for more on the DVC resorts.)

Note that more data about room types–such as baths, kitchens, and square footage–is available in the links for large families above, and reviews with even more can be found from the links on this page.

Example floor plans tied to the details in the graphic are below. 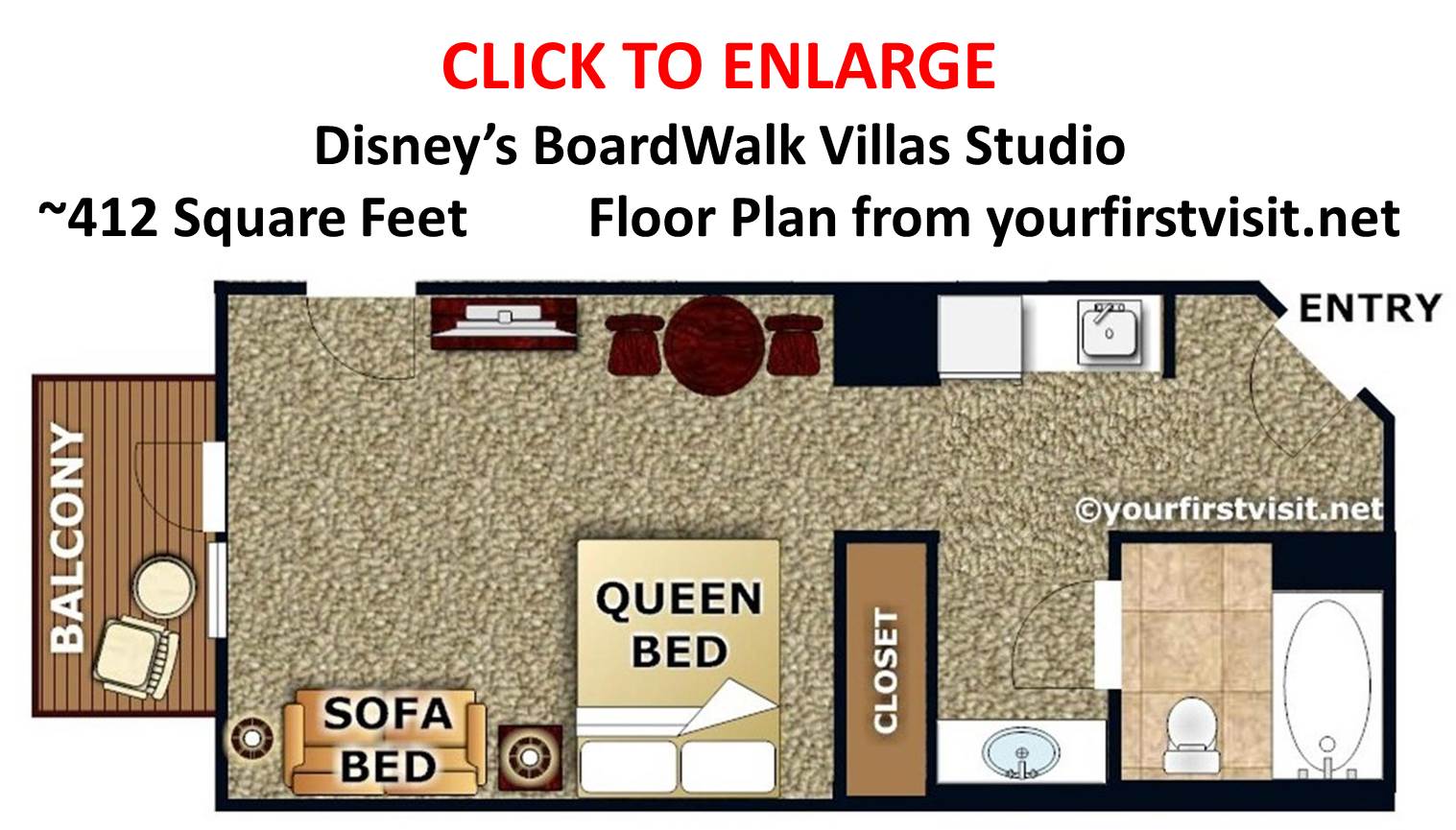 One sleeping area. A queen and a pull-out couch all in one space. Similar Studios are at the Beach Club and Saratoga Springs.   Bay Lake Tower Studios sleep 4 on similar beds in much less space. Four person Studios at Old Key West have two queens, no couch, more space. 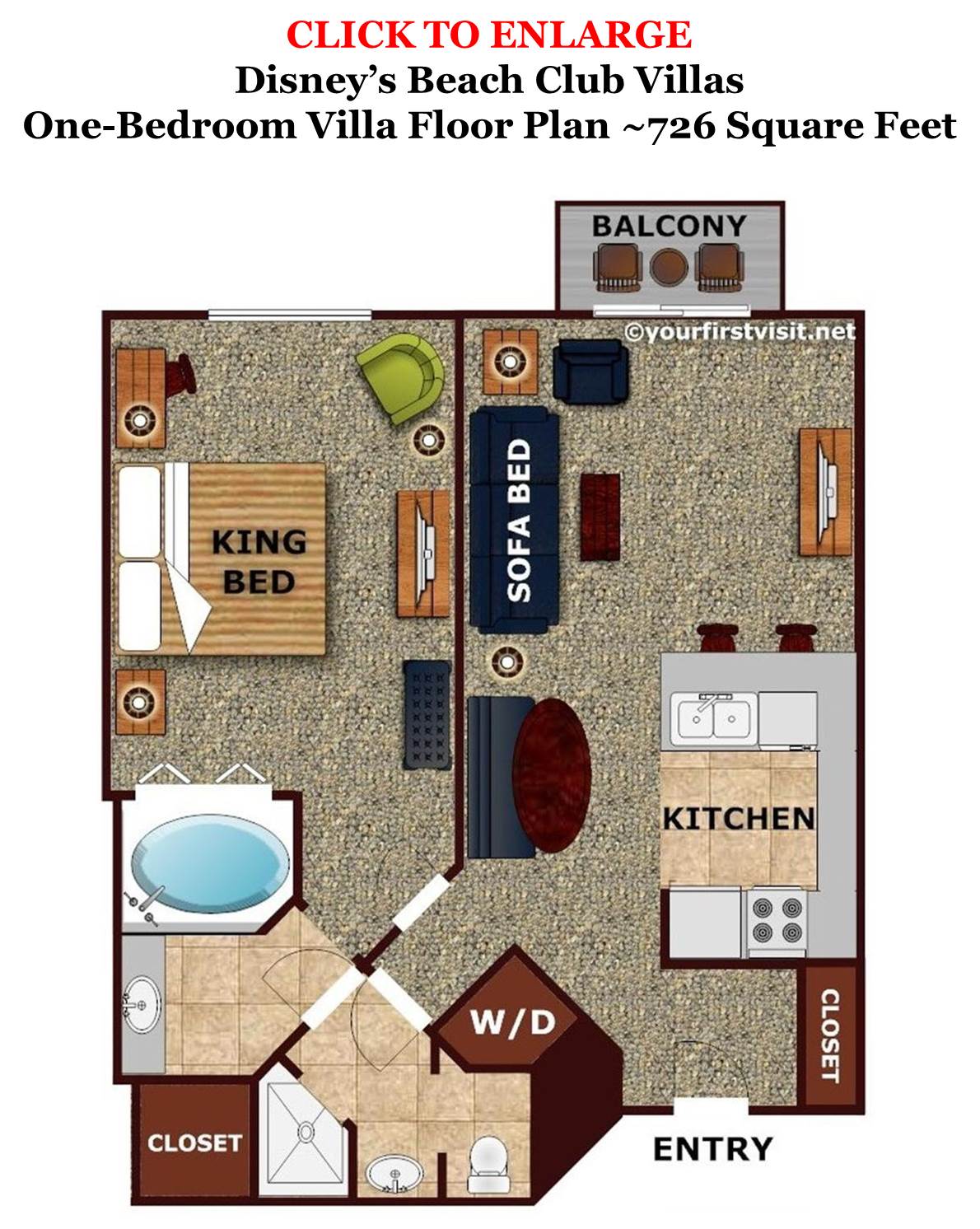 Two sleeping areas. One king in a private bedroom, and a fold-out full couch in a second space, the shared living/dining/kitchen area. Similar spaces are at the BoardWalk Villas, the Villas at the Wilderness Lodge, and Saratoga Springs. 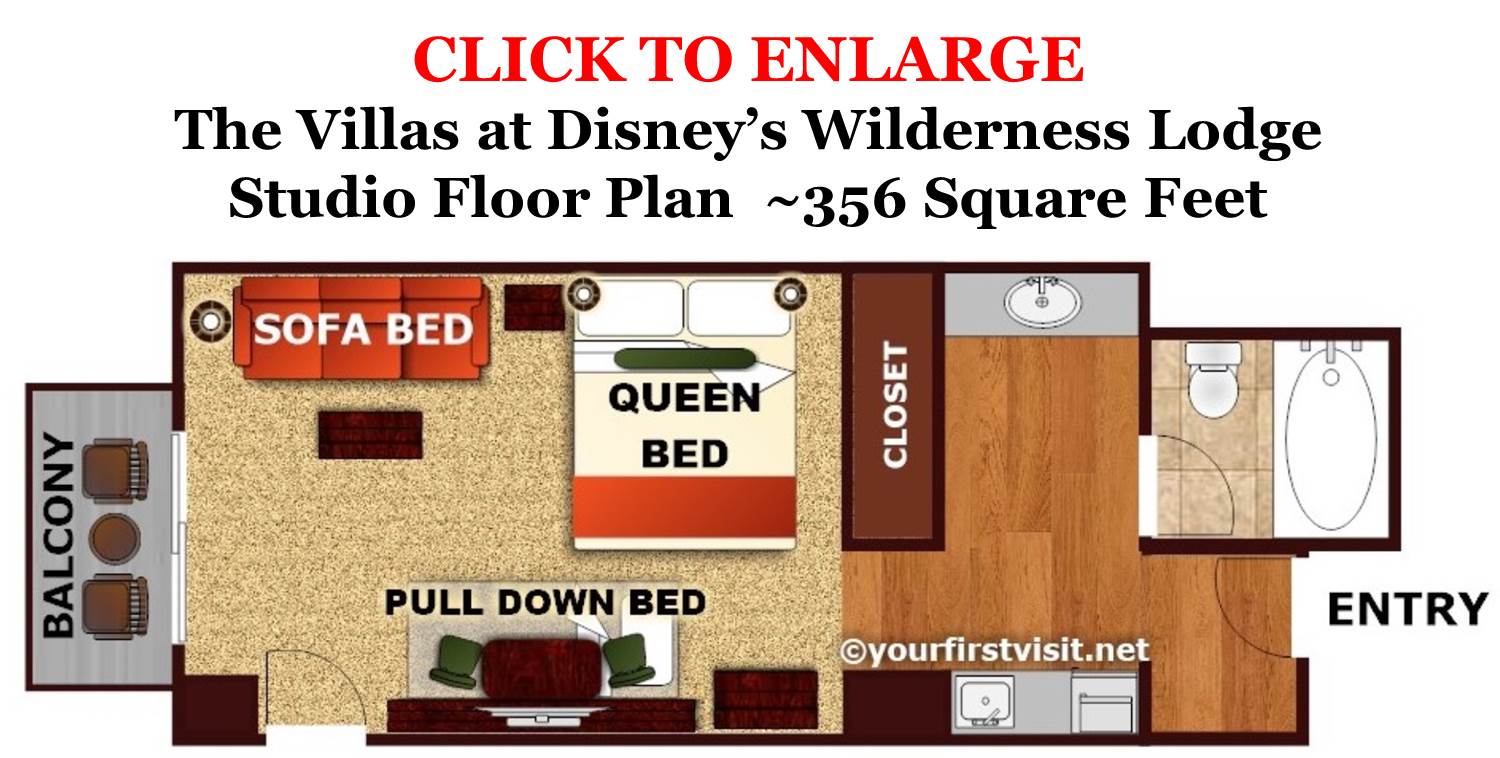 One sleeping area. Queens, pull-out couch, and fold-down bed, all in one space. Similar sleeping arrangements are in the Studios at the Villas at the Grand Floridian. 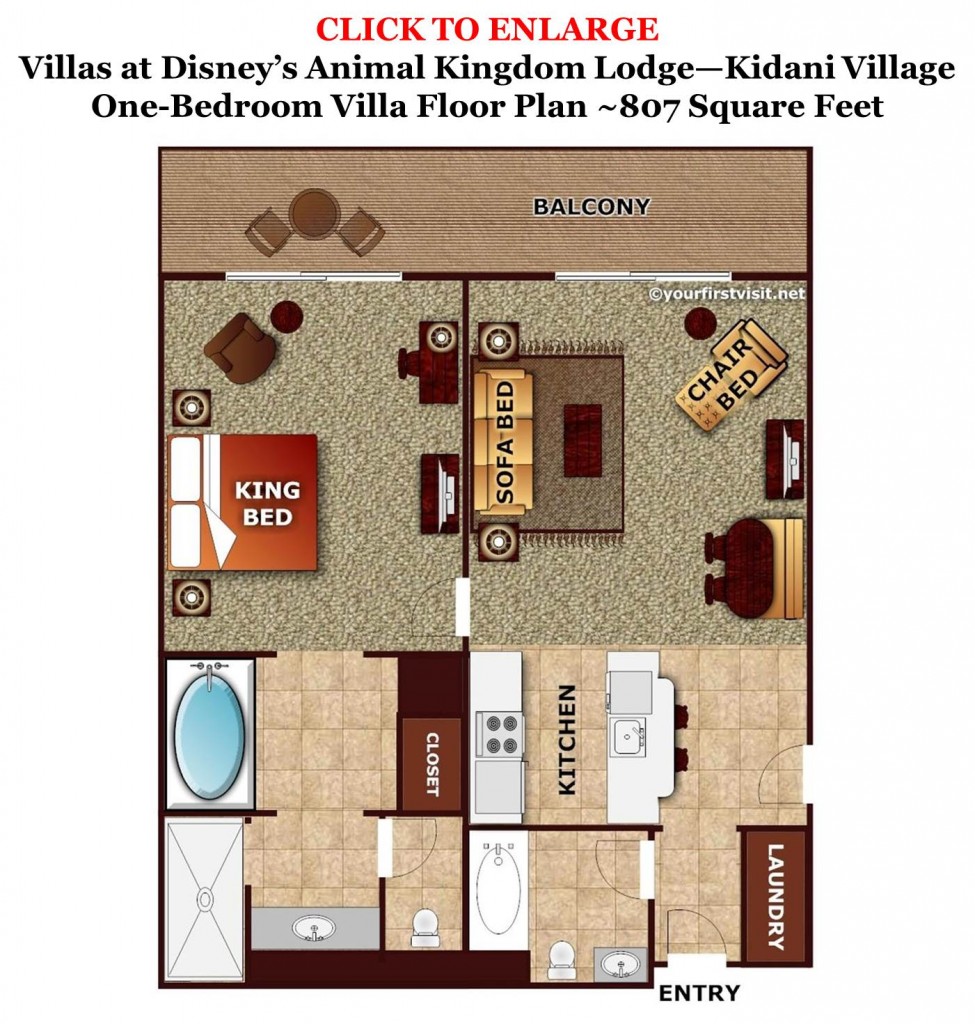 Two sleeping areas. As in 4-person villa above, but also with a fold-out chair added to the shared space. Note also the second bath. 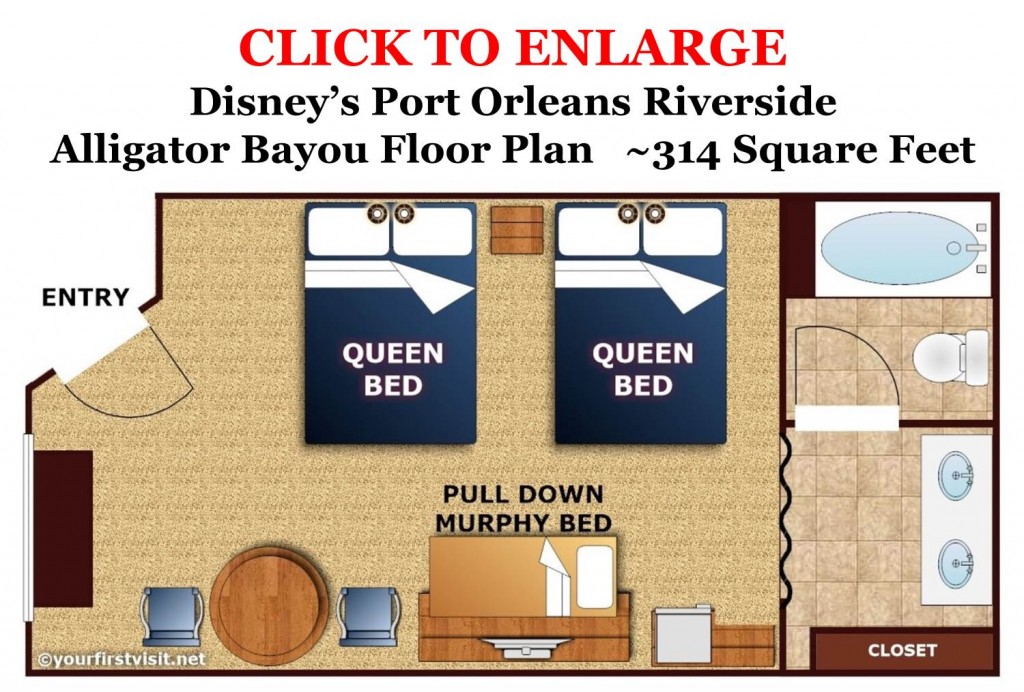 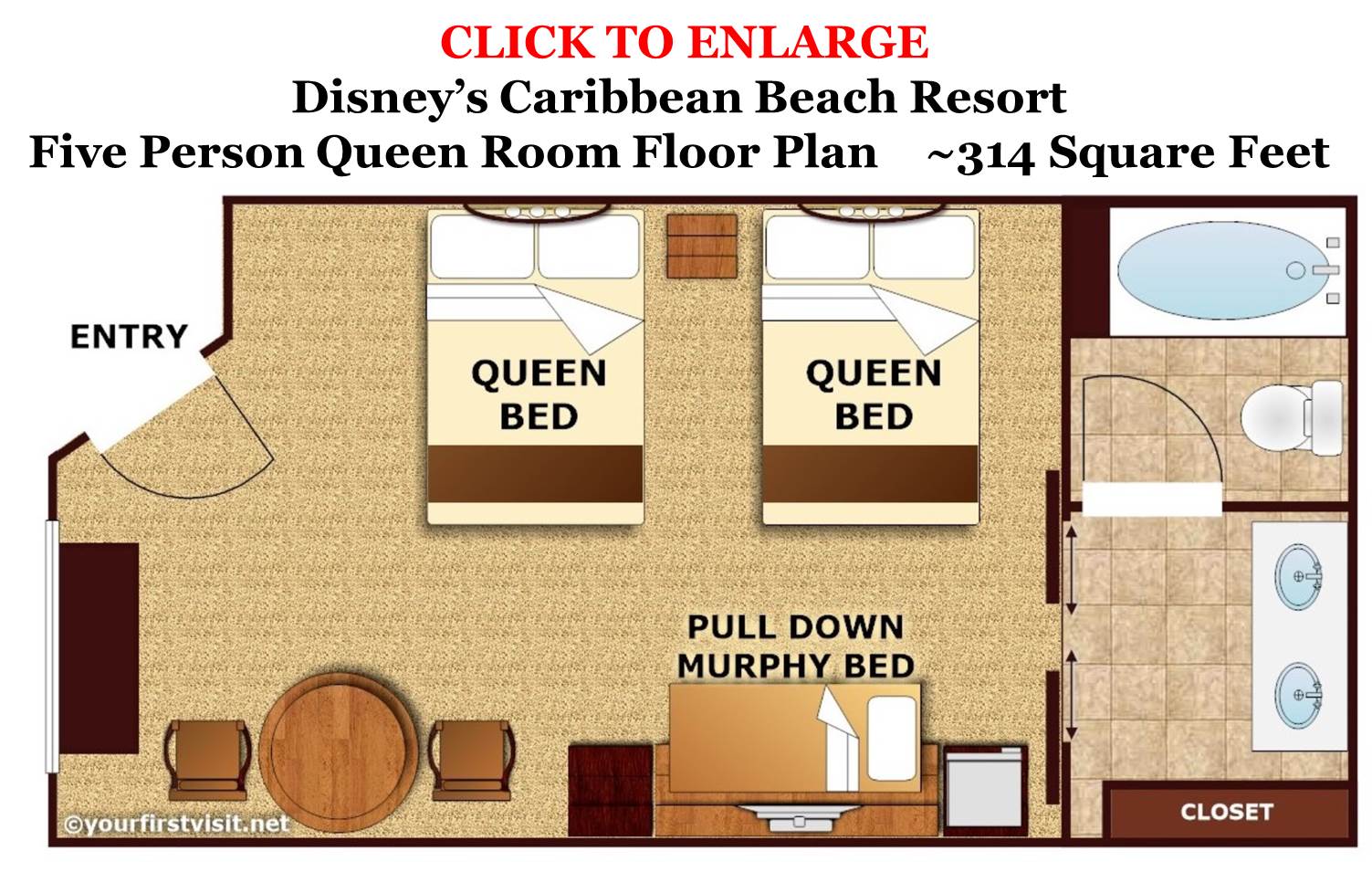 One sleeping area. Two queen beds and one 64″ x 30″ fold-down bed in one space. Expected to be bookable for 5 soon. 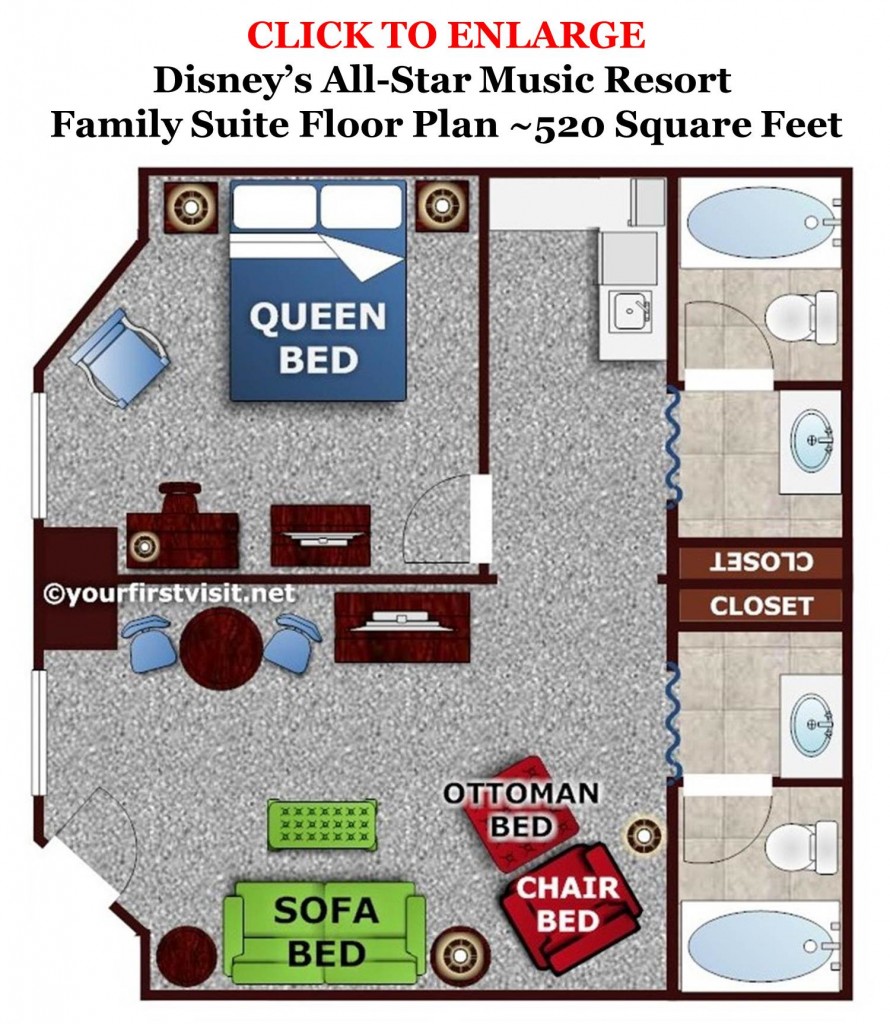 Two sleeping areas. One queen in a private room, one fold-out full couch, one fold out single chair, and one fold-out ottoman in another space. The ottoman bed is uncomfortable for taller or heavier kids. 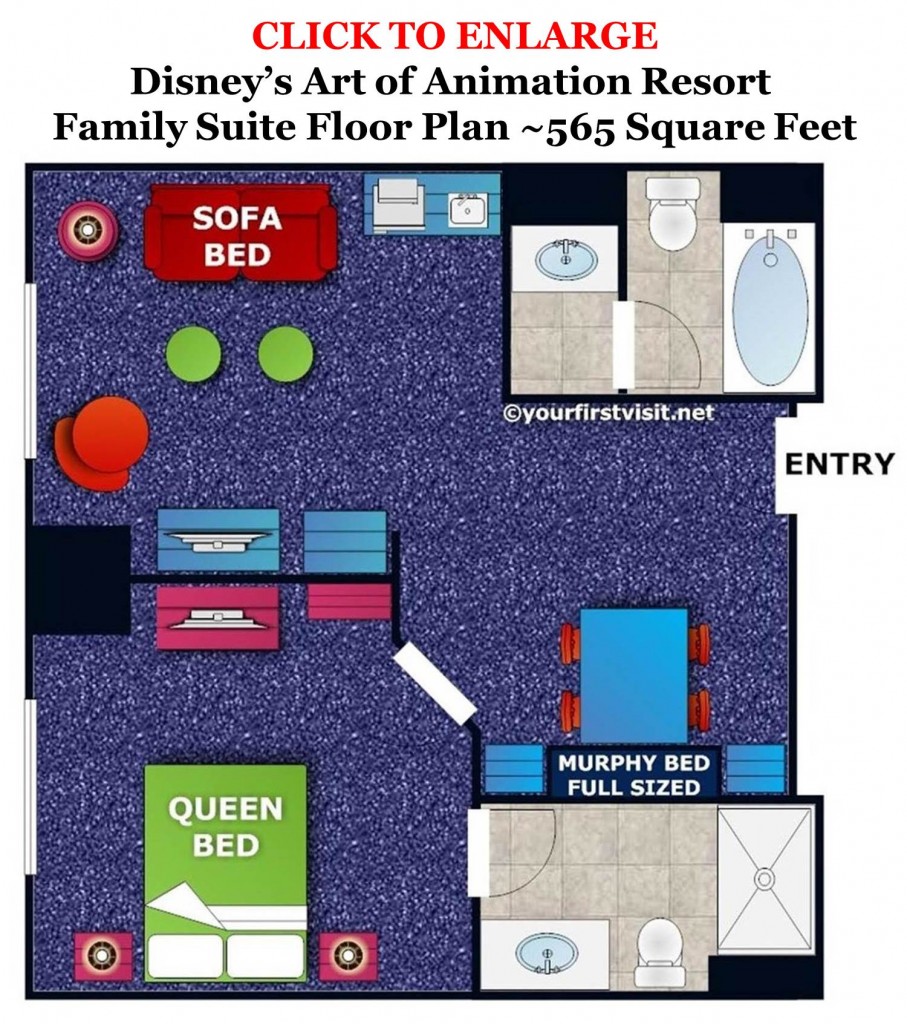 Two sleeping areas. One queen in a private room, one full fold-out couch, and one near full Murphy bed. 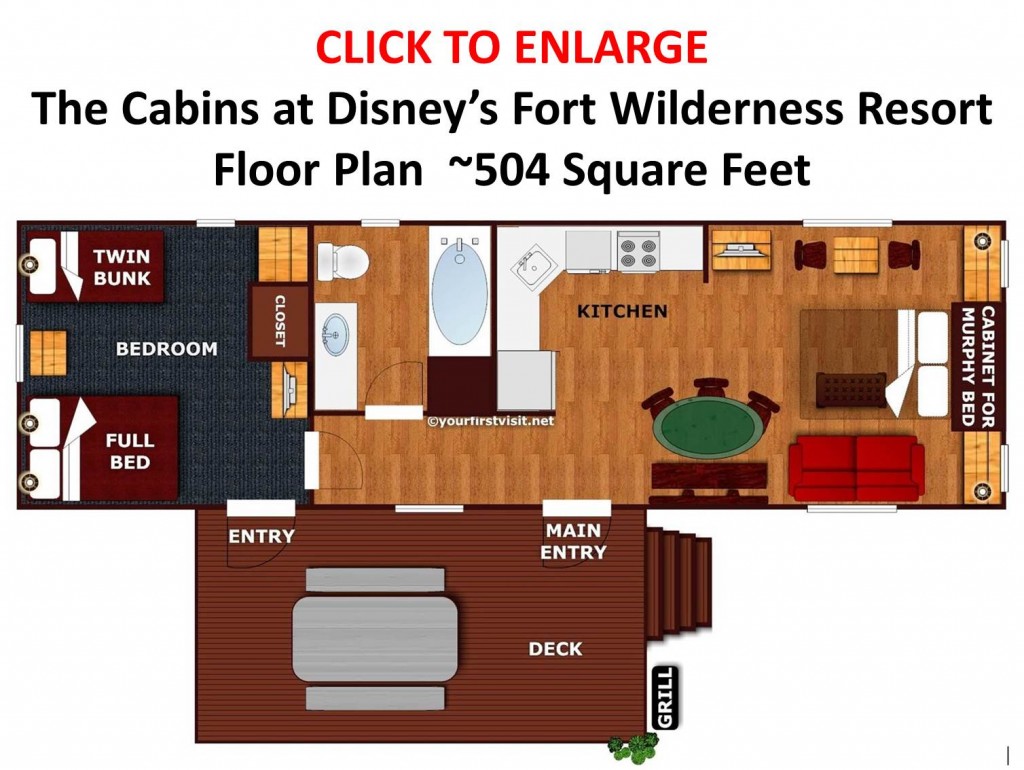 The couch in the shared space is long enough for most kids, and still usable as a bed when the Murphy bed is down, presenting the option of having three people in each of the sleeping spaces.

A few cabins have a pull-out full couch instead of the Murphy bed, eliminating this option. 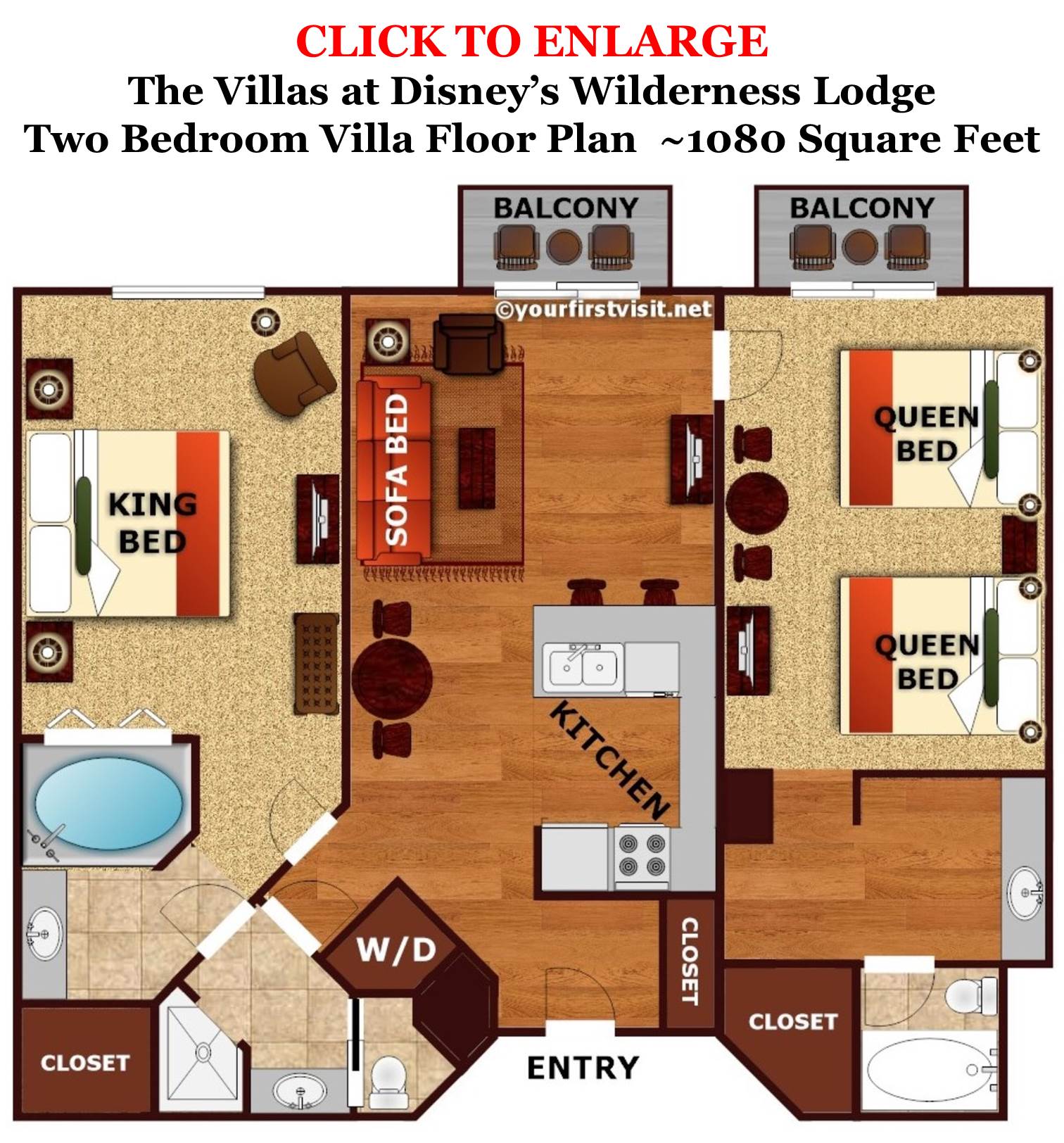 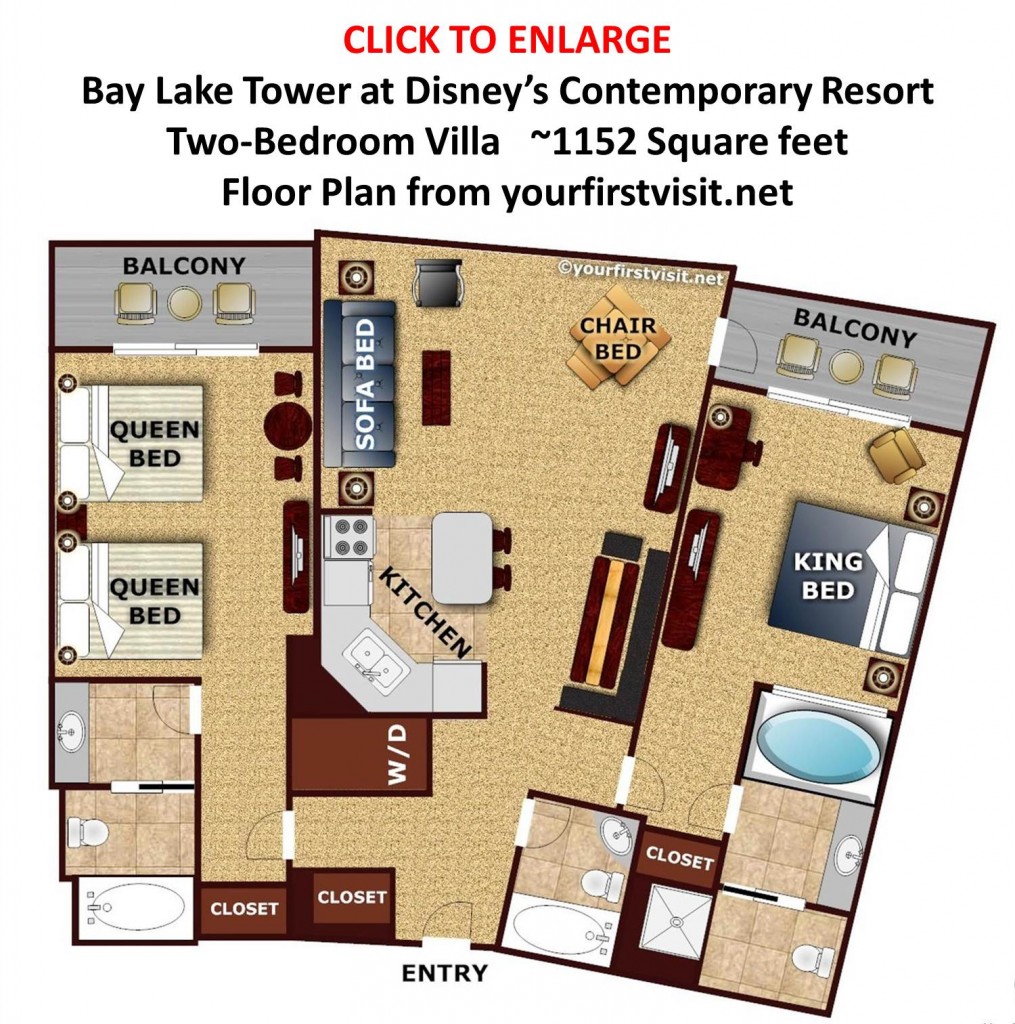 Three sleeping areas: as in Eight Person Two-Bedroom above, but with a fold-out chair added to the shared space. Note also the third bathroom. 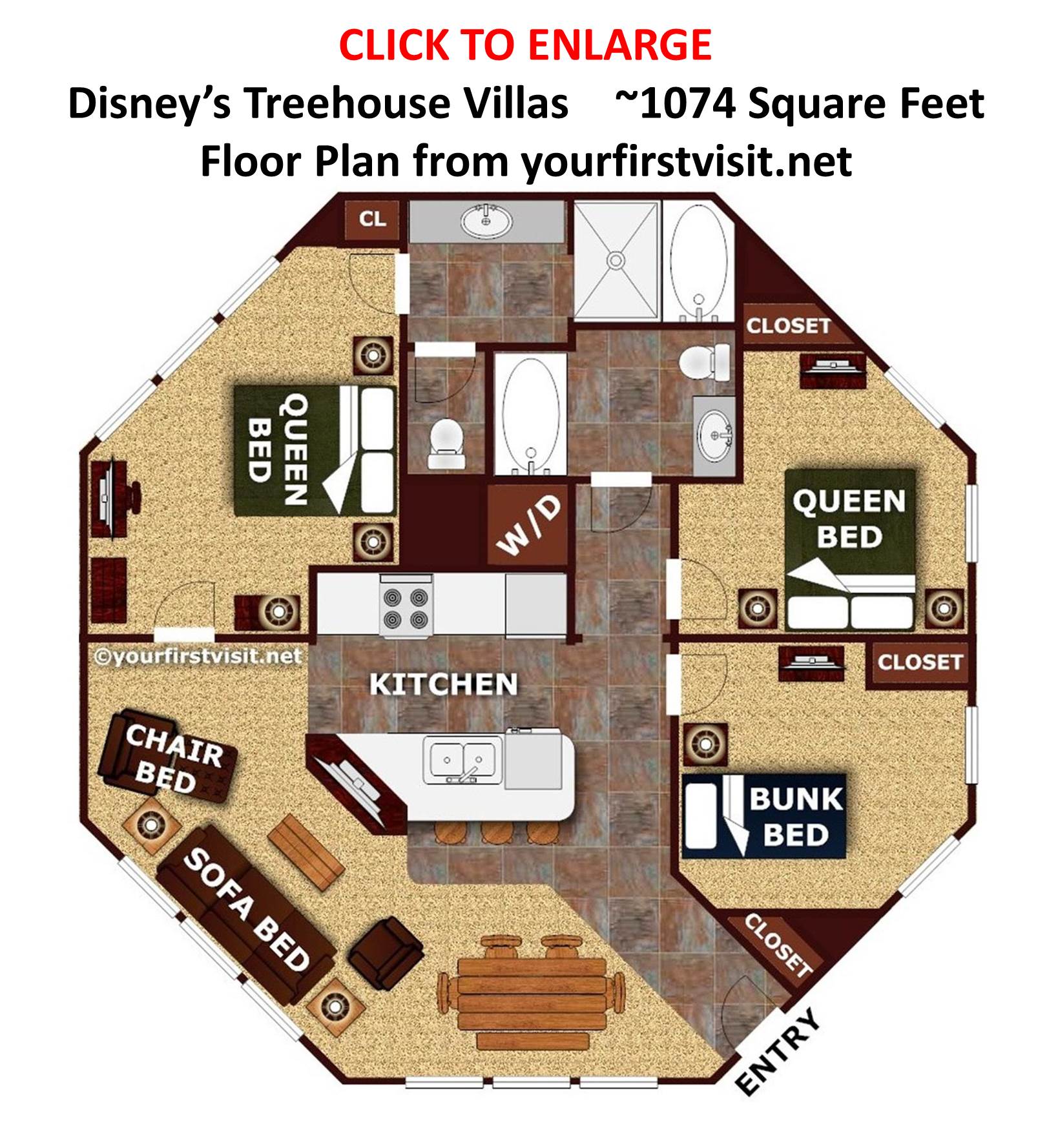 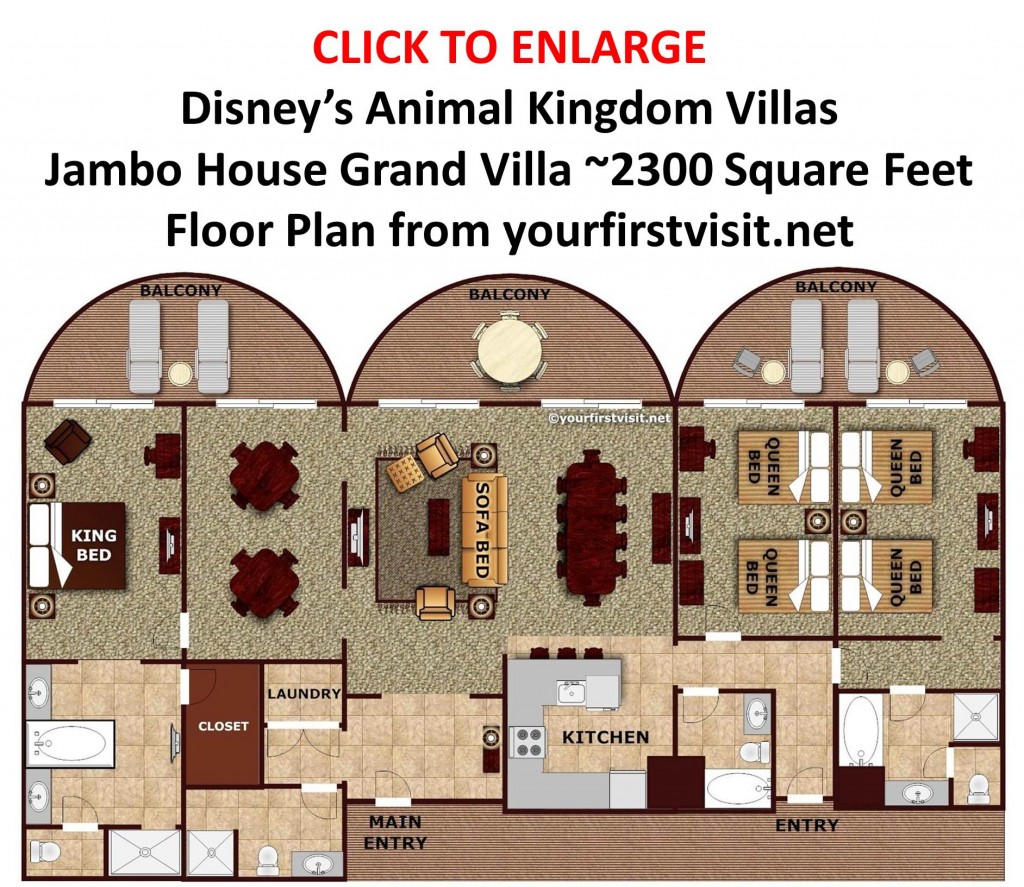 Note that although you can sum to 14 sleeping spots in some Grand Villas, WDW will sell MagicBands, tickets, meal plans, and linens only for up to 12 people. Twelve person Grand Villas of various floor plans are at all the DVC resorts except Wilderness Lodge and the Beach Club.

MORE ON WHERE TO STAY AT DISNEY WORLD