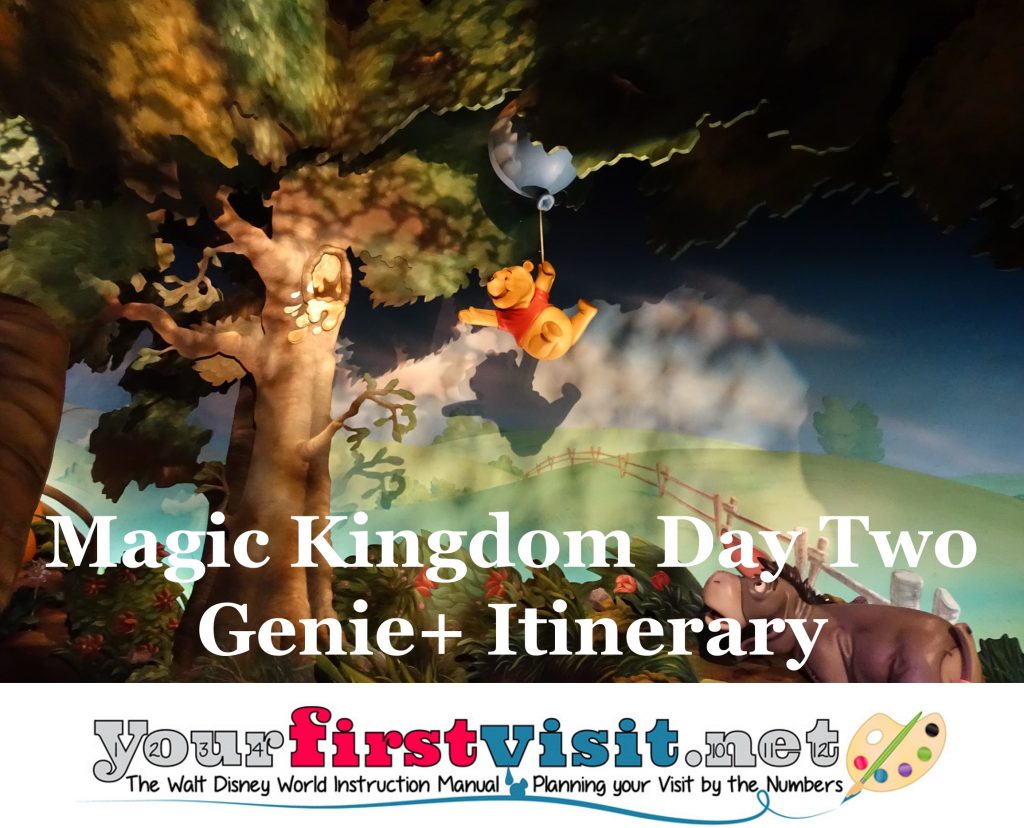 (Note: this is from the Disney World Genie+ Itinerary.)

Your complete your visit to Magic Kingdom today. You don’t need Individual Lightning Lane today unless you wish to re-ride Seven Dwarfs Mine Train, but will be using both Genie+ and Early Entry. Your goal today is to see the attractions in Tomorrowland, Fantasyland, and Liberty Square, to see the afternoon parade Festival of Fantasy, and to complete your visit to Frontierland by seeing Tom Sawyer Island.

Your key Genie+ priorities today are Space Mountain, Haunted Mansion (unless you were able to see it on your first day at Magic Kingdom) and the Festival of Fantasy parade, where Genie will give you a better view with probably less time parked in your spot. Other Genie+ bookings over the course of your day may well save you time so long as they are within a reasonable walk, so look for nearby Genie+ availability as you become eligible for them.

At 7a, book Space Mountain via Genie+.

Be at the tapstiles by at least thirty minutes before Early Entry begins.

Enter the park, make your way to Peter Pan’s Flight, and ride.

Go to The Many Adventures of Winnie the Pooh and ride it.

Make your way swiftly into Tomorrowland and check the standby wait for Space Mountain. If things have gone smoothly so far, this wait should be short. If waits are short, ride it, and afterwards, if it is Genie+, decide whether to keep your Genie+ or cancel it and replace it with another ride. If you do replace it, your priority is Haunted Mansion—or Festival of Fantasy, if you saw Haunted Mansion on Day 1.

You should be close to eligibility for more Genie+ eligibility now or during the above. When you are eligible, prioritize Haunted Mansion or Festival of Fantasy on the conditions noted above.

In Fantasyland, see Mad Tea Party, Dumbo the Flying Elephant, The Barnstormer, Under the Sea ~ Journey of The Little Mermaid, Enchanted Tales with Belle (if it is open by your trip), Prince Charming Regal Carrousel, Mickey’s PhilharMagic, and “it’s a small world.”

Doing them in roughly this order will minimize walking, but lunch, your Genie+ at Haunted Mansion, and possibly other Genie+ may re-route you.

What happens next depends on what time it is, when the afternoon parade is scheduled on your visit (this itinerary assumes a 3p parade is showing), and when the last boats go to Tom Sawyer Island.

By this point you should be into early or mid-afternoon. If it’s mid-afternoon, if you do not have Genie+ for Festival of Fantasy, grab a viewing area near the part of the parade route in Frontierland by half an hour before the parade is scheduled to begin. If you do have Genie+, arrive in the Genie+ viewing area a few minutes before the parade is scheduled to begin. Then do Tom Sawyer Island, and see the attractions in Liberty Square (see next para) after that.

And you are almost done! The one remaining attraction is the Walt Disney World Railroad, which as I write this has yet to re-open. If it is open during your trip, grab it from either the Frontierland or Main Street Station (whichever is closer) and ride it to the Main Street station, circling most or all of the park.

You will complete your visit to Disney’s Hollywood Studios, with an early start.