Walt Disney World’s suite of attractions and hotels has largely re-opened, with only one significant attraction yet to re-open–Fantasmic at Disney’s Hollywood Studios. Fantasmic is expected to open this summer.

Given that, I think it’s fine for first-timers who may never return to plan a visit to Walt Disney World in 2022, with the best time to visit being after Fantasmic has re-opened, but a great visit before then quite possible. 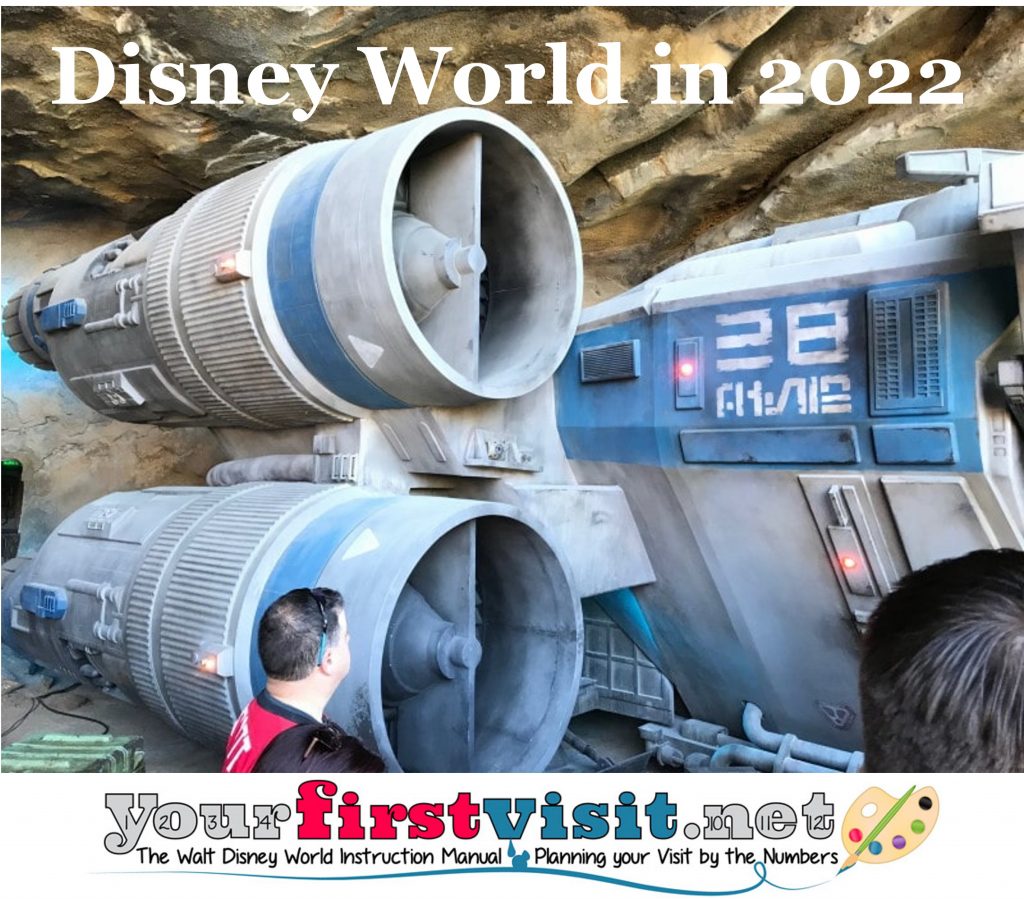 The implications of Disney’s new admissions and new wait management systems on the best ways to visit the parks are still in flux.  The value of the extra-cost components of some of these (Genie+ and the a la carte ILL rides with reservations available for individual purchases, all covered here) is in particular still up in the air.

Moreover, Early Entry is a very helpful perks for those staying at an eligible hotel pretty much anytime, and especially on busier days

I’ve just published an itinerary that takes advantage of all these new tools.  It only works for those staying in hotels eligible for both Early Entry and 7a ILL purchases.

Of more long-term interest, Disney World is shifting from a strategy designed to extract a higher proportion of the total vacation spend of an ever-increasing guest count to a strategy that uses higher prices to yield a better overall experience for a smaller number of guests.

The merits of the new strategy, and the specifics of getting from one to the other, are wildly controversial in some quarters, and in addition operationally fraught, because the incentives don’t align. I’ll have more to say about much of this, I imagine, later.

Disney World uses a combination of complicated and changing room pricing, and, on top of that, deals, to keep its resort hotel occupancy very high. Typically, rooms are more expensive—sometimes much more—during the more attractive times to go to Disney World.

Mousesavers.com has specific material on nightly prices in 2022 by hotel and within them room types here, and I have easier to use but much less detailed information on 2022 Disney World resort hotel seasonal prices here.

While pre-pandemic deals were technically available for most times of the year (you’ll find any current Disney World deals here), the number and types of rooms available became more and more restrictive over the years leading up to the pandemic.

Post-pandemic, Disney is dealing with both high demand and with continuing resort hotel capacity issues. As a result of these supply and demand issues, I don’t expect to see a lot of capacity made available for deals in 2022.

The simplest way to handle getting any deals that might be available is to make your initial booking through a travel agent, who will then–if a deal comes out for your dates–move heaven and earth to try to get you in to it.

I recommend Destinations in Florida, who has been the travel agent partner of this site for years. To book your vacation through them, contact them using the form at the end of this page.

The major question for 2022 crowds at Disney World is the balance between Disney’s practical capacity, affected by staffing, its offered capacity though its theme park reservation system, and the effectiveness and usage of the new tools Disney World is offering that might let one avoid crowds, such as its paid line-skipping offerings and its daily early entry options for guests in eligible hotels. While I could–and probably will–say a lot more about these, frankly there is not enough experience yet, especially with the  paid line-skipping offerings, to make sensible judgments.

On the premise that whatever effect all these have, they will somewhat work over the course of the 2022, I offer the following observations:

Early January 2022 will be busy through the first weekend, but better after then, with the Martin Luther King holiday weekend being the next worst dates in the month.

Presidents Day, February 21 in 2022, is as late as it can possibly be. The week that includes Presidents Day will be bad as usual. (Tons of kids in the northeast have the whole week off.) Crowds for this holiday week actually begin the Thursday before. For some reason, the weekend before President’s Day–through Monday February 14th–is blocked out in the least expensive of Disney’s newest Annual Passes. I can speculate about this, but honestly don’t know why the weekend of the 12th is blocked off.  Until more specifics emerge, I’d avoid that weekend as well.

Mardi Gras in 2022 is March 1.  A few southern school districts have it off as a single or multi-day holiday. The impact of Mardi Gras-related visitors on Disney World is overrated, so don’t worry about it. (People mix up the effects from it and the effects of President’s day breaks–many years have seen the week of Mardi Gras also influenced by crowds from President’s Day breaks, which does not happen in 2022.)

Easter in 2022 will be late in its possible range, on April 18. The patterns of spring breaks in 2022 lead me to be forecasting heavy spring break crowds March 12 through April 24.

Summer 2022 crowds I expect to be substantially higher than the crowds in the years before COVID, as people continue to make up for missed holidays in 2020 and 2021, and overseas visitors come fully back to Disney World. I expect the new Guardians of the Galaxy ride at Epcot, Cosmic Rewind, to be a major draw as well.  The current opening date for Cosmic Rewind is “Summer 2022.”

Thanksgiving, November 24, 2022, is in the middle of its possible range, yielding good weeks both the two weeks before and the two weeks after.

Christmas is on a Sunday in 2022.  That that some all schools that take two weeks off for Christmas will begin their breaks on Saturday December 17, 2022, and be off through Sunday January 1, 2023 or Monday January 2, and other two-week-break schools will be off December 23 or 24 through January 8. Schools with shorter breaks will largely be out Friday December 23 or Saturday the 24th through January 1 or 2. As a result, the period from Christmas Eve through January 1, 2023 will be especially crazy, but things will also be bad the weeks before and after.

See the links for more on 2022 at Walt Disney World:

My friends at Destinations in Florida, the long-time travel agent partner of this site, can book your vacation for you.  Contact them using the form below.

previous post Fridays with Jim Korkis: Disney by the Numbers
next post Next Week (January 8 through January 16, 2022) at Walt Disney World