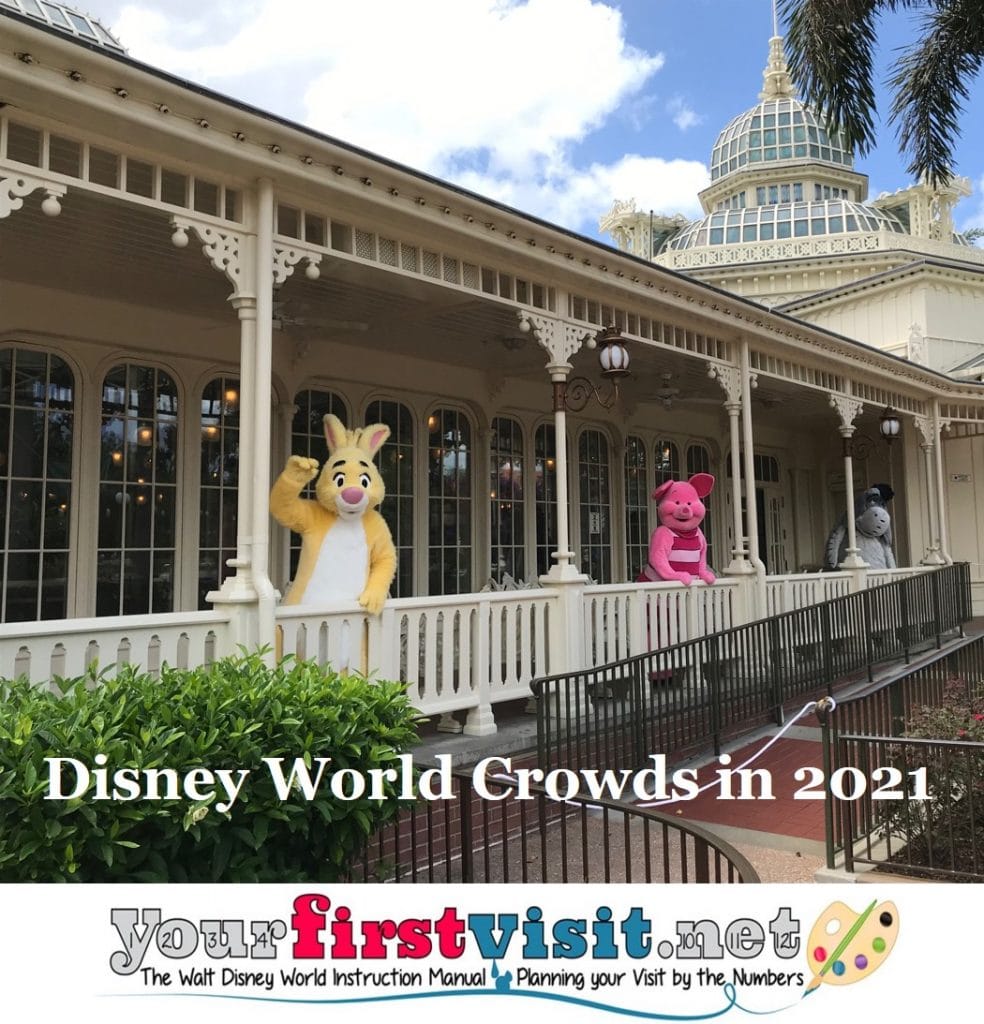 The chart lower on the page shows my current draft forecasts for 2021 crowds by week at Walt Disney World. I explain how I built it at the end of the post.

2021 will be an interesting year at Disney World, with COVID-related capacity restrictions dominating crowds early in the year, but after that new attractions opening, old attractions re-opening, and Disney World beginning its 50th anniversary celebration later in the year.

Dates in the Disney World Crowd Calendar are the beginning of the week, and the forecast covers my recommended Saturday-Sunday 9 day stays from that beginning.

HOW TO INTERPRET THE 2021 DISNEY WORLD DRAFT CROWD CALENDAR

As is the case in almost every good Disney World crowd calendar, the forecasts are about wait times for rides–not about how crowded the areas outside the rides might be.

The “moderate crowd” weeks–those in black and rated 5-7–have crowd levels I would not particularly recommend to first time visitors, though the crowds can be managed with good plans. However, I’d go during such weeks myself with no hesitation, and think these levels are totally OK for returning visitors who don’t need to see everything and already know how to work Walt Disney World.

BUILDING A DISNEY WORLD CROWD CALENDAR IN A COVID YEAR

Right now, Disney has COVID-related limits on its supply of park capacity, which come from the interaction of what attractions are open, what their individual capacities are, and how much physically-distant waiting space is available for each. To make sure that these limits are unlikely to be exceeded, it also has a new system that requires not only a ticket but also a park reservation for entry. The FastPass+ system has also been taken offline, so almost all waits except for Rise of the Resistance are first-come, first served, and no ride capacity is reserved for FastPass+.

The upshot is that COVID crowds are capped to lower in-line waits than they have ever been in the past. Absolute waits may not be that delightful, but especially on holidays weekends they are better than standby waits were before COVID.

As a result my COVID-based Disney World crowd calendar has only three possible levels: 4—low plus, 6—moderate, and 8—high minus.

While Disney World’s 50th anniversary celebration will likely be lesser than it was hoping for before COVID, in my “normal” Disney World crowd calendar I do still expect it to be a major draw October 1, 2021 and later, and to suppress crowds in August and September—as folks put off their holidays until the 50th.

My “normal” Disney World crowd calendar has week rankings everywhere from 1—lowest of the year to 11—highest.

I then weighted the contributions of each of these two calendars to craft the integrated draft crowd calendar I present. The “normal” calendar has no weighting at all until mid-February, then over the course of the year I slowly increase its contribution until it makes up 90% of the final crowd calendar beginning Thanksgiving week.

I label the final result a draft, as my judgment of the contribution of COVID-related factors to crowds is subject to change depending on how things go. Moreover, the actual 50th anniversary celebration may see different dates, or more or less offered as part of it thus drawing different numbers of people than I currently expect, or both.