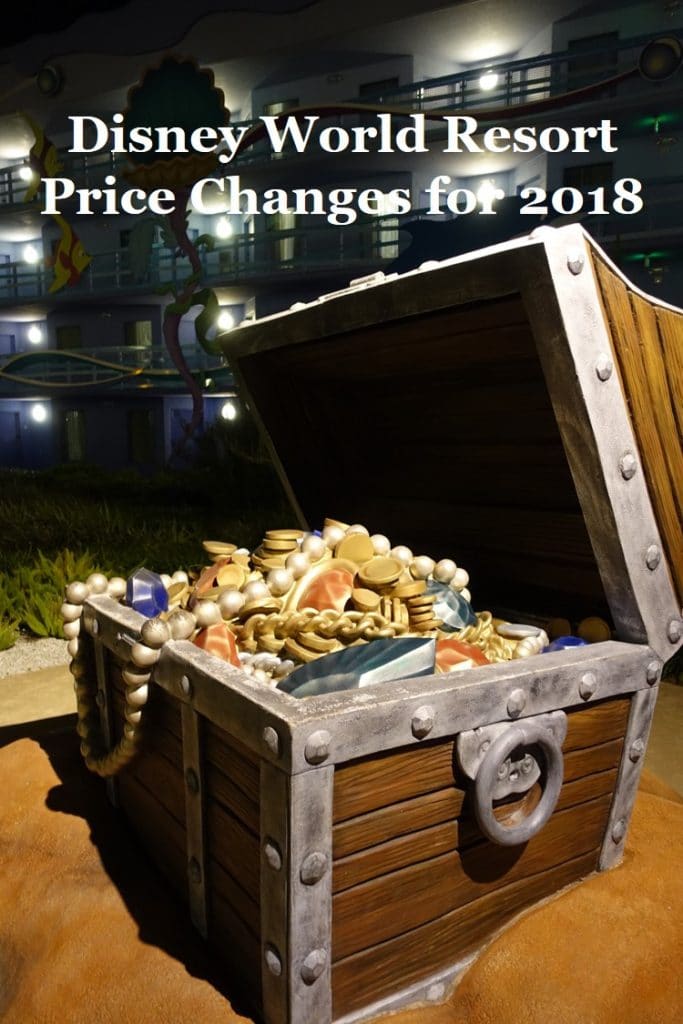 You can book them by contacting Kelly B at KellyB@DestinationsInFlorida.com or 980-429-4499. 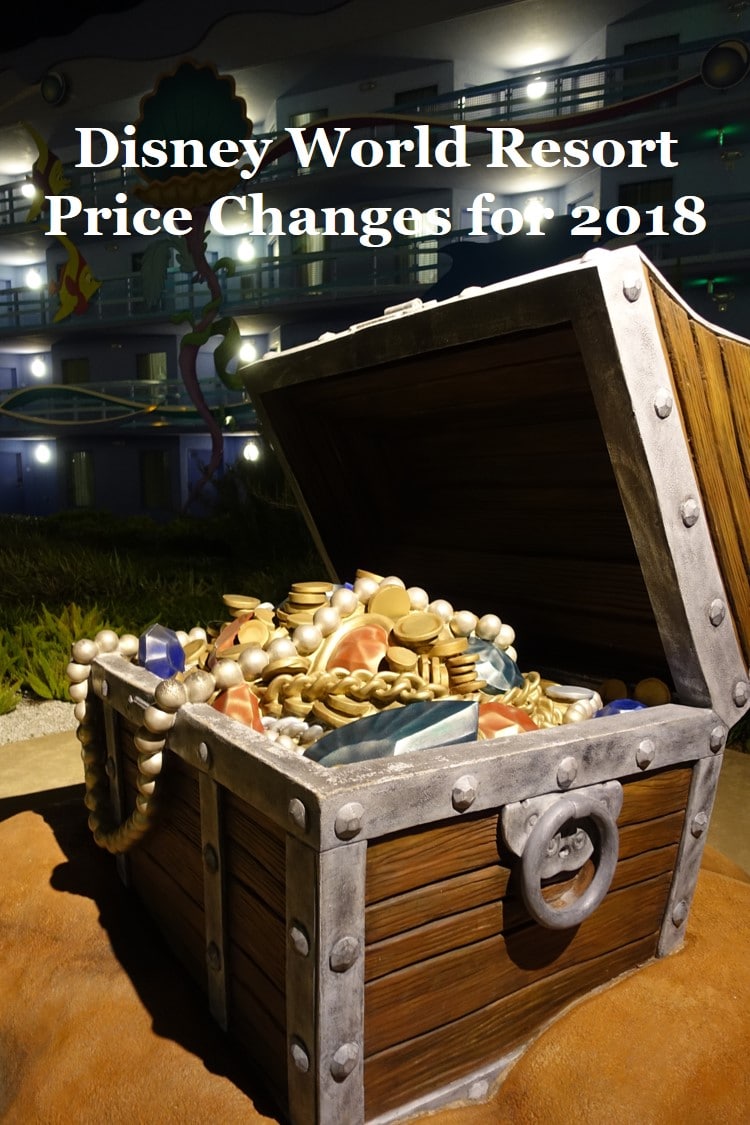 The prices that came out June 20 were a bit of a mess, particularly for January 2018, and have changed several times since–see the Art of Animation example (click it to enlarge it):

They seem to have stabilized, however, so I’ve been analyzing a sample of resorts, and the upshot is that compared to the quite restrained price increases we saw in 2017, prices are up substantially in most–though not all–resorts in 2018.

(Reviews of all Disney World resort hotels mentioned in this pricing round-up are linked to from here–I’ve stayed in more than 140 different Disney World hotel rooms, and my reviews are based on these stays.)

The other thing that’s new for 2018 is more distinctions among day prices in the same price seasons.  For many (but not all) major seasons, you’ll see new Thursday prices, and in the moderates and values some new Sunday prices as well. 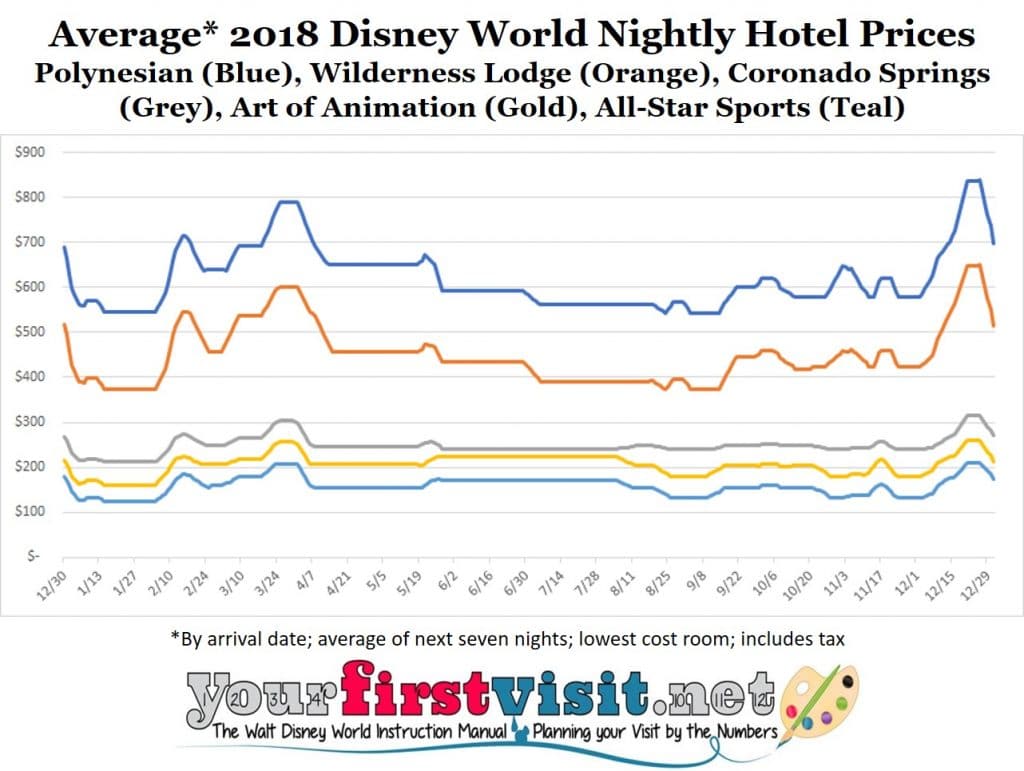 Analyzing Disney resort price changes is difficult—there’s more than 20 hotels, many differently-priced room and view types within them, seven to nine different major price seasons over the course of the year, additional weekend and holiday upcharges, and more. As a result, unless you have a LOT of time on your hands you need to sample, and that’s what I’ve done.

In general, I gather daily price data on the lowest and next-highest priced rooms at all of the resorts (and from more room/price combos if a resort looks odd, as Caribbean Beach and Grand Floridian do in 2018), and then analyze:

In what follows, when I talk about price changes for the entire year I mean seasonally-weighted price changes (that is, weighted based on the percentage of 2018 days in each major price season–there’s seven major seasons at the values and moderates, and nine at the deluxes), and when I talk about a specific price season increase I am comparing average Sunday night to Saturday night prices across the two years, to account for the different prices on different days problem.  So yes, it is some spooky genius math shit.

2018 largely maintains the recent 2017 seasonal structure at the values, although with the day changes noted below. One minor twist is the addition of a few days of Regular season in February (beginning 2/11/18) that were Value season in 2017. (This is a reversion to a pattern we first saw in 2016.) 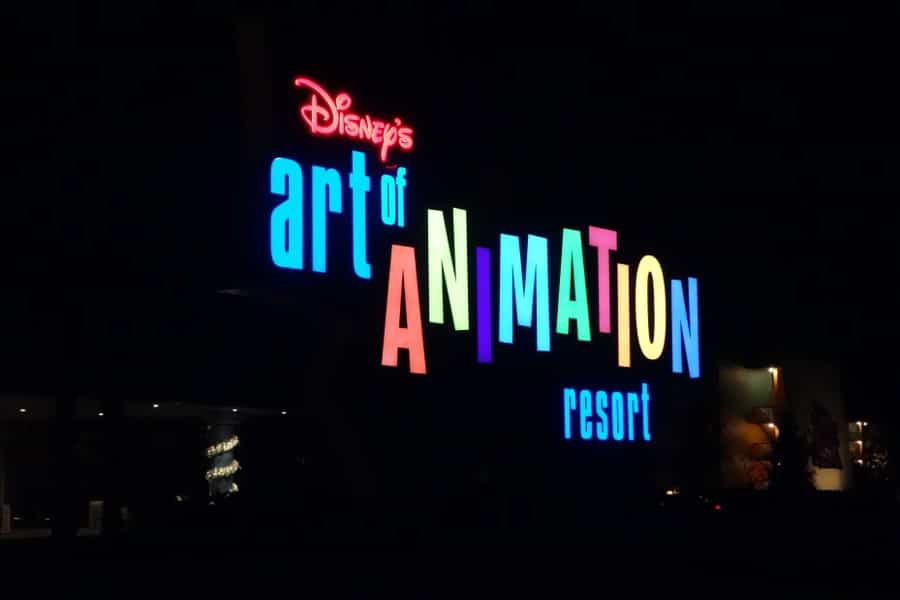 For those who were not paying attention, several years ago Disney introduced the “Fall” price season, which replaced what used to be Value season dates in late November and early December. In 2016, Disney implemented more seasonal changes at the values and moderates, in effect raising prices by moving various dates from lower to higher-priced seasons. Value 2 dates in later August and early September shifted to Fall, and Fall in later September to almost the end of October was shifted to Regular.

Up until 2018, rooms typically had one or two prices during a season. If two, there was one price for Sunday-Thursday and another for Friday and Saturday.

2018 sees more variety in daily prices during the Value, Regular, Fall and Peak seasons. The typical pattern is now Price A Sunday, Price B Monday-Wednesday, Price A again Thursday, and Price C on Fridays and Saturdays.

Here’s an example from Art of Animation during the 2018 Value season:

The effect of this is to make long weekend stays more expensive, and Monday-Wednesday stays less expensive, than would otherwise be the case. This is a somewhat mechanical start (mechanical because at the values, the difference between Price A and Price B is typically a flat $10 across resorts and seasons) to a set of prices that more fully reflect differences in demand by night.

Finally, the much earlier Easter in 2018 means that many more days in March-April will be regular season, and that many less Peak or Easter seasons, than in 2017.  The difference is about two weeks more worth of Regular season prices, mostly in April.

The basic pattern among value resort standard rooms of Art of Animation Little Mermaid rooms being most expensive and the All-Stars being least expensive continues in 2018.

Pop Century rooms see the highest increases for 2018, bringing them a bit closer to the Little Mermaid rooms, but prices in the other value resorts go up quite a bit as well. Little Mermaid rooms remain shockingly close to standard moderate room prices some dates (especially in the Summer season in 2018, where a week in a Little Mermaid room averages $223 a night and a week in Caribbean Beach, which sees no material 2018 price increases until its Fall season, $234 a night). 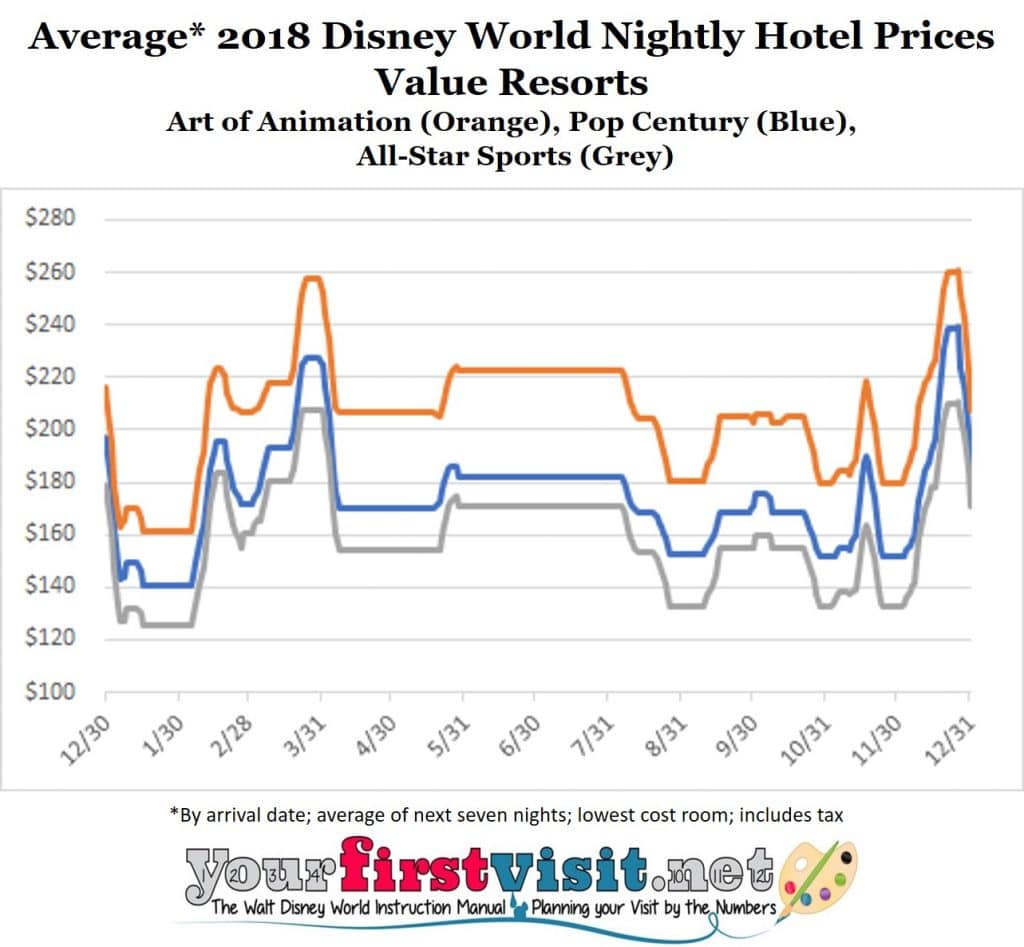 On average across 2018, Little Mermaid rooms are ~$30 more expensive per night than Pop Century and ~$45 more per night than the All-Stars. These differences are shown for standard rooms across the prices seasons in the chart.

For 2018, average year-round prices in standard rooms in the All-Star Resorts are up around 7.5%, with the lowest increases of ~1.5% in the Easter and Holiday seasons and large increases of 6-9% the rest of the year, especially in the Fall season. Preferred rooms show similar patterns but at lower levels, averaging a 6% increase. Moreover, more rooms seem to be priced as preferred than before, such as Jazz at Music and Touchdown at Sports, itself in effect a price increase. Family Suites at Music are up 6.2% and show the same seasonal patterns, including the highest increase of 7% in the Fall season.

Pop Century standard rooms showed the highest increases for 2018 among the values, up year-round at 8% in both standard and preferred rooms. The largest standard room increases are in the Value (9.3%), Regular (9.1%) and Fall (8.1%) price seasons, and the lowest (but still >5%) are in the Easter and Holiday seasons. Preferred rooms at Pop also went up an average of 8% and show similar seasonal patterns, but here the biggest increase is for the Regular season at 9.7%. The price increases are likely related to the new queen beds and coffeemakers that are beginning to show up at Pop Century.

Art of Animation Family Suites at Cars and Lion King are up an average of 6% for 2018. Increases are pretty tightly grouped across the year, but are highest in the Fall season (7.1%) and lowest in the Easter and Holiday seasons (both 4.6%). Finding Nemo 2018 increases are similar.

The moderates saw for 2018 the same insertion of Regular season nights into early February, and the same new Sunday and Thursday pricing in some price seasons, that the values did.  See the discussion above for details. 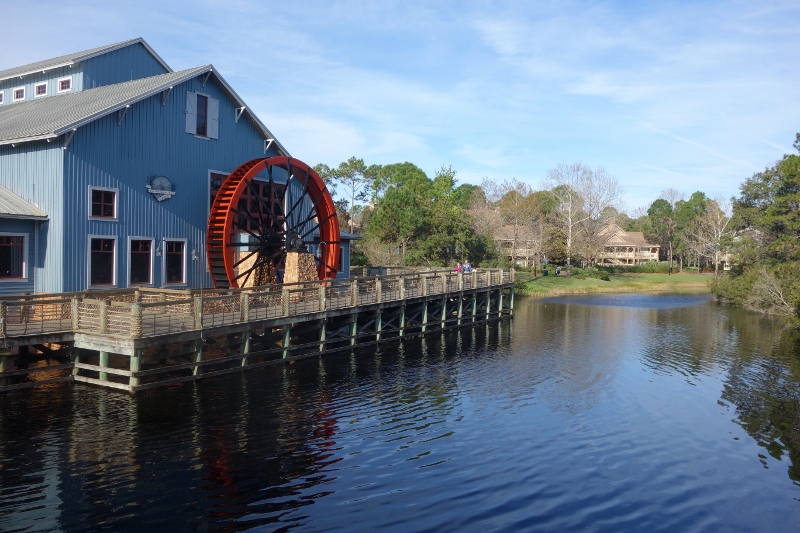 Until 2016, Caribbean Beach, Port Orleans French Quarter, and Port Orleans Riverside standard rooms had the same prices, while Coronado Springs tracked them some nights and other nights was $3-5 more.

In a major change, in 2016 Riverside and French Quarter became the most expensive moderates. This gap widened substantially in 2017, and widens a bit more in 2018. 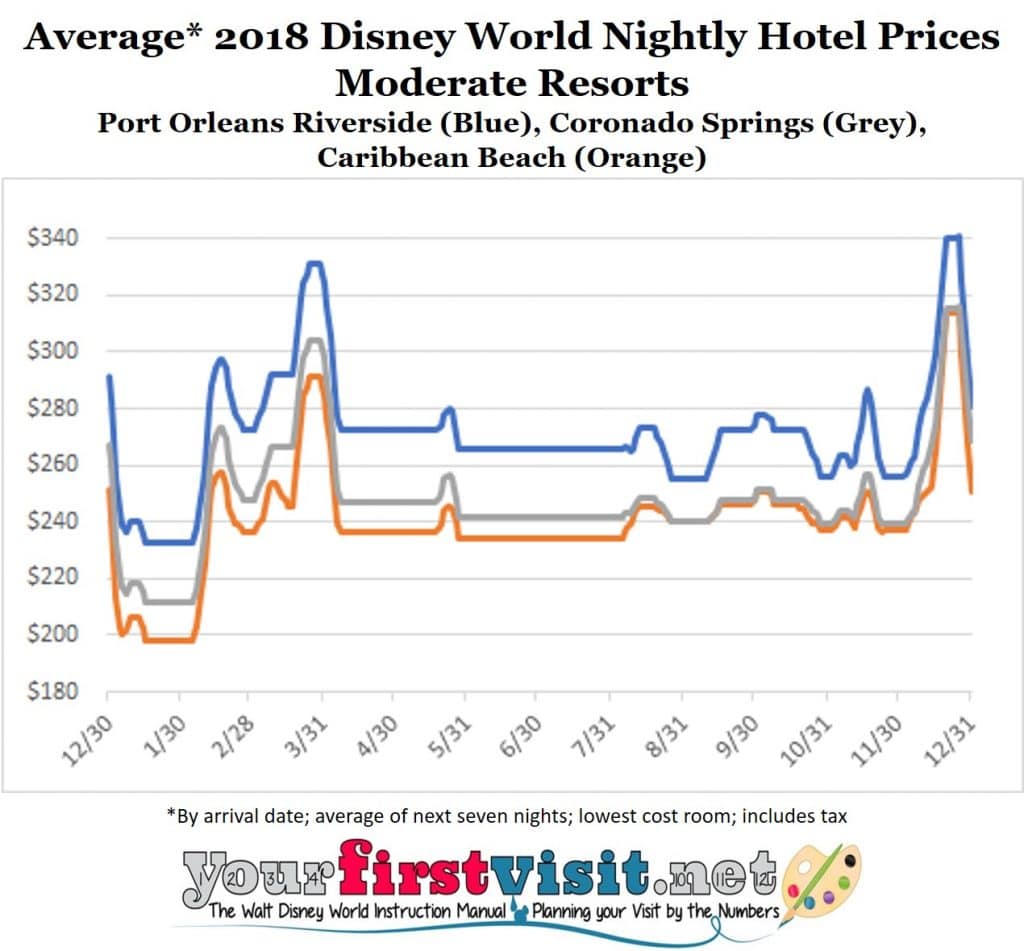 Coronado Springs standard rooms show average price increases for 2018 of 5.7%, with the biggest increases in the Value (8.4%) and Fall (7.2%) seasons. Preferred rooms at Coronado Springs are up 4.6% with a range across seasons of 4-5%, except the Easter season, up only 2.8%.

Caribbean Beach prices for 2018 show a fascinating pattern, with almost no increases in any room type (I checked out 5 types) during any of the seasons that launch in the first half of the year, but 4-6% increases in the two seasons that first appear in the second half of the year–the Fall and Holiday seasons. I imagine this pattern is from the refurb/construction that’s happening there, and the pattern–the Fall season opens in late August–gives a suggestion as to when this work will be done.

Prices for Port Orleans French Quarter and Port Orleans Riverside standard rooms, after rocketing up 7-9% across all the major seasons in 2017, see an average increase of 6.4% in 2018, with prices across all major seasons going up 5.5 to 7%. This is higher than the 2018 increases at either Coronado Springs or Caribbean Beach, and thus widens the price differential of the Port Orleans resorts with the other two traditional moderates that we first saw in 2016.

The deluxe resorts run to a different price season calendar than the values and moderates, especially from early July through mid-November.

Their 2018 price season calendar is similar to that of 2017, with the main change being the addition of a few more days of Peak season pricing the week after the Easter season.

The deluxes also see in 2018 the added complexity in day-by-day prices as the values and moderates, but not so much–only for three seasons (Value, Peak, Regular), not four, and typically only for Thursday nights, not the Sundays and Thursdays of the other resort classes.

There’s a bewildering plethora of price points at the deluxes—many view options, with “Club” service options as well. I sampled the full set of price changes in eighteen deluxe room types, and based on that saw no material changes among the overall resort price standings. 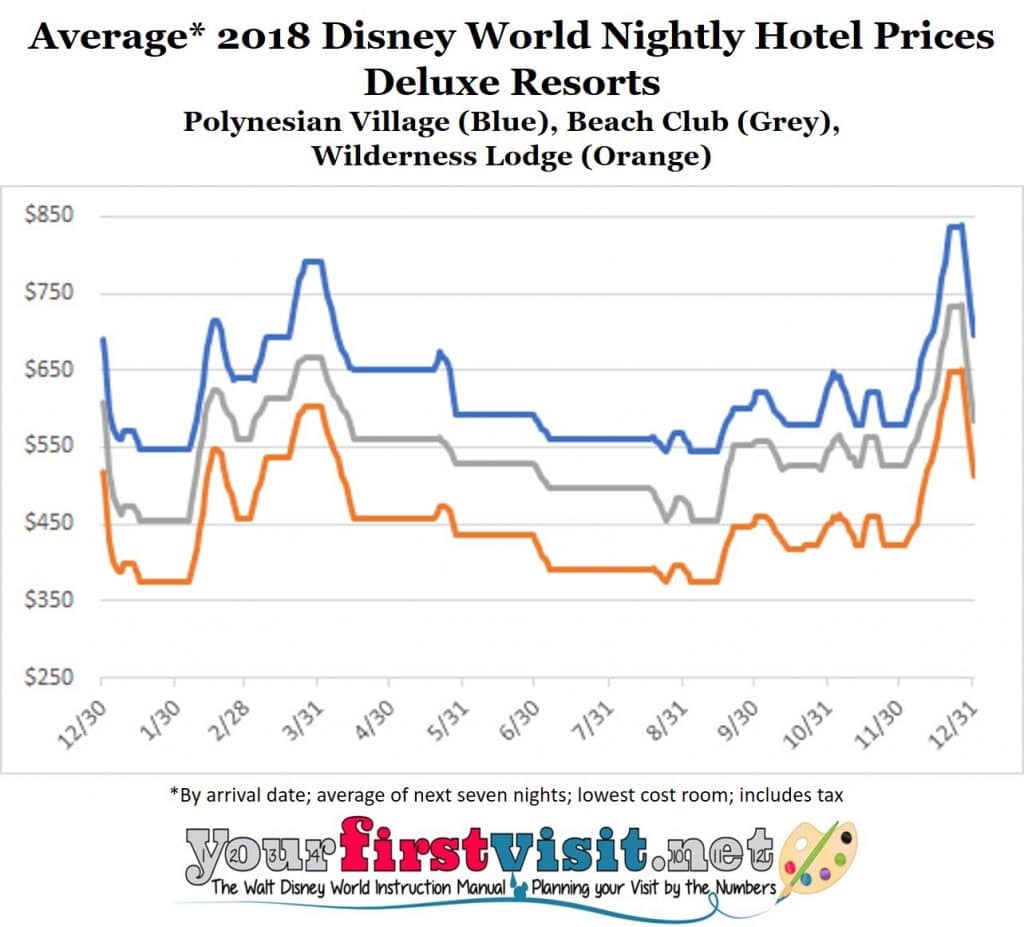 The Grand Floridian is still the most expensive, and standard rooms at the Wilderness Lodge are still largely the least expensive (some seasons, standard view rooms at Animal Kingdom Lodge are cheaper).

In general, there’s three price groupings among standard deluxe rooms.  The three monorail resorts–the Grand Floridian, Polynesian and Contemporary–have the most expensive standard deluxe rooms, the Epcot resorts the Yacht Club, Beach Club, and BoardWalk Inn the next most expensive, and standard rooms at the Animal Kingdom and Wilderness Lodges the least expensive. Price differences vary across the year, but as you can see in the chart above, are on the order of $100/night for each group.

After restrained price increases in 2017, most deluxe rooms are up 5-7% for 2018, with the exception being the Grand Floridian, which for the second year in a row has seen next to no increases.

Polynesian Village standard view room prices were essentially unchanged in 2017, and have gone up 5.1% for 2018. Prices increases are tightly grouped in all principal 2018 seasons except the Regular 2 season, when they go up only 2.6%. Poly lagoon view prices are up 4.2% for 2018, tightly grouped all major seasons except for the Fall season, when they go up just 2.6%.

Grand Floridian standard view rooms had an average increase of 1.3% in 2017, and in 2018 have no increase.  Two other view types I checked also had no increase for 2018.

Wilderness Lodge standard rooms, after an average 5.4% increase in 2017, are up another 5.9% for 2018. Season increases are tightly in the 5-7% range. Courtyard view rooms here average a 6% increase.

BoardWalk Inn standard view room prices, after being largely unchanged in 2017, are up on average 5.7%, tightly grouped among the seasons with 4.6% to 6.3% increases. Water view rooms here are up 5% and show the same pattern of a narrow range of increases across all 2018 major seasons.

Standard view rooms at the Yacht Club and Beach Club are up for 2018 5.5% on average, grouped among seasons from 4.5% to 6%. The next most expensive room class in each are both up around 5%, also with a tight grouping in price increases for the seasons. 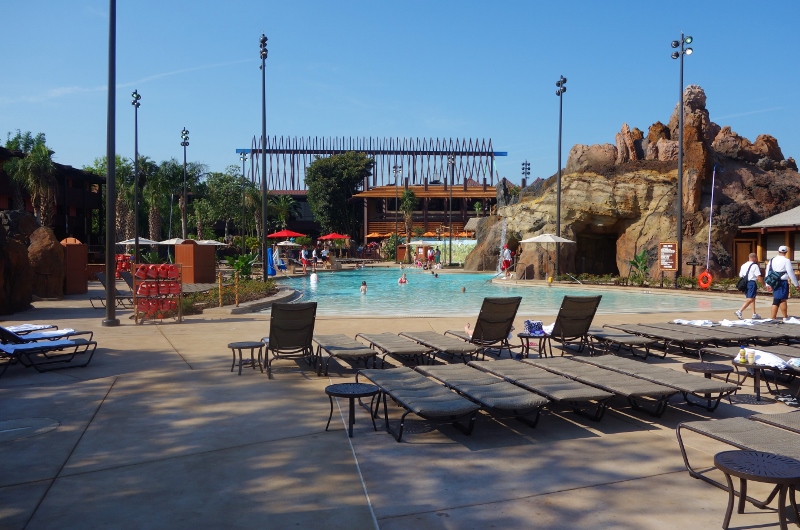 MORE ON THE DISNEY WORLD RESORTS

I’ve stayed in more than 140 different Disney World-owned rooms, suites, villas, and such. Reviews resulting from these stays are linked to here.

previous post A Friday Visit with Jim Korkis: The Sunshine Tree Terrace
next post Next Week (July 8 through July 16, 2017) at Walt Disney World