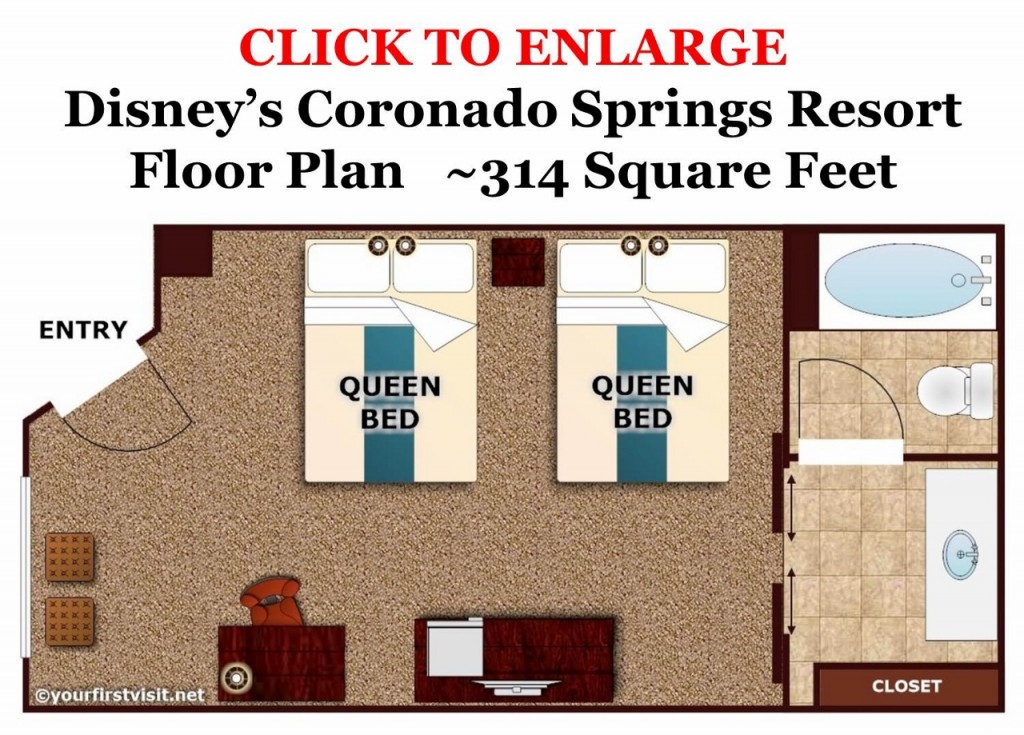 This page is a photo tour of one of the remaining not yet refurbed rooms. The rooms at Disney’s Coronado Springs Resort, while generally familiar to those who have stayed in other Disney World traditional moderate resorts, do have some real distinctions–mostly from adapting the basic layouts to the needs of convention visitors. 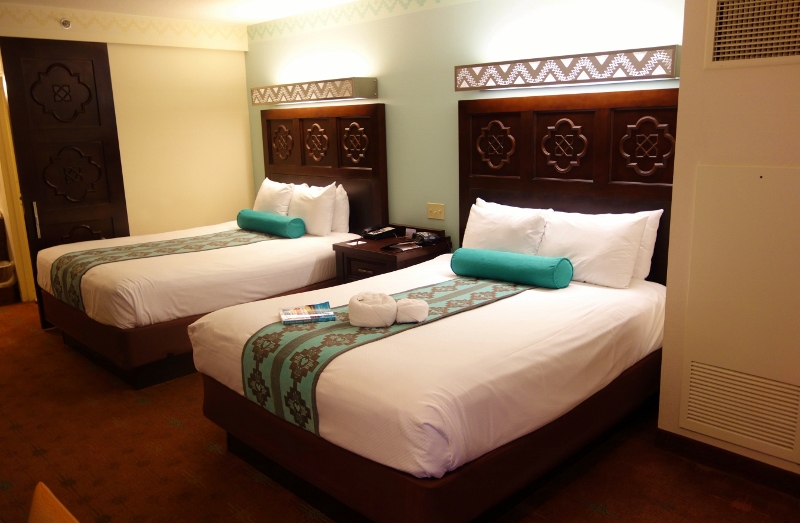 You’ll find two queens separated by a night table on one side of the room. 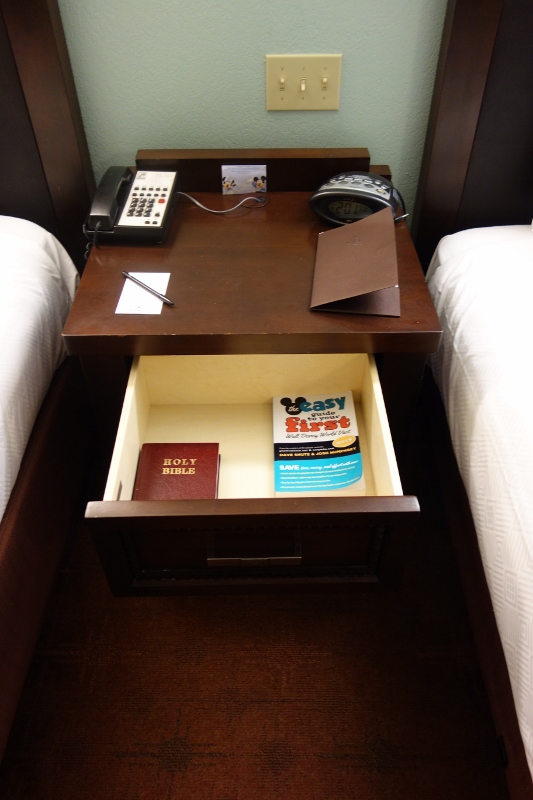 The night table has a drawer large enough for important books. 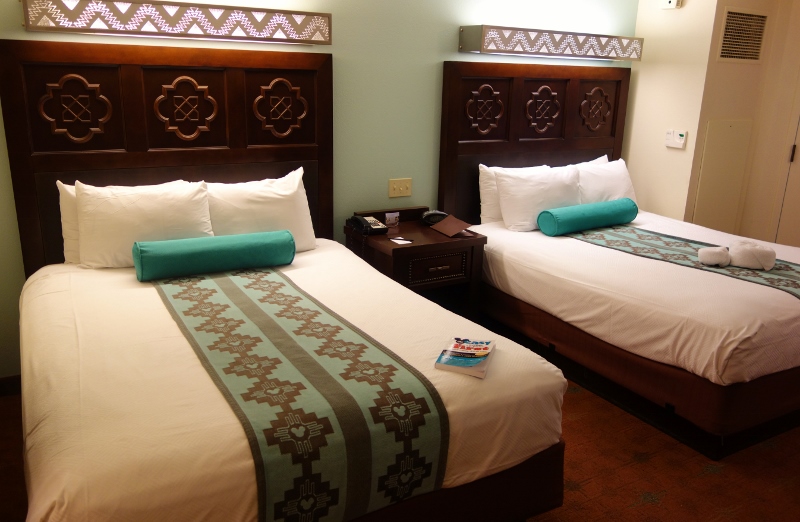 Here’s a view of beds from the bath side of the room. 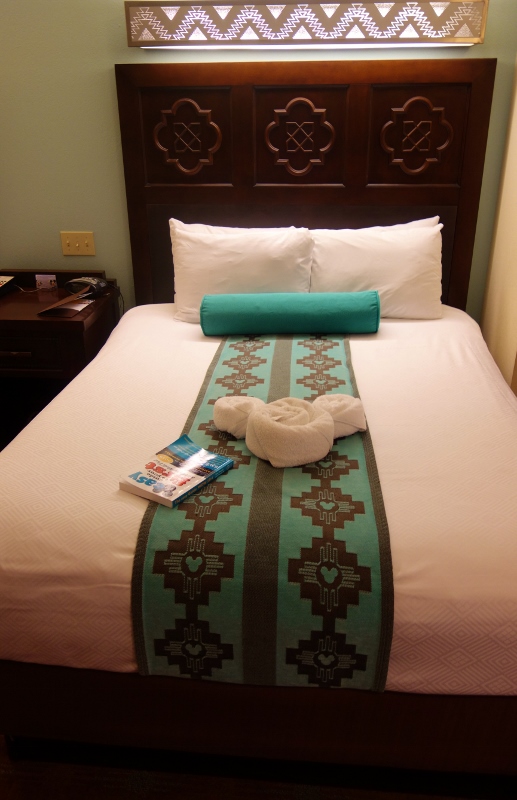 The linens are elegant in a way typical of the room’s furnishings and fittings. 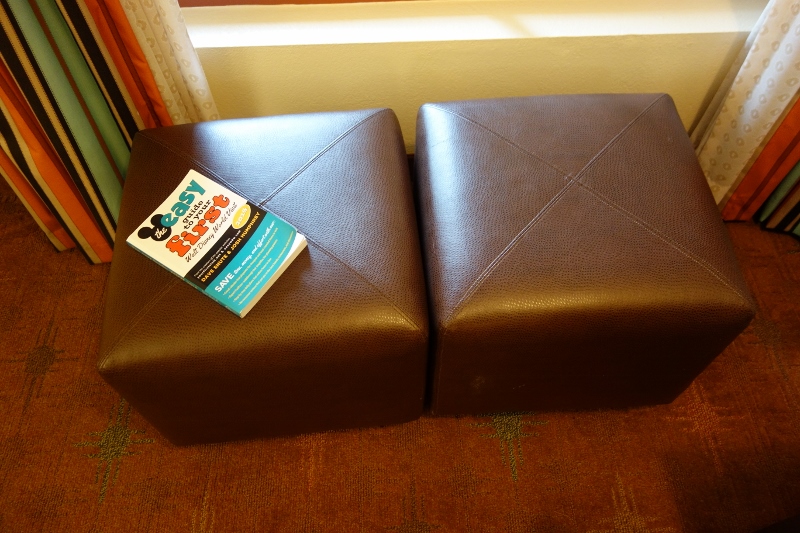 The area right in front of the windows is open. You’ll find here, instead of the air handler of other moderates, two ottomans. These can be used as chairs and moved around the room. 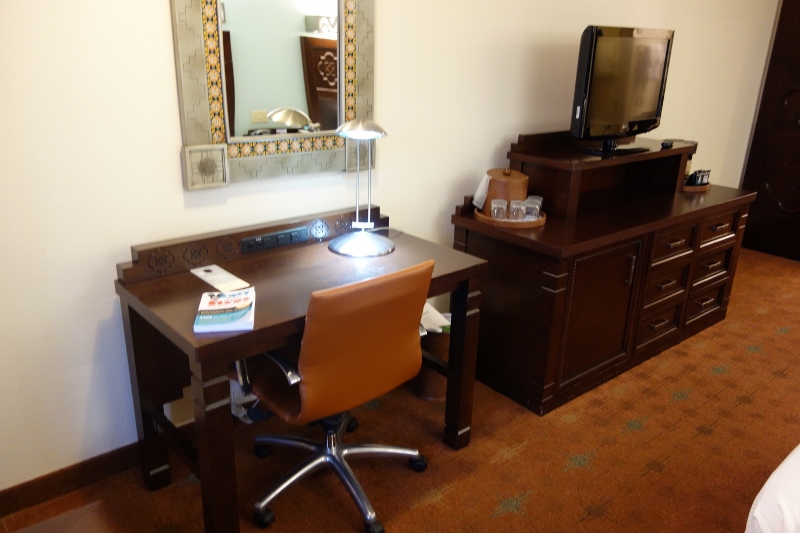 On the side of the room away from the beds, you’ll find a desk–not the table and chairs found here in the other moderates–and an integrated dresser/mini-fridge/TV unit. 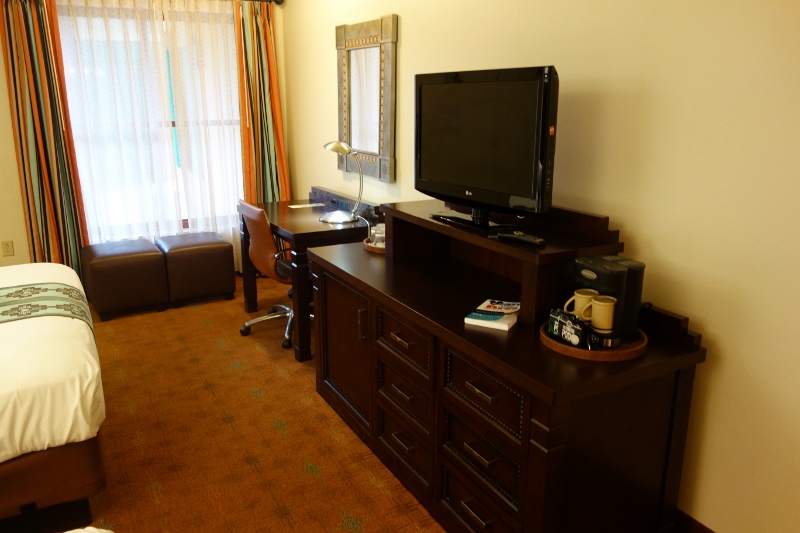 Here’s the same side of the room as seen from the bath area. 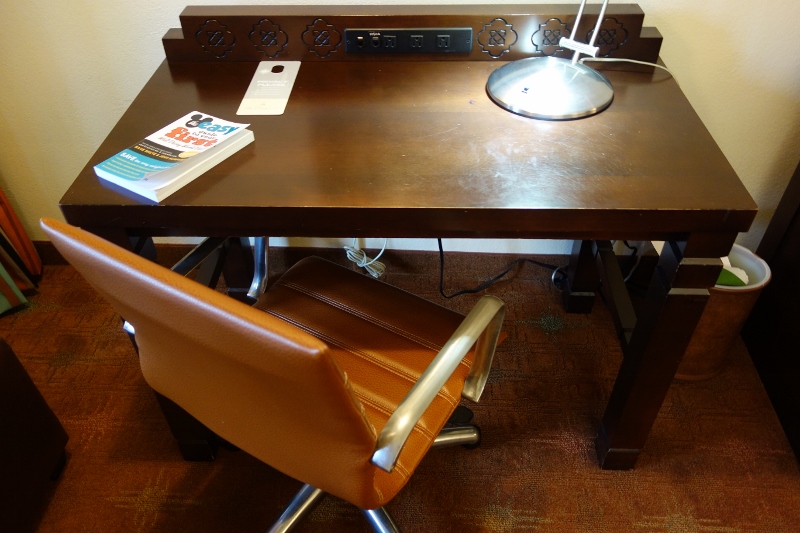 The desk is fine for one person to work at, and, if you pull over an ottoman, can also serve as a table. 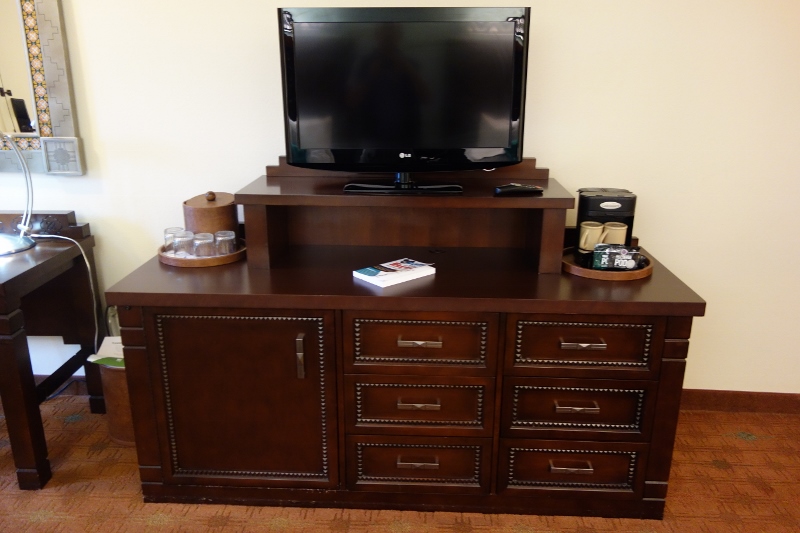 After the desk, the next feature of the room inspired by taking care of two convention visitors per room is the combined TV thingy/dresser/fridge, the next item along this wall. 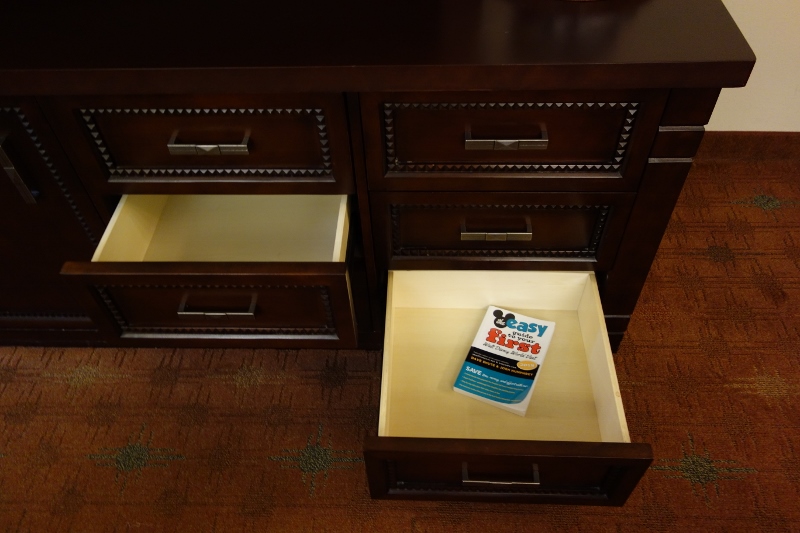 Note the two columns of drawers. The other moderate rooms typically have several large drawers for a family; these rooms have six smaller ones, so that two conventioneers can each have a stack of drawers. 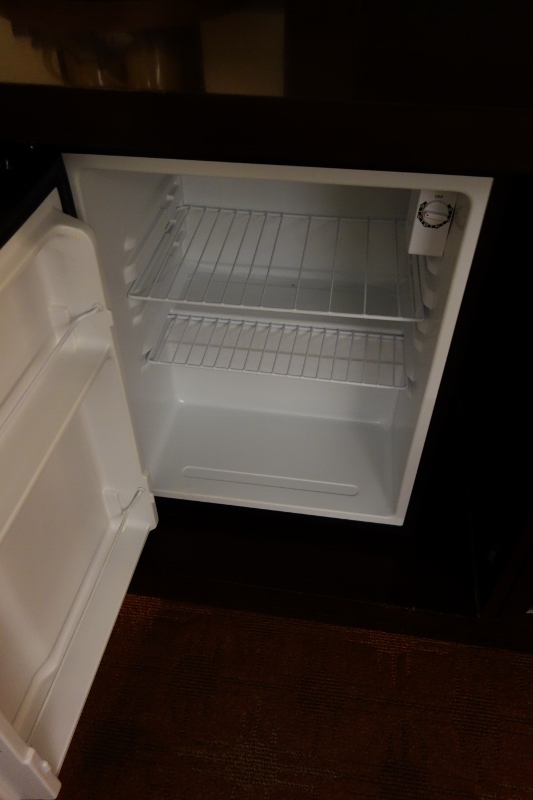 Next to these is a mini-fridge. Beyond, rather than the kids bench you’ll find in other moderates, is blank space–perfect for a luggage rack. 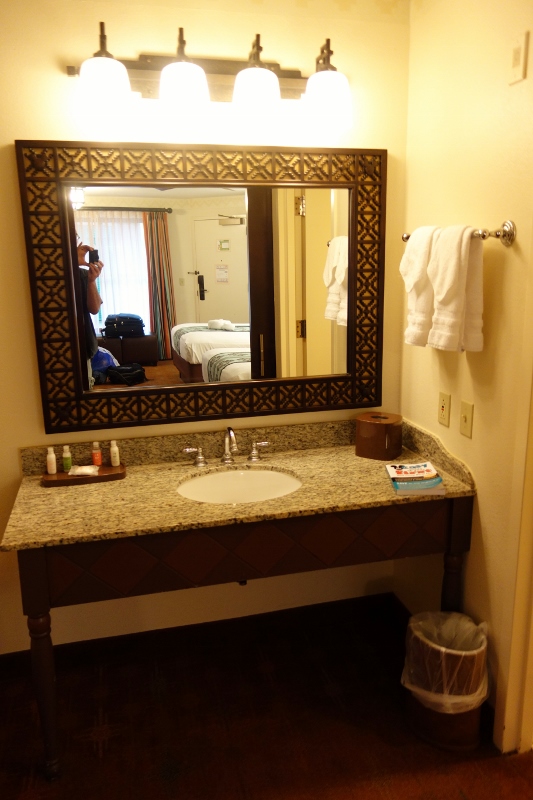 The bath has just one sink. (Refurbed rooms have two.) 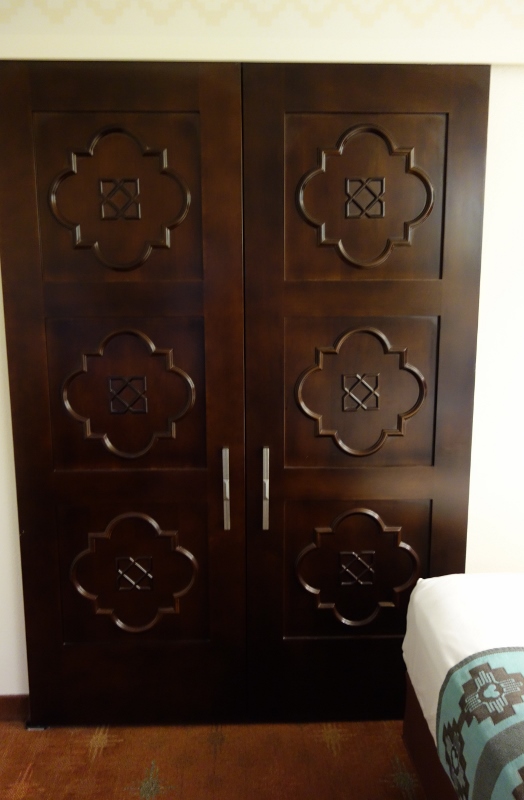 Instead of being separated from the rest of the space by fabric curtains, rolling wooden doors isolate the bath from the sleeping area. In the other moderates, you’ll find similar doors only at Caribbean Beach. 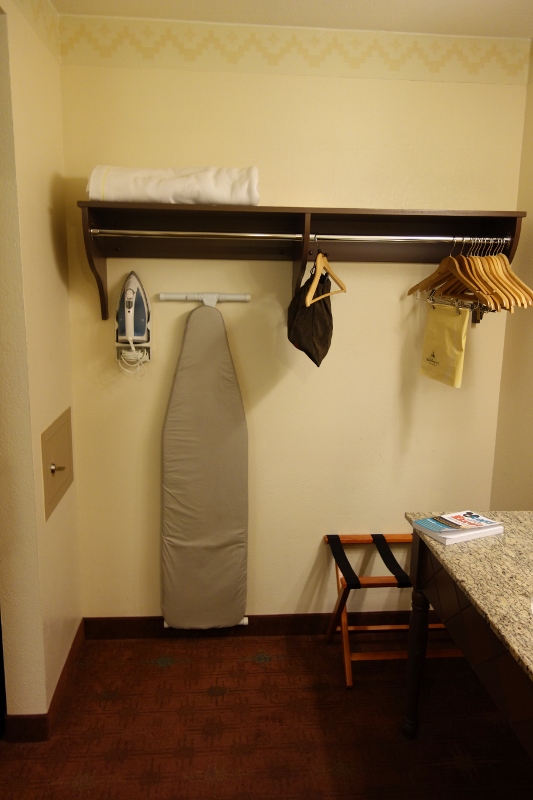 Also in the sink area is the hanging rod, iron, and ironing board. 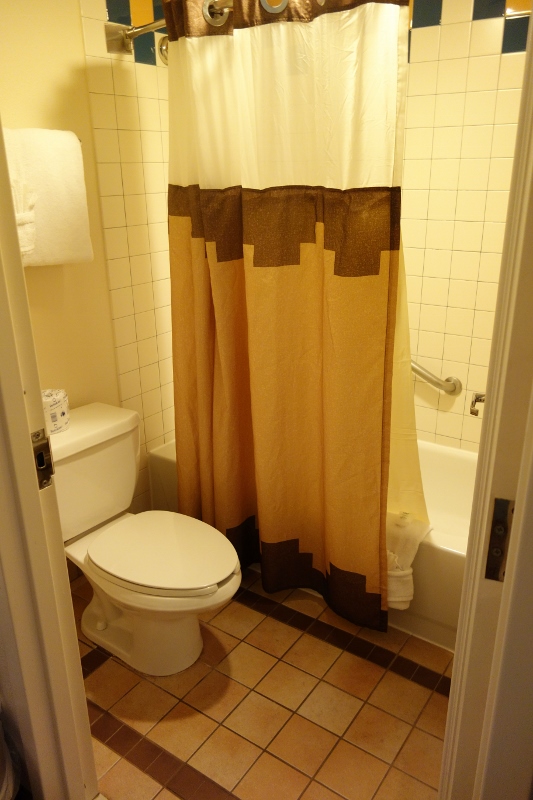 Finally, as usual, the tub and toilet area is in its own separate walled enclosure.

There’s a couple of these differences between Coronado Springs rooms and rooms in the other traditional moderates that I see as losses for family visitors–the lost sink, the lost table and two chairs, the lost kids bench.

Others, however, are clear positives–the extra living space in front of the window, the extra drawers, the two ottomans, and the wooden bath separator.

On balance, I think these rooms are just fine for families, but you may have to think about each little difference compared to the other traditional moderates in the context of your specific family!

The refurbed rooms will be better than most families, adding as they do a second sink, a bigger TV, an easy chair, and Disney theming–which you won’t see at all in not-yet-refurbed rooms.