A Friday Visit with Jim Korkis: The Ghosts of Walt Disney World 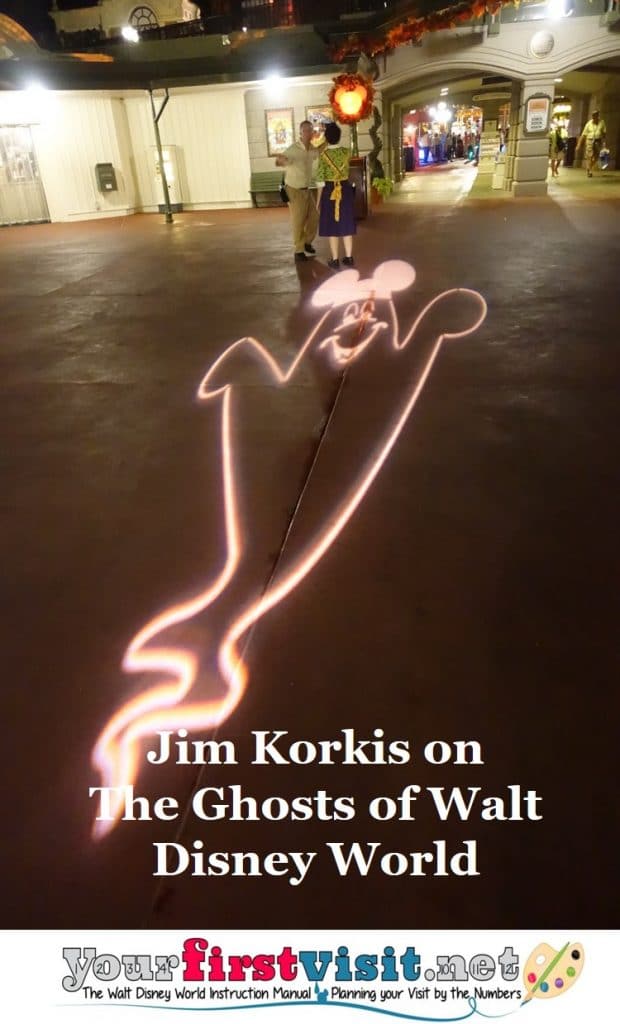 THE GHOSTS OF WALT DISNEY WORLD

Reportedly at Walt Disney World, a young boy rides in a doombuggy in the Haunted Mansion and leans out to smile at the riders behind him. However, when cast or guests try to locate him, he cannot be found.

WDW’s Pirates of the Caribbean is supposedly home to a construction worker named George who died in the attraction. Cast members say “good morning” and “good night” to him over the PA system each day to prevent him from causing mischief. If they don’t, the ride has been claimed to stop unexpectedly at times or have problems with lighting.

Some even claim that a smiling Roy O. Disney has been seen walking down WDW’s Main Street.

These are just a few of the many ghost stories that have been reported and we all know that at a Disney theme park anything is possible.

Of course, we also know that there are 999 happy haunts in the Haunted Mansion, but few guests who ride the attraction realize that briefly they become one themselves.

In 1957, Disney Legend Anderson developed four story concepts for the Haunted Mansion, all of which feature elements reflected in the final version of the attraction that was eventually opened at Disneyland on August 9, 1969.

According to Anderson’s best known storyline, a well-known and feared pirate captain quietly retired to private life in a seaside community, like the famed Captain Henry Morgan. He changed his name and used some of his ill-gotten booty to establish himself as a respected and prosperous man. To make his life even more complete, he chose a lucky eighteen-year-old to be his bride and bear him many children.

The only restriction he gave her was to stay out of the attic of their magnificent mansion. The curious girl couldn’t resist and, on their wedding day before the ceremony, but dressed in her wedding gown, she snuck up into the cluttered attic and found a locked trunk that she forced open.

Inside the trunk were souvenirs and documents from the man’s previous life. The pirate captain caught her in the attic and, enraged that his secret might be revealed to the community by this foolish girl, he tossed her out the window to her death.

In the Haunted Mansion attraction that was finally built, guests actually relive this experience of being tossed out the window. Next time, look to your right as you leave the attic through the window and you will see that the shingles on the roof of the mansion do not match the ones on the outside of the mansions at Disneyland or Walt Disney World. Like a medium, you have become the girl and see what she saw, including the house from which she fell to her death.

That’s also the reason you are falling backward as you drop down just as she did. The caretaker at the bottom is not scared by the graveyard but by you since you are now the final ghost to enter it so that there will be a 1,000 happy haunts. He is looking at you and shaking not the graveyard filled with ghosts.

The girl’s ghost haunted her fiancé so mercilessly that the only way he could find peace was by hanging himself. However, their passions were so intense that their spirits were bound to the mansion for all eternity. Their continuing struggle, even after death, attracted other ghosts, including some who came to celebrate a wedding that will never be held.

Now with the changes to the attic story where Constance Hathaway dispatched her wealthy husbands with an axe, that original storyline has been changed significantly.

Thanks, Jim!  And come back next Friday for more from Jim Korkis!

In the meantime, check out his books, including his new Halloween-appropriate Vault of Walt Volume 9: Halloween Edition, and his other new book, Hidden Treasures of the Disney Cruise Line.