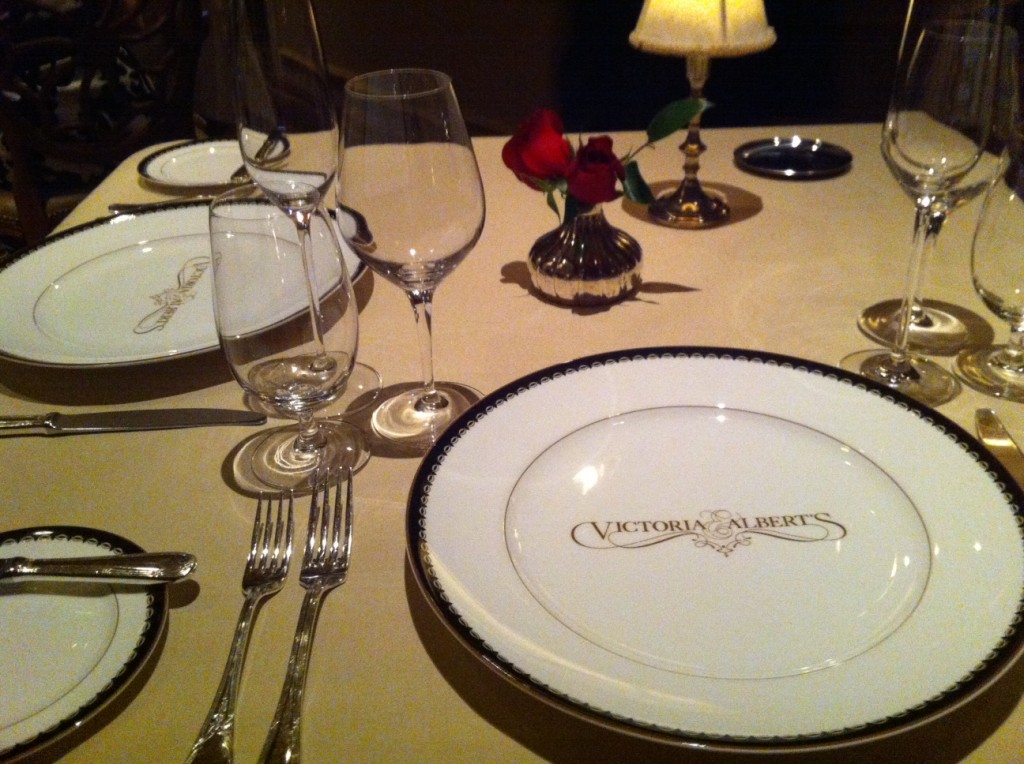 Astonishingly expensive (expect dinner with wine pairings for two to exceed $500 including tax and tip), Victoria and Albert’s provides an even more astonishing dining experience—one worth well more than the price.

THE VICTORIA AND ALBERT’S EXPERIENCE

Zagat’s entry on Victoria and Albert’s gushes a bit, but its “once in a lifetime experience” resonates—both regarding the quality of dining, and the cost! 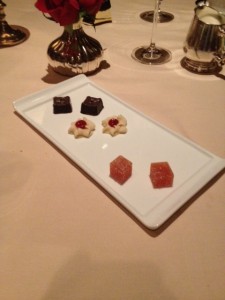 The dining room at Victoria and Albert’s offers a prix-fixe menu, with nominally seven courses, although if you count the candy at the end and the three amazing bread courses, you’ll get a bigger number.

For $150/person (at the time of this writing), the courses include an amuse-bouche, an appetizer, a fish course, a warm appetizer, an entrée, a cheese course, and dessert.

For this price, except for the amuse-bouche and the candy—the same for everyone–you’ll have at least two choices in each course, and, with a vegetarian option added in, often three. 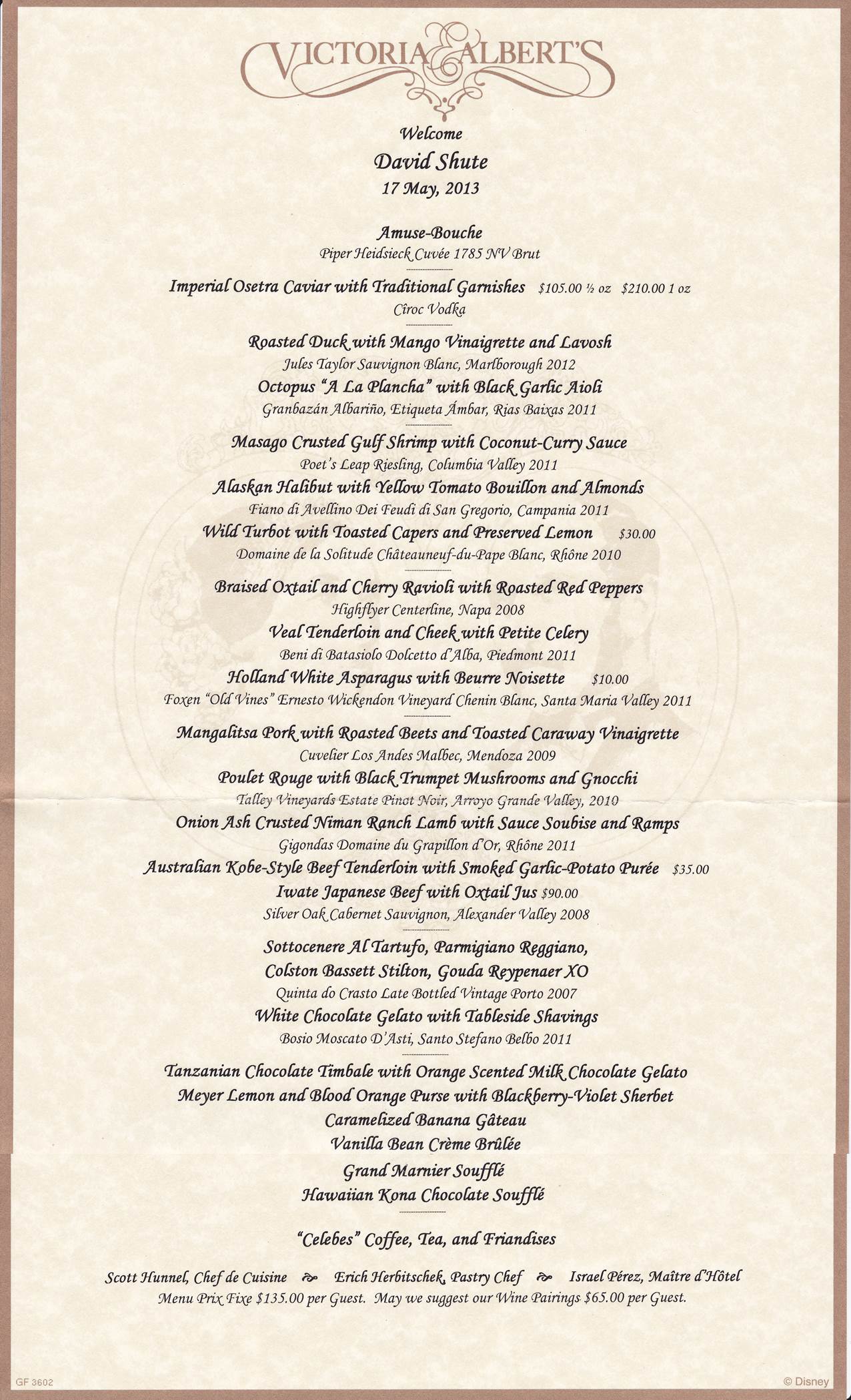 Several of the courses have additional alternatives beyond these, for an additional price.   (The image is a scan of my main menu–click it to enlarge it.  The vegetarian options were on a different page.)

Sensible people who aren’t driving (we walked over from the Polynesian) would add the wine pairings at another $65/person.

For this price you get a “half glass” per course of carefully chosen wine, beginning with champagne.

(The actual amount poured is determined by your server; our pours were large, and re-filled during the entrée course; I was consistently a quarter of a glass behind the course…).

This is a lot of wine; you don’t need to drink it all, but what you do need to do if you are here is put yourself in the hands of chef Scott Hunnel, including the wine pairings.  The wines were both spectacular in themselves (my favorite was the Poet’s Leap Riesling; my son’s the Silver Oak cabernet) and also wonderful accompaniments to the courses as they emerged.

The menu varies with the season and the inspirations of chef Hunnel and pastry chef Erich Herbitschek (who both runs this section of the kitchen and also makes all wedding cakes at Walt Disney World).

So our specific observations on particular courses are not worth much, as your options may differ.

My older son and I—we were there to celebrate his graduation from law school—ordered different choices for each course, allowing us to sample each other’s selections.

We agreed that not only was this in total the best meal we had ever had, but also that at least three or four of the seven individual courses were the best instances of those courses we had ever tasted. 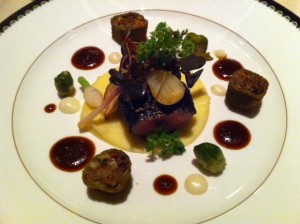 On our visit, particular standouts were the fish, entrée, cheese, dessert, and bread courses—and the wine. 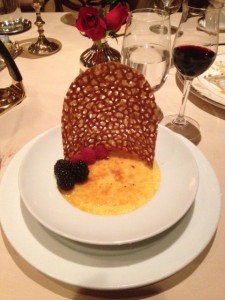 For dessert, my son had the best crème brulee he’d ever had

I had the caramelized banana gateau. Our female server had recommended the gateau, and our male server (each table has two servers) noted that it was “the favorite of nine out of ten staff members, with the tenth being an idiot.” 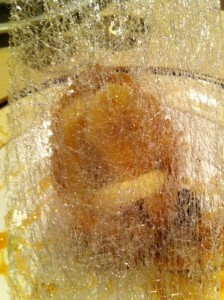 This is a place to listen to recommendations…the gateau was a simple but remarkable combination of pastry, bananas and a marzipan-like cream that I’ll remember the rest of my life.

We were expecting much of this restaurant…and we got even more.

MORE ON VICTORIA AND ALBERT’S 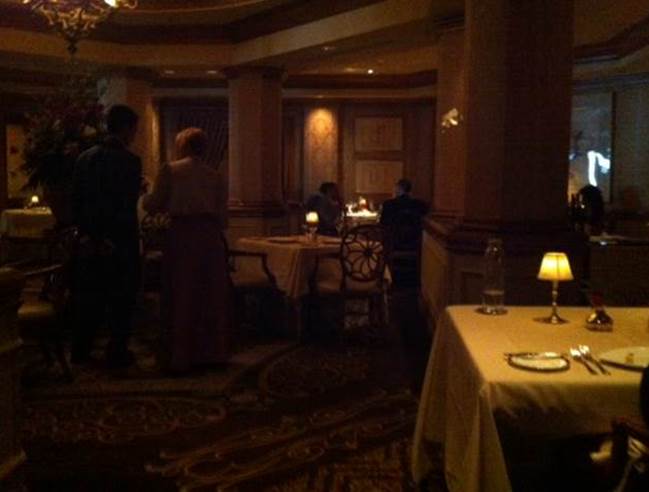 The setting—just 18 tables in a surprisingly small room—is widely acclaimed as romantic.

Not to me—the décor, themed as dark Elderly Aunt, has no romantic resonance.

Further militating against the romance are the costumes of the cast members, meant to be reminiscent of Victorian servants, but reminding me instead of the Haunted Mansion for the male servers and Liberty Tree Tavern for the female servers.

The lighting, though, is very fine—the room overall is dark and intimate, but the tables themselves are very well lit, enabling you to nicely see both your fellow celebrants and the spectacular food.

Kids under ten aren’t allowed—but I wouldn’t bring any kids here regardless of age who have not already experienced and been delighted by fine dining.  It’s too expensive—and, at several hours, too long—for inexperienced kid diners. 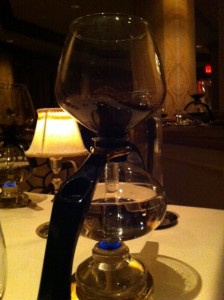 Think of this instead as the place for the parents’ night out, or for a celebration.

Depending on the time of year, there’s one or two seatings per evening, with a window within each seating of about 45 minutes or so in which reservations are granted.

The staff called me a few days before, to confirm our reservation, remind me of the dress code, and ask if we were celebrating anything special.  The celebration, if any, is marked into your souvenir menu, and noted at the maître d’s station as well.

Victoria and Albert’s is not covered by any of the Disney dining plans, but does grant “Tables in Wonderland” discounts.

previous post The Best Time to Buy Disney World Tickets? Probably Right This Minute...
next post Next Week (5/25 to 6/2/2013) at Walt Disney World