The Common-Sense Guide to Easter Week at Walt Disney World

The weeks before and after Easter are two of the most wildly crowded weeks at Walt Disney World.

The common-sense approach to handling them is to run, screaming, back home.

But if that’s not an option for you, here’s some more common sense that might help.

HANDLING YOUR DAYS AT WALT DISNEY WORLD DURING EASTER WEEK

You need a good plan for each day.  I’ve already covered this here, but the basics are

PICKING WHICH PARK TO VISIT WHICH DAY

The trick to finding the best days to visit the parks is to figure out what everyone else will do, and do the opposite.  This is the “judo” of Walt Disney World. 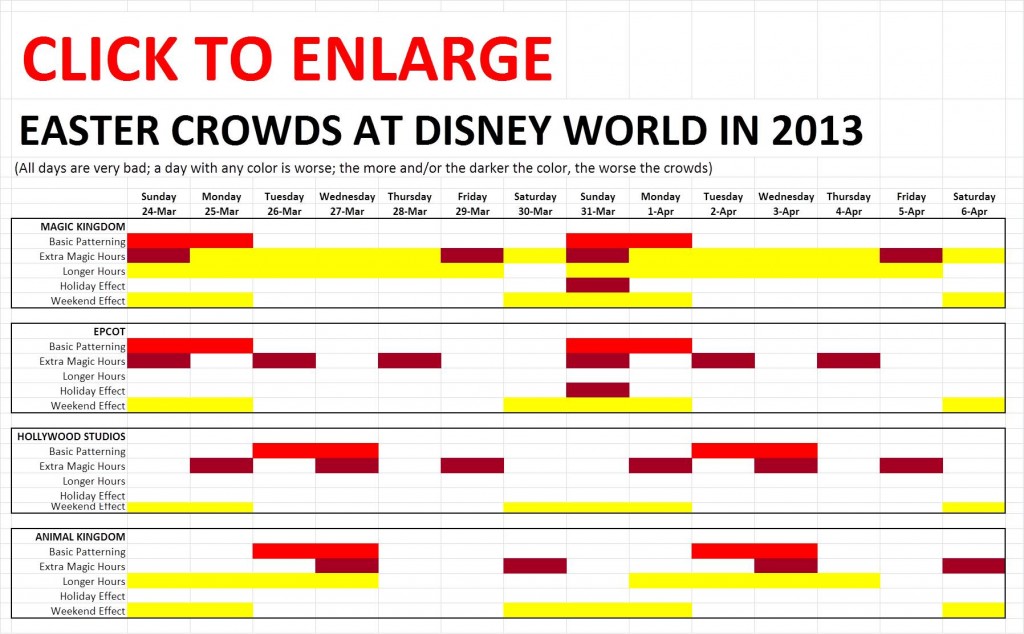 I’ve done this for the two weeks around Easter, where days with more color, and especially more darker colors, are worse.  See the chart–click it to enlarge it.

The best days at a given park will have three characteristics:

Epcot on March 27 is a perfect example of this.

The chart is built on the five common sense items that drive crowds at Walt Disney World:

Combine all these drivers, and you can see how some days will be worse, and some better.  The weeks overall will be horrible–but having a plan will help a lot, and picking your days carefully will help some too!