Little Mermaid Rooms at Art of Animation: Not “Girly,” and Not Far

THE LITTLE MERMAID SECTION OF DISNEY’S ART OF ANIMATION RESORT

Prior to the opening of the Little Mermaid sections at Disney World’s new Art of Animation resort, there were a couple of concerns about these standard value resort rooms:

Well, these rooms opened over the weekend of September 15 and I stayed in one starting the Tuesday after opening. A full review begins here, but I can tell you now that the walk to Animation Hall is 7 minutes or so, and that these rooms aren’t remotely “girly.”

Here’s the scoop on these two concerns. 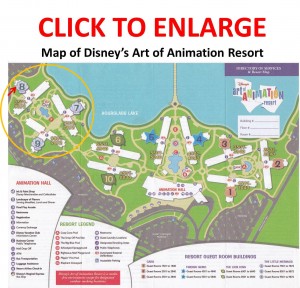 My room–I didn’t ask for this, my readers are just lucky that way–was about as far as you can get from the main services in Animation Hall.

See the image–the Little Mermaid section, where all of Art of Animation’s standard rooms are (see this for its Family Suites, a different room type), is in the orange circle.

My room, on the 4th floor in the area indicated by the red arrow, is just about as far as you can get from the main services, in the lower middle of the map.

I timed multiple trips back and forth, and they ranged from 6.5 minutes to 7.5 minutes.  Now, I walk a little faster than most, but regardless, that’s not a hardship. 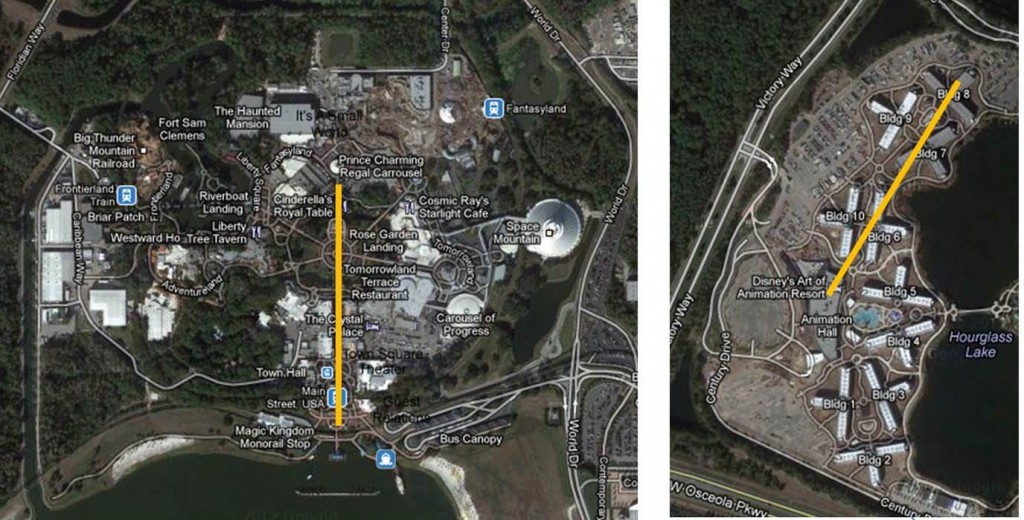 The distance is, in fact, about as far as it is from the entrance of the Magic Kingdom to the Carrousel in Fantasyland.  See the images–they are at the same scale, and in each the orange line is the same length.

There’s been some concern that the theming of this area and its rooms would be all Ariel and her loot and combs and such, and that this might be off-putting to little boys.

Not so; in fact, you could even argue that it’s thin on Ariel. 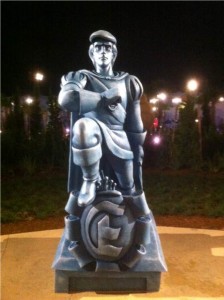 The theming of the buildings and grounds of this section is meant to recall the settings and characters of the film, not Ariel.  The first character you see is not Ariel, but rather Prince Eric, in a heroic pose. 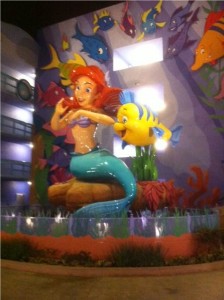 There is a three-story (!) depiction of Ariel deeper in the area, but not only is she no more prominent than, for example, Triton, but also the initial view of her is occluded by the Prince Eric statue. 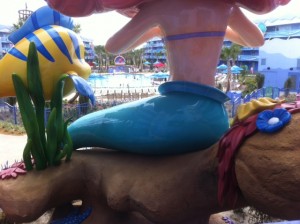 By the way, it’s not that Ariel is charmless for little (and big) boys; the concern was that this area and its rooms might be all Ariel all the time…but it isn’t, by a long shot… 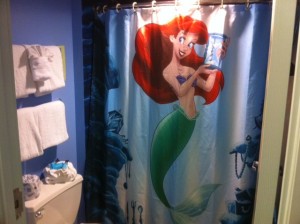 In the rooms themselves, you see Ariel only on the shower curtain. 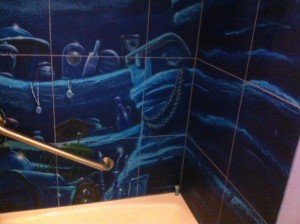 The only other direct reference to her is the tub surround, which mimics her lair. 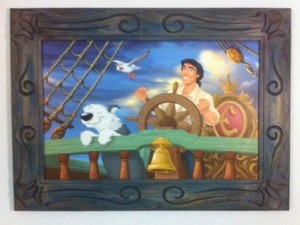 In the main sleeping and living area of the room, you don’t see Ariel; rather, you’ve got another heroic pose for Prince Eric and his teeth… 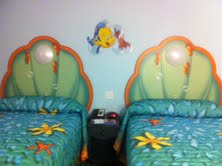 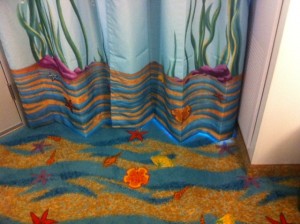 …and lots of nicely done work meant to indicate the you are indeed “under the sea,” and walking on the sea floor–note the carpet and how sea plants “grow out of it” on the window curtain… 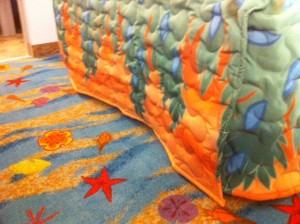 ..and on the bedspread.

The Little Mermaid section of Disney’s Art of Animation Resort is themed around the movie, not the character.  It doesn’t overdo Ariel, and if anything is a little short on her and long on a heroic vision of Prince Eric.  As a result, little boys will like it just fine, and some little girls will miss Ariel a bit.