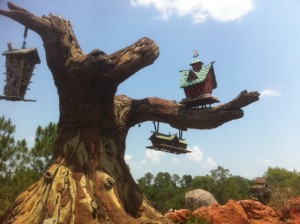 I review rides only when they are new or after they have changed, on the theory that first time visitors ought to try them all and hence don’t need reviews. 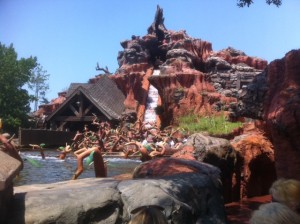 SPLASH MOUNTAIN AT THE MAGIC KINGDOM

First things first: the changes don’t affect the ranking of Splash Mountain as a “favorite” for older kids and adults and “avoid’ for pre-schoolers.

The issue for pre-schoolers is not just the 40” height requirement. It’s also the visual prominence of the big drop.

The effect of the big drop on the imagination, when combined with the multiple drops that happen over the course of the ride, can lead little ones to spend the entire ride in a state of panic.

Older riders, by the way, can be scared off by the view of the big drop as well. It can cause them to think that the ride is just about drops and thrills.

Nothing could be further from the truth.  Splash Mountain is probably the single best combination of classic Disney audio-animatronics and staging  that shows fun characters, settings and songs with (mild) thrills. It is, to me, the quintessential modern Disney theme park ride.

Not that it’s all that modern…

Splash Mountain opened at Walt Disney World in 1992–the last “E” Ticket ride to have been built at the Magic Kingdom. (20 years later, a new Magic Kingdom “E” Ticket will open in 2012 as part of the Fantasyland expansion.)

As Jason Surrell notes in his The Disney Mountains: Imagineering At Its Peak

, Disney World’s Splash Mountain was adapted from the version of the ride that had opened three years earlier at Disneyland.

The  Disneyland ride concept was developed by Tony Baxter, produced by Bruce Gordon, and, according to Surrell, in essence green-lighted by Michael Eisner’s 14 year old son.  Kathy Magnum led the adaption of the ride to Walt Disney World.

Surrell notes that one of the changes to the Magic Kingdom version was to try to strengthen the coherence of the story, which was based on episodes and vignettes picked from various parts of the film Song of the South, by adding “Brer Frog as a stand-in for Uncle Remus.”

Maybe this helped, but I’ve certainly never been able to follow the story, or even hear clearly the song lyrics and the lines uttered by characters over the course of the ride.

Like most people, I’ve never seen Song of the South (a film a little too much of its time in race relations for Disney to be willing to re-release it) so I depend on the ride to explicate itself as story, and have never had much luck with that.

Does this matter?  Not in the least.  Although the incidents that unfold along the ride are mostly more picaresque than structured as a classical story, the ride has a clear beginning, middle and end, and a secondary (for some primary!) but dramatically supportive story arc built on the suspense of which drop will be the big drop!

All I can say is that it works, and is the absolute favorite ride at the Magic Kingdom of millions of people.

As a result, the ride is usually mobbed.

On hot days, the best times to ride are when the park opens or at night (at night for the views).

During cooler times of the year, because of the chance that you will get wet–you could even be soaked–it’s best to aim for a FASTPASS that will let you ride in the warmth of the late afternoon, or right before you leave the park. 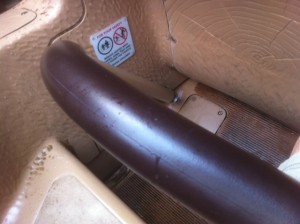 THE MOST RECENT CHANGES TO THE SPLASH MOUNTAIN

These have no effect on the ride.

There had been concern–given how popular the ride is–that the steps of deploying and checking the safety bars would lengthen the loading time enough to change the dispatch interval, cutting the ride’s effective ride capacity and yielding longer lines.

So far as I can tell–though only those with the data know for sure–this has not happened.  Lines seem no longer than before the safety bars were added.

My suspicion is that Splash Mountain is so long (ten minutes plus, far and away the longest Disney World “E” Ticket), so filled with ride vehicles, and so gated by drops before which the floating “logs” are held as needed to maintain safety intervals, that the effective capacity of the ride is governed by throughput–that is, the total time it takes a “log” to go through the ride–and not loading times.