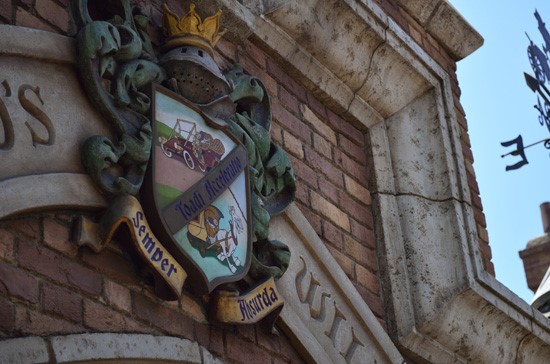 With Halloween right around the corner, some Disney fans may have forgotten that the original release of the classic The Legend of Sleepy Hollow was paired with another segment about a popular British character.

Mr. Toad’s Wild Ride was a classic “C Ticket” dark ride in Fantasyland that originated at Disneyland on opening day. Its doppelganger was also an opening day attraction at Magic Kingdom’s Fantasyland, but it closed in 1998 and was replaced by The Many Adventures of Winnie the Pooh, despite guest protests.

Mr. Toad’s Wild Ride’s story was a very loose adaptation from the Disney animated feature The Adventures of Ichabod and Mr. Toad (1949) focused primarily on Toad’s terrifying and irresponsible driving through London going “nowhere in particular”.

The Latin motto on Mr. Toad’s coat of arms is “Toadi Acceleratio Semper Absurda” (A Speeding Toad is Always Absurd).

Guests boarded turn-of-the-last century motorcars individually named for characters in the story. Each vehicle had a quarter horsepower electrical motor drawing power from the rail beneath it.

The Disneyland version was so highly popular that the Imagineers wanted to increase the capacity for the attraction, so unlike the California ride, the Florida ride had two separate tracks and boarding areas. Each track featured some different scenes.

Track One took guests through a library, a rural English barnyard with animals, a courtroom and jail cells with convicts. Track Two allowed guests to view Toad’s trophy room, a kitchen, a gypsy camp, Ratty’s house and Winky’s Tavern.

Both tracks took a spin through the town’s plaza, circling a fountain and eventually ended on railroad tracks where an approaching train sends the vehicle to “Hell”. The guests are greeted by gleeful, little red demons having pitchforks and tails, which was a scene not in the film itself but was included because of Walt Disney’s personal feeling that reckless driving should have consequences. Officially, the scene was labeled the “Inferno Room” referencing Dante’s Inferno.

Maintenance costs were minimal. The attraction could accommodate all ages, sizes, and any health conditions. In addition, the attraction was what was known as a “push-button” ride that could be operated by any Fantasyland attraction cast member with minimal training. However, it was a slow loading attraction and the effects quickly became out-dated.

Winnie the Pooh and his friends were enjoying a huge surge of popularity while guests did not remember the film inspiration for the Mr. Toad attraction at all and there was no Toad merchandise being sold in the park. On the other hand, Pooh related merchandise was selling more than Mickey Mouse and with the addition of an attraction those sales would only increase. With the Toad’s attraction double space there was plenty of room for an attraction and a gift shop. In 1997, Disney announced that a Pooh attraction would replace Toad.

A fan campaign was launched to “Save Toad” headed by John Lefante who urged sending letters and e-mails to the Walt Disney Company by the thousands. That campaign led to actual demonstrations at the attraction called “Toad-Ins” reminiscent of the well-known “sit-ins,” and they garnered media attention. Those reports led to even more supporters, but the attraction still closed as announced.

In the new attraction on the left wall of the scene in Owl’s house, there is a painting of Mr. Toad handing over the deed to the building to Owl and there is also a picture of Mole tipping his hat to Pooh. In the Haunted Mansion pet cemetery, up near the top is the Kevin Kidney Big Fig of Mr. Toad painted to resemble an oxidized, rusting grave marker.

Disneyland Paris was originally meant to have a ride version that would have been truer to the actual film with a different final scene that would have had Toad in a plane. It was never built but a Toad Hall restaurant (with an exterior similar to Disneyland’s revised 1983 attraction) did open.

Thanks, Jim!  And come back next Friday for more from Jim Korkis!

In the meantime, check out his books, including his latest, Disney Never Lands, about planned but unbuilt concepts, and Secret Stories of Walt Disney World: Things You Never You Never Knew