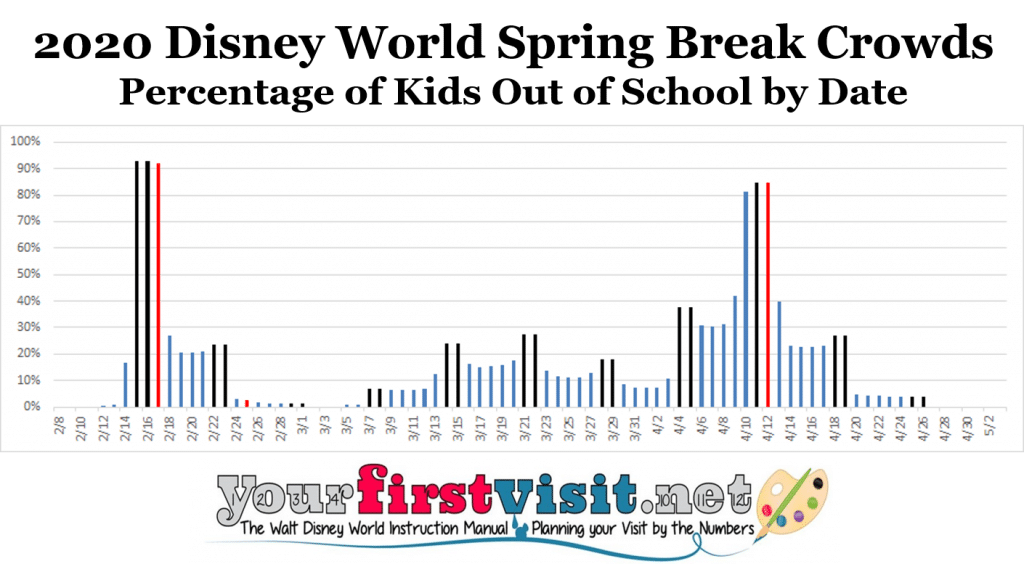 Easter 2020, on April 12, is a bit late in its possible range. President’s Day 2020 is about in the middle of its possible range on February 17. As a result, my latest analysis suggests heavy crowds March 14 through April 19, 2020–although some weeks are better than others.

A later Easter has a couple of different effects: first, it spreads out the dates of breaks for school districts that don’t frame their breaks around Easter, and second, if particularly late, sometimes will push districts that typically take the week after Easter off into the week before Easter instead, to keep from compressing their May academic calendars.

The effect of the various dates in 2020 is to compress the worst spring break dates into the period from March 14 through April 19.

Aggregated spring break calendars illuminate times when families with kids can particularly easily be in Disney World, but not their propensity to be there. Propensity factors range from the desire to get away from snow and ice to the willingness that more knowledgeable Disney World visitors may show to simply take their kids out of school—especially if doing so will avoid higher crowds on other dates. They also tell us little about people with no school age kids in their groups.

Can we get a hint of Disney’s own insights into propensity for people to visit from its own pricing patterns? Well, yes, but it’s not as straightforward as you might think.

TICKET PRICES AS A GUIDE TO SPRING BREAK 2020 CROWDS

Disney published 2020 ticket prices by first day of eligible use in late June 2019. Disney World’s current ticket pricing model is intended to a. push people from higher priced periods to lower prices periods to level out demand and improve experiences during what would otherwise be even higher-crowd periods and b. capture some value from increased demand from those people who go during higher priced periods anyway.

Thus in a profound sense ticket prices are a proxy for a crowd calendar.

But for thinking about spring break 2020 today, however, there’s three different reasons why you don’t want to read too much into current comparative ticket price levels.

First, price levels for 2020 published in June went up on average less than 2% compared to the same months in 2019. This tells you not that Disney has moved away from its aggressive price hikes of recent years, but rather that at least one more price increase is coming. Disney’s March 2019 update of the 2019 prices it first released in November 2018 included some profound shifts in pricing patterns and levels, especially for holidays, so you need to take differential 2020 ticket price levels currently present with a bit of a grain of salt.

Second, there’s a mismatch between the blockout dates in the annual passes most commonly bought by Florida residents and their actual spring breaks. Both gold and silver passes block out the weeks before and after Easter, but kids in Florida are largely not much on break then—about half have Good Friday off, a few have the Monday after Easter as well, but that’s their only time off during this blockout period. Rather, kids in Florida are largely on break in 2020 in March—about 10% the week of March 7, 50% the week of March 14, and 40% the week of March 21. In particular, almost all the kids on the I-4 corridor are on break the week of March 14. So folks with these passes are more likely to be in the parks March 14 through March 29—and especially March 14 through March 22–than the prices of regular tickets might imply. 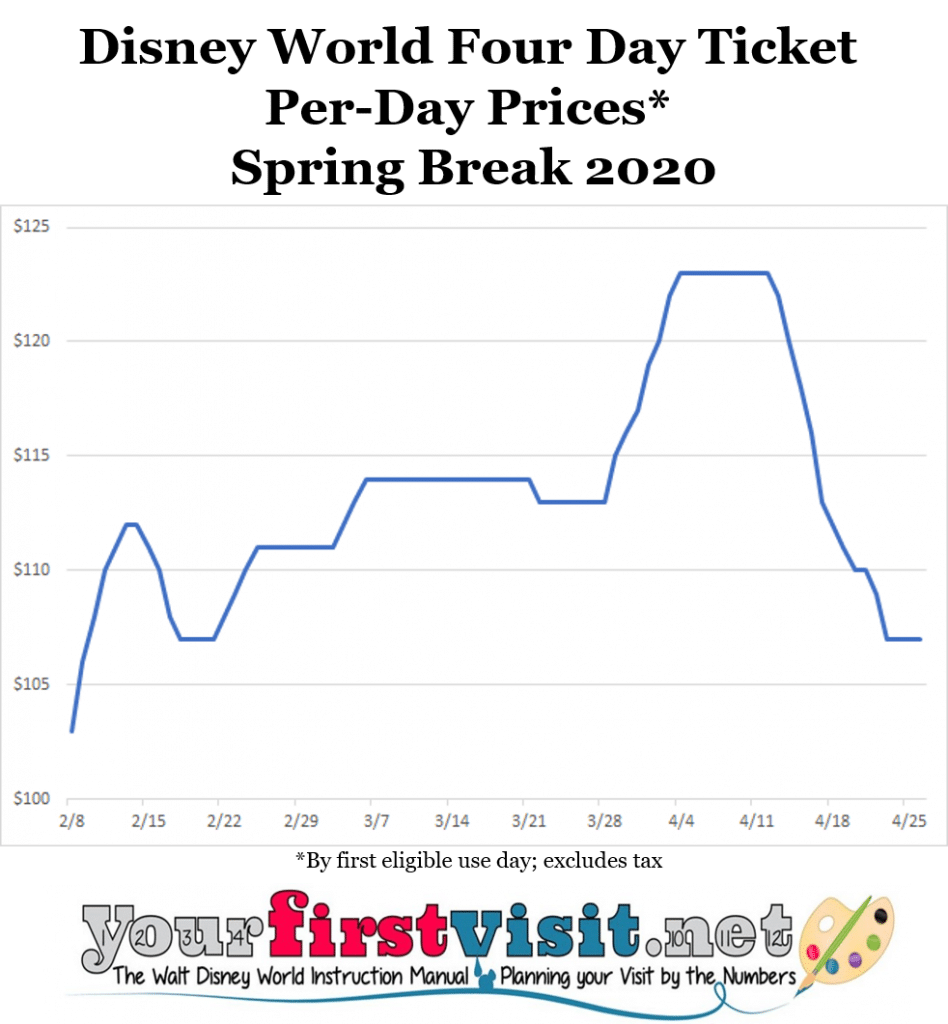 Finally, ticket price differences are meant not just to incent different dates but also to capture value from demand. So you will see higher prices during highly desired dates even if these dates don’t much tie to crowding patterns. Folks who live with snow, ice, and cold have an extra set of reasons to go to Florida in February and March. For example, in 2020, the old pattern of most of Texas being on break the same early week of March is broken—about half the state is on break the week of March 7 (the typical break week for most of the state in that past), and half the state is on break the week of March 14. But ticket prices both weeks are similar, suggesting that either Disney is pricing to capture the slightly lower-crowd attractiveness of the week of March 7—or that it has not yet caught on to the Texas change.

HOTEL PRICES AS A GUIDE TO SPRING BREAK 2020 CROWDS

Disney also varies hotel prices over the year (and much of the year, even over the week), principally by using different levels of rack rates, and also on top of that, discounts for specific dates.

But hotel prices, while being, like ticket prices, broadly correlated with crowds, especially in Disney’s lower-priced hotel offerings, are also not a perfect crowd calendar.

First, hotels have a fixed capacity in a way that parks don’t, and also a very different cost structure (with very few variable costs), so the business goal is different—it’s to maximize prices that also maximize hotel utilization. There is thus much greater payoff to running the hotels, via pricing, at about the same very high occupancy rate year round.

Second, unlike the parks, there is a broad range of substitutes for the Disney hotels—and with the expansion of 60 day FastPass+ and EMH access perks to the rest of the on-property hotels, and two nearby hotels (the complete list is here) some substitutes are much better choices than they used to be. So it is as valuable to compete to fill rooms from guests who would stay at non-Disney resorts as it is to shift demand among the Disney hotels in time. In fact, it may be more valuable to compete for non-Disney property guests, as this keeps money out of the pockets of competitors, and reduces their ability to fund enhancements.

Finally, the different hotel classes see starkly different seasonal competition. The deluxes in particular compete with non-Disney hotels that see a ton of convention and meetings business much of the year. When the convention and meetings business collapses every summer (smart meeting planners don’t book conventions and meetings in the summer in Florida*), many more rooms are available to the tourist trade—and prices at this whole class of hotels collapse. The values, in contrast, don’t compete for this business, and their demand cycle is driven by family vacations. This is why Disney value resort prices in later July 2020 are 30-40% higher than the lowest of the year, while deluxe prices those same dates are just 5-10% higher. 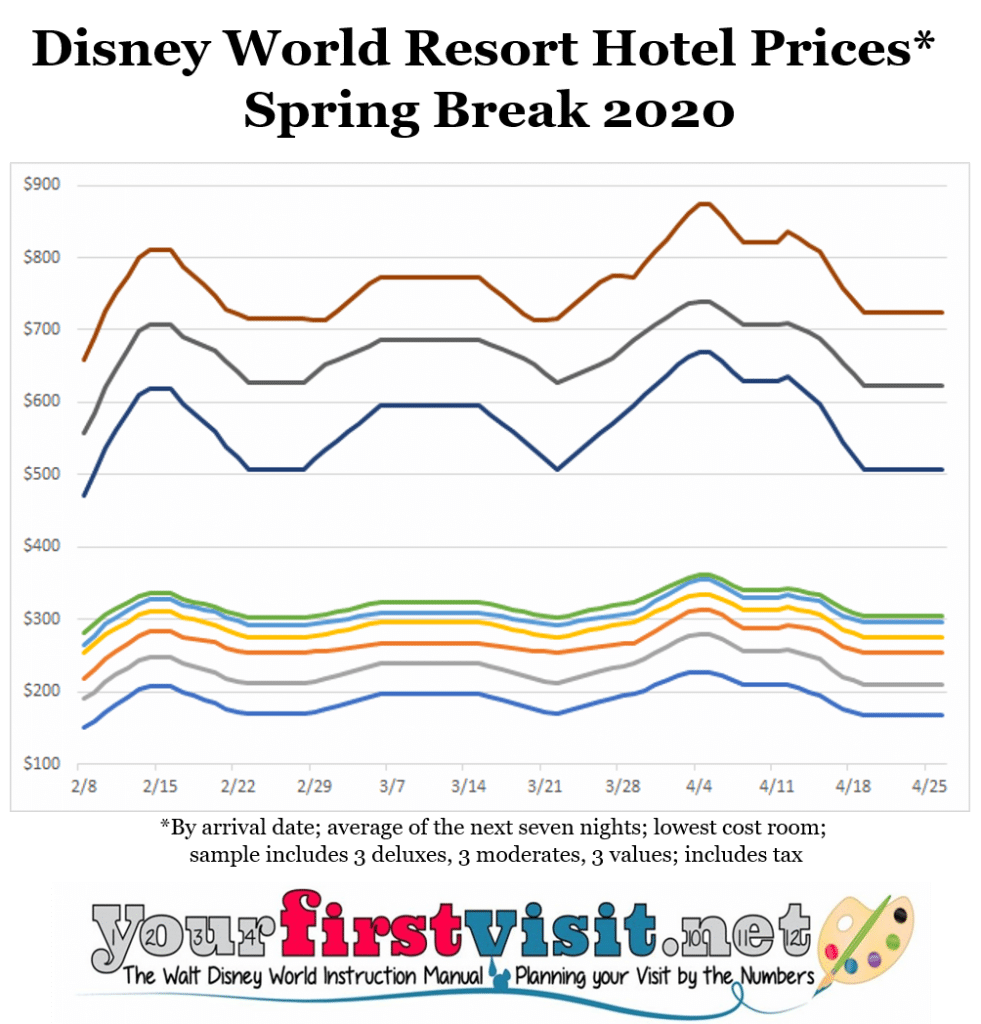 A really big convention—like HIMSS in Orlando March 9- March 13 2020—can drive up prices across the entire market before, after and during the specific event. (This includes even lower priced hotels, as people get forced into booking them by there not being enough business class rooms in town to meet demand. This increased demand lets the lower-priced hotels raise prices as well.) The week of March 7 at Disney World, while not great, will be better than hotel prices imply—Texas is only half there, and HIMSS is driving hotels, but (not much) park visits.

So while Disney World hotel prices are indeed down the week of March 21st compared to the weeks before and after (ticket prices are down a bit as well), I am not seeing that necessarily meaning this will be a great week. This may be just a correction based on weak local convention bookings that week.

The week of 3/28 is an even trickier week. Both hotel and ticket prices are high, but relatively speaking, compared to weeks before and after there aren’t many kids on break—and next to none in Florida. I am going to make the call on it that it’s a moderate plus week in terms of crowds, but this is the forecast I am least comfortable about this period—it could be moderately better or a little worse.

*Groups wanting to do their events on a budget will go to the north in the winter and the south in the summer, to get the best prices—but the reason they can get the best prices is because there is so little competition for meeting space and hotel rooms.