(For the first page of this review of the Villas at Disney’s Grand Floridian, click here.)

You can see the basics of all three of the most common room types at the Villas at Disney’s Grand Floridian Resort & Spa from a Two-Bedroom Villa. 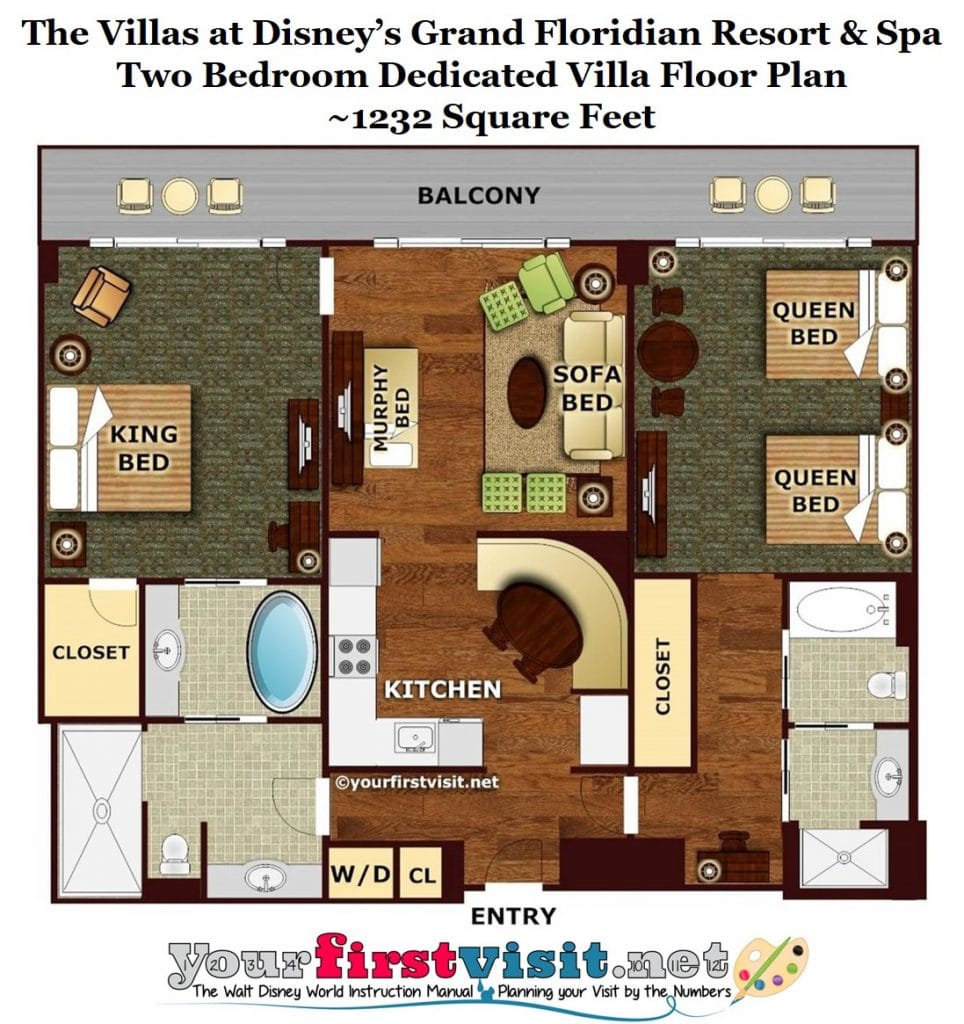 This is because a Two-Bedroom Villa combines

In some cases the room similar to a Studio actually is a Studio, connected to the space that’s otherwise a One-Bedroom Villa via a locking connecting door–these are called “lock-offs.”

In others, the space was designed from the start as a Two-Bedroom–these are sometimes called “Dedicated Two-Bedroom Villas,” and so the layout of the second bedroom is slightly different than that of a Studio.

Both my stays at the Villas at the Grand Floridian were in dedicated Two Bedrooms, so all the photos are of a “second bedroom,” not a studio. I’ll comment on the differences between the second bedroom and the Studio as I go.  I haven’t stayed yet in a pure studio, so these comments come from studying the studio floor plans, plus some of the comments I’ve gotten since my original review of these spaces.

I’ll start with the second bedroom/studio, go from there to the master bedroom, and finish the photo tour in the combined kitchen/dining/living space. 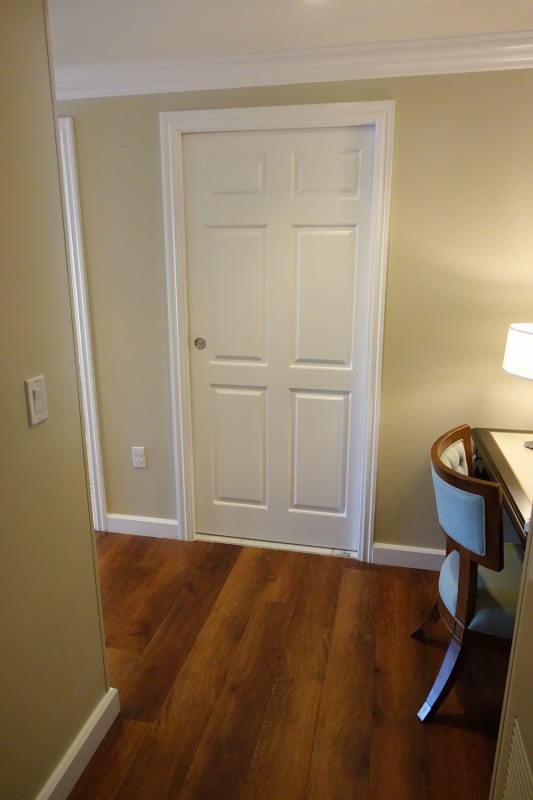 In dedicated two bedrooms, the second bedroom is accessed from the main entry hall of the villa. On the floor plan, this image is from the entry , turned right toward the hall that leads to the second bedroom. Studios connect to lock-off One Bedroom from the same spot. 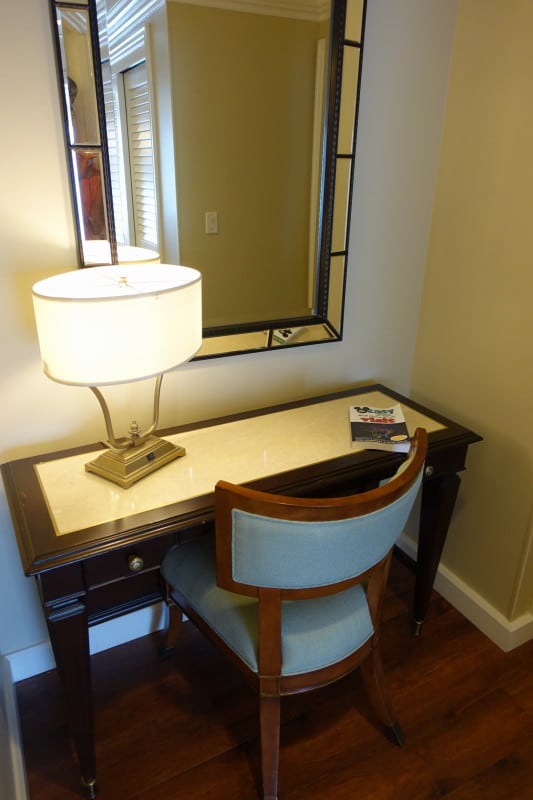 As you go down this hall, on one side you’ll find a desk. In the studios, you’ll find here instead an entry door to the main public corridor. 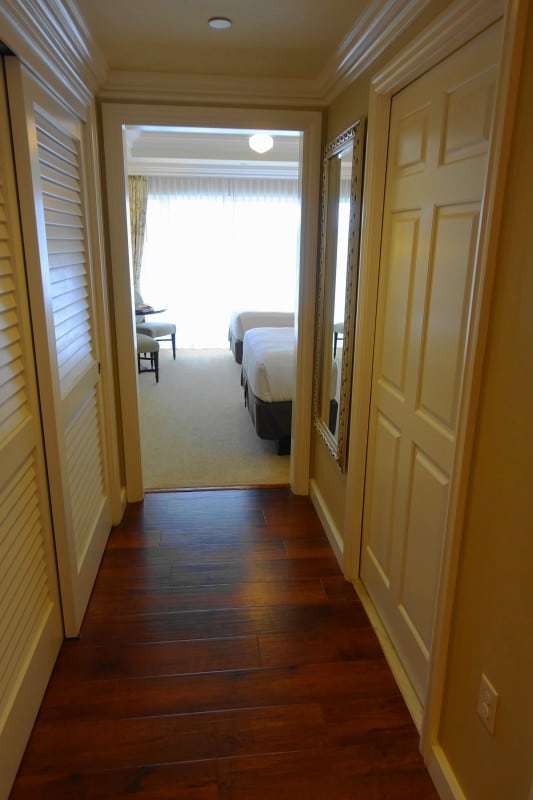 Beyond at an angle is another hallway leading back to the bedroom area, with the closet on one side and the bath on the other. 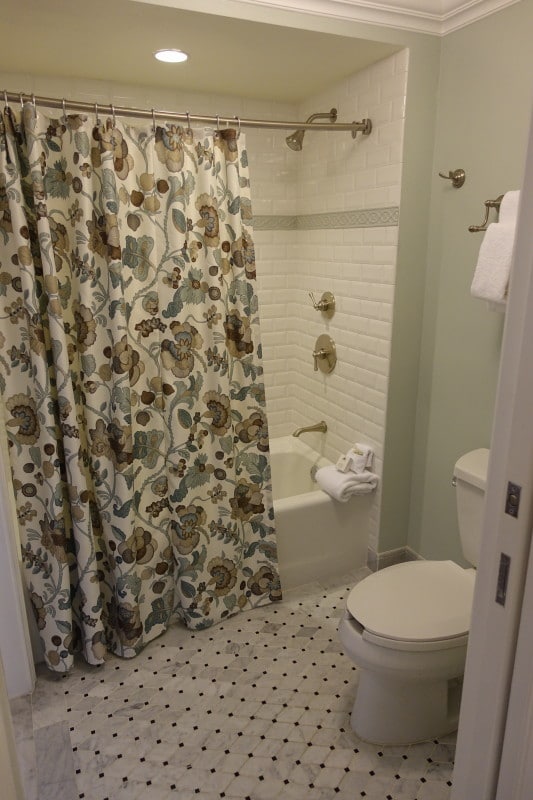 There’s a couple of innovations here.

First, instead of one bath space being entered from the other, there’s two doors to the hallway–one to the toilet/tub shown above, and the other to the other part of the bath. These two spaces are also connected internally by yet a third door, so these spaces are remarkably flexible. 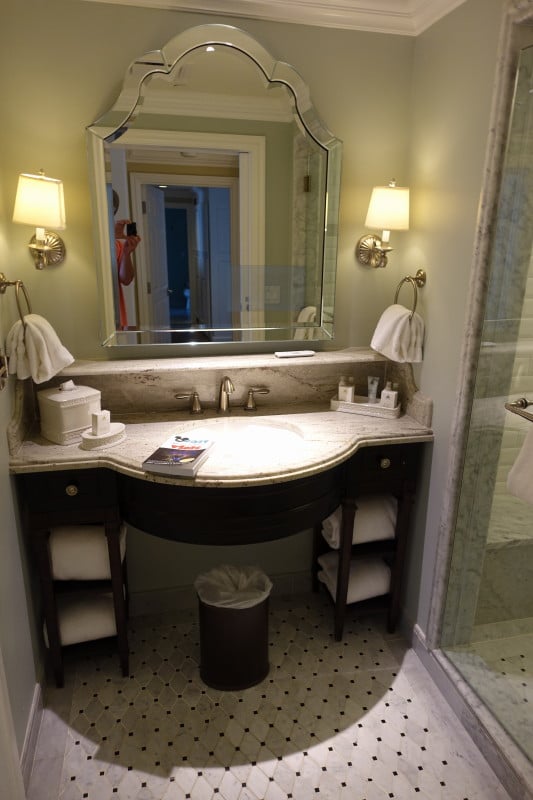 The other innovation is that the other part of the bath has not only a sink, as is typical… 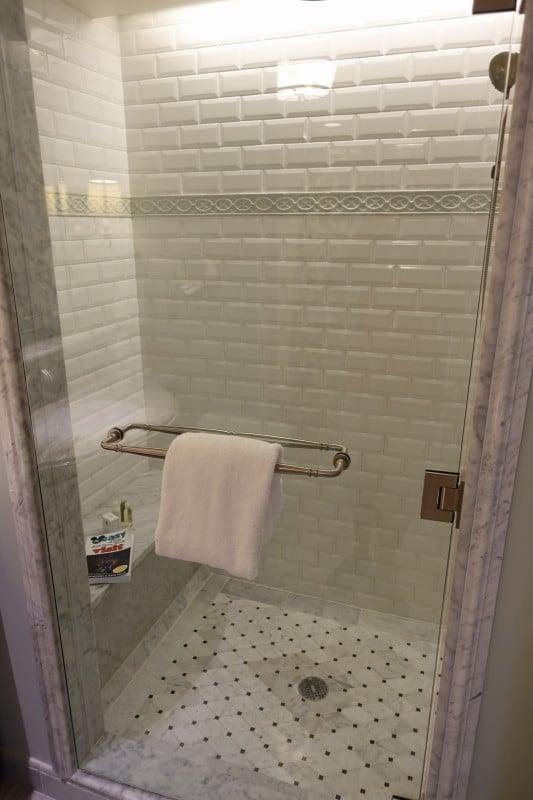 …but also a second shower, which is not. These are the most well-appointed and flexible baths you’ll find in a Studio or second bedroom except in the Studios at the Polynesian Village. 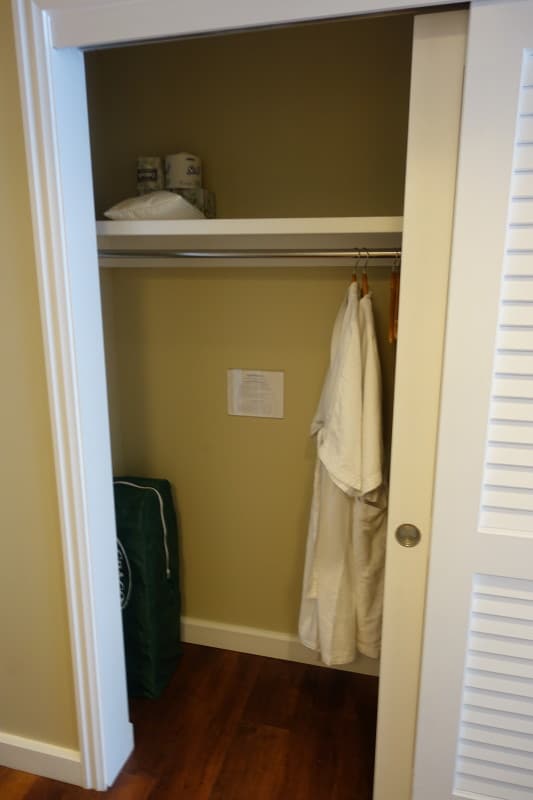 Back in the hall, on the other side from the baths in a dedicated two bedroom you’ll find a large closet–above is the half closer to the entry… 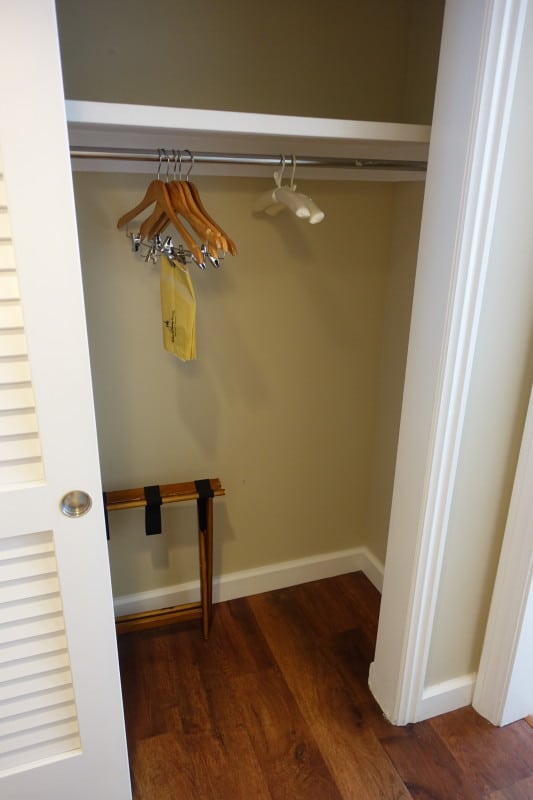 …and here’s the second half.

In Studios–and thus in lock-off Two-Bedrooms–things are a little different here.

Instead of the second closet area, you’ll find here a microwave, mini-fridge, and another sink. So families staying in a Studio or lockoff do get the second sink back that’s not in the bath–and those staying in a dedicated Two Bedroom can always send the kids (or dad…) to brush their teeth at the kitchen sink! 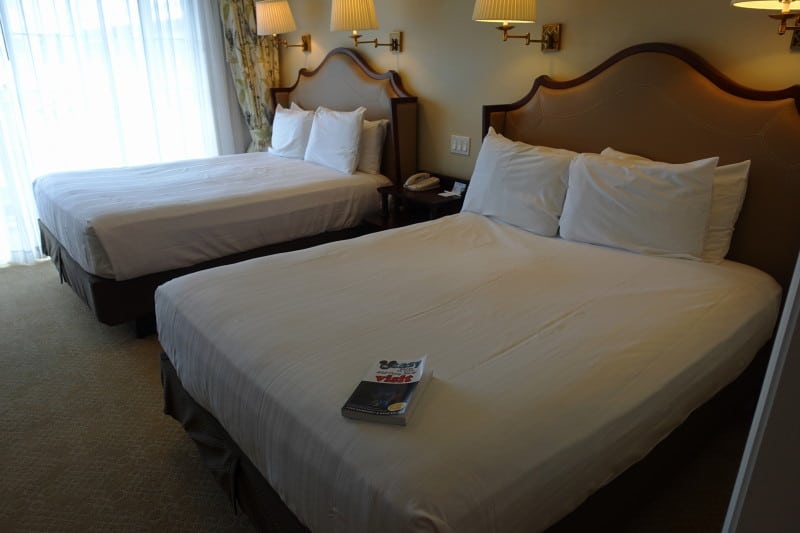 Further back in the main part of the room, you’ll find in the dedicated Two Bedrooms two queen beds on one side. 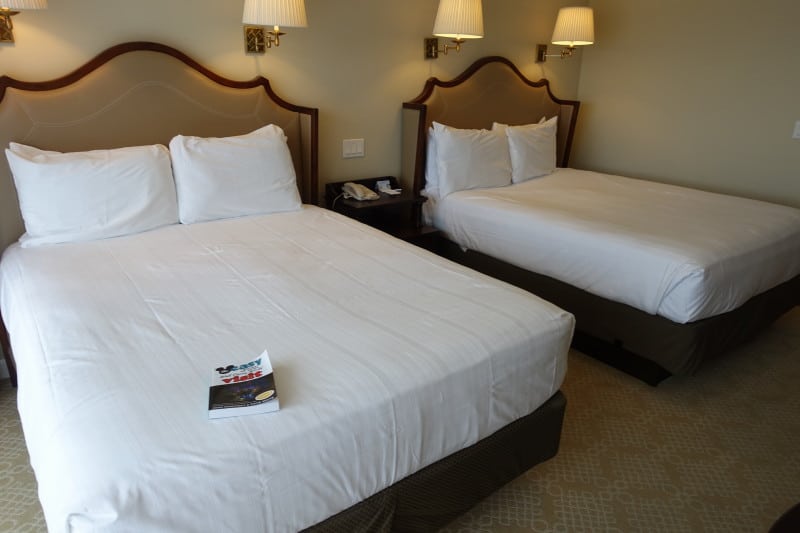 The beds from the back of the room. 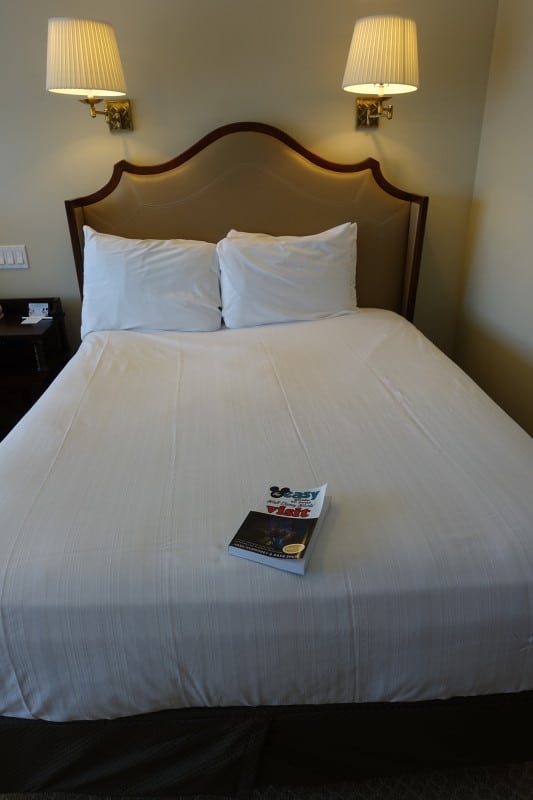 A closer view of one of the queens.

In Studios and lockoffs, the further bed is replaced by a couch that folds out into a queen. The couch adds flexibility…but the regular bed is more comfortable. 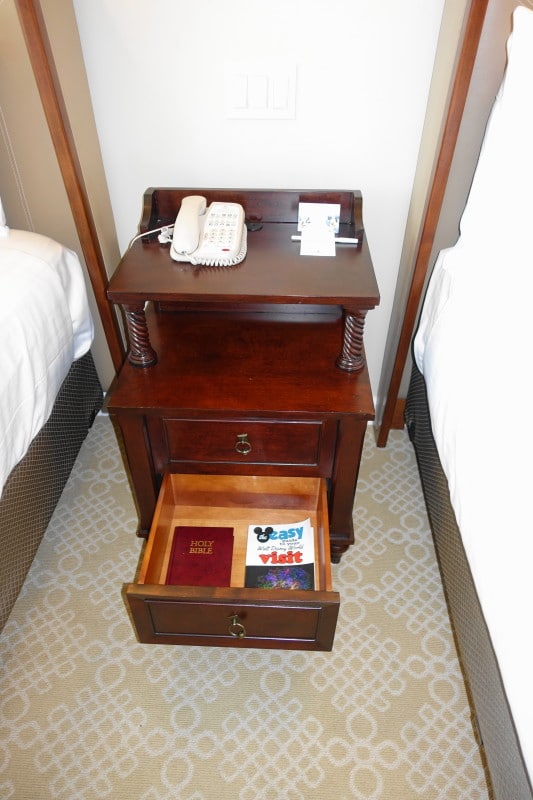 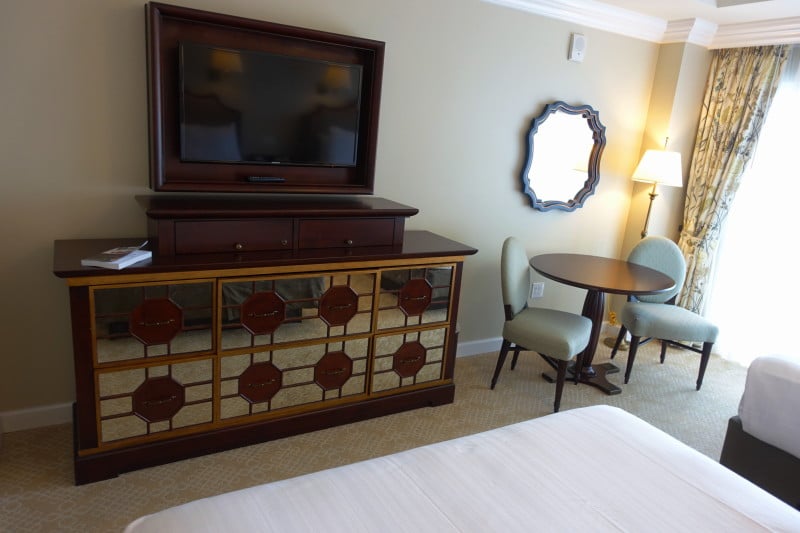 On the opposite side of the room you’ll find a small table and chairs and an object with a TV on top. 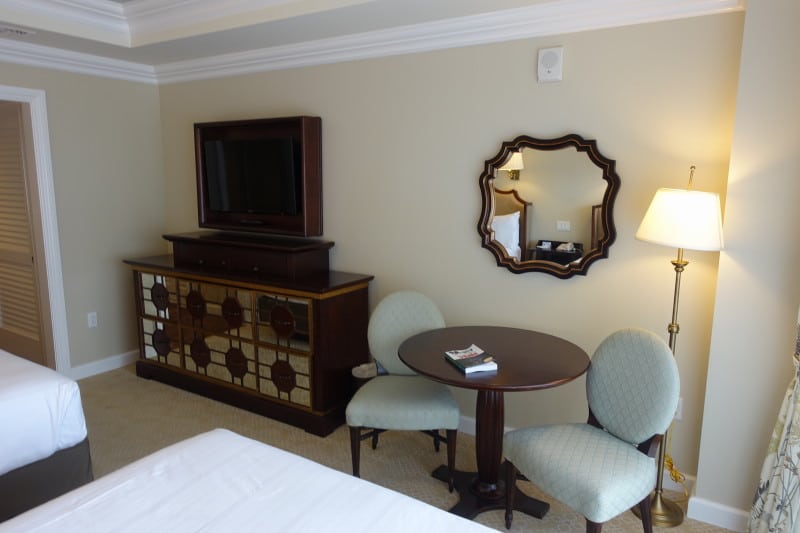 The TV side of the room from the back. 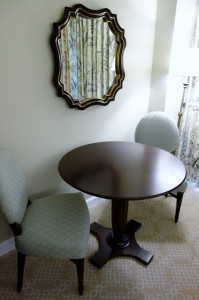 The table and chairs are nothing special…

…but the object holding the TV is. 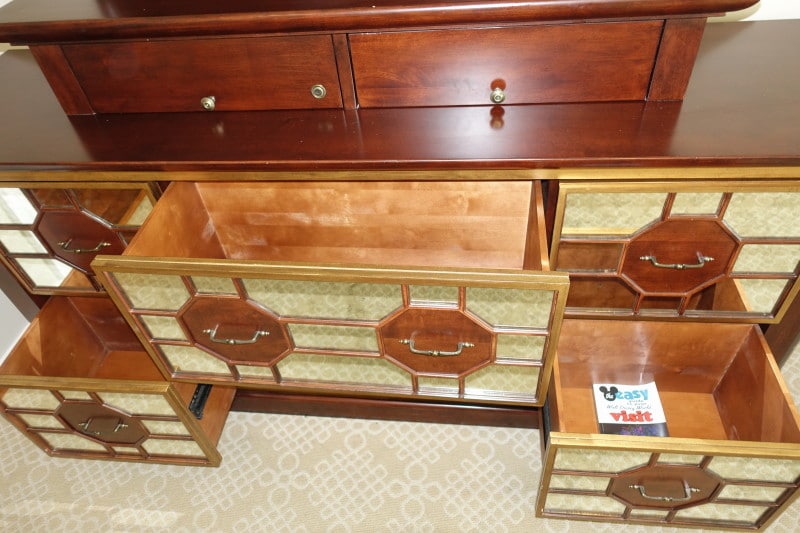 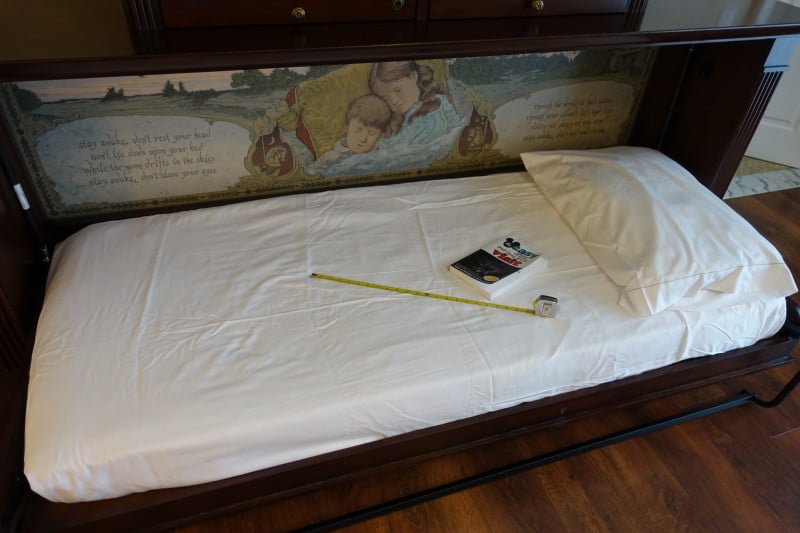 In the Studios and lock-offs, instead you’ll find under the TV a fold-down Murphy bed. I measured the same bed from the living room of my villa as 72 inches by 32 inches. A standard twin is bigger than this, and although there’s 77 inches clear between the framing elements, I found at my own 71+” that the bed did not work well for me.

Cushioning was fine–I measured the cushion as being more than 5 and a half inches deep.  Rather, the issue was my feet hanging off the end and banging into the bed framework. I suspect, though, that this bed will be just fine for anyone 5’6″ or shorter…

Because of the Murphy Bed, these studios sleep five.

Moreover, because the lockoffs have two of these Murphy Beds (one in the Studio/second bedroom, one in the living room) you have ten sleeping spots in 6 individual beds, really adding flexibility to sleeping arrangements.

On the other hand, a Studio has only half the closet space as the Two-Bedroom of a dedicated unit. Some of the drawer space lost from the Murphy Bed is made up for in Studios by drawers built into the frame of the queen bed. 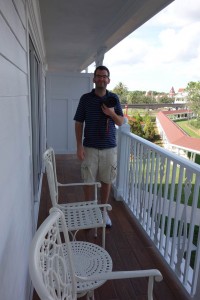 The final component of these rooms is the full-width balcony. (That’s not me; it’s Josh from easyWDW, who came by to check out my digs.  You can tell it’s him because he’s funny, and I’m not.)

Dedicated units have a single long balcony covering all bays of the villa; lockoffs have a separation between the Studio and other balconies.

previous post Announcing the First Ever Joint yourfirstvisit.net and Magical Mouse Schoolhouse Fan Meet Up!
next post Next Week (November 30 Through December 8, 2013) at Walt Disney World