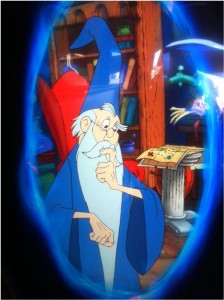 SORCERERS OF THE MAGIC KINGDOM

The game begins in the Fire Station just inside the Magic Kingdom, and to the left.

Here you’ll see a training animation inside a magic window, get instructions from a cast member, surrender your ticket, and be given it back.

You’ll get as well a map of magic windows, directions to your starting point, a key card for you to use to activate other magic windows, plus five spell cards to use vanquishing villains trying to take over the Magic Kingdom. 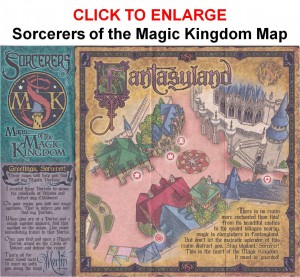 There’s about 20 magic windows in total, scattered across the Magic Kingdom except Tomorrowland and most of Frontierland.

See the image, which shows Fantasyland.  Sorcerers windows are marked by the orange circles.

Overall, Sorcerers of the Magic Kingdom is a very minor adventure.

Given the 20 windows, about 80-100 families at a time can be engaged in a window, waiting for a window, or walking between windows–a tiny addition to the Magic Kingdom’s entertainment capacity.

Moreover, the impact of the game, slight as it is, is lessened by the fact that you’ll usually find yourself waiting at a window for another group to finish, and hence see what’s coming up before you need to deploy your spells.

So why did Disney World bother?  My guess is that the game is a beta for NextGen technology, and a precursor of potential places for personal recognition.

SORCERERS OF THE MAGIC KINGDOM: A TEST OF DISNEY WORLD’S ABILITY TO FOLLOW YOU AROUND? 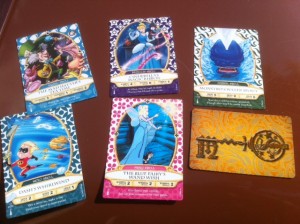 Remember how this game starts: you surrender your park ticket, and get in return not only spell cards but also a key card you use to activate the magic windows.

My key card is in the image at the lower right.

NextGen is meant to do a couple of things when it deploys.

One thing is that it will “personalize” a Disney World experience–for example, at various points and places, you and your family will be greeted by name. 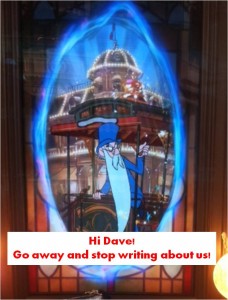 For this to happen, there has to be a tool to show you a greeting, and a technology to recognize that it’s you.

My guess is that this is what is really going on with Sorcerers of the Magic Kingdom.

The windows provide a place to install the howdy messages, and the key card–linked to you through your park ticket–perhaps provides a way for Disney to test its ability to “see” and recognize you as you travel about.

I wouldn’t be surprised if there were more “key readers” around beyond those in the twenty magic windows, serving as additional test points to see whether the keys can be tracked.

This in fact may be why there’s no magic windows in Tomorrowland or most of Frontierland…perhaps this is where the additional test points are located. 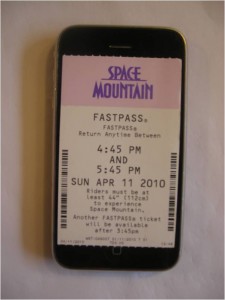 Most people think that the NextGen recognition tool will be a wristband.

I still vote for it being a dedicated Disney-provided smart phone (see my sophisticated mock-up), because of its two-way communication and geo-location capabilities.

…but maybe it will be a beefed up key card, after all.