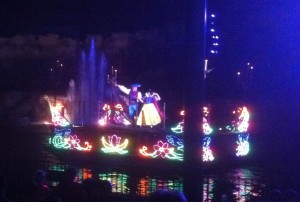 Fantasmic is a 25+ minute evening fireworks (and more) show in that takes place in the Hollywood Hills Amphitheatre at Walt Disney World’s Hollywood Studios theme park.

Without giving the show away, the Fantasmic follows a dream of Mickey Mouse about good and evil.

Fantasmic is probably my favorite thing at Walt Disney World, and certainly is my favorite at Disney’s Hollywood Studios.

Because this high regard is shared by many, it is listed as a favorite on this site’s Comprehensive Guide to Rides.

Disney has a package where if you eat at certain restaurants at Disney’s Hollywood Studios at certain times, you get a reserved seat for Fantasmic.

Check the Hollywood Studios Calendar (find your month, then click on the days of your visit) to check when Fantasmic is being shown during the time you will be at Walt Disney World.

HOW TO CATCH A GOOD SEAT FOR FANTASMIC

You will be directed by a cast member to a certain area for seating, and will have little opportunity to sit other than where they direct you.