Note:  to enter a Disney World theme park, you need not only tickets, but also a park reservation for that day.  Also, ticket prices went up a few percent in February 2022, and I have not yet updated this material to reflect that increase.

Disney World theme park ticket prices vary based on how many park days they are purchased for, as they always have; prices now also vary depending on the first day of use they are eligible for. Moreover, both prices and eligible use dates can vary depending on which ticket type you buy, and even how you buy them.

So you now have to make four decisions before buying your tickets:

There are two bits of good news here. First, you can add features to a not-yet-expired version of one of these tickets, so if you start with a six day base theme park ticket, and then decide halfway through your vacation that you really needed an eight day Park Hopper ticket, Disney World will allow you to pay the price difference to upgrade your base theme park ticket. So the risk of buying too little ticket is low. Second, you have me to guide you through the process!

To actually purchase a ticket, you have to know answers to all four of the questions above. But, because almost everything can be seen as a variant of the base “1 Park Per Day” theme park tickets, I’ll start with that, and then build on it.

Note that in a recent change, until further notice, to enter any specific park (except for park-hopping, see below), you will need both a valid ticket, and a reservation for that park that day. For more on the reservation system, see this.

WHAT IS A “1 Park Per Day” DISNEY WORLD THEME PARK TICKET?

What Disney calls “1 Park Per Day” tickets—which to save a tree I will call “base tickets”—are tickets good for one park per day for between one and ten ticket days.

On any base ticket day, you gain unlimited entrances and exits to one single theme park during its regular operating hours. So on one day you can go to Magic Kingdom, leave and return, and on a different day you can go to Epcot, leave, and return again. You can go to any one park on any eligible day until you hit the limit of the number of park days you bought.

What you can’t do with base tickets is go to two different parks on the same day—for that you need the Park Hopper add-on, discussed below. For any given ticket length and eligibility period, base tickets are the least expensive tickets available to the general public.

WHAT OTHER DISNEY WORLD TICKET TYPES ARE AVAILABLE?

The “Park Hopper” add-on gives you the ability to visit more than one park in a day. Returning visitors commonly enjoy the extra flexibility that Hoppers give them, but I counsel first-timers to only add them after they are sure they need them. Each Disney park takes more than a day to see, and travel between parks can take longer than first-timers might imagine.

In a new change, park hopping can only happen at 2p or later, and only after a guest has already entered a reserved park earlier that day.

The “Water Park and Sports” add-on to base tickets adds the ability to visit the Disney water parks Blizzard Beach and Typhoon Lagoon or the minor venues on property, including mini-golf before 4p at Winter Summerland or Fantasia Gardens, a round at the 9 hole Oak Trail golf course, or admission to the ESPN Wide World of Sports complex. You get a set of minor visits to these venues equal to the number of days of your base ticket, so a three day ticket gets three additional minor admissions, and a seven day ticket, seven admissions. This add-on costs a flat fee of $74.55 for any length of ticket, and is a good value for visitors who would have attended at least two days at the water parks anyway.

The “Park Hopper Plus” option is an add-on to a Hopper ticket—you cannot add it to a base ticket. It combines the benefits of a Park Hopper add-on with those of the Water Park and Sports add-on. This add-on costs a flat fee of $21.30 per ticket. Returning visitors planning multiple visits to the minor venues—especially the water parks—can gain real value out of this add-on, if they had already planned to buy a hopper. First timers generally will gain more value by focusing any extra time they have either on rest or on the theme parks, rather than on the minor parks.

The main other option available to everyone is Annual Passes, of which there are various types, which provide unlimited entry to the parks over most or all of 12 months.

Narrower populations—most significantly Florida residents, visitors from the UK, and members of the US Armed Forces—can often find different or special offers. Check the Disney World website for eligibility, prices and terms of these.

HOW SHOULD THESE DISNEY WORLD TICKETS BE BOUGHT?

So if you are also planning to book a Disney-owned hotel room, in many cases it will be best to purchase your tickets as part of a package; if you are purchasing three day or longer tickets separately, buy them online.

WHAT ARE THE ELIGIBLE USE PERIODS OF THESE DISNEY WORLD TICKETS?

Base, Hopper, and Hopper Plus tickets must have their first day of eligible use identified before you can purchase them. Except for one day tickets, which must be used that exact day, these tickets come with varying usage windows—that is, for example, you don’t have to use a four day ticket on four precisely consecutive days. This lets you fit in days off, visits to other Orlando attractions, water park visits, etc., and lets you roll a bit with family or weather issues.

Base and Hopper tickets not purchased as part of a package have the following usage allotments: two and three day tickets get two extra days for use; four through seven day tickets get three extra days; eight through ten day tickets get four extra days. So if you buy a four day ticket whose first day of eligible use is May 3, 2022, you can use this ticket any four days of the seven day period that begins May 3 and ends May 9.

Water Park and Sports and Park Hopper Plus tickets get one additional day of use—making it easier to fit the water parks or mini golf into your visit. So the four day ticket in the above example would be usable through May 10.

WHAT ARE THE PRICES OF THESE DISNEY WORLD TICKETS AND HOW DO THEY VARY?

If you buy Base, Hopper, and Hopper Plus tickets, the price of the tickets will vary based on the length of the ticket, whether it is for someone ten or older or three to ten years old at the time of their visit (kids younger than three are free), and when the first day of eligible use is.

Prices per day typically go down with longer tickets compared to shorter tickets with the same first eligible day. While the new date-based pricing means how much they go down will vary over the year, typically the least expensive days to add are days six through ten, each of which costs on average over 2022 on average $20 per day to add, with a range of around $5 to $50 a day to add a day. Adding a day to one, two and three days tickets cost an arm and a leg. Adding a day to a four day ticket is in between.

Tickets for kids three to nine cost ~$5 to ~$25 less per ticket than tickets for those ten and older, with the larger savings applying to longer tickets.

More profoundly, the ticket price also varies depending on the first start date. In the longer ticket lengths—five days and longer—in 2022 prices for tickets of the same length vary over the course of the year on average about $175—that’s a $700 difference for a family of four. See the table for the price range by length for base tickets. 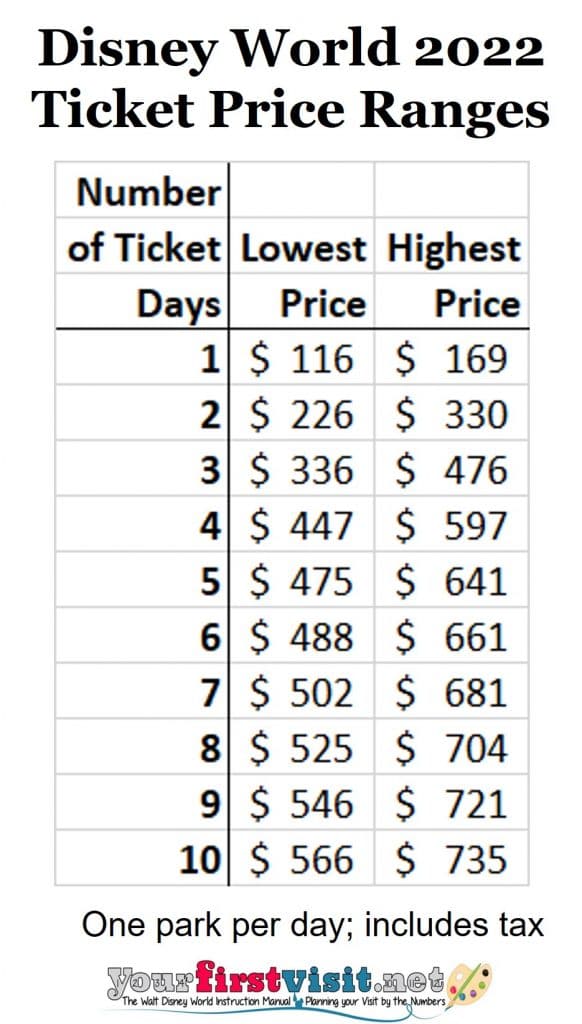 Basically, tickets are more expensive during the times when it is most convenient for families with school-age kids to go, so they will be typically higher during holiday periods, common vacation periods, and over weekends. Shorter tickets see the highest differences between low and high priced days, as much as 45%; longer tickets see a range of 30 to 35%.

The most expensive tickets are during the popular vacation periods in March and April before and after Easter and after October 1,  especially the Christmas holidays. The least expensive tickets are during the common semester-beginning periods of a few days into January through early February, and especially later August through most of September. Prices also go up for ticket dates that include other holidays and various Disney special events.

To see exact prices for your potential dates go to Disney’s website here and select your ticket type. From there a monthly calendar will open. After you first select the number of ticket days desired, the calendar will show you the average daily ticket prices by first day of eligible use for every day for which ticket prices have been released. These prices are rounded, and pre-tax, but will illuminate for you the various prices for various possible start dates.

If you have many potential dates you could visit, then the chart below might be helpful for honing in on the lowest ticket prices during the periods available to you. It shows the rounded average price per day for every start day from January 1 through December 31, 2022 of four different ticket lengths—four (blue), six (orange), eight (grey), and ten days (gold). (I selected this subset because if I included all ten possible ticket lengths, it would be a mess, and I do care about you.)

WHAT FIRST ELIGIBLE DAY SHOULD BE TARGETED FOR THESE DISNEY WORLD TICKETS?

Because usage periods for all ticket lengths greater than one day are longer than the number of ticket days, and because average daily prices can be different from day to day, some may find ticket savings by picking as their first eligible day a date somewhat earlier than the first day they plan to be in a theme park.

Note that this won’t work if you are buying a package—if you have a package, your first day of eligible use will be set as the day you check in to your hotel.

WHAT’S THE PRICE TO ADD A DAY TO DISNEY WORLD TICKETS?

Back in the olden days—that is, before October 16, 2018—it was pretty straightforward to figure out the extra cost of a ticket a day longer. Adding a sixth through a tenth day cost a flat $10.65 per ticket per day.

Now that prices vary so much over the course of the year, you can only know for sure the costs of adding days by comparing tickets of varying lengths with the same start days. On average, the cost to add days six through ten is around $15-25 per day.