Space Mountain has been an icon at the Magic Kingdom at Walt Disney World since its 1975 opening.

After its recent refurbishment, it continues to be so, and in the top rank of Walt Disney World rides.

It is consistently one of the two most popular rides in the park (Splash Mountain is the other) and is rated in this site’s Comprehensive Guide to Rides and Attractions as a favorite for everyone third grade or older.

Space Mountain closed in April 2009 for what was thought to be a major refurbishment.  But then the recession happened, and it re-opened in November of 2009 with only minor changes.

These minor changes, however, add up in total to a real plus of the ride.  As a result, it remains a highly recommended ride for first time visitors!

Returning visitors will notice changes at every point of the ride, which tell the story better, and enhance the ride experience itself. 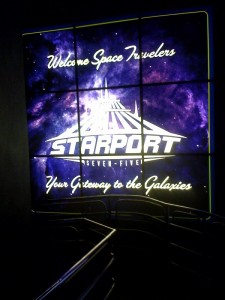 The line now includes visuals intended to note Space Mountain’s place in the intergalactic transportation system* (including Disney’s four other Space Mountains around the world.)

The left line–usually reserved for standby visitors–now has simple interactive games to play.  These were not operating when I checked out the ride earlier this week.

(Users of this site following its guidance on when to go, and its advice on itineraries at the Magic Kingdom, won’t be in line long enough to play these games much. These games are also not available on the right line–the line usually reserved for FASTPASS returns.) 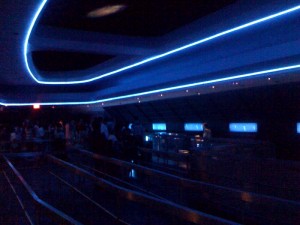 The loading area has been covered. This results in the ride itself being more of a surprise to first time visitors, and, more importantly, darker.

Text guidance as to what is happening (“Check Invisible Oxygen Dome”) have been added to both the loading area and the staging area, improving the sense of story.

The rocket sleds are largely unchanged, but the seats are much more comfortable, and the fluorescent stripes are gone–part of the “make it darker” effort.

The ride itself is almost identical to its old layout, but the added darkness from the enclosure of the loading area makes it even more mysterious.  Moreover, the stars are brighter, and the color projections–nebulae and whatnot–are much more punchy.

The post-show area has been largely redone.  It is still largely a waste of space, but the changes are now kitschily reminiscent of the advertising one would see in an airport (spaceport?) arrival area.  This improves the story compared to the old installations in this area.

The added darkness has been widely commented on, and is a real, though subtle, improvement.

What I like most about the renovation, however, is the addition of story elements.  This is what Disney does best, and it’s nice to see all the story that has been added to Space Mountain.

*You may also note its place at the nexus of Magic Kingdom transportation, incorporating within yards of each other not only its own rockets, but also the Walt Disney World Railroad, the PeopleMovers of the Tomorrowland Transit Authority, and the little cars of the Tomorrowland Indy Speedway.