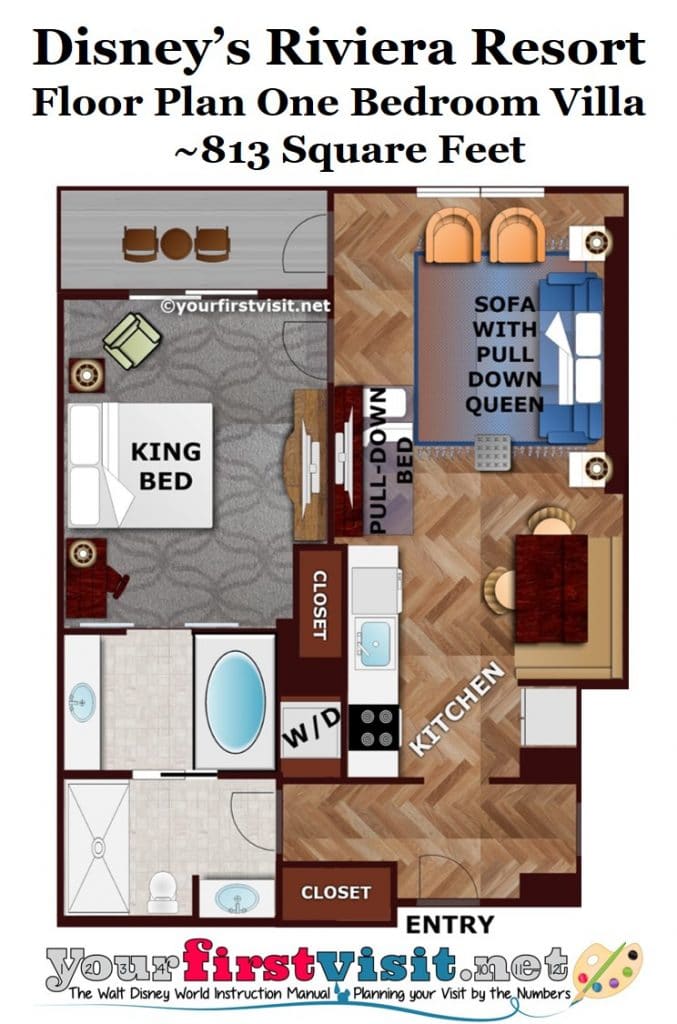 The master bedroom, or king bed, side of both One and Two Bedroom Villas at Disney’s Rivera Resort is the same.

Taking layout cues from the Villas at the Grand Floridian, the king bed area at Disney’s Riviera Resort is accessed at one end from deep in the living room. The bath associated with the space is then divided, with a sink and soaker tub closer to the bedroom, then a full bath with a large shower that is also accessible from the villa’s entry. 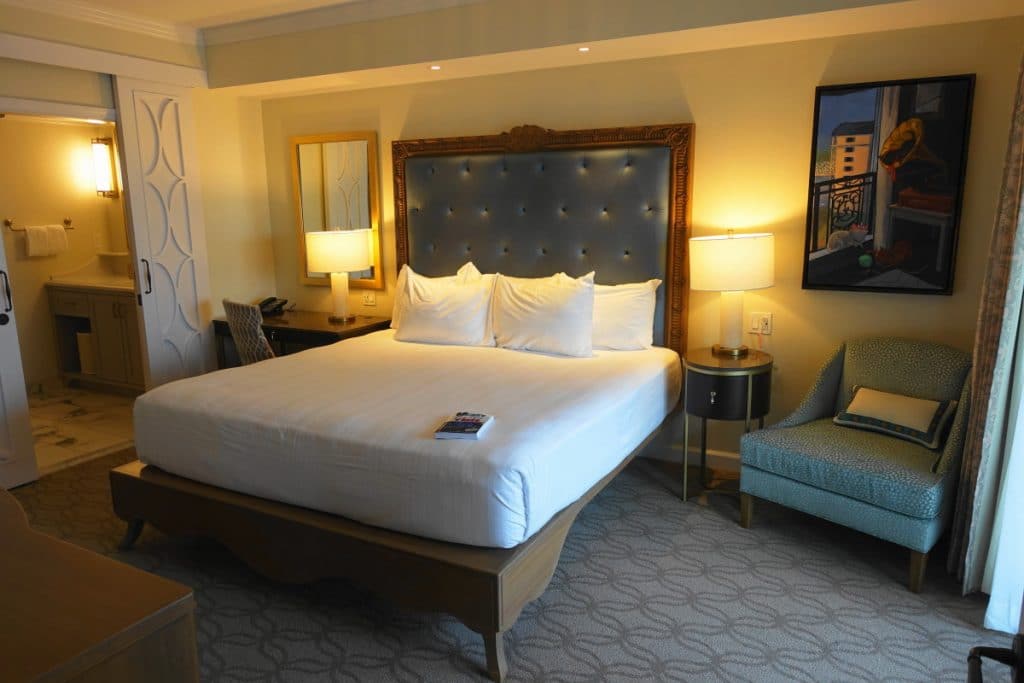 Here’s the king bed side from near the entry from the living room. 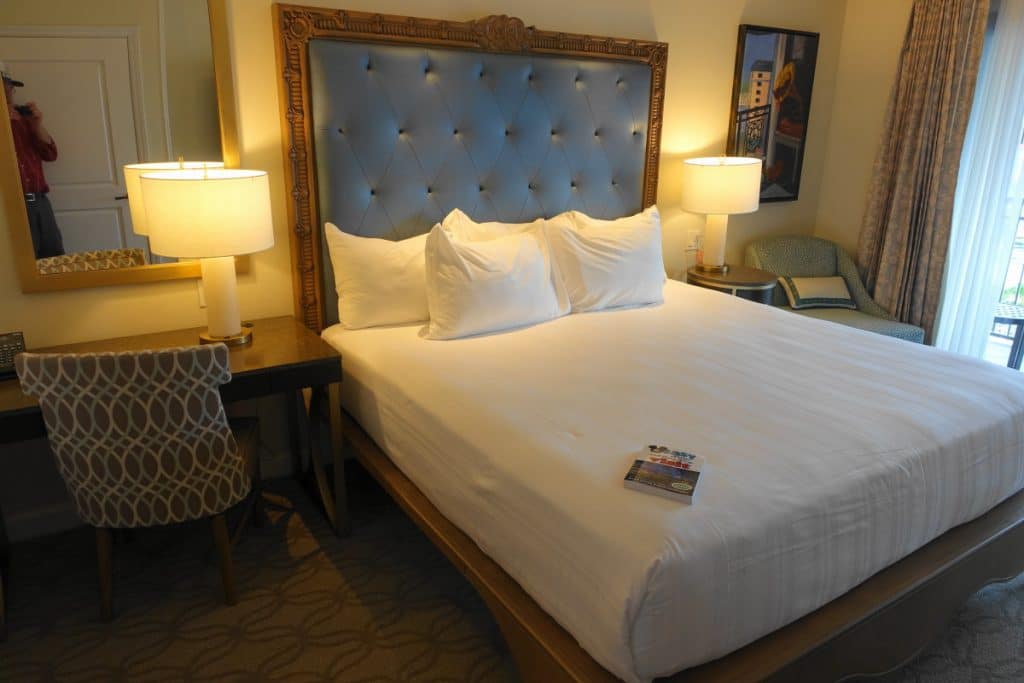 The king bed side from closer to the bath. 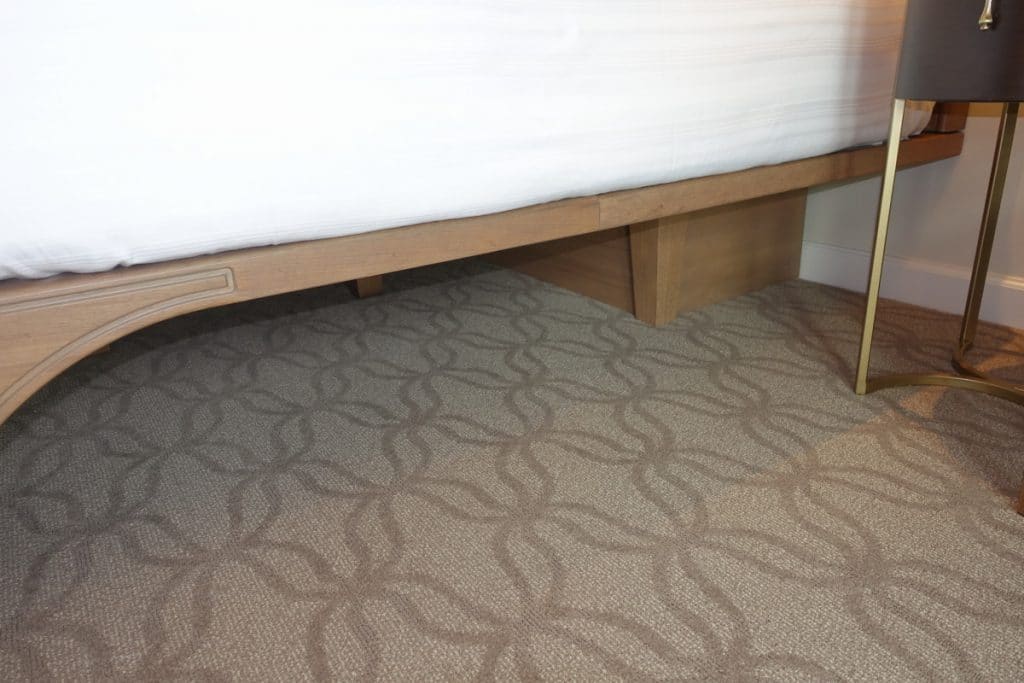 As had been the case in all recently re-done Disney rooms, the bed is a single mattress on a platform… 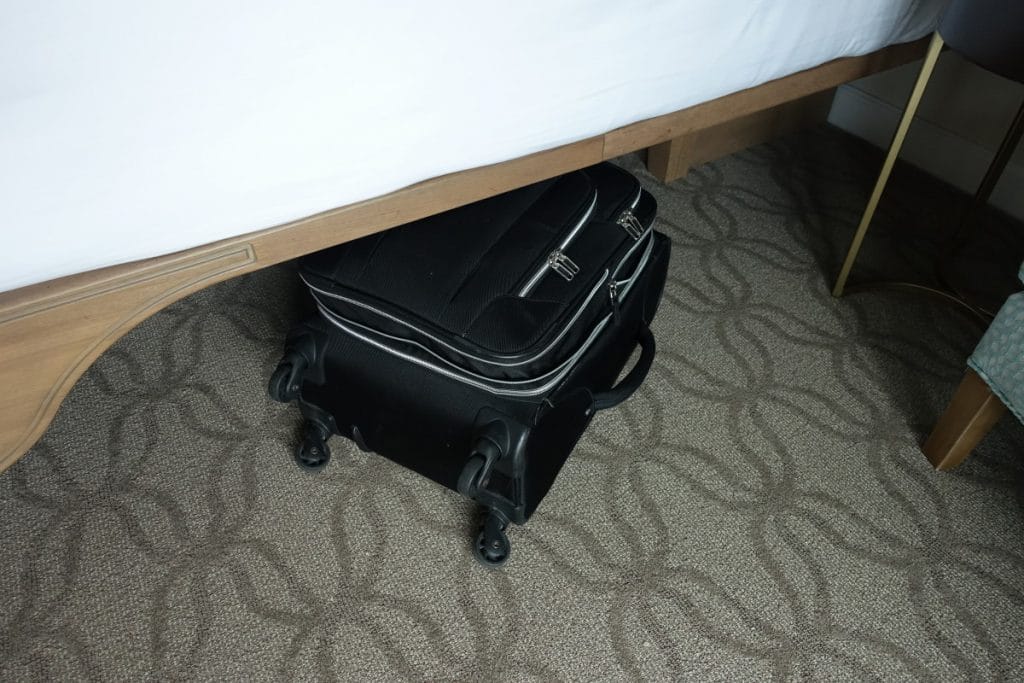 …with room underneath for luggage storage–not that you’ll need it; these villas have more closets than pre-Stonewall New York. 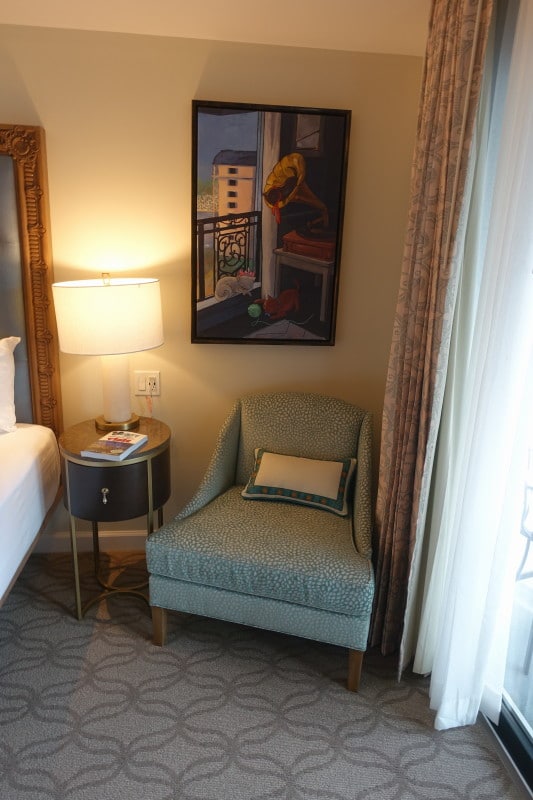 Next to the bed are this bedside table with power behind, and an easy chair… 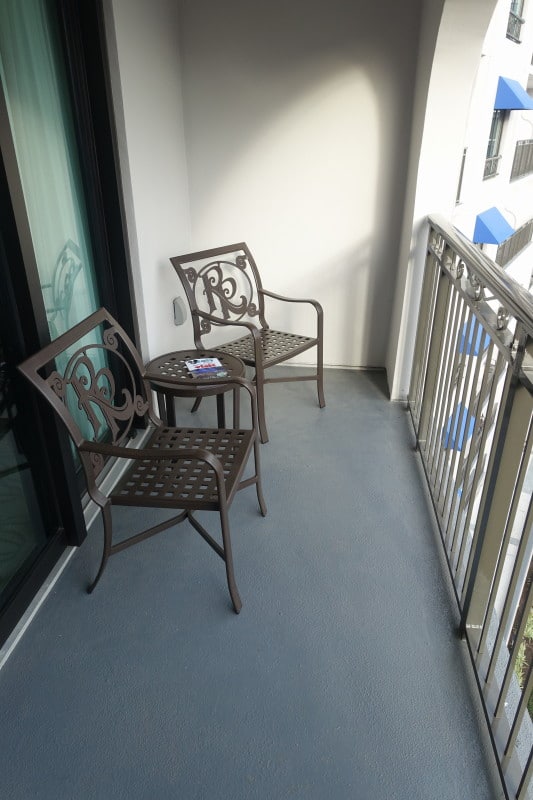 …and just outside is a balcony, also accessible directly from the living room. 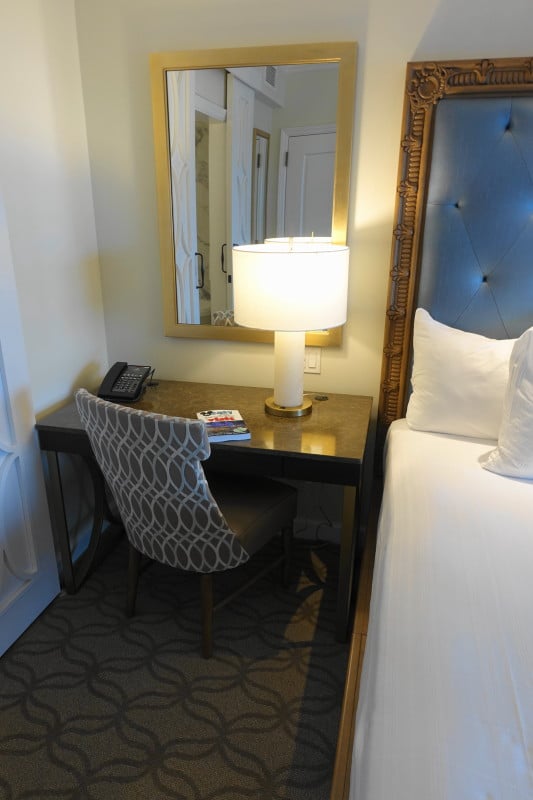 On the other side of the bed is this large desk with power. Its size lets it also function as the bedside table for this side of the king bed. 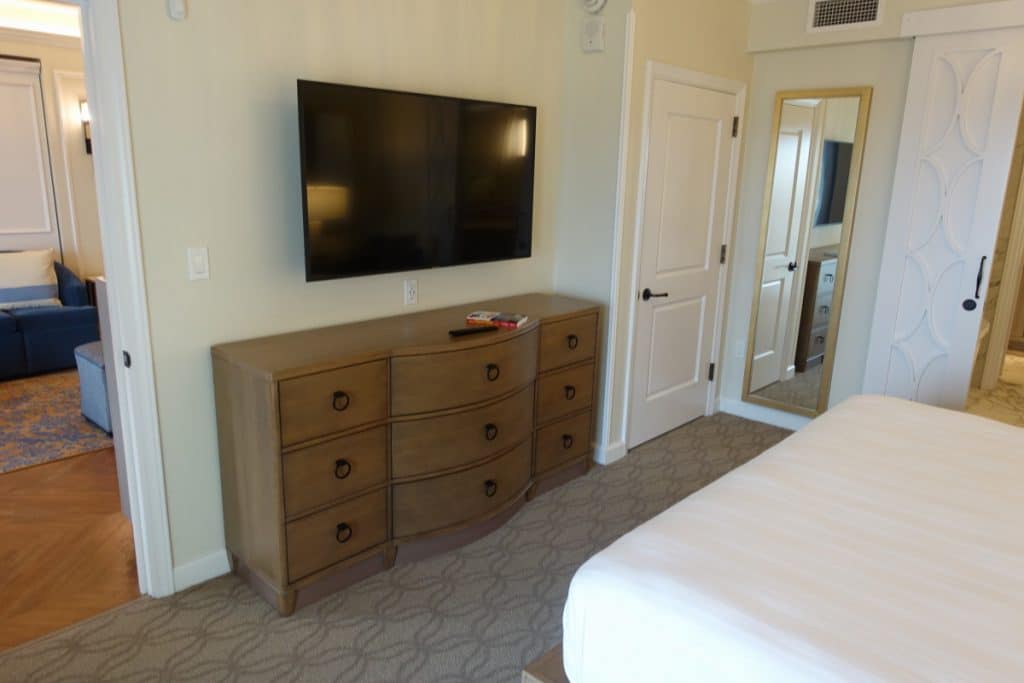 The TV side of the room includes a dresser with a 54” TV above, and a closet. 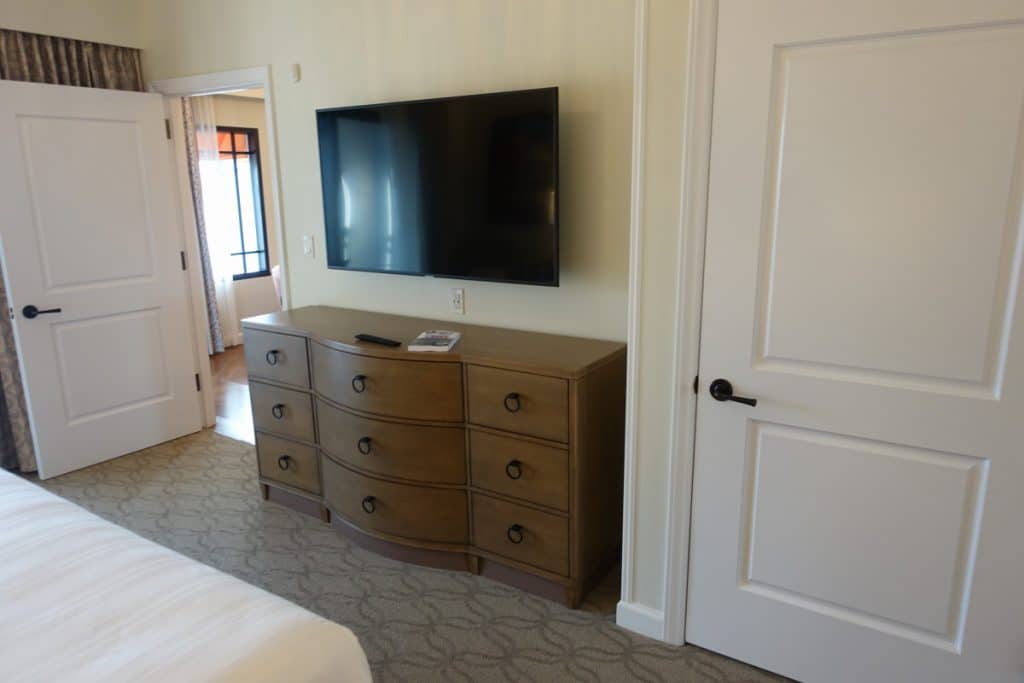 The TV side from the bath end of the room. 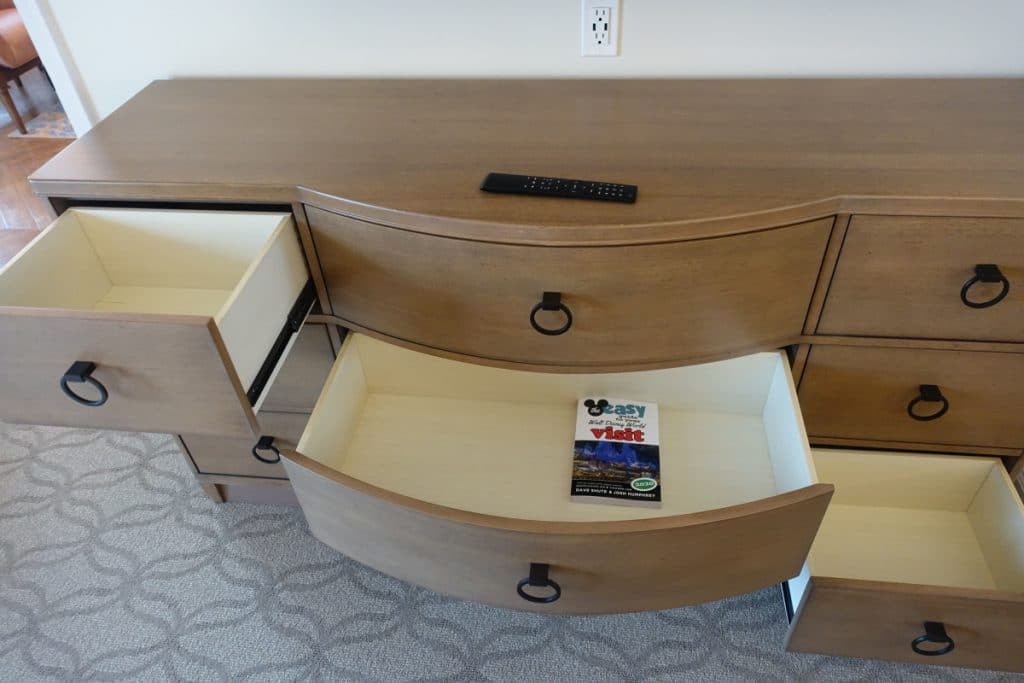 The nine dresser drawers have plenty of storage. 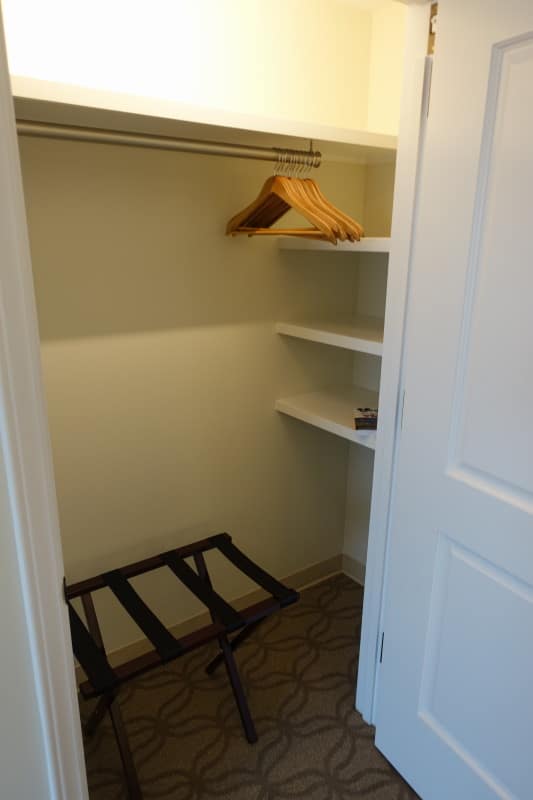 From the outside, the closet looks oddly proportioned, but it actually grabs some space from the kitchen
wall on the other side and ends up with correct dimensions inside. 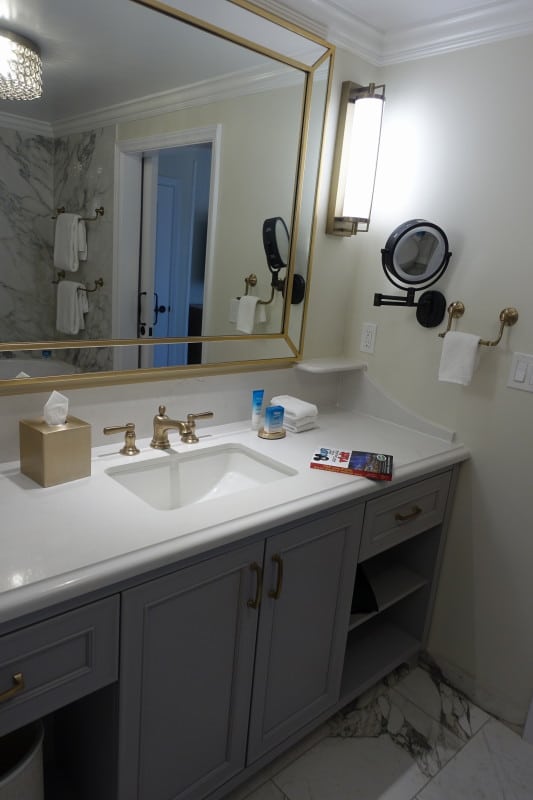 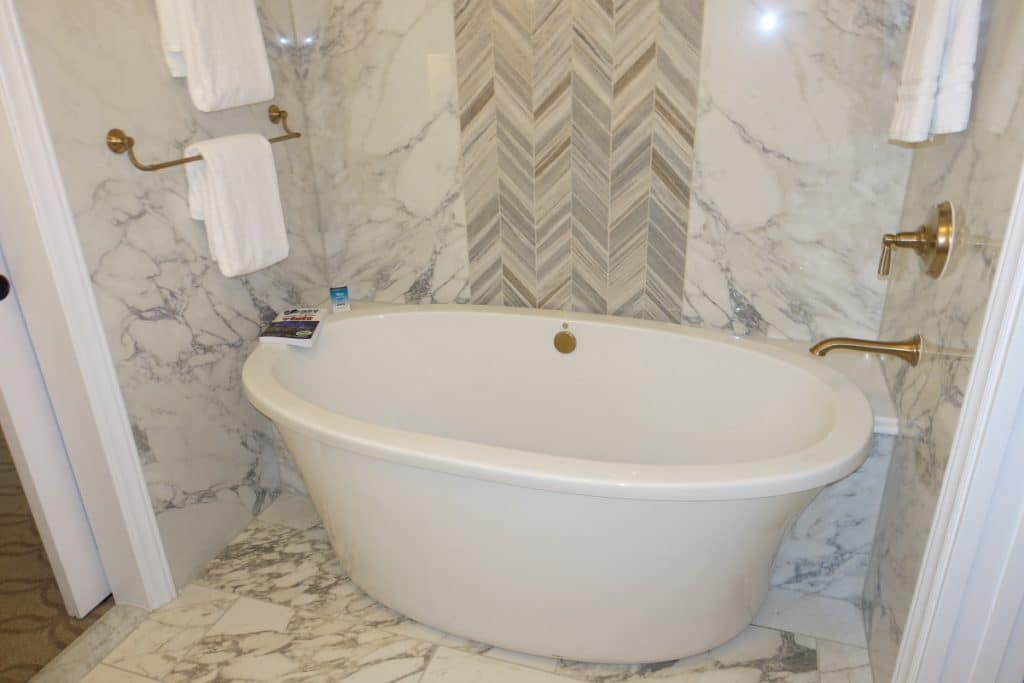 …and a large soaker tub with spray jets in its base on the other. 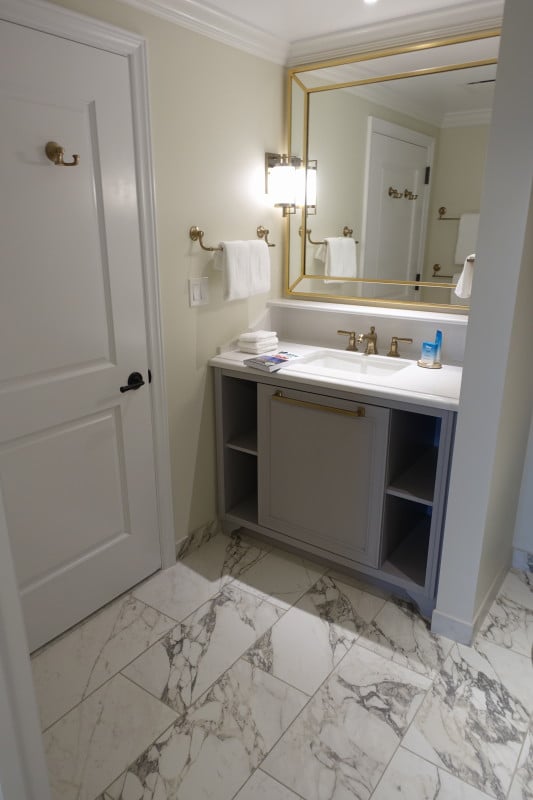 The second part of the bath is a full bath that’s also accessible from the rest of the villa. It includes a sink… 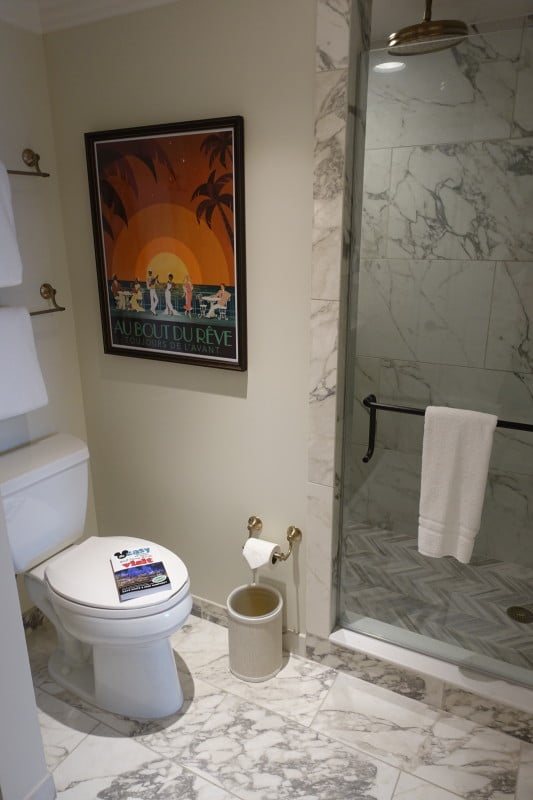 …and a toilet and shower. 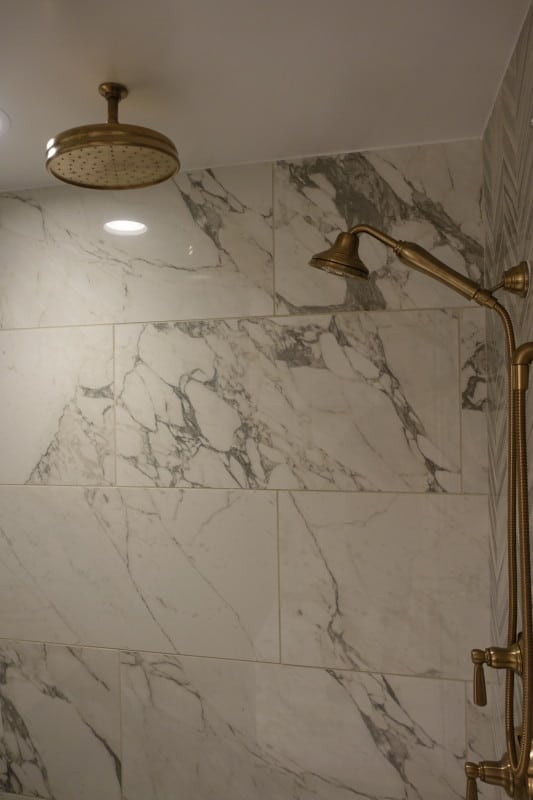 The shower is large and has both rainfall and regular heads… 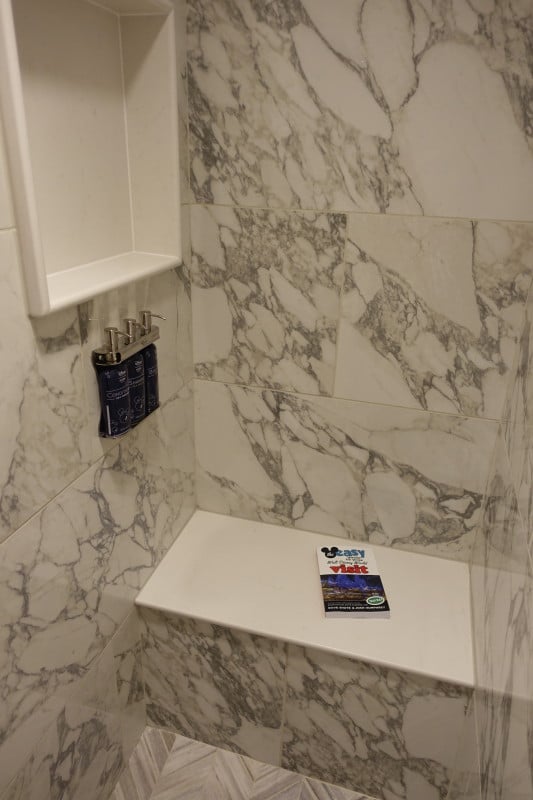 …and includes a seat at the back—along with in-wall toiletry bottles. 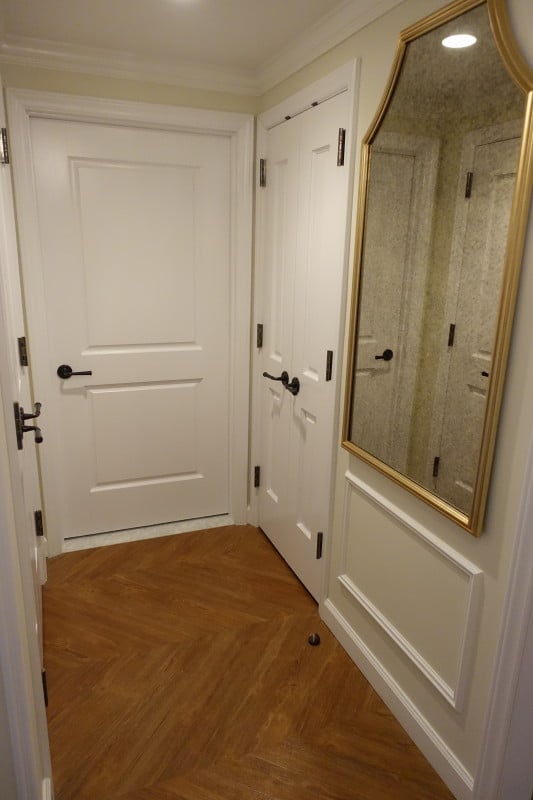 The hall from the entry to this bath has some important stuff, too—the image is shot from the entry, with the door to the bath directly ahead. On the left is a closet, and on the right, behind a set of doors, is the washer dryer. 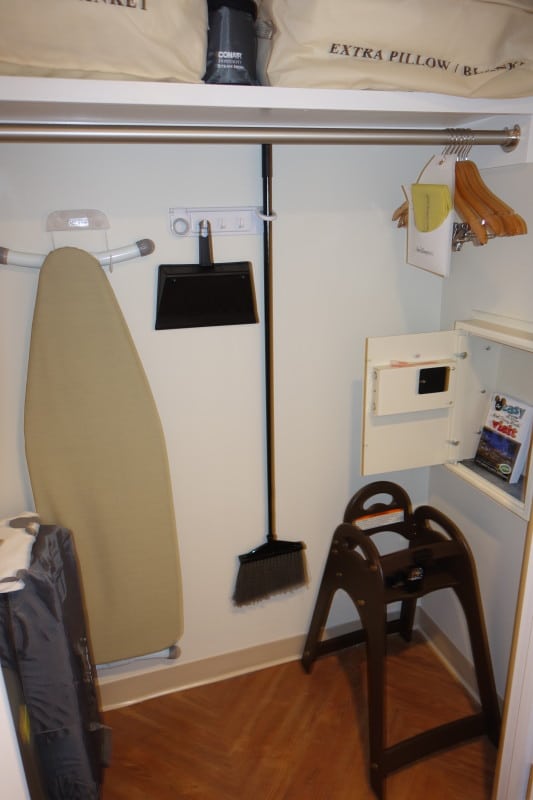 The closet serves as the coat closet for everyone in the space, and the clothing closet for people sleeping in the living area (dedicated Two Bedroom Villas have an additional smaller closet, near the entry to the two-queen area). Note the soft focus, adding to the romance of the closet… You’ll also find in this closet spare linens for the living space beds, a vacuum for anyone who misses cleaning,* and a safe. 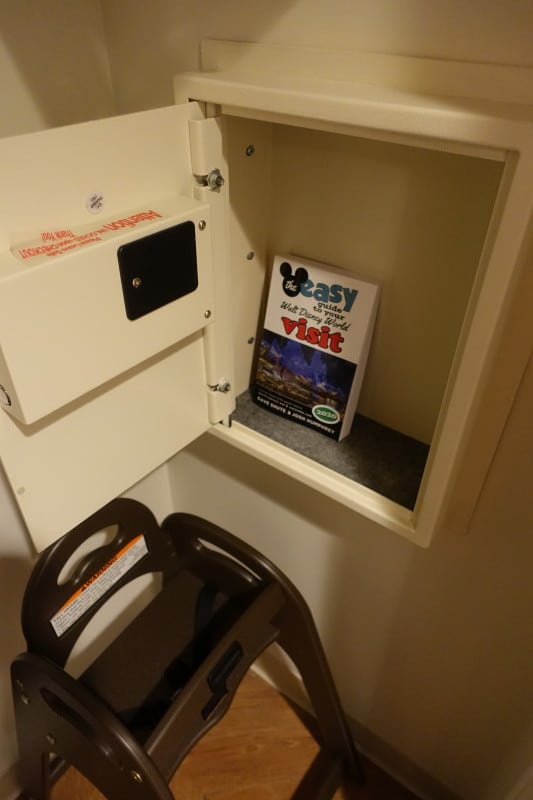 The safe is quite large—my book is six inches by nine inches—but perhaps not large enough for the nine people a dedicated Two Bedroom Villa will sleep (lock-off Two Bedroom Villas have another safe on their studio side). 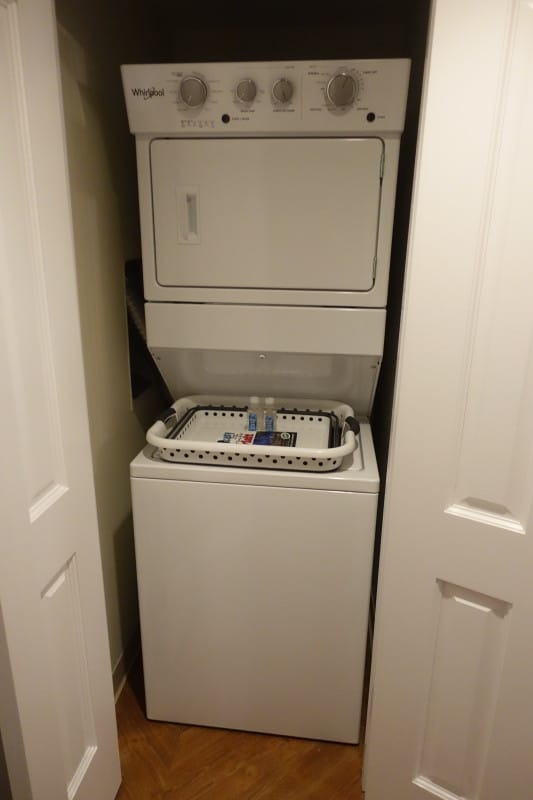 Finally on this side of the room is this washer-dryer.

There’s nothing positive I can say about the carpet design, and overall the space is  a bit austere–although not as bad as the second bedroom of dedicated Two Bedroom Villas. But the layout and amenities of this space at Disney’s Riviera Resort are top-notch, and it is as good a master bedroom/bath combo as you will find in a One or Two Bedroom Villa DVC offering at Disney World, with only the Villas at the Grand Floridian in its class.

*Actually, people staying in these rooms with DVC points rather than cash get housekeeping service only every four days—hence the cleaning supplies. Folks staying with cash get housekeeping every day. Don’t forget to tip your maid. I tip $5 per bay per night, unless we’ve made an unusual mess.

previous post Photo Tour of the Second Bedroom of a Two Bedroom Villa at Disney's Riviera Resort
next post Next Week (February 29 through March 8, 2020) at Walt Disney World
Cancel