The New Oven in The Cabins at Fort Wilderness 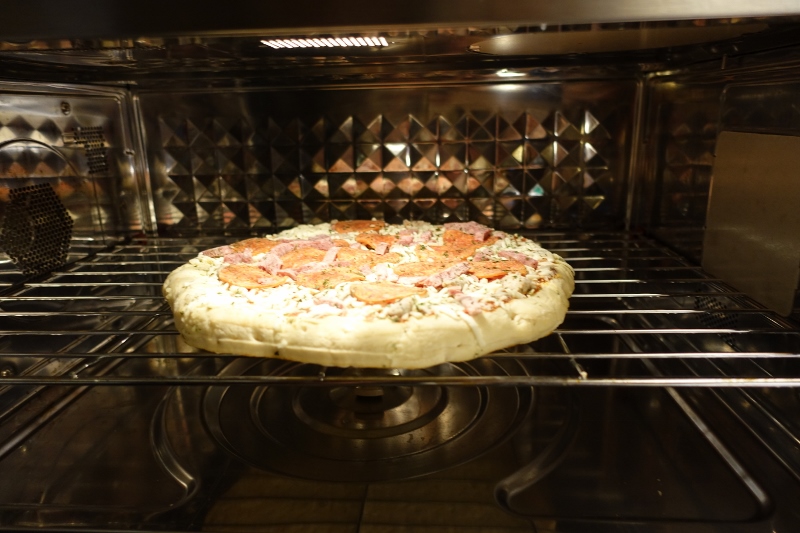 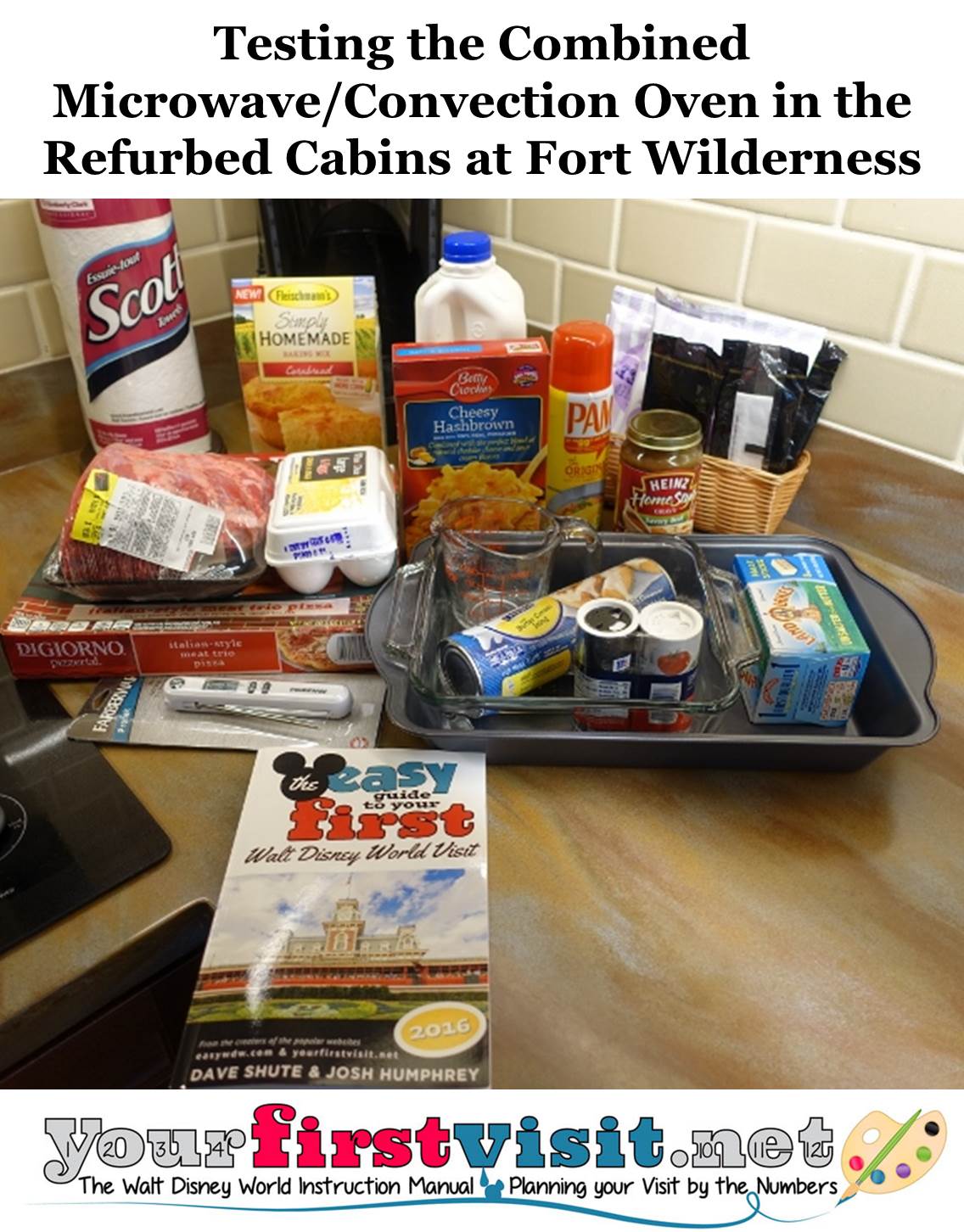 Correction: as an alert reader pointed out to me, these ovens max out at 450, not 425 as I had mistakenly thought!

The Cabins at Fort Wilderness are almost through a refurb that includes a fundamental change to the old kitchen–replacement of the old “real” oven and separate microwave with a combined microwave/convection oven.

I’d noted the overall changes to these cabins and what’s happening in the kitchen after my December stay in a refurbed cabin, and have published a full photo tour of a refurbed cabin here.

But that visit didn’t leave enough spare Cabin time to put the oven through its paces, so I stayed in a refurbed cabin longer on my January visit to Disney World–my fifth stay in one of these cute little cabins.

Disney has noted that the oven has a “limited cooking/baking capacity compared to a traditional oven.”

To find these limits, I put the oven through a number of tests–roast beef, cheesy potatoes, pizza, cornbread, and cinnamon buns–and here’s the short version of my results:

THE NEW OVEN AT THE CABINS AT FORT WILDERNESS

The old kitchen had a range with a full oven below and four burners on top, and microwave–see below. 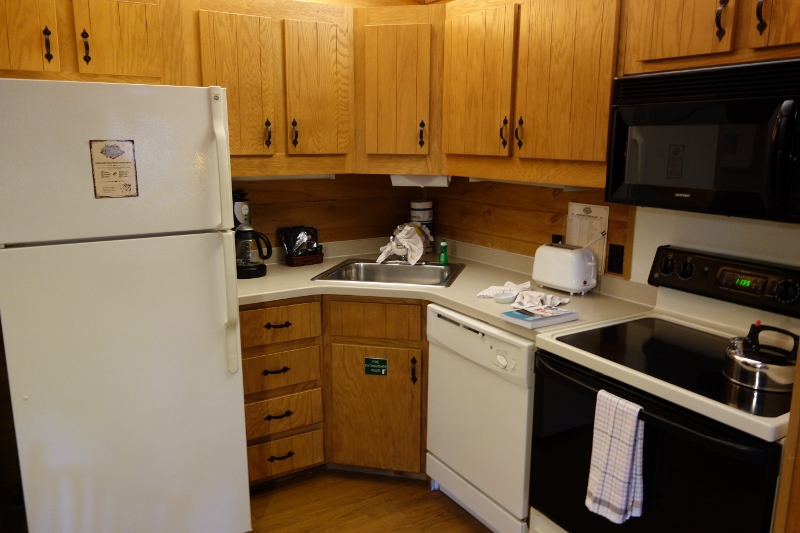 The new kitchen moves the sink out of the corner, drops two of the four burners, drops the full oven, and replaces the microwave and full oven with a combined unit, above the two burners. 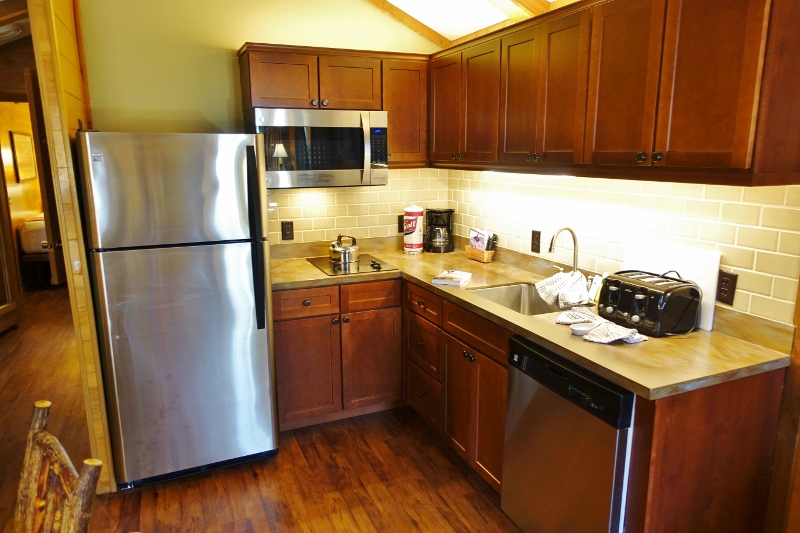 The first thing you should know is that new kitchen or old, the tools the Cabin provides you with are limited. 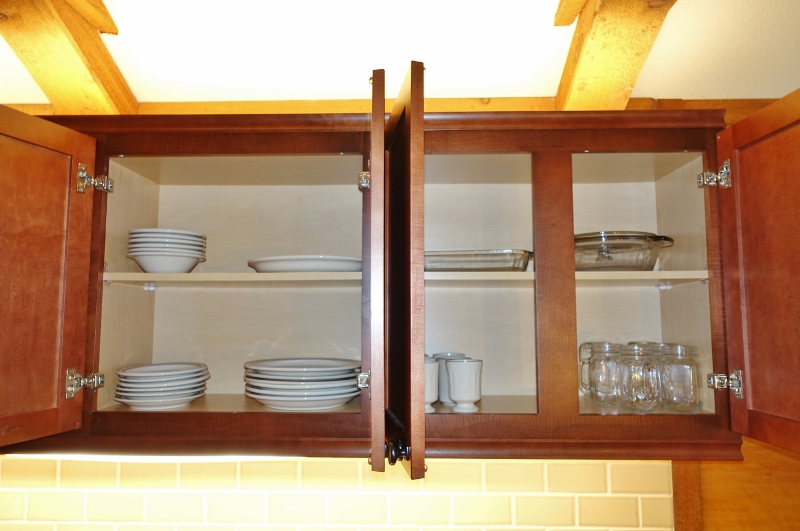 There’s two pieces of ovenware–in the upper right of the image above–a covered dish and a rectangular pan.

That’s probably enough for most families, but for my tests–so that I didn’t have to keep cleaning between them–I bought two more items, the 8×8 glass and the 9×14 metal pans that you can see in the photo at the top of the page and in various images below.

(The Cabins come with a measuring cup, but I did not remember that, so I bought another one.)

The prep implements are a little thin, and are shown in the drawer above.  You get six steak knives but no other knives, a bottle opener, can opener, corkscrew, and a plastic spoon and plastic slotted spatula.  That’s it. 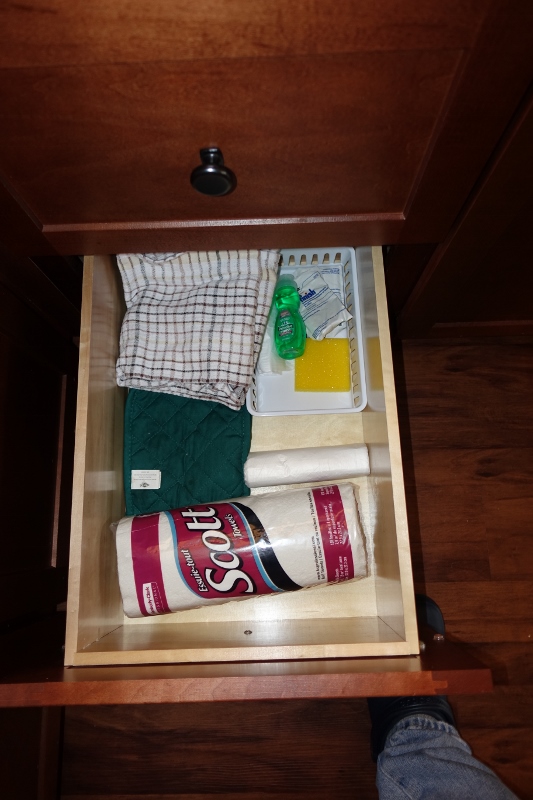 The first step in using the oven is removing the orange plastic-ware at the bottom that supports the base glass microwave platter.  I removed both to be safe, and my wife is astonished that I remembered to remove either… 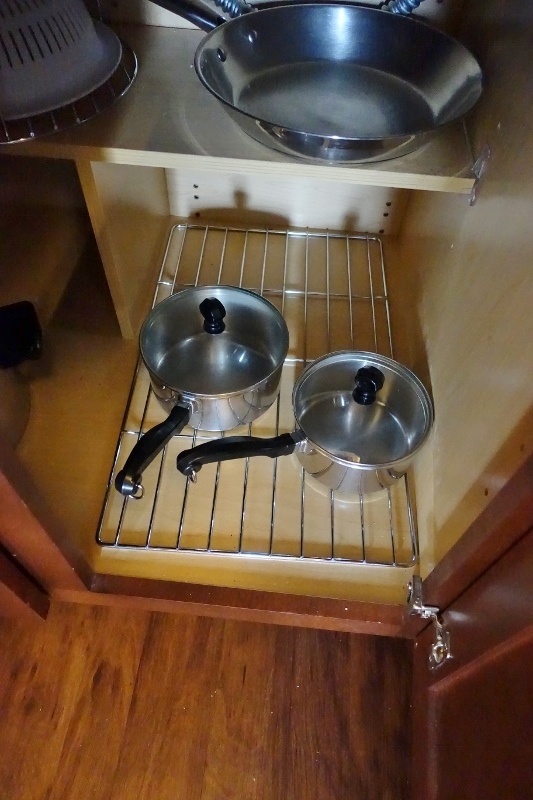 Next you find the oven rack, at the right bottom of the cabinet just below the stove… 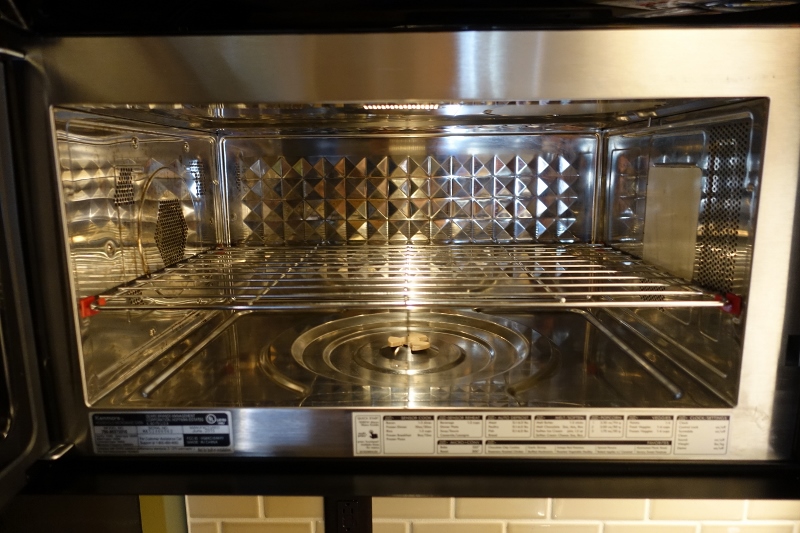 …and put it into the oven.

The oven is 21 inches long by 14 inches wide.  That’s big enough for almost anything–a standard pizza is about 11 inches in diameter–but there’s only six inches of clearance between the rack and the top of the oven, so you can’t cook any tall food. 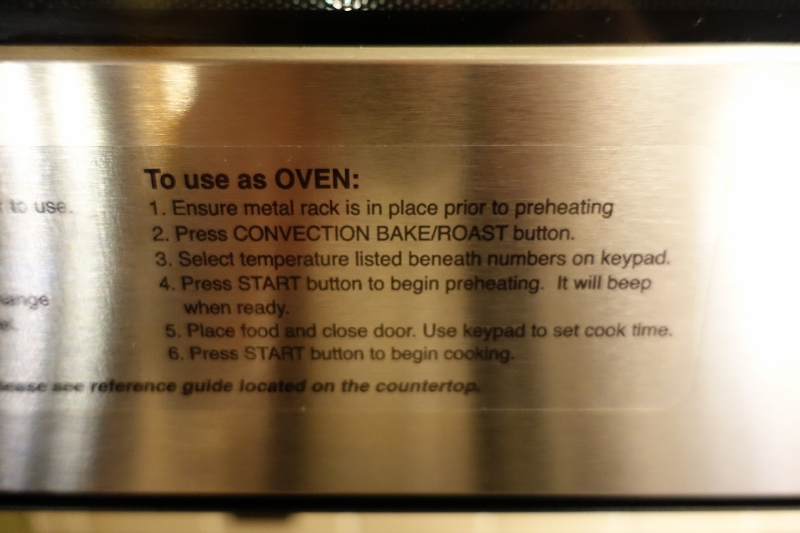 Working the oven controls is a little tricky, and I did not get comfortable with them until late in the test. The instructions are quite clear–it’s just that the steps don’t tie to usual oven workflows, and more to microwave workflows.

Here’s what you do:

2. Press the button that ties to your temperature goal.  This is not as simple as entering the three numbers. Rather, each number is assigned a temperature, and you press the one number that fits that temp: 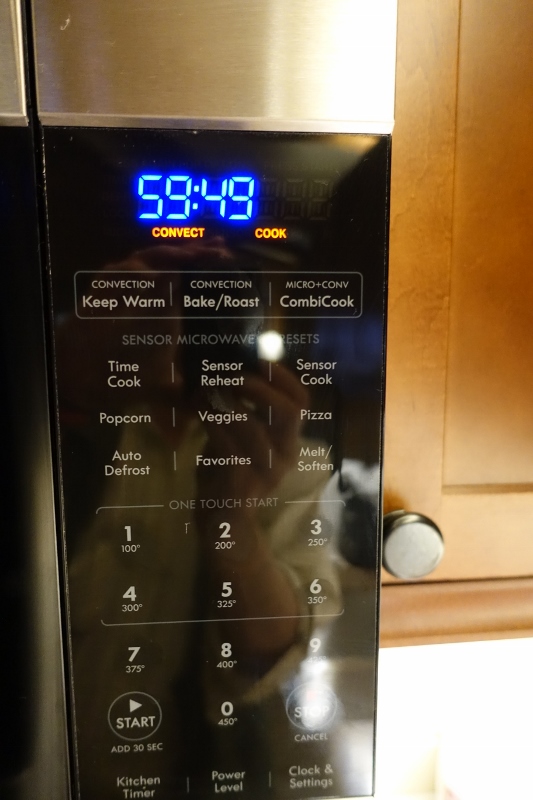 Although you can’t see it in my lousy photo, temps max out at on “0” at 450, so no broiling, and foods that are meant to cook at 475 or higher will take longer and/or brown differently than you expect.

4. The oven will ding when it has pre-heated.  You open the oven, stick your glop in, then press start again.

Everything took longer than I expected… which cost me a FastPass+. 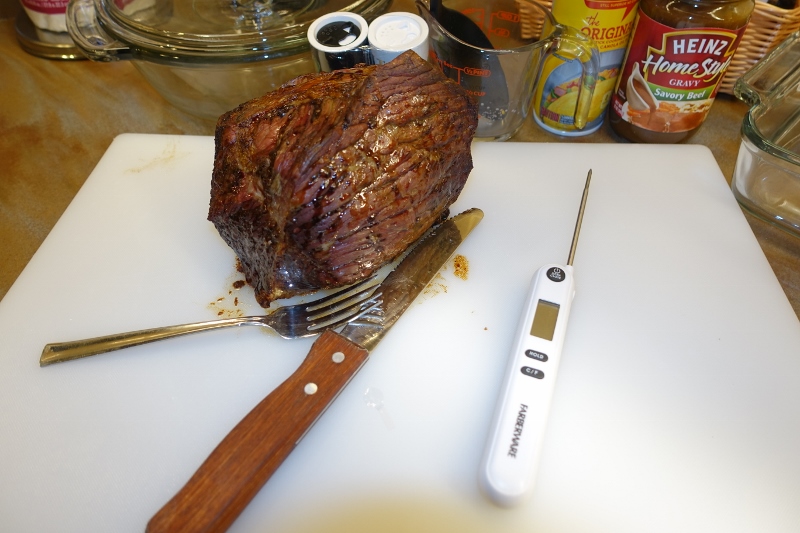 First up was a three pound roast, which turned out just fine but should have taken around an hour at 375 but rather took 90 minutes. (I bought the instant read thermometer–there’s no thermometer supplied by the cabin.) 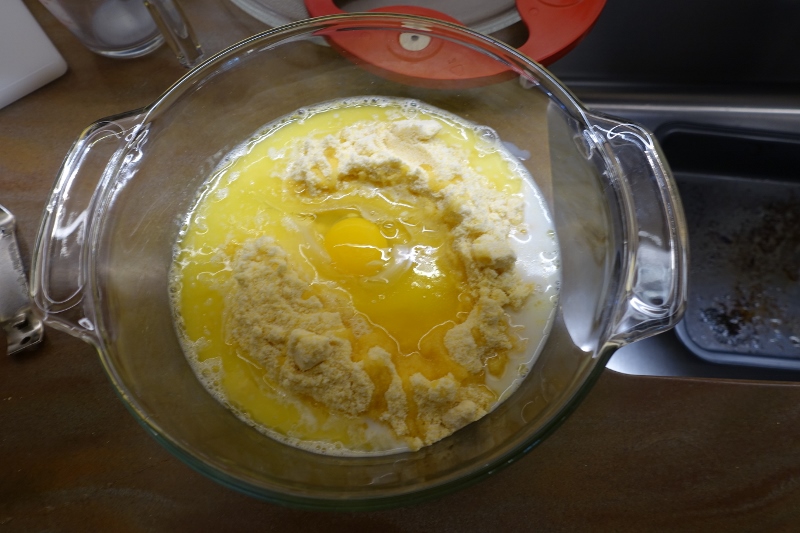 While the roast was cooking I mixed up the cornbread… 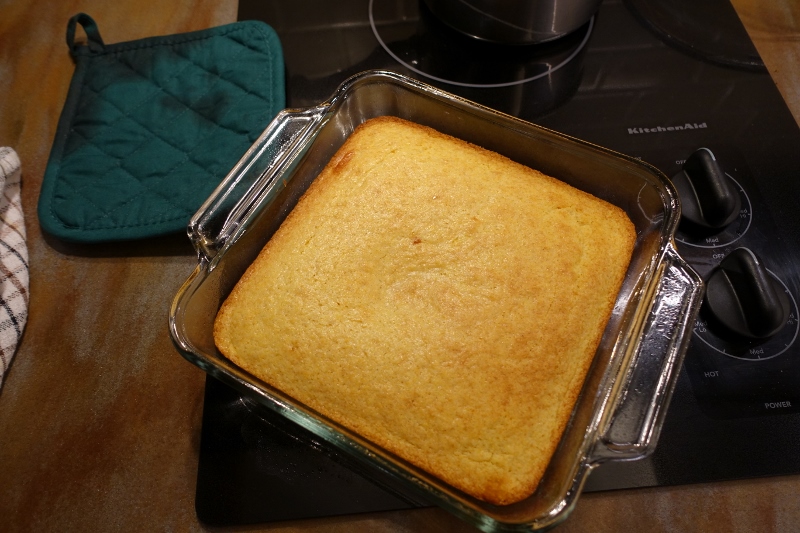 ….and ended up cooking it about 25% longer than the package instructions. The body of the cornbread was done before the top had browned to my liking, so it tended up a little dry. (Note that that’s one of the pans I bought, not a Cabin-supplied pan.)

To test the cornbread done-ness with a toothpick, you have to shut the whole system down, and then re-start all of steps 1 through 4 again.

That is, unlike an old-fashioned oven, you can’t open the door while it stays at the temperature you’ve set–you have to shut everything down to open the door, and then restart everything if your stuff needs to cook longer. 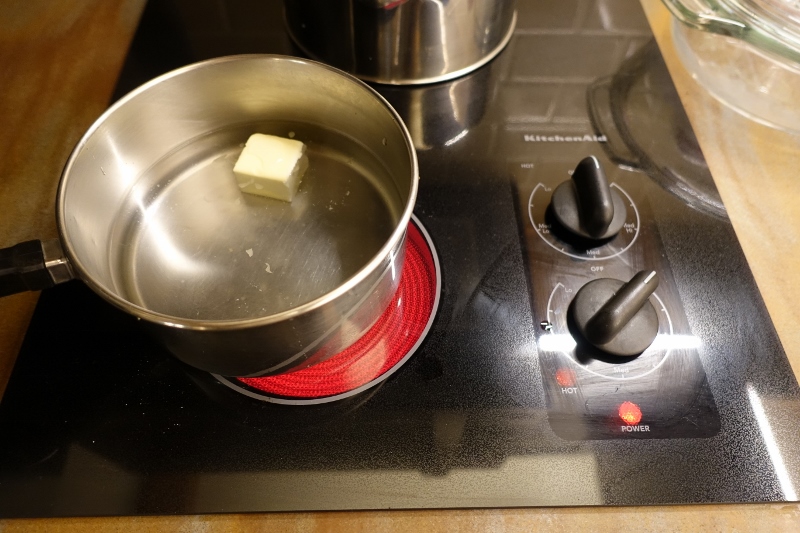 A minor note–the cornbread recipe required melted butter, but since the roast was occupying the microwave, I had to melt it on the stove.  I hadn’t melted butter on a stove for decades… 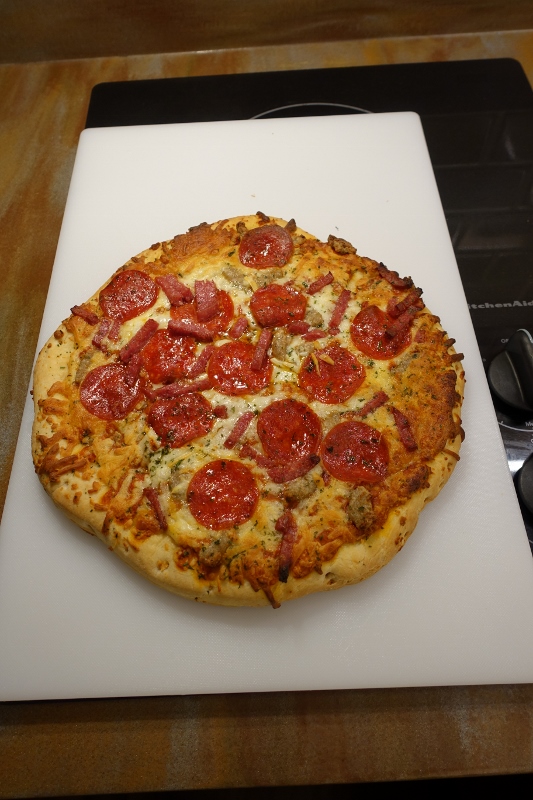 Next up was a standard frozen pizza, which took 25% longer than the package directions but turned out fine. 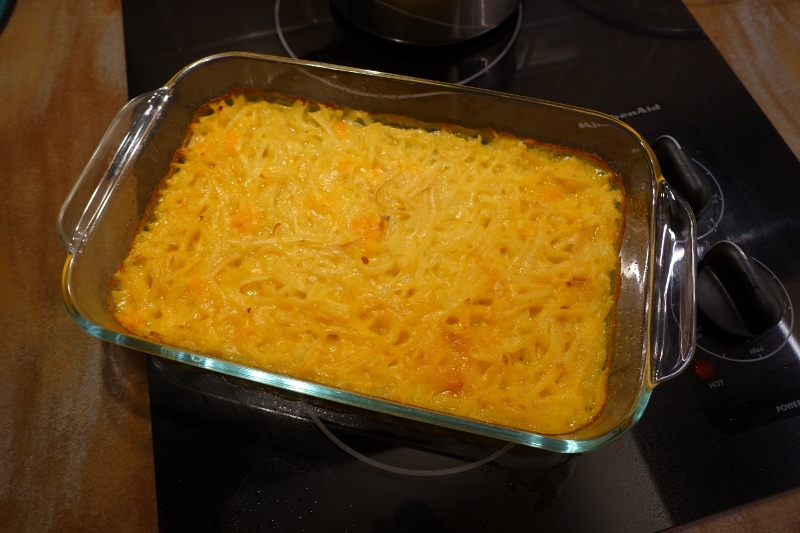 The cheesy potatoes took about 25% longer than expected. They weren’t as browned as I like them to be, but I was unwilling to let them cook longer as I didn’t want to dry them out. 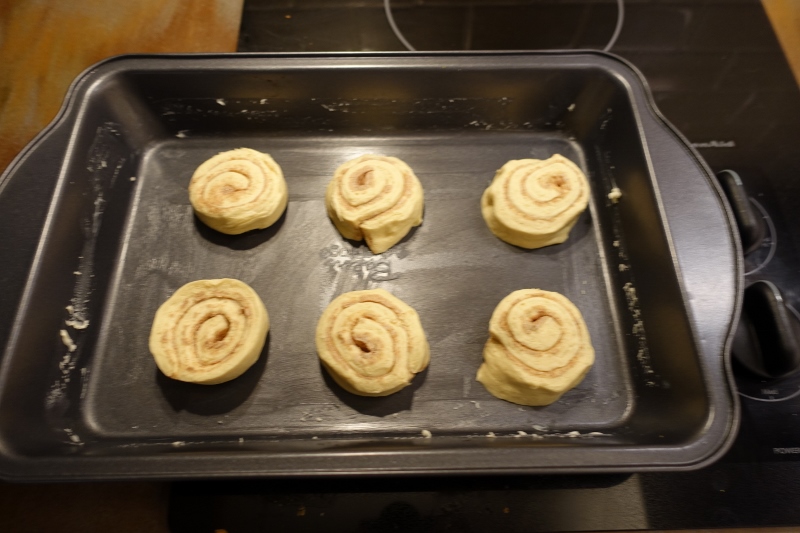 The cinnamon rolls took about 15% longer than the package directions… 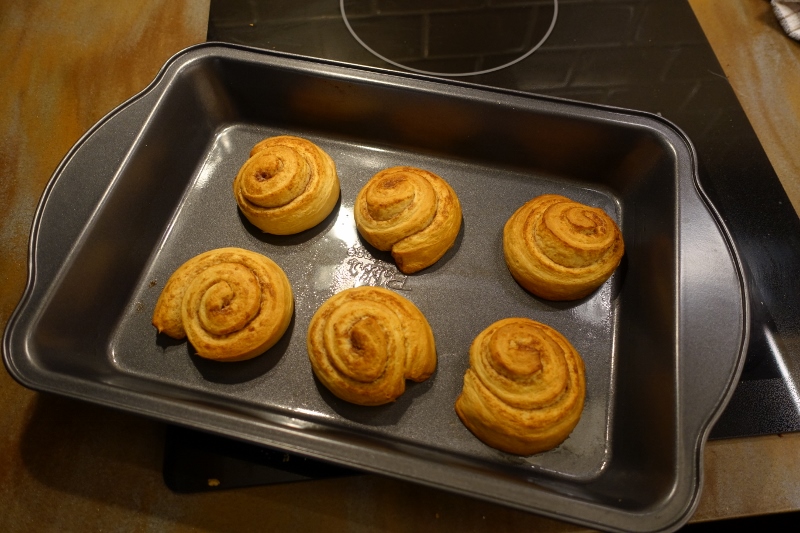 …but turned out fine (my pan, not a Cabin pan).

Frankly, I would rather Disney had left the old layout alone, and simply changed to new versions of the old appliances.

That way you could still broil and cook at 475, and roast tall food like chickens or turkeys, and would still have four burners.

But the new layout is much less cluttered, especially around the sink, and I think the two burners and less capable oven will fulfill the cooking requirements of 95%+ of families staying here. 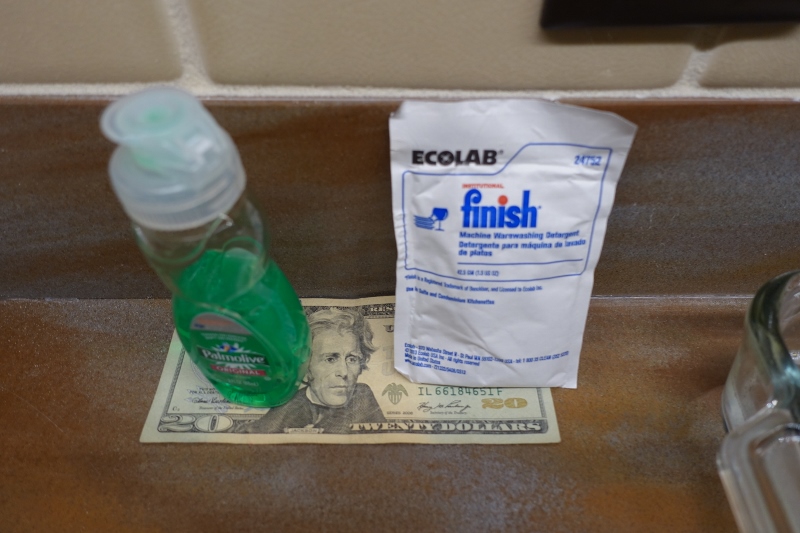 (By the way, I did leave a mess for Mousekeeping, but tried to make up for it…)

Have you used one of these ovens?  Did it work for your needs?