Photo Tour of a Studio at Bay Lake Tower 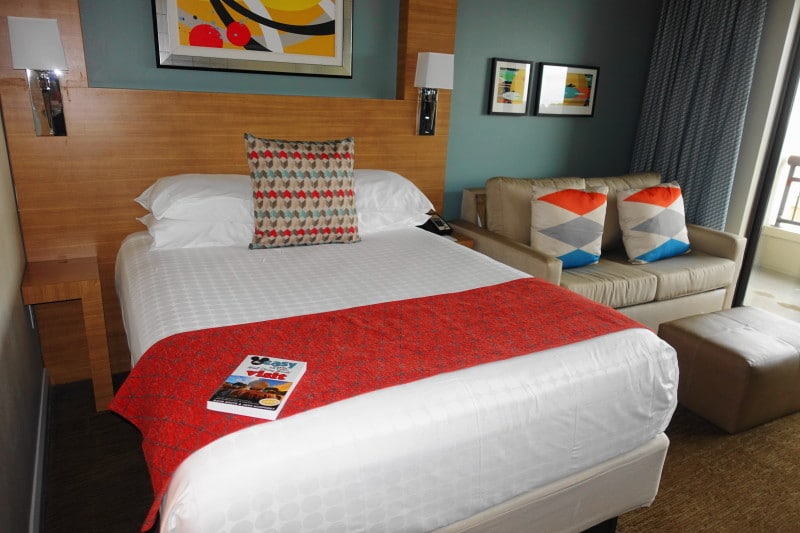 (For the first page of this review of Bay Lake Tower, see this.)

Most Disney World studios put the kitchenette on one side of the entry hall and the bath (and sometimes the closet) on the other.

However, at Bay Lake Tower studios, both the bath and kitchenette are on the same side of the room, and the kitchenette is rotated 90 degrees from its more common layout. 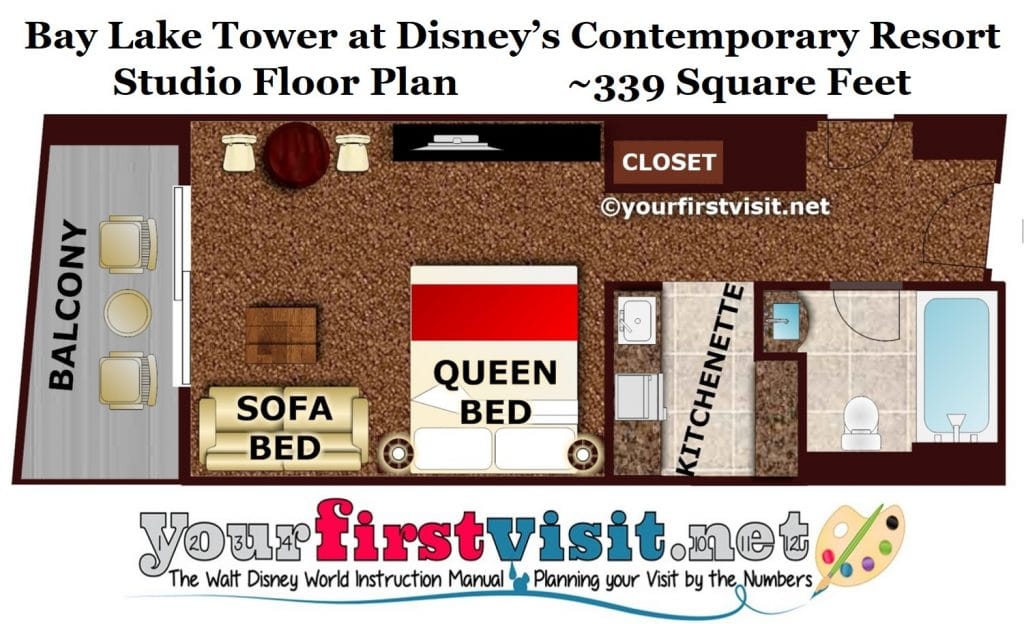 This yields wasted circulation space in the kitchenette, and a quite short living area, making these rooms hard to live in when the sofa bed is unfurled. 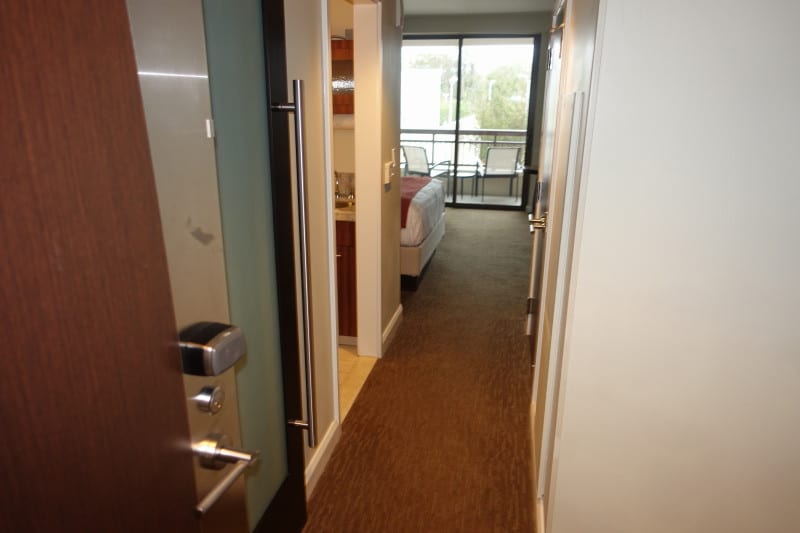 In this view of the entry to a Bay Lake Tower studio, the bath and kitchenette are on the left, and the closet on the right. 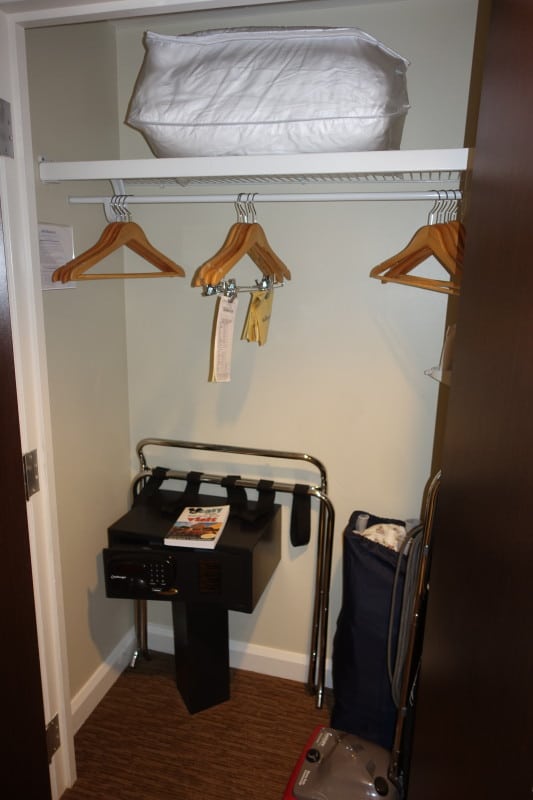 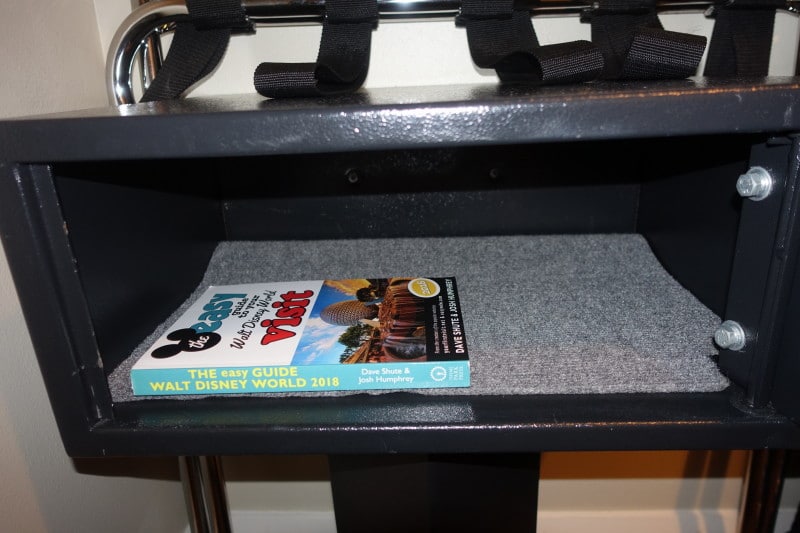 Note the large safe. My book is six by nine inches, and you could easily fit half a dozen in there–and probably should. 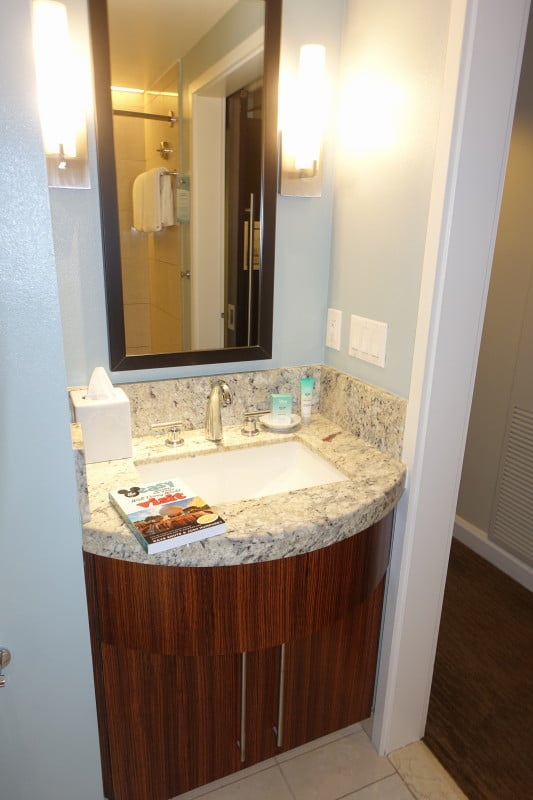 Across the hall you’ll find the bath, which includes a small sink… 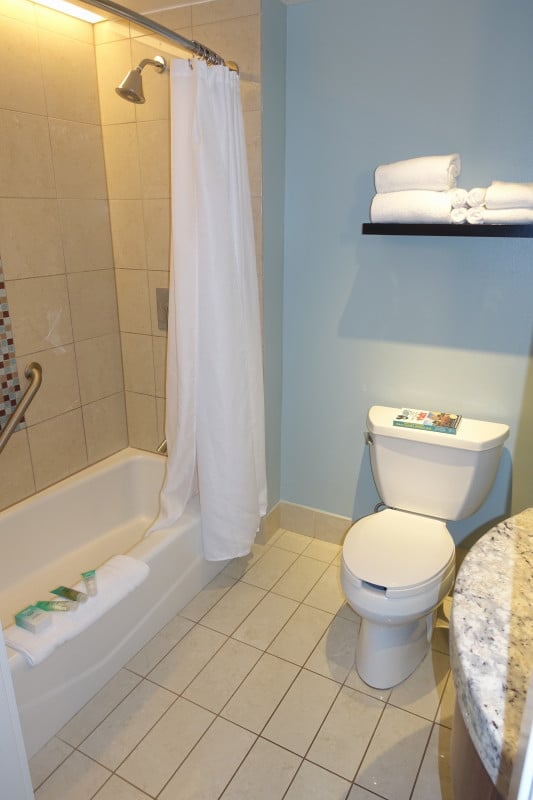 …and all the usual other stuff, all in one space.  There’s another sink just outside in the kitchenette, so it functions almost as well as a divided bath. 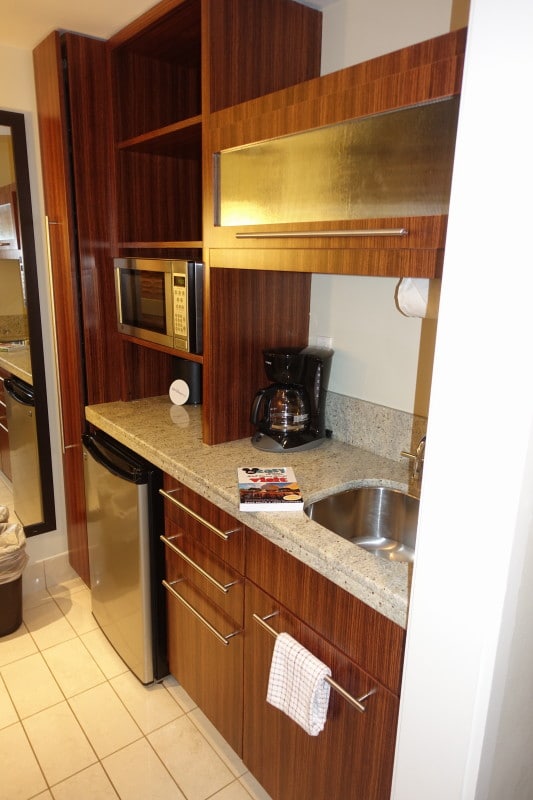 The U-shaped kitchenette has all the basics on one side. 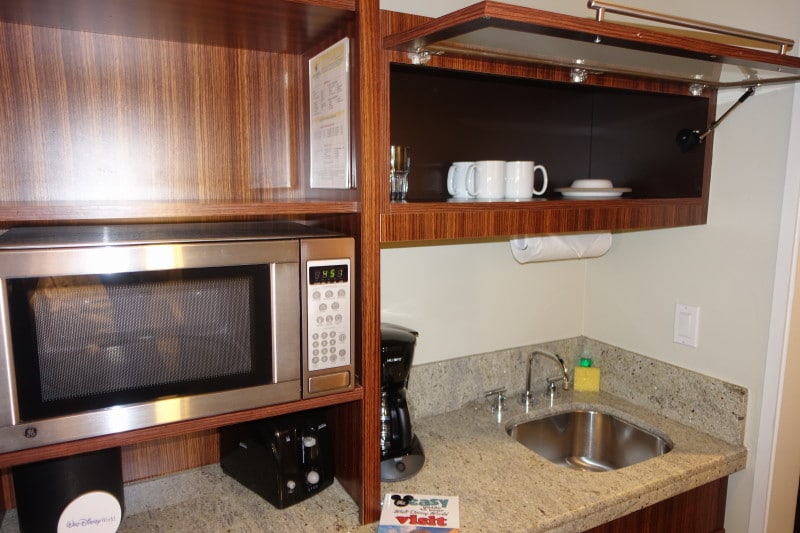 A closer view of the coffeemaker, toaster, and microwave. 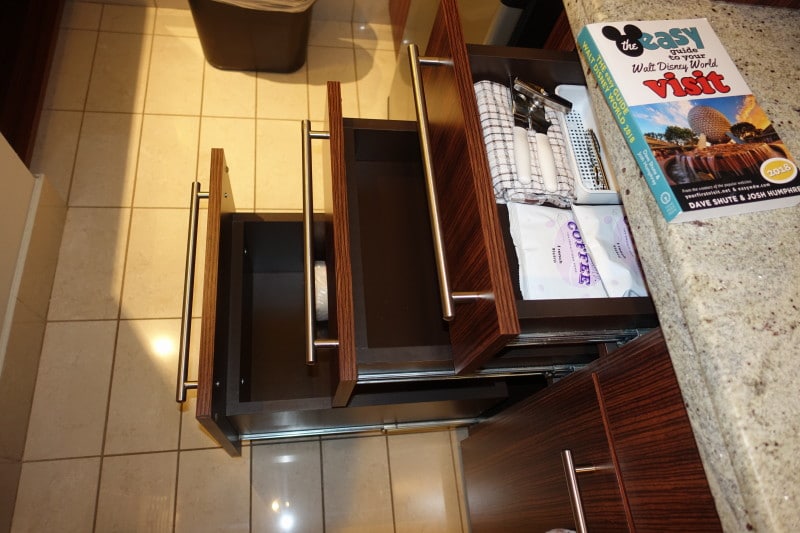 Below all this are storage drawers… 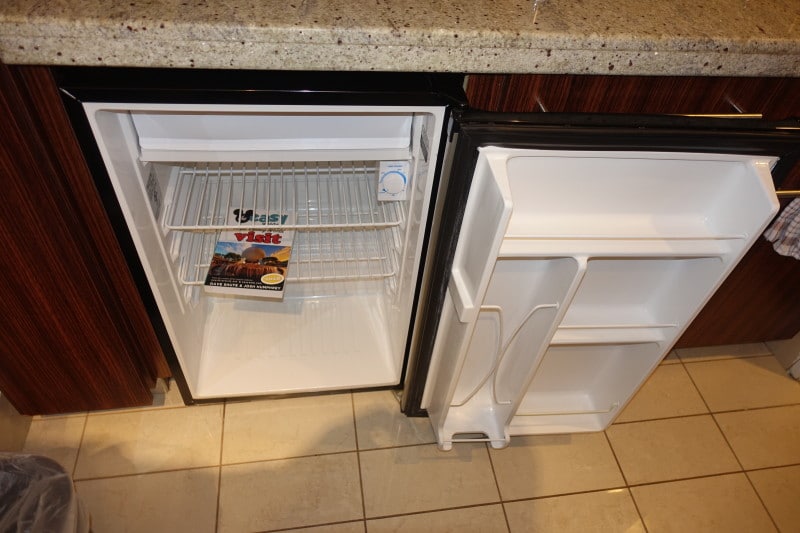 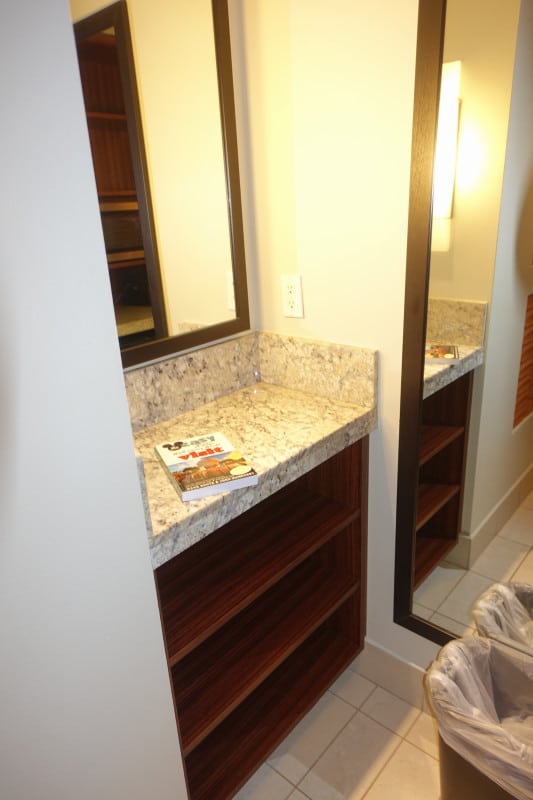 The other side of the kitchenette has storage shelves and a mirror. We don’t need to go into why there’s a blank wall to the left of the shelves and mirror–suffice it to say that it’s the relic of another design error, but one that Disney was able to fix.

Deeper in the room you’ll find the living space, with a queen bed and fold-out couch on one side. 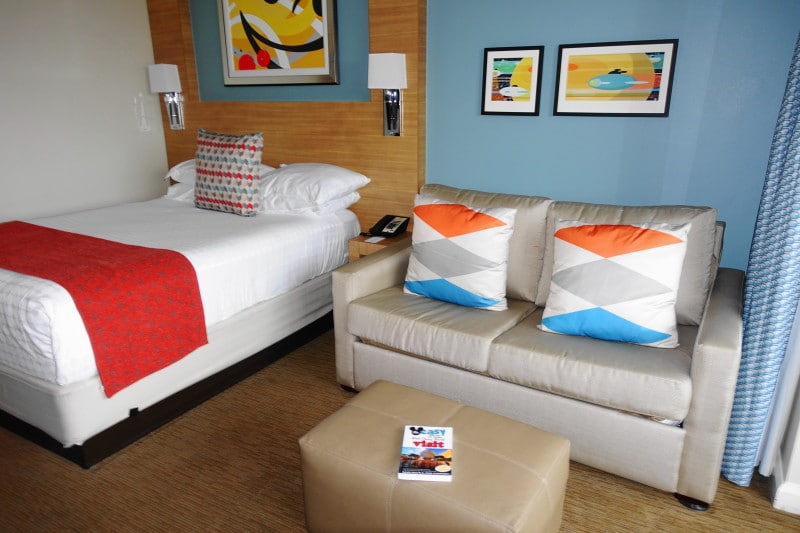 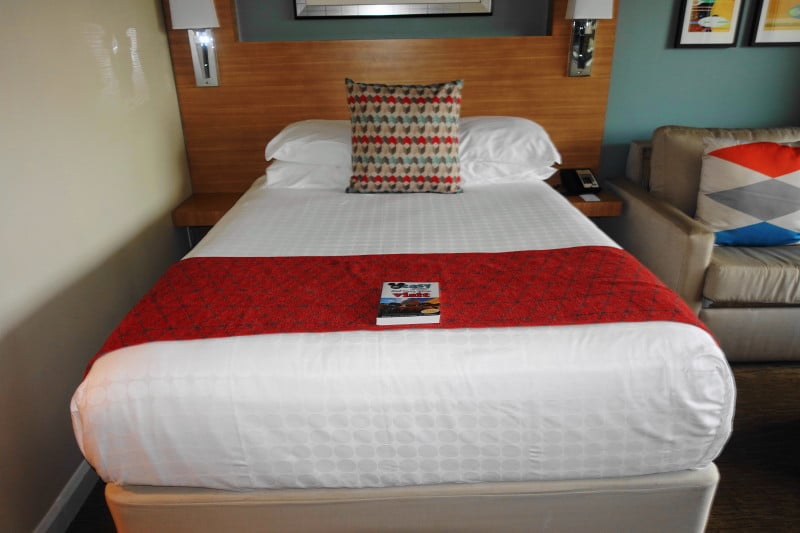 A closer view of the queen bed. Note from the last two images how tight the bed is to the wall and couch, and how tight the couch is to the curtains.  This space is 30 inches or so too narrow for what it is trying to pull off. 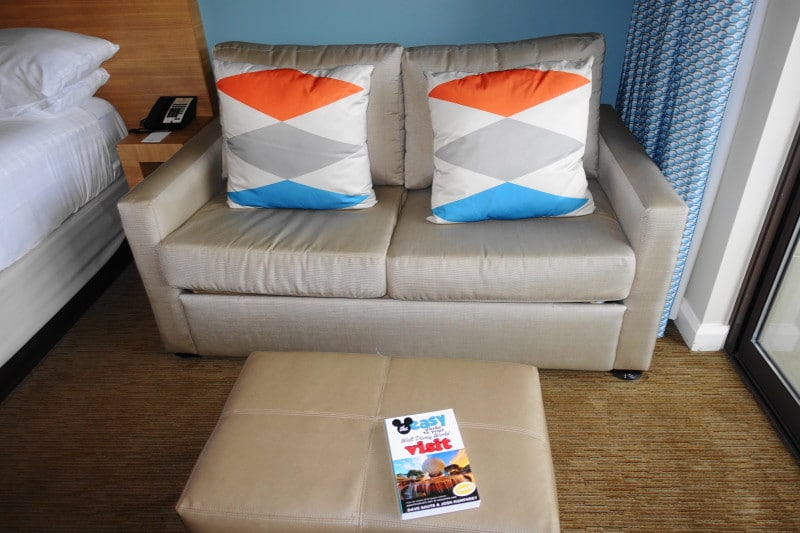 A closer view of the couch… 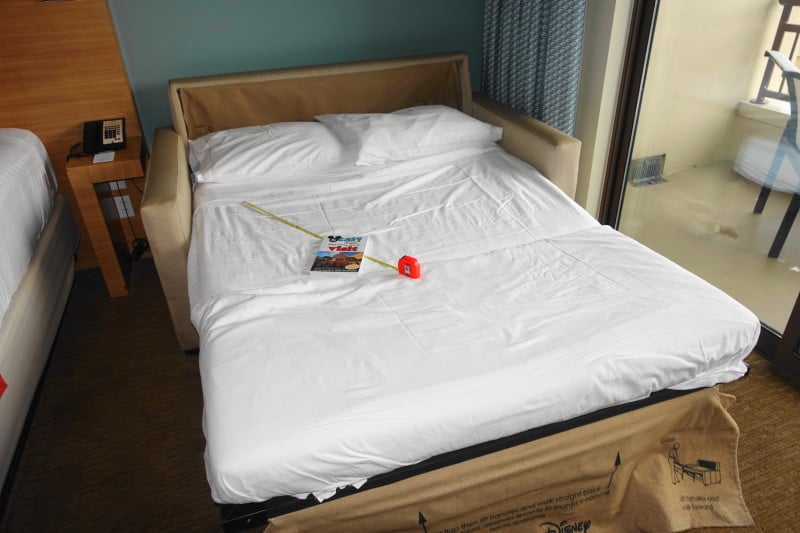 …which folds out into a full bed that I measured as 54 inches by 76 inches with a four inch thick cushion. The room is so cramped with the couch unfurled that you’d be best off booking just three in it, if the third is short enough to sleep lengthwise on the un-opened couch. 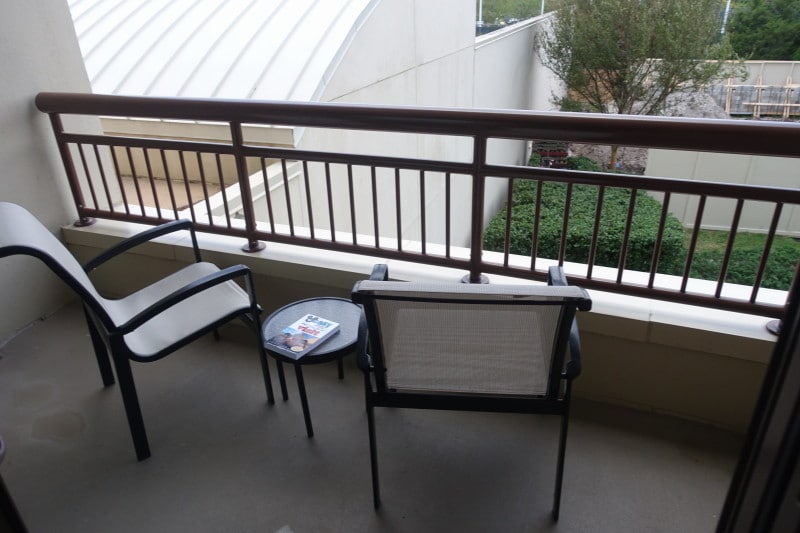 Balconies are at the end of each studio.

Bay Lake Tower rooms come with three views–Standard, Lake or Theme Park. The Lake and Theme Park Views are of Bay Lake or Magic Kingdom. Standard views are either of something else, or are so low that they can’t be defended as having a specific view.

I’ve had higher floor Bay Lake and Magic Kingdom views at Bay Lake Tower, and the views at both were terrific. 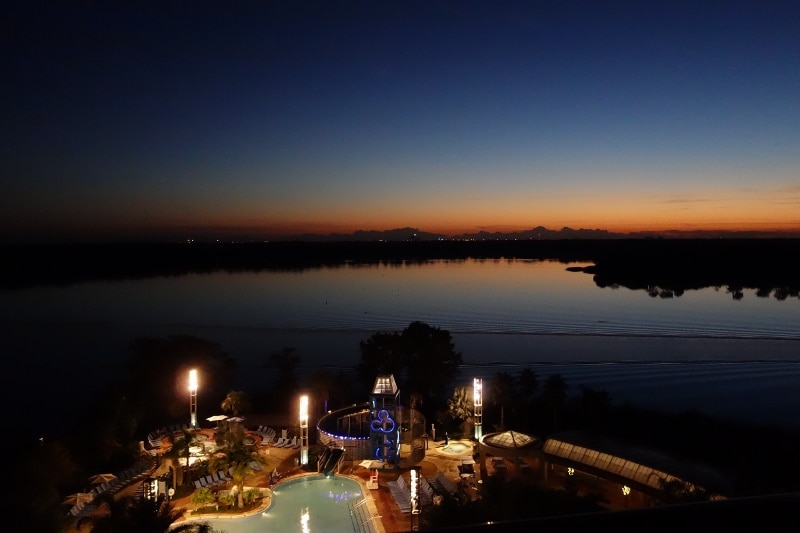 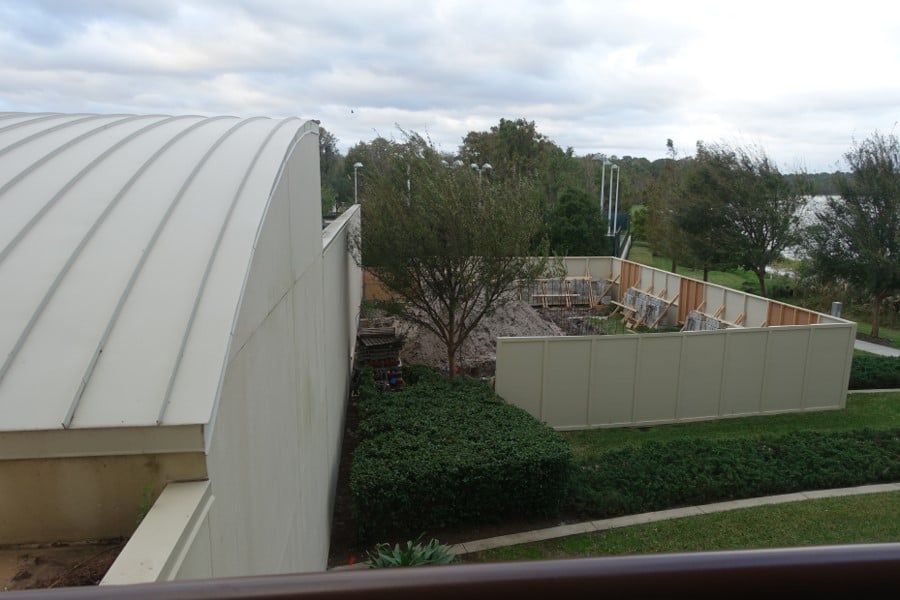 My November 2017 studio was a second floor standard view room, and the daytime view was indeed weak. 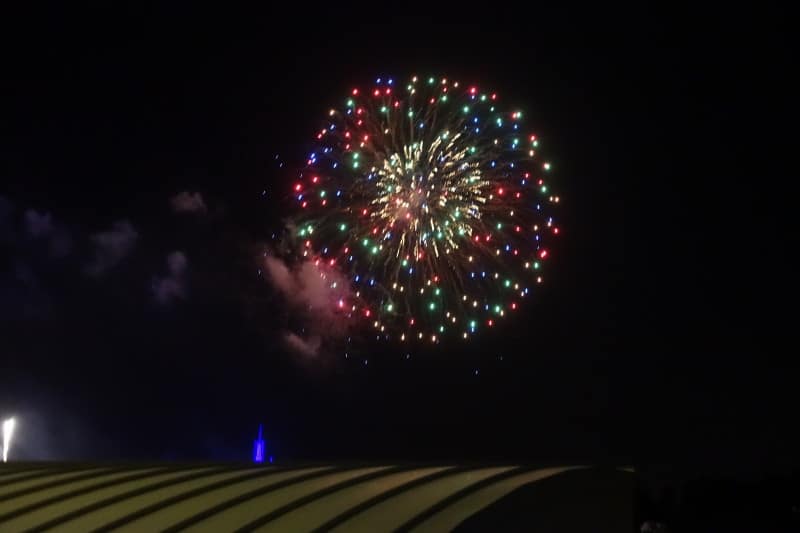 However, I actually had an OK view of the Magic Kingdom fireworks.

The other side of the room has a dresser/TV thingy and table and chairs. 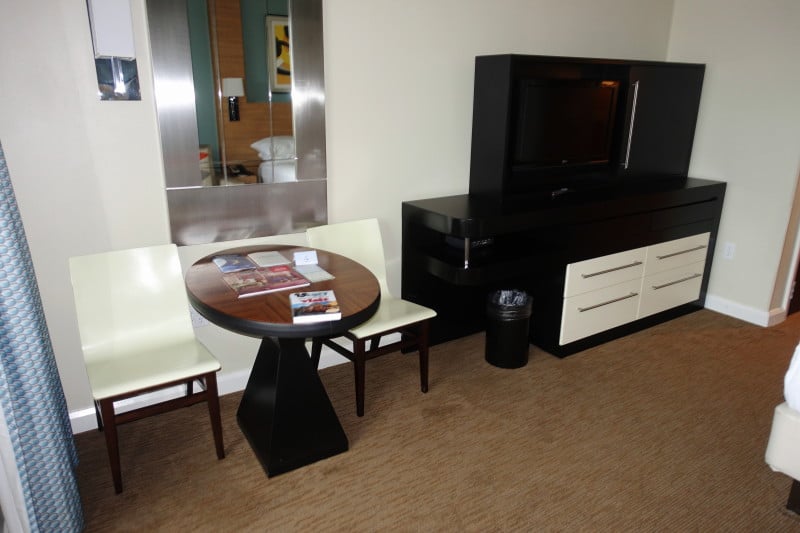 The TV side from the back. 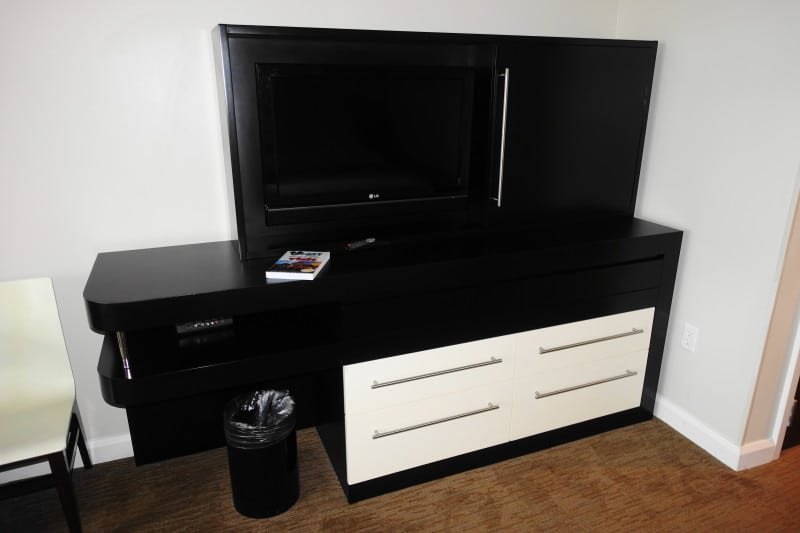 A closer view of the dresser and (small) TV. 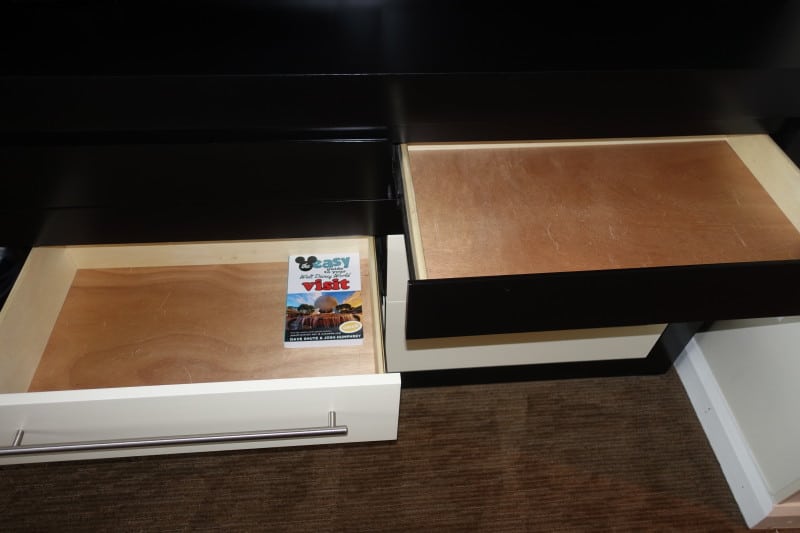 There’s six large drawers below, and shelves next to the TV. 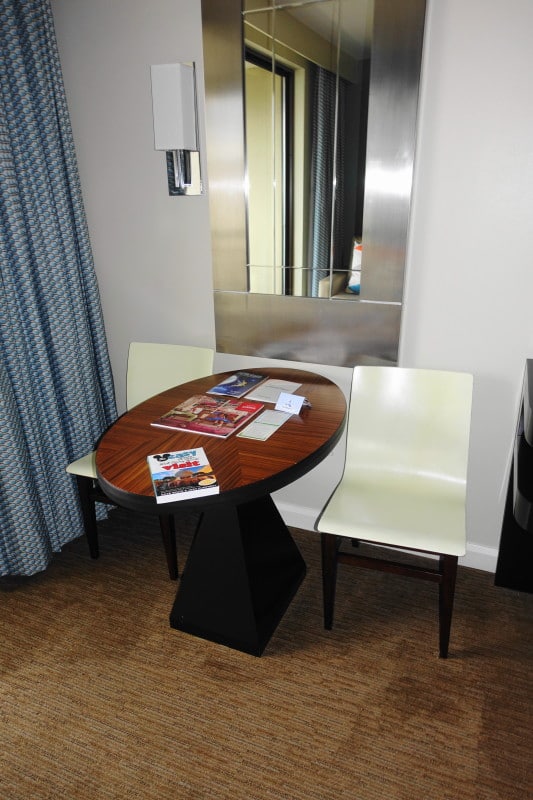 Back in the room you’ll find this table and chairs.