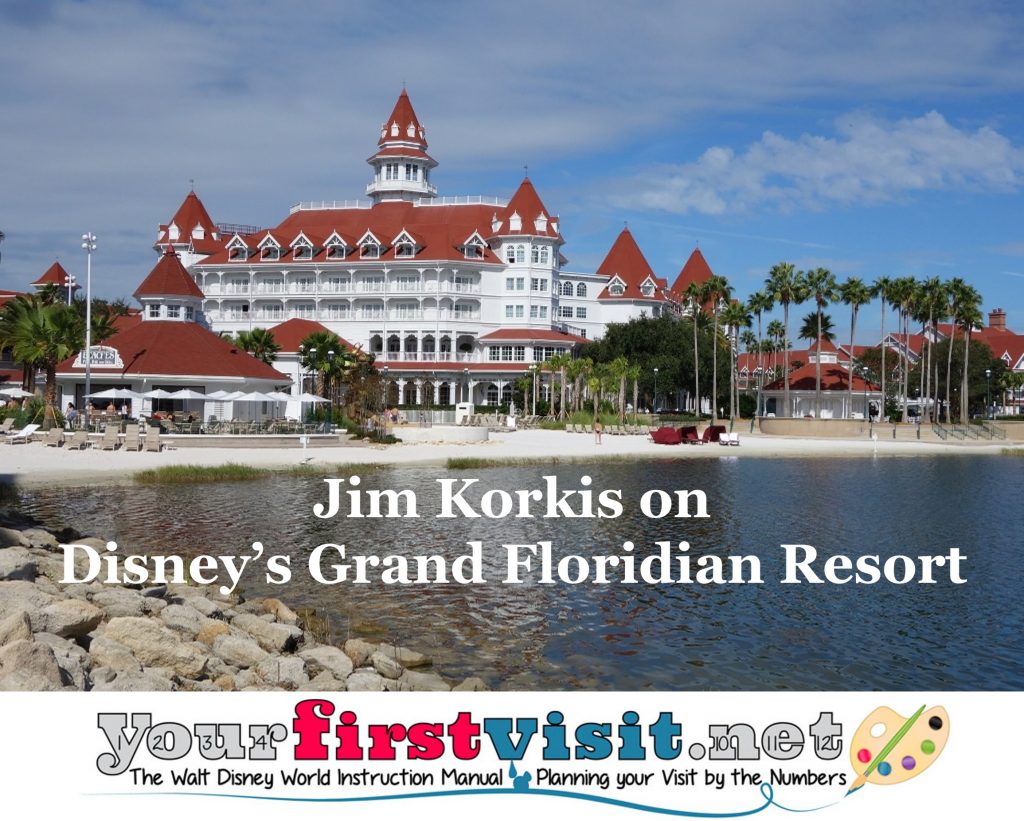 I recently wrote a book about the WDW resort hotels but I am always discovering new information so here are some fun facts that do not appear in that book.

The forty acre Grand Floridian Resort & Spa opened June 28, 1988 and the Walt Disney Company describes it as the “crown jewel of the Walt Disney World Resorts”. It is the most expensive of all the WDW resorts, not counting the new Star Cruiser Halycon, a different type of resort that is more akin to a Disney Cruise vacation.

The Beach Boys taped the music video for the 1988 song “Kokomo” on the sand of what originally was known as Disney’s Grand Floridian Beach Resort.

The gallery located near the entrance of Victoria and Albert’s restaurant features eleven original maps of Florida from 1775 up to the period of railroad tycoon Henry M. Flager’s railway lines.

The two large chandeliers in the lobby are sixteen feet tall and fourteen feet wide at the base. Each weighs approximately one ton and has forty-four candelabras.

The resort received its first AAA Four Diamond award in 1990 and has continued to earn it every year since. Its Victoria and Albert’s is one of only five dozen Five Diamond restaurants in North America.

In 2007, nearly every room received an elegant makeover with new bedding, wallpaper and furnishings. In 2008, the resort installed a custom-designed marble floor throughout the main lobby and mezzanine. It includes “hidden” Disney characters like Pluto inlaid into it.

Several episodes of the Hulk Hogan television series, “Thunder in Paradise”, were filmed at the Grand Floridian.

On Monday and Friday mornings almost fifty housekeepers do what has been known as the parasol parade. They grab beautiful parasols and, starting at the swimming pool, they stroll through the pathways of the Victorian garden in the center courtyard. They often choose one or two children to lead the parade. It started in 1988.

On October 3, 2020, the Grand Floridian Society Orchestra that had entertained guests since the resort first opened thirty-two years earlier gave its final performance. A pianist could be found during the daytime hours playing popular Disney melodies on the grand piano in the center of the first floor lobby.

During the evening hours, The Grand Floridian Society Orchestra played tunes of ragtime, Dixie, traditional jazz and Disney favorites  from the upper floor custom built bandstand. Originally, they played in the area now known as the Enchanted Rose, but when the lounge opened, they were moved to the upper floor lobby bandstand.

The sheets on all beds are changed daily, unlike other WDW resorts. In addition, the beds are also triple-sheeted which gives them a lusher feel and makes them more comfortable. Standard beds have a bottom sheet, top sheet, and blanket. A triple-sheeted bed, however, has a third sheet on top of the blanket.

The December 2021 gingerbread house in the lobby celebrating WDW’s 50th anniversary with some blue and gold trim and official logo included1,050 pounds of Honey, 140 pints of Egg Whites, 600 pounds of Powdered Sugar, 700 pounds of Chocolate, 800 pounds of flour and 33 pounds of spices.

Thanks, Jim! There’s much more on the Grand Floridian beginning here. And come back next Friday for more from Jim Korkis!