Fridays with Jim Korkis: The Cars Area at Art of Animation 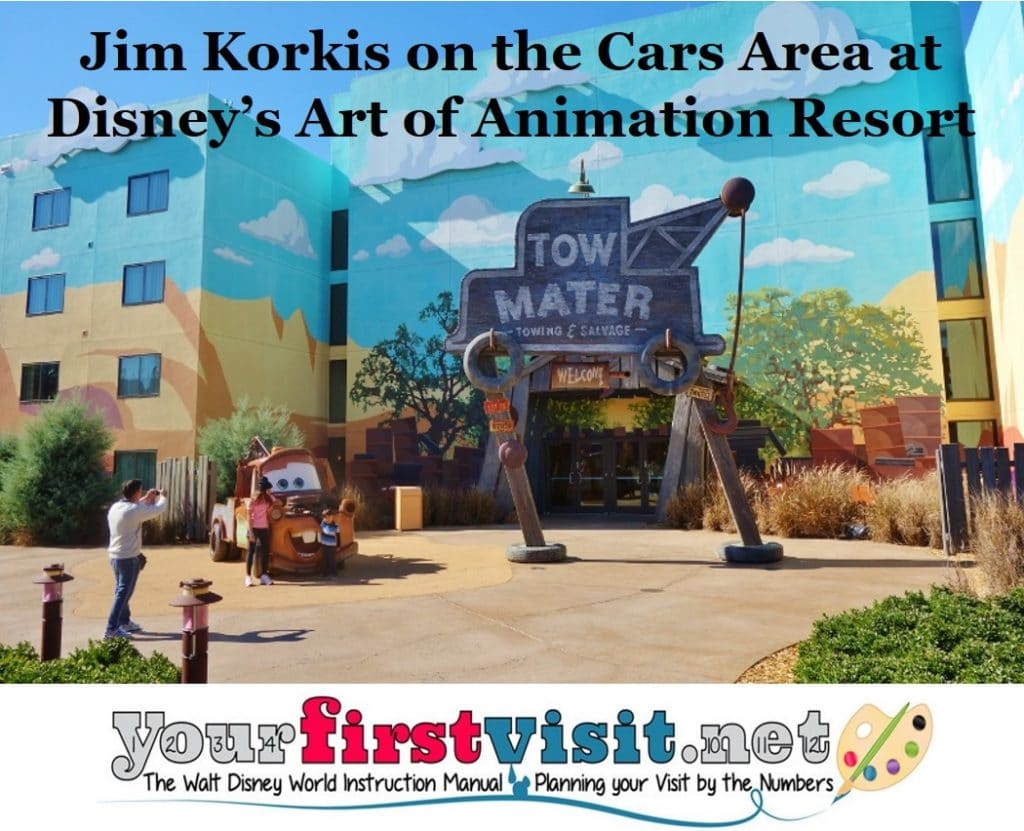 One of the four sections at Walt Disney World’s Art of Animation Resort is dedicated to the 2006 Pixar computer animated feature film Cars.

The section is painted to resemble the desert backdrop of the fictional town of Radiator Springs along the fabled Route 66. The full-sized automotive residents of the small town, like Sally, Mater, Doc, Luigi and Guido, as well as Lightning McQueen, greet guests as they walk down the freshly blacktopped road to the rooms situated in a building representing the Cozy Cone Motel from the movie.

The resort includes many references to the popular film that spawned two film sequels and tons of merchandise.

Of course, there are the beloved Hidden Mickeys in all four sections of the resort including the section devoted to Cars that has a Hidden Mickey made out of tires and hubcaps on the edges of the carpet. However the Cars section also has “Hidden Cars” in the cloud formations at the top of the buildings.

On the full-sized cars are details that are often unnoticed by guests. Like NASCAR cars, McQueen has a bunch of ads on his cars featuring parodies of human products including Gasprin and Leak Less Adult Drip Pans.

Fillmore is covered in bumper stickers with clever takes on being pro-recycling and environmentally friendly like “Pardon my back fire I eat veggie fuels”. Although Pixar is known for its 3D computer animation, Fillmore has a sticker that proclaims, “Save 2D Animation”.

Fillmore also has a registration like-sticker that mentions “Luxo.” Luxo is the official mascot of Pixar and is that little lamp you see jumping across the screen at the start of every Pixar film. Fillmore’s license plate (51237) is the birthday of George Carlin, the comedian who voiced the character. Carlin passed away in 2008, two years after the first Cars film.

Mater’s plate is A-113 and this is a reference that can be seen in some form in all Pixar films (in fact, it is the license number for all the cars in the animated feature). It refers to classroom A113 at the California Institute of the Arts where many students included John Lasseter and other future Pixar artists had classes.

Luigi’s plate strangely has the numbers 44.5-10.8 that seems to be a joke about the metric system used in his home of Italy. However, it may be a bit clever than that obvious assumption since it is also the GPS coordinates for a Ferrari manufacturing plant in Maranello, Italy.

While Flo’s SHO GIRL vanity plate may not seem all that clever, the Motorama 1957 above it is. The 1957 refers to John Lasseter’s birth year, and the Motorama refers to a wild and crazy car show that takes place every two years on the campus of Pixar.

In addition there is the Cozy Cone Pool with oversized orange traffic cones as cabanas. The rooms in the Cars section have a motel (motor hotel) “feel” where tool chests serve as drawers and storage spaces, while a map of Radiator Springs adorns the top of the coffee table.

The storyboard chandelier in Animation Hall has a storyboard drawing of McQueen signed by John Lasseter. Jerome Ranft, a character sculptor for Pixar signed a drawing of Mater tractor tipping. Pixar artist Josh Cooley autographed the drawing of Lightning McQueen chasing down Chick Hicks and The King.

In that drawing McQueen is numbered “57” instead of the number “95” he was in the film. Originally McQueen was going to be “57”, a reference to Lasseter’s year of birth but it was eventually changed to “95”, the year Toy Story debuted.

Thanks, Jim! There’s much more on Disney’s Art of Animation Resort here. And come back next Friday for more from Jim Korkis!